We have Attila the Hun to thank for Venice. When his rampaging hordes entered northeast Italy in the 5th century AD upon the collapse of the Roman Empire, the locals took refuge on a hundred or so flat, marshy islands out in the lagoon at the edge of the Adriatic Sea. A network of bridges and causeways gradually linked many of the islands and, to ensure a quick getaway by water, the inhabitants built a network of canals instead of streets.

The unique city of Venice became a maritime and trading powerhouse, lavishing its mercantile wealth on fabulous art and architecture. Along one of the world’s most famous waterways, the Grand Canal, you will find half a dozen world class art museums. Some are literally lapped by waves from passing ‘vaporettos’, ‘motoscafos’ and, yes, gondolas, with some of the best canal-side cafe locations in all of Venice.

Towards the north end of the Grand Canal, the Ca’ Pesaro International Gallery of Modern Art contains the municipal collection, which was started in 1897, the year of the second Biennale. Better known as Ca’ Pesaro after the family which built the 17th century palace which houses it (‘ca’ means ‘house of’), the museum’s collection was enriched over the years by further donations and acquisitions, often acquired at the Biennale.

Works by many household names are included, such as De Chirico, Calder, Klee, Miro, Ernst and Kandinsky. Particularly moving is Angelo Morbelli’s sombre and sobering The Christmas of Those Left Behind (1903), while Joaquin Sorolla y Bastida’s magnificent ‘Sewing the Sail’ (1986) is a masterclass in capturing light.

Next stop down the canal is Ca’ Rezzonico, with its sumptuous entrance hall to rival Versailles and a ceremonial staircase connecting the display floors. Upon its completion in 1756, the most important painters in Venice were called upon to decorate it with frescoes and trompe l’oeil works. The collection of ceramics, tapestries, furniture, objets d’art, mirrors and statuary give a peek into an aristocratic, 18th century Venetian lifestyle. Look out for a massive, 20-candle Murano glass chandelier decorated with delicate glass flowers.

In contrast to the rest of the building, the top floor has a more contemporary feel, with polished floors and soft, modern lighting falling on a superb collection of 16th and 17th century paintings.

Directly opposite Ca’ Rezzonico on the other side of the Grand Canal is Palazzo Grassi. Owned by the billionaire French collector Francois Pinault (owner of Gucci, Yves Saint Laurent, Christie’s et al), the Palazzo Grassi presents major contemporary exhibitions in its 40 rooms. Featured artists have included Picasso, Irving Penn, Martial Raysse, Luc Tuymans and Damien Hirst, whose Treasures from the Wreck of the Unbelievable was the talk of the 2017 Biennale. Other shows are drawn from the Pinault Collection.

The Gallerie dell’Accademia is a temple to some of the greats of pre-19th century art, many of whom influenced the whole history of European painting. The rich collection ranges from Byzantine and Gothic 14th century paintings to artists of the Renaissance to 18th century masters. Highlights include triptychs by Hieronymus Bosch, religious studies by Bellini and Tintoretto, iconic scenes of Venice by Canaletto and allegorical and mythological works by Titian.

Add to the sombre subject matter of many of the works (crucifixions, martyrs of saints and various other violent deaths) the low level lighting and heavily wood-panelled walls, and it all makes for a rather oppressive, even sinister atmosphere. However, it would take a hard heart not to be impressed by the stupendous ceilings in the upper floors.

After showing her collection of Cubist, Abstract, Surrealist and Expressionist work at the Venice Biennale in 1948, the American collector and socialite Peggy Guggenheim (1898-1979) bought the Palazzo Venier dei Leoni, an 18th century palace still to be completed (which explains its rather stunted appearance) and developed it into the Peggy Guggenheim Museum. Entered through a charming sculpture garden, it is one of the finest small art museums in the world and one of the most visited attractions in Venice.

A list of artists represented in the permanent collection reads like a Who’s Who of 20th century greats. Ernst (phantasmagorical figures in The Antipope and Attirement of the Bride), Magritte (Empire of Light), Miro (Seated Woman II), Motherwell, Stella, de Kooning, Chagall, Rothko, Dubuffet, Warhol (Flowers), Calder (an intricate bedhead made for Guggenheim’s four-poster bed, complete with a photo of Peggy lying on it), Picasso, Dali, Pollock –they’re all here in a stand-out collection in any city.

A sister museum of the Palazzo Grassi, the  Punta della Dogana is named after the tip (punta’) of the Dorsoduro district and the former customs (‘dogana’) building. A major refurb retained the soaring, bare brick interior walls around cavernous halls, while adding polished concrete floors, making for the feeling of a modern ‘art warehouse’. The windows at the ‘punta’ offer some of the best views from an art gallery anywhere in the world – on one side, up the Grand Canal and across to Saint Mark’s and on the other side over to the neighbouring island of Giudecca.

Venice’s largest church, the Santa Maria Gloriosa dei Frari, or simply the Frari, houses paintings and sculptures by a host of Italian masters, notably Titian’s Assumption of the Virgin (the church is dedicated to Mary), the largest panel painting in the world. The artist himself lies in his Carrara marble tomb.

Nearby the interior of the Scuola Grande di San Rocco is decorated with over 60 paintings still in their original settings by Tintoretto and his studio. Completed between 1564 and 1587 include his Annunciation and Flight into Egypt. (‘Scuole’ – schools – are artistic brotherhoods which have preserved a treasure-trove of works.for example, )

Over the centuries, Venice has drawn composers like a magnet and churches, as well as ‘palazzi’ and other venues, are also superb places to hear an orchestral or choral performance, often of works which received their premieres in the very same places with the performers wearing the historical costumes of the day. The Church of Santa Maria della Pieta, also known as “Vivaldi’s church”, frequently presents the maestro’s music.

The festival is spread over two locations: the Giardini (Gardens), the original, picturesque site resembling an Olympic Park for art with permanent national pavilions designed by the likes of Gerrit Rietveld (Netherlands) and Alvar Aalto (Finland) and with a huge mixed exhibition in the Central Pavilion; and the Arsenale, the great 16th century shipyard where the Venetian empire built and launched its fleet. In addition, dozens of ‘collateral’ events, from museum quality exhibitions to pop-up shows, are dotted around the city in palaces, deconsecrated churches and other buildings. 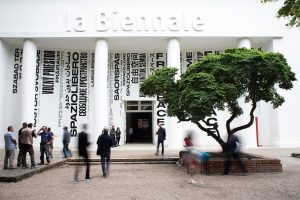 The Central Pavilion at the Biennale

First-time visitors to the Biennale will be struck at how the lines between art, music, poetry, film, literature, performance, installation, soundscape, text, video, politics and social commentary have been blurred. Inevitably, a visit to the Biennale can become an endurance test and good intentions to give every contribution a fair look tend to fade under the sheer scale of it all and making it to the finishing line becomes the main aim. After a while one sign finally causes the heart to soar. It says ‘Cafe’.

If time permits, take an excursion to some of the outlying islands. Water-buses ply the northern lagoon and an all-day pass gives passengers on-off privileges. There are also great views across the lagoon to the Venice skyline. On the way out to the first inhabited island, Murano, the boat passes San Michele, the cemetery island. The residents are just passing through; after twelve years, skeletons are moved to an ossuary to allow more Venetians to be buried in their place. 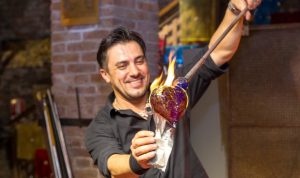 Murano is famed for its glass-making foundries and gift shops stocked with a bewildering choice of items. The quality varies widely from tourist tat to highly collectable pieces. Some factories allow visitors to observe the skilled workers from a safe distance. The Museo del Vetro (Glass Museum) traces the history of the craft with some remarkable exhibits.

Further on is Burano with its trademark multi-coloured houses. Burano’s gift to the world is its intricate lace, and the Museo del Merletto (Lace Museum) contains many beautiful examples. Across the square, the church of San Martino even has its own leaning tower. At the Trattoria al Gatto Nero (Black Cat) restaurant the ‘padrone’ has decked his walls with a collection of Burano scenes rendered by visiting artists, often in exchange for a meal.

A gondola is a thing of beauty. The construction specifications are precise and unchanged since 1630, including colour, cushion material, rowlock design and gondolier uniforms. The seven prongs of the comb-like prow represent the six ‘sestieri’ (the districts which make up Venice) plus Giudecca, the “honorary sestiere” on the other side of the broad canal of the same name. The prow also features the eye of the Republic of Venice and is topped by the Doge’s cap, while the broad curve is either the Grand Canal or the executioner’s sword, depending on which boat-builder you speak to. 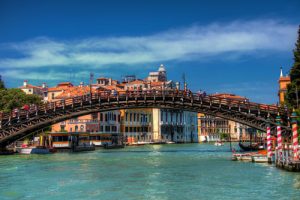 The oldest of four bridges spanning the Grand Canal, the Rialto Bridge is the most famous in the city. Completed in 1591, the covered structure is lined on both sides with souvenir shops. Named after the nearby Academy of Fine Arts, the wooden Accademia Bridge, opened in 1933, stands in contrast to stone-built crossings throughout the city.