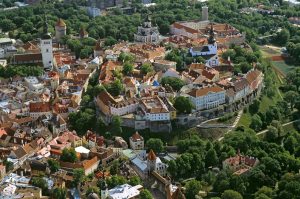 The art scene was kick-started in 2011, when Tallinn shared the title of European Capital of Culture with Turku in Finland. The subsequent regeneration of derelict industrial areas and shipyards into cultural hubs has resulted in a lively contemporary art scene and a collaborative creative environment. Said one local: “It’s great to be an artist in Estonia.” All the main institutional art museums are operated under the banner of the Art Museum of Estonia. This year they combined with independent organisations for the inaugural Tallinn Biennial, which featured responses to the last 18 months. The 2023 theme, Animistic Cosmologies, will explore the other-worldy.

On the cobbled Short Leg Street, which since medieval times has connected the upper and lower towns, the Adamson-Eric Museum is dedicated to one of the most versatile Estonian artists of the 20th century. Adapting his artist name from his birth name of Erich Karl Hugo Adamson, Adamson-Eric (1902-1968) was mainly known as a painter, but was also skilled in many fields of applied art, such as leatherwork, textiles, ceramics, metalwork and woodwork. His work embraced Surrealism, Cubism, Estonian folk art, the plastic arts, landscape, portraiture, still life, furniture design, tapestry and gold and enamel jewellery. His wallpaper designs have been used in the offices of the President of Estonia. 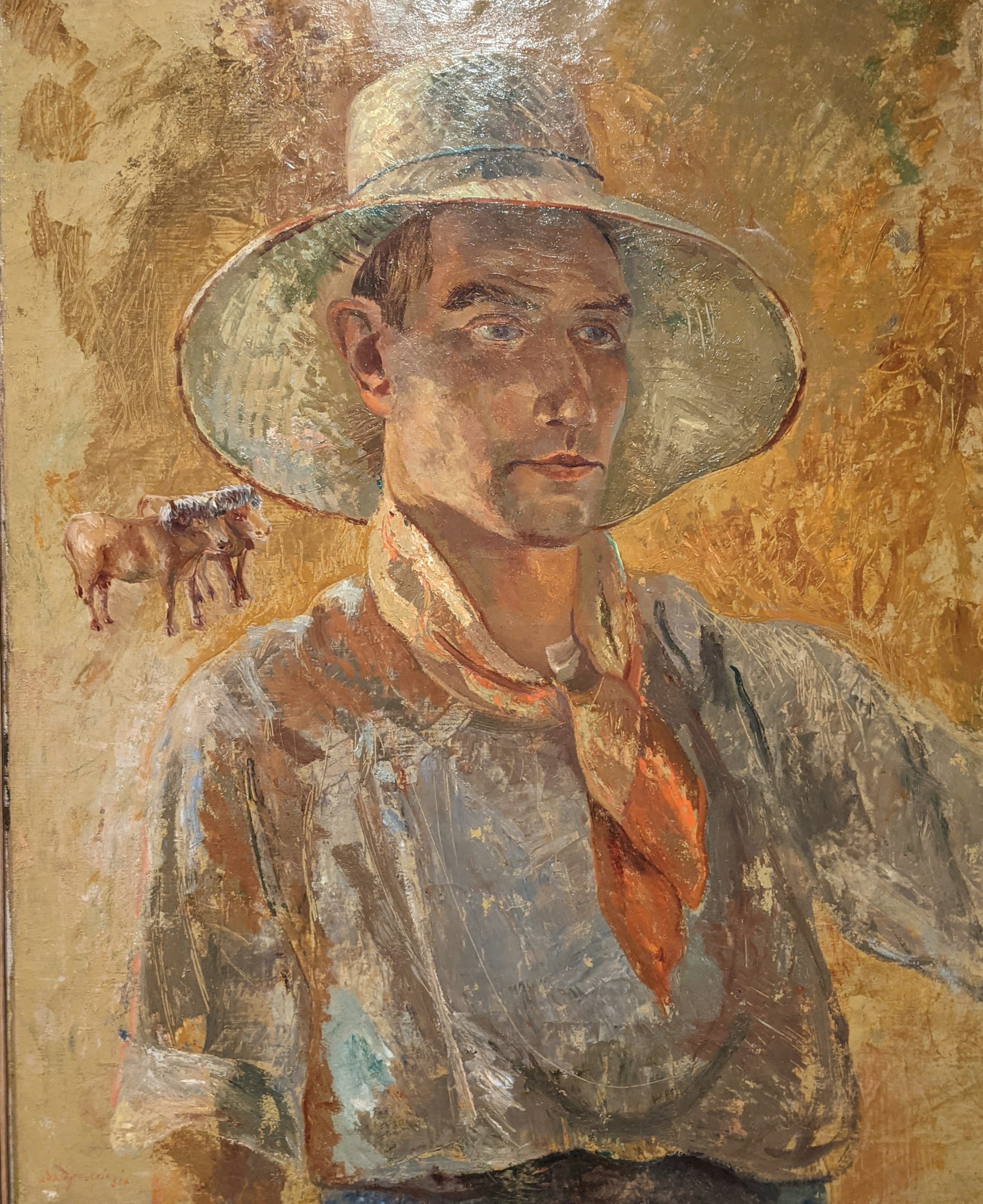 Adamson-Eric, Self-portrait as a shepherd, 1931

Covering four decades of the artist’s oeuvre, the collection of nearly a thousand works was donated by the artist’s wife, the textile artist Mari Adamson (1908-2000), with additions from the United States, Sweden, Finland and Estonia. One of the most cosmopolitan Estonian artists, he studied art in Berlin and Paris, travelled and painted extensively in Europe, Scandinavia and Russia and exhibited frequently at home and abroad. He was also the principal organiser of most exhibitions of Estonian work abroad.

Adamson-Eric’s travels were curtailed during the Soviet years and, along with many Estonian intellectuals who were seen as ‘bourgeois nationalists’, he was declared a public enemy. Prohibited from working as an artist, he was employed in a footwear factory. Although later reinstated, he suffered a stroke as a result of the stress, lost the use of his right hand and learned to paint with the left. The museum also shows temporary exhibitions on the ground floor and in the stone-vaulted basement.

Atmospherically displayed in a 17th century granary, with whitewashed walls, arched ceilings and flagstone floors, the collection of the Estonian Museum of Applied Art and Design comprises some 15,000 exhibits, including textiles, ceramics, leather, glass, jewellery, metalwork, furniture and product design. Together they offer the largest and most comprehensive overview of Estonian applied art and design from around 1900 onwards and trace the development of applied art from industrial products to an art form in itself. Special exhibitions accompany the permanent collection. 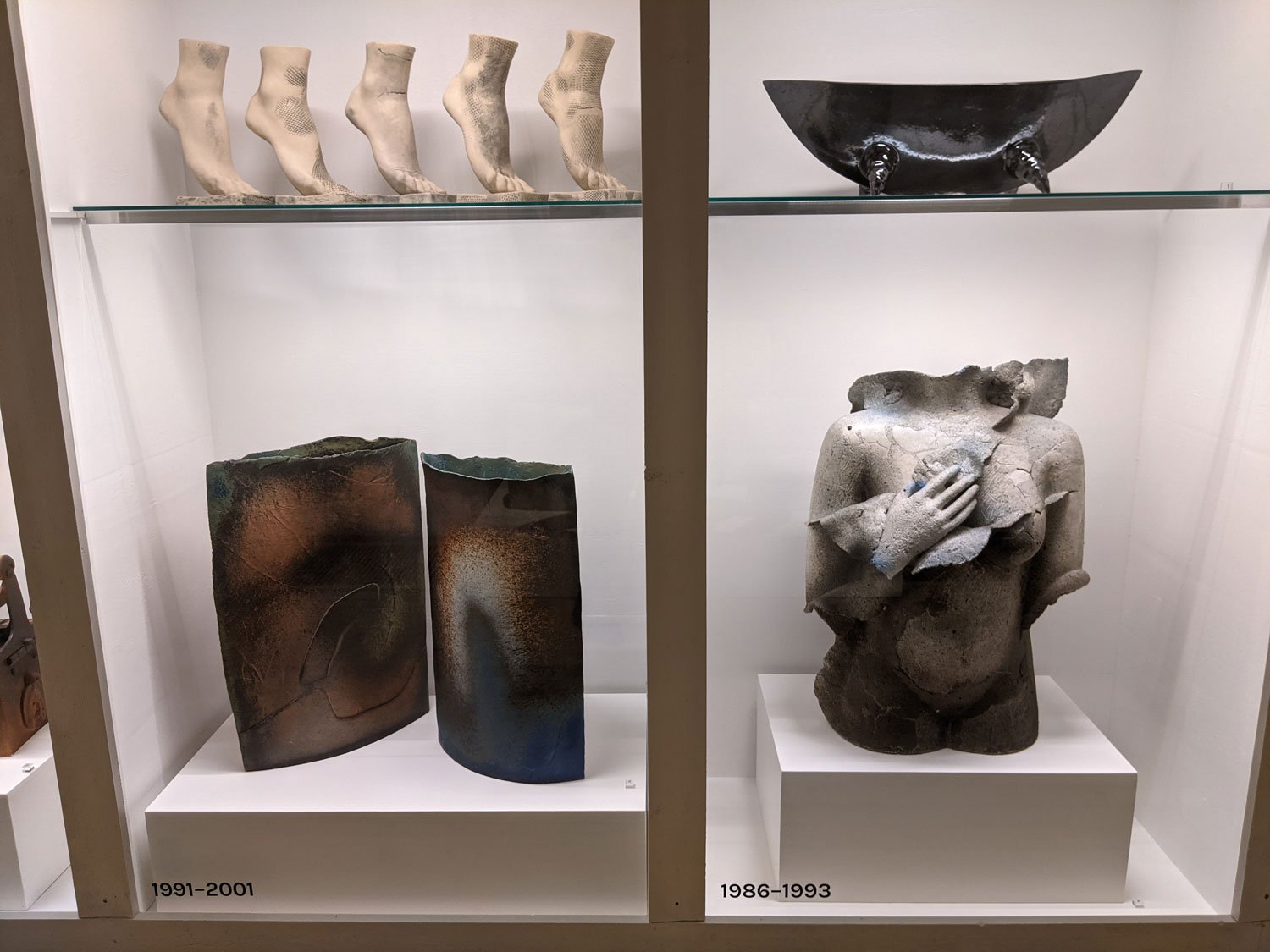 Ceramic works in the Estonian Museum of Applied Art

Tallinn’s newest art museum is located in the Noblessner district. Once a major submarine-building yard, it is now a trendy seafront quarter with new apartments, a promenade, a marina and industrial buildings converted into restaurants, bars and other businesses. 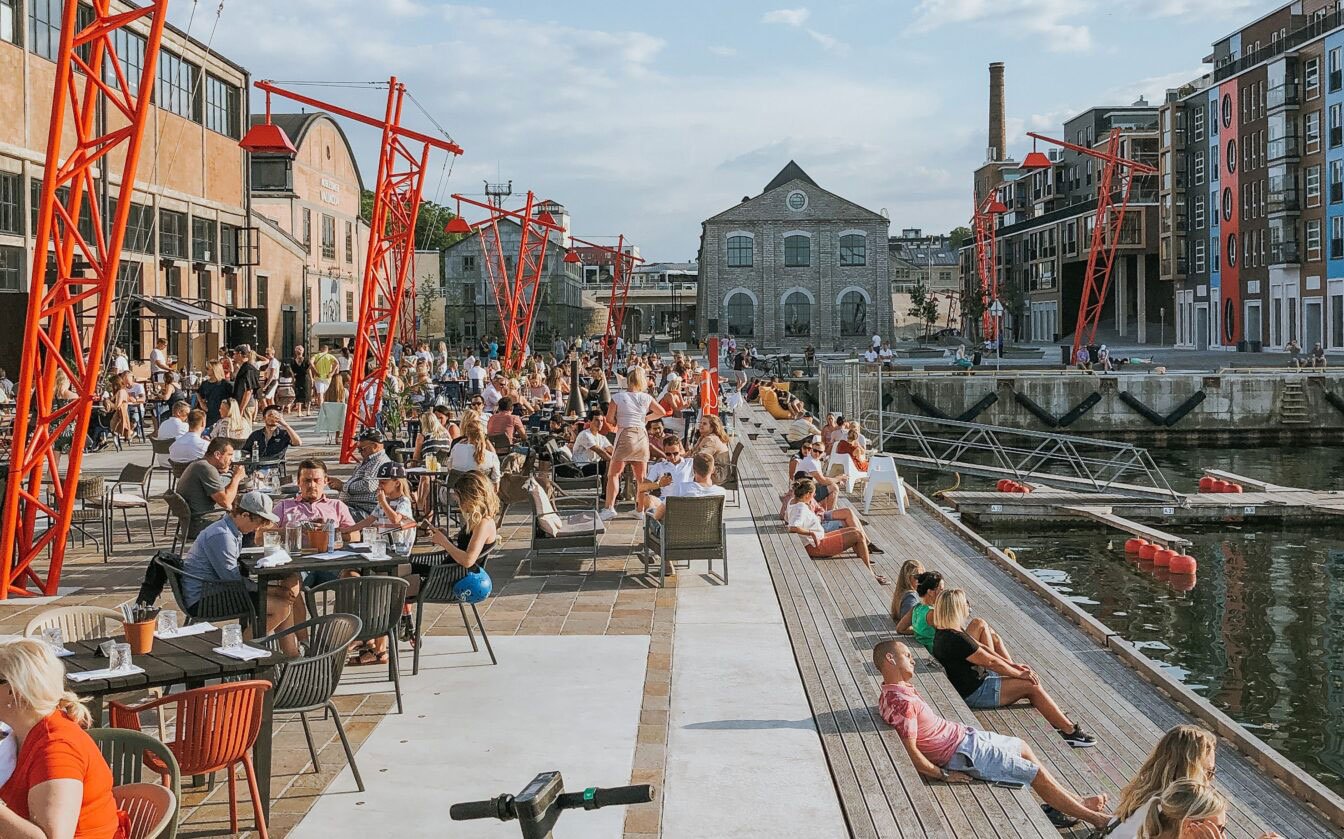 The most interesting way to reach Noblessner is along a coastal path past a number of interesting sights. These include the ferry port which links Tallinn to Helsinki and Stockholm, an abandoned, 5,000-seat concrete amphitheatre built for the 1980 Moscow Summer Olympics, the grim Patarei prison (now a prison museum, but for Estonians still a prominent symbol of Nazi and Soviet suppression), decommissioned boats and Iglupark, where wooden, hive-like structures house saunas, offices and rooms to rent by the day.

The centrepiece of Tallinn is the Kai Art Center (‘Kai’ means quay in Estonian), opened in 2019 in a former secret submarine factory and developed by an architectural firm which specialises in converting heritage buildings. Exhibitions in the sleek, gymnasium-like space focus on new and recent work resulting from international collaborations, such as The Great Pretender by Marge Monko (Estonia) and Gabriele Beveridge (UK), which explored 20th century imagery in advertising and shop display from a female perspective. 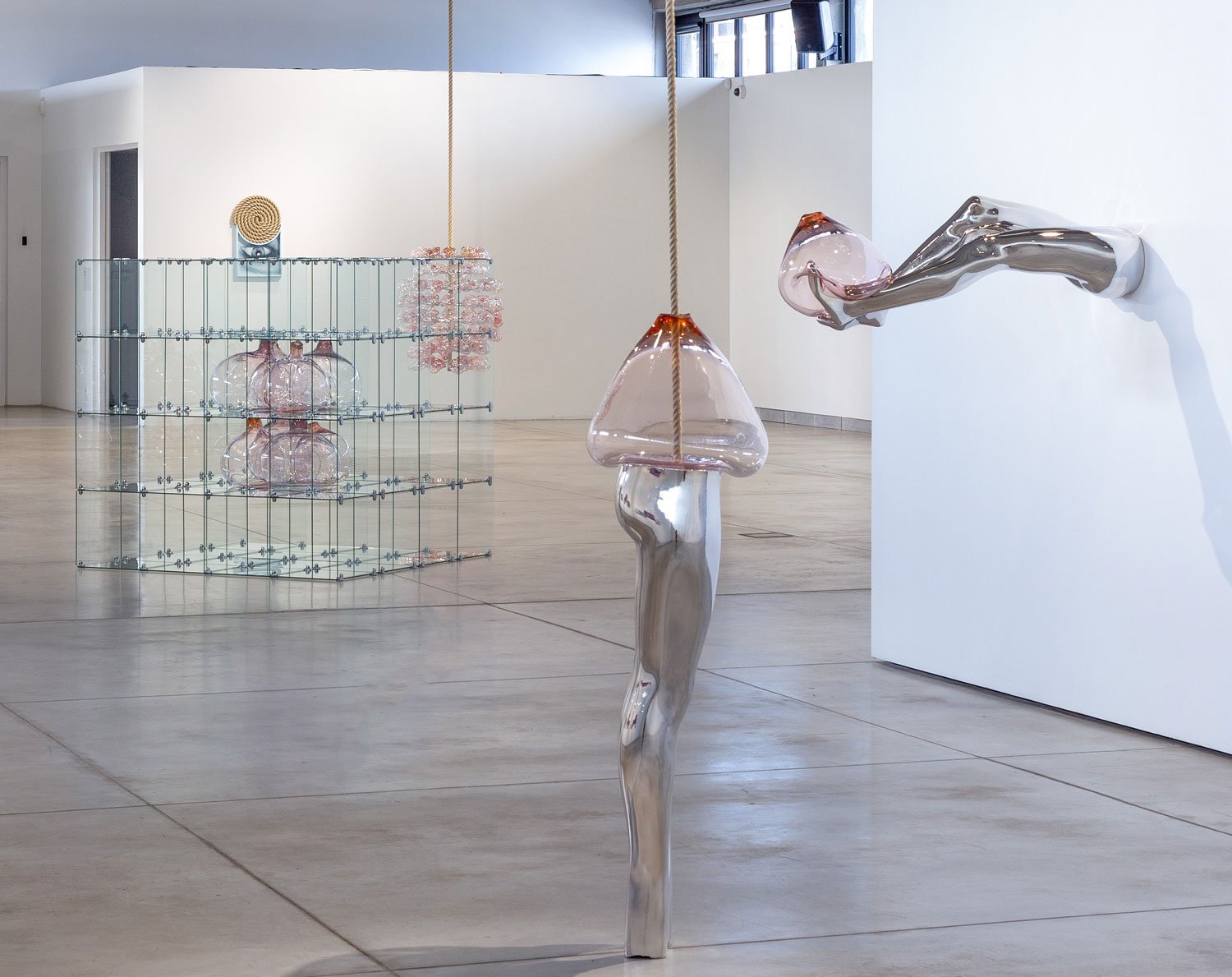 Work by Gabriele Beveridge at the Kai Art Center

A short tram ride from the city centre stops off at Kadriorg Park, favourite strolling grounds with locals, where there are three very different art museums which will fill a very pleasant viewing day.

Housed in a magnificent Baroque palace with a beautiful landscaped garden built in 1718 by Tsar Peter the Great for his Estonian wife Catherine (‘Kadriorg’ means Catherine’s Valley), the Kadriorg Art Museum is the only museum in Estonia dedicated to collecting foreign art. There is also a series of special exhibitions. The permanent collection of some 10,000 works features 16th to 20th century Dutch, Italian, Russian and German paintings as well as sculpture, graphic art and applied art, such as furniture, porcelain and glass. Many of the works used to decorate the interiors of manor houses in Estonia and some found their way to the museum right after the Russian Revolution of 1917. During the post-WWII period Russian art from Moscow and Leningrad was added. 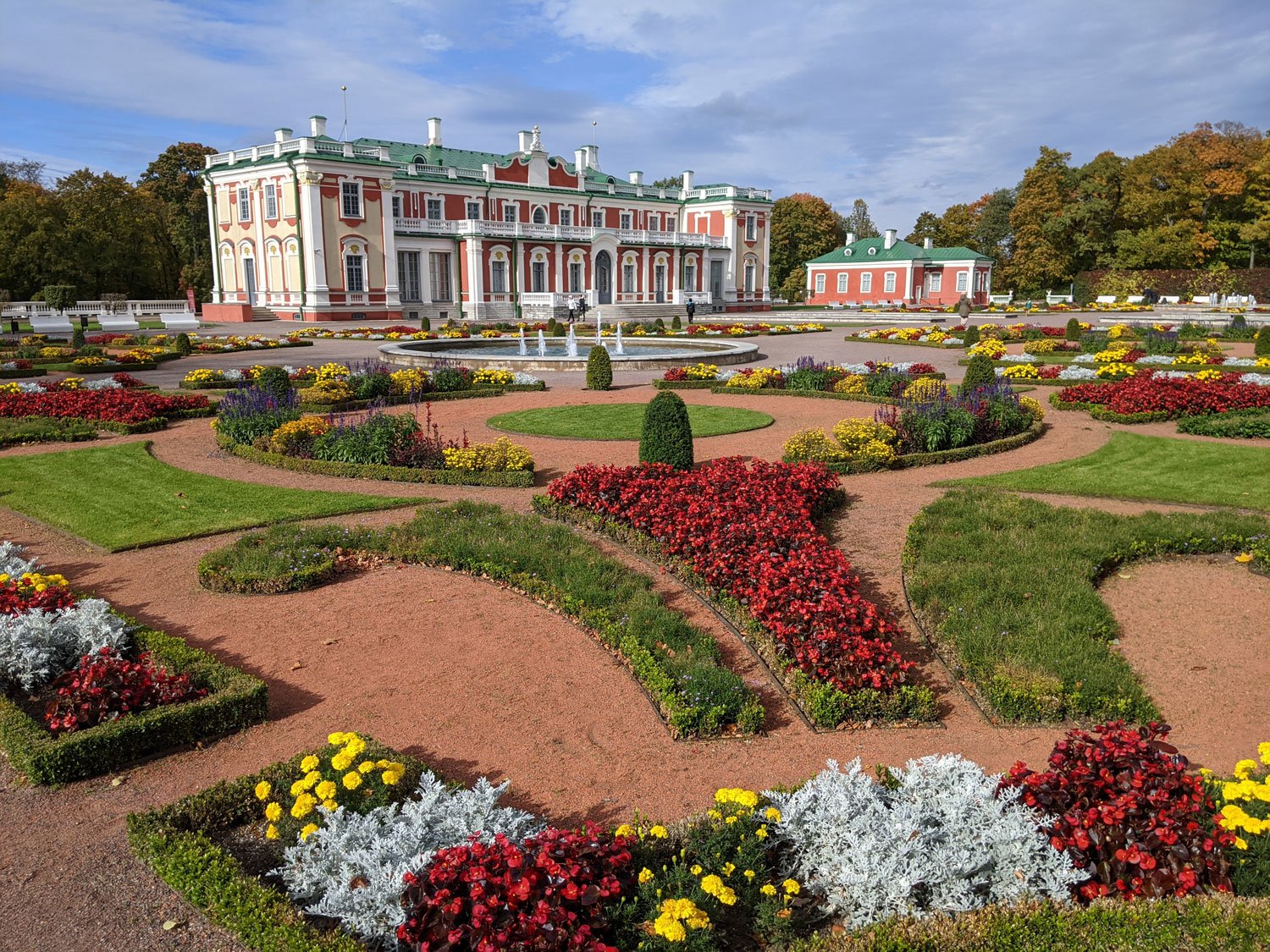 Nearby in the former kitchen building of the Kadriorg Palace the Mikkel Museum houses the collection of over 600 items donated by the Estonian collector Johannes Mikkel (1907-2006). It is the only state museum in Estonia dedicated to a private collection. What makes it exceptional is that it was assembled during the Soviet occupation, when the prevalent ideology was against private property. Remarkably, the collection was originally crammed into Mikkel’s four-room apartment in a typical Soviet flat, where he covered the walls with gold-framed paintings, hung crystal chandeliers and displayed Meissen, Sevres and Ming dynasty porcelain, Italian majolica and Delft faience. A documentary shows Mikkel being interviewed in his actual home.

The permanent exhibition comprises Western European paintings and prints from the 16th to the 20th century (including works by Titian, Rubens and Velazquez), Russian, Chinese and Japanese ceramics, a small selection of Estonian art, furniture, sculpture and graphic art – the latter, including works by Cranach, Dürer and Rembrandt, displayed only in temporary exhibitions due to its sensitivity to light. The ground floor of the museum hosts temporary exhibitions by modern artists. 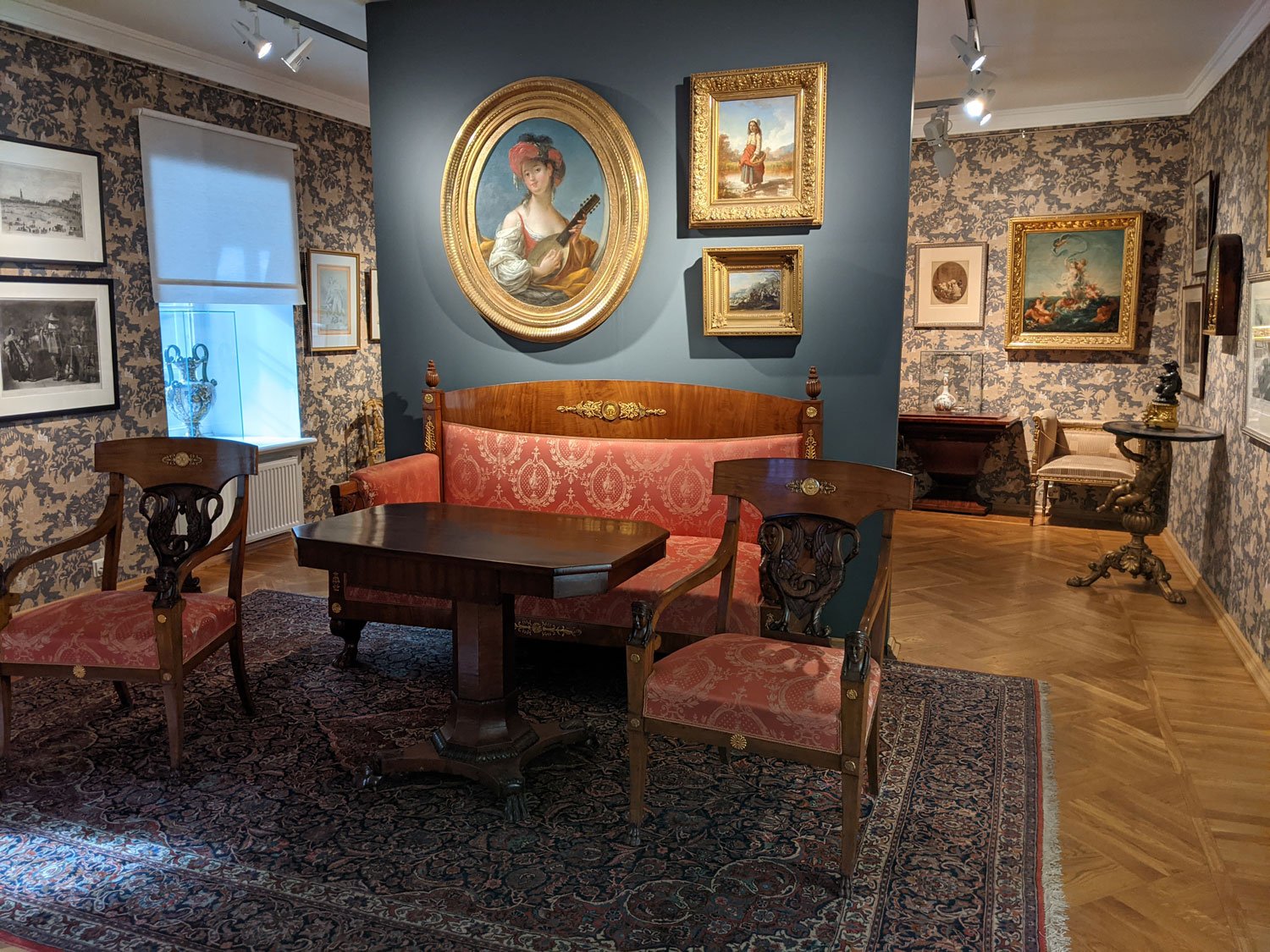 Overlooking Kadriorg Park from a limestone cliff is Kumu (pronounced ‘Koomoo’ and short for ‘kunstimuuseum’, or art museum). Dedicated to Estonian art from the 18th century to the present day as it evolved through the country’s multi-ethnic society, which blended Estonian, Baltic German and Russian traditions, it is in effect the country’s national gallery. The name was the result of a public contest, the word ‘kumu’ in Estonian also meaning response, hearsay or rumour.

Opened in 2006, for the first time providing a building where Estonian art could be permanently displayed, the new museum was at the time the largest construction project in Estonia since the country regained independence from the Soviet Union in 1991. The striking limestone and glass building, which incorporates natural materials with local traditions such as dolomite, wood, granite and copper, was named European Museum of the Year in 2008.

The statistics are impressive: seven storeys (two underground), 5,000 square metres of exhibition space, a total area which would cover 60 basketball courts and nearly 50,000 works of art. The large sculpture forecourt is a popular gathering spot and events space.

The permanent collection, displayed chronologically, is augmented by a series of special exhibitions, which have included Art from the Nile Valley, Die Brücke and Der Blaue Reiter Expressionists and Landscapes by Joan Miro. 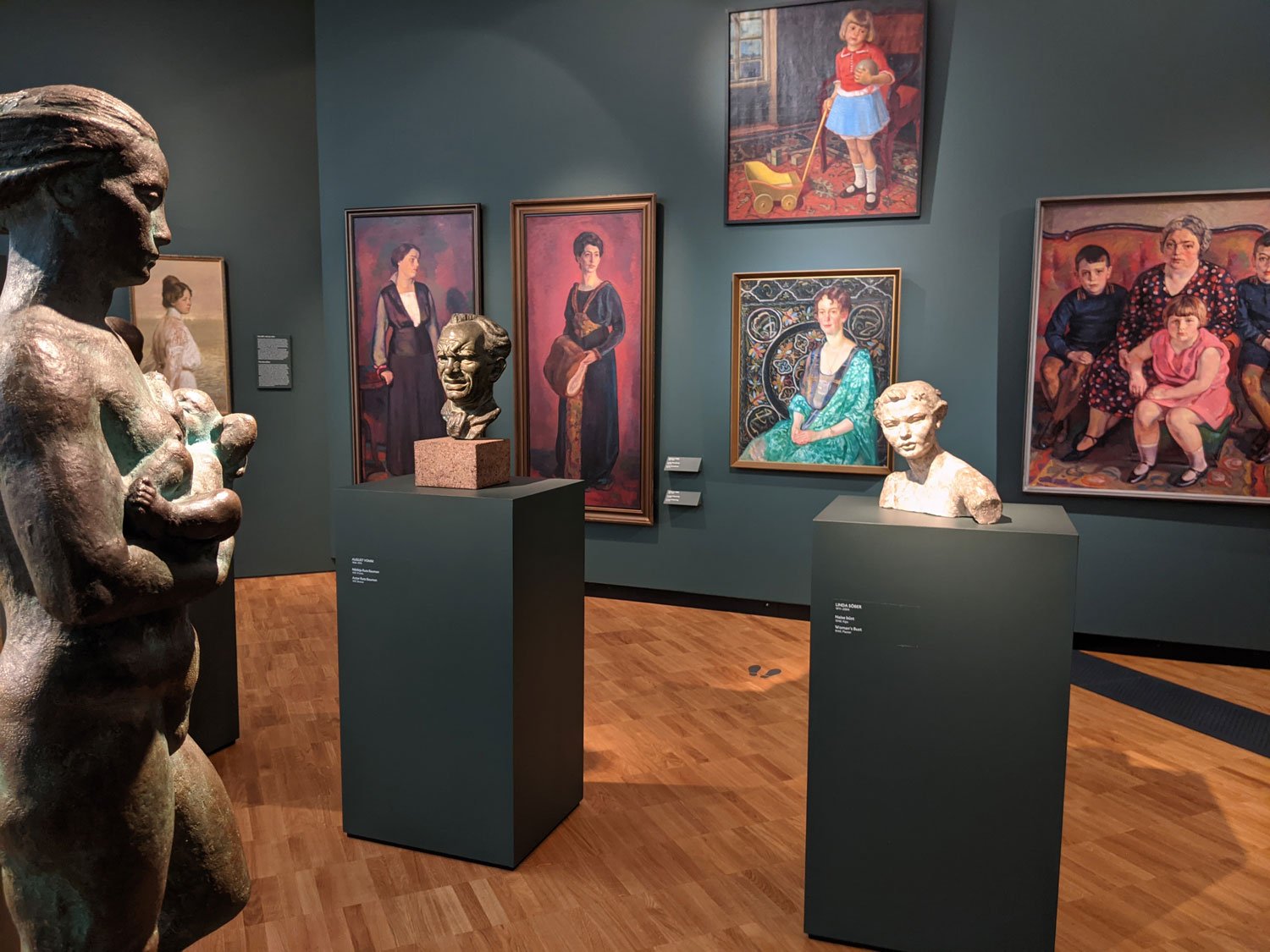 A display in Landscapes of Identity: Estonian Art 1700-1945 at Kumu

Founded by artists and curators as a protest against mainstream museums, the Contemporary Art Museum of Estonia operates from the former office building of a power station (the chimney stills towers over it), where it “squatted” for its first three years. The initial collection consisted of works bought from fellow artists for 1 Euro each. Now ‘legitimised’ and supported by the Estonian Ministry of Culture, the building, although constantly undergoing repairs and renovations, remains somewhat dilapidated. This has not prevented it from staging some thought-provoking exhibitions such as an Edith Carlson’s solo show in which the works were inspired by archaeological finds and medieval sculptures. 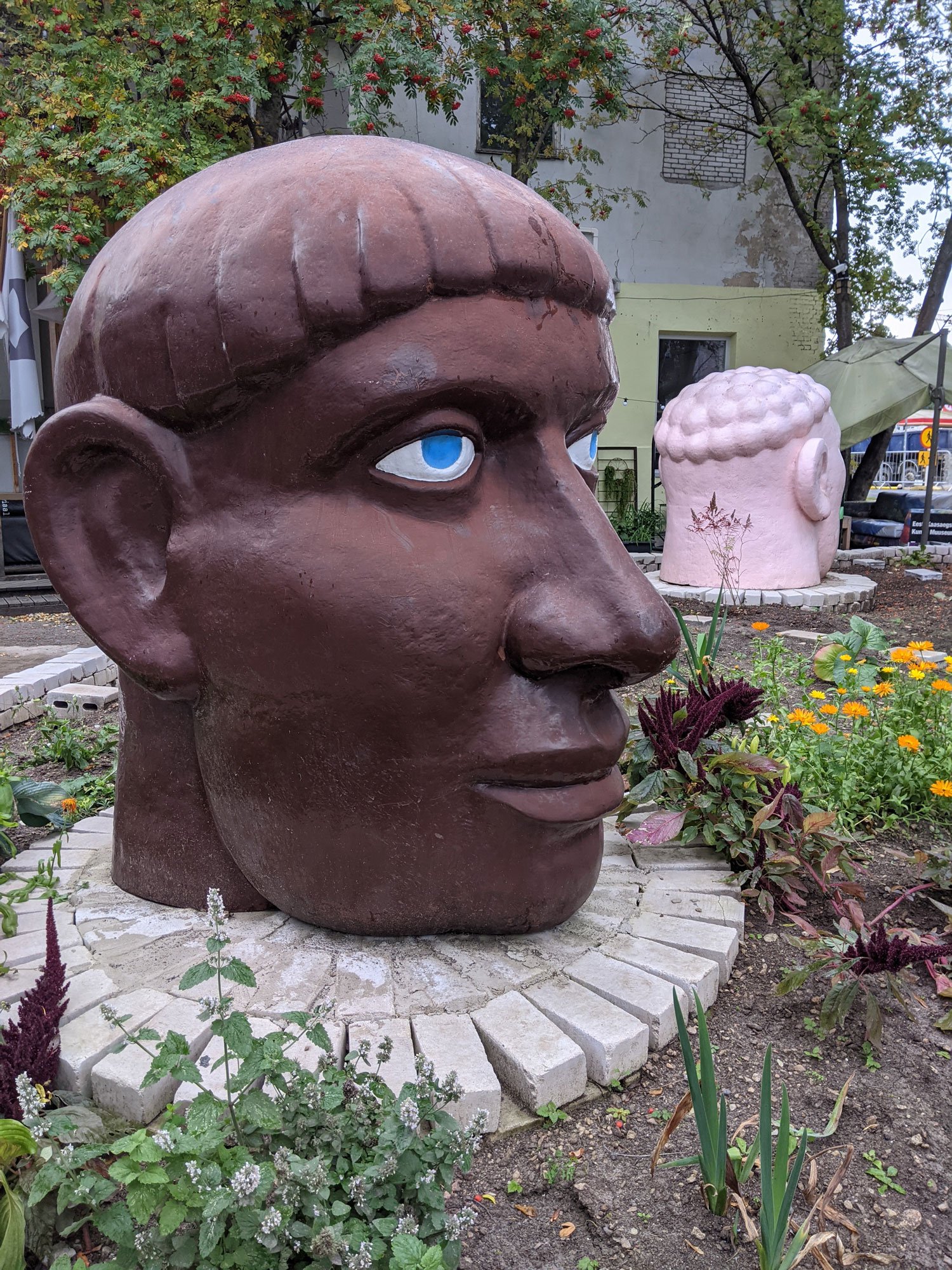 Round the corner from one another off Vabaduse (Freedom) Square are the Tallinn Art Hall, the city’s longest established contemporary art museum, and the Art Hall Gallery, both run by boards of artists and art administrators.

Near Tallinn’s Baltic train station a former factory complex which once built and repaired locomotives and railway wagons and later was a closed off site connected to the Soviet space programme has been transformed into the Telliskivi Creative City, the largest creative centre in Estonia, with around 250 businesses, including shops, restaurants, bars, rehearsal spaces, art galleries, a theatre company, an on-site barber shop, a print shop and its own radio station. The central courtyard has an outdoor gallery of art which changes every two months and the entire site is emblazoned with mural art. 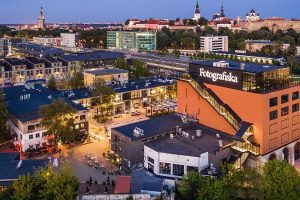 The centrepiece of Telliskivi is Fotografiska, a fine art photography gallery which presents regular exhibitions by international artists. The upper floor, DeStudio, features a permanent group exhibition of social, political and personal photography, which was only accepted as part of the art field in Estonia in the early 1990s. Fotografiska also has branches in Stockholm, Berlin and New York.

From the Nick Brandt exhibition Inherit the Dust at Fotografiska