With some 4,000 cultural events a year, Salzburg’s motto – “The World’s Stage” – is no idle boast 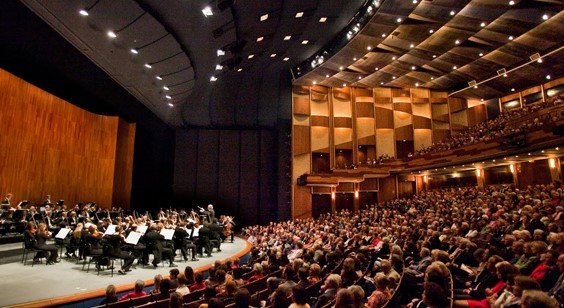 The name Wolfgang Amadeus Mozart is synonymous with Salzburg. While the maestro himself had few kind words to say about his home town (he resented that the local musical community did not rate his soprano wife and returned only once in the last ten years of his life), the two are now inextricably linked. The man is everywhere: on the sides of buses, on all manner of souvenirs and on life-sized cut-outs standing outside confectionery shops to entice passers-by with the famous ‘Mozartkugeln’ – chocolate balls bearing his portrait on their gilt wrappers. Even the airport is named after him. 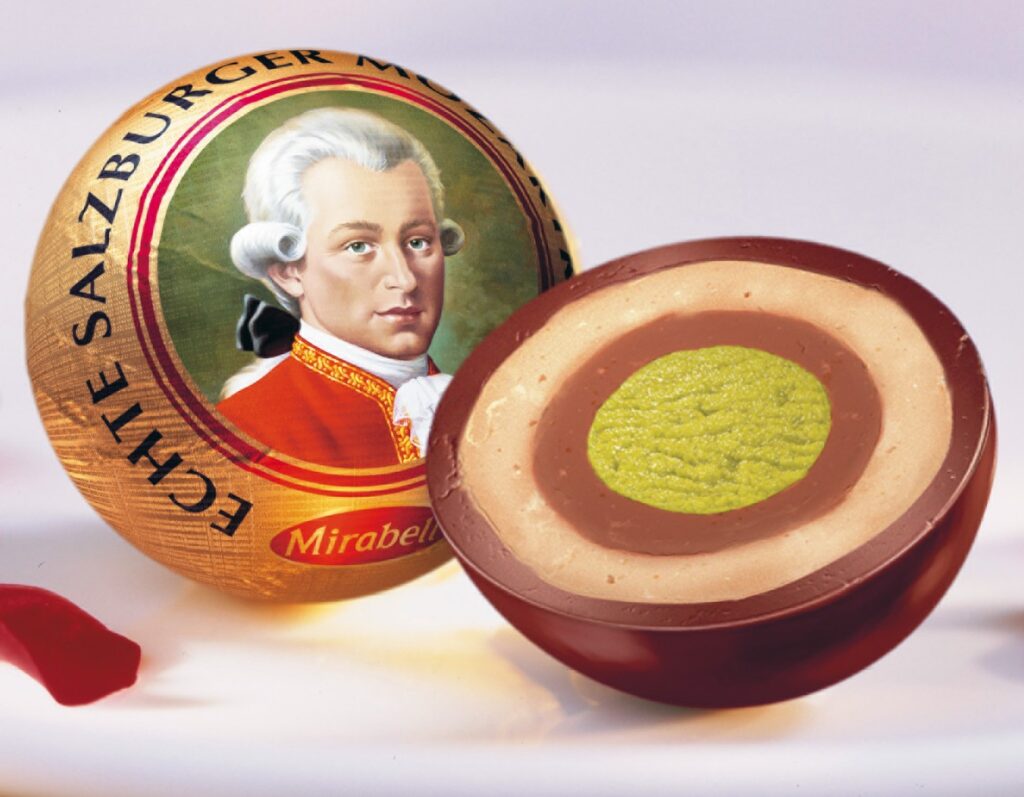 Mozart was first immortalised in chocolate in 1890 in the famous ‘Mozartkugeln’, probably the most popular Salzburg souvenir

Salzburg’s other musical giant is…Julie Andrews. If Salzburg was already a magnet for classical music-lovers, after the release of The Sound of Music in 1965, the city’s popularity went stratospheric. As a result, many of its landmarks are instantly recognisable to fans of the film who flock here to take guided tours of the locations where it was shot. The Sound of Music has inspired the sound of cash registers. 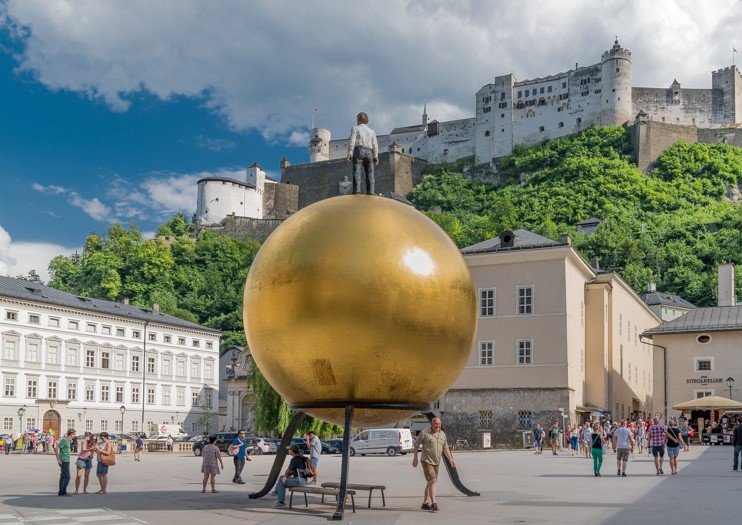 Salzburg’s Old Town, a UNESCO World Heritage Site, is an utterly charming cluster of Baroque buildings barely a mile from end to end and watched over by the magnificent medieval Hohensalzburg fortress, the oldest preserved citadel in central Europe. Even on an overcast day its white walls seem to gleam from within. In Mozartplatz a statue of Beethoven shows the man himself with one foot on Mount Parnussus, the mythic home of the Muses.

The main shopping thoroughfare is the ‘Getreidegasse’ (Grain Alley), where the oldest building dates from 1258. The pedestrianised street is a forest of wrought iron signs hanging outside almost every shop depicting the merchandise for sale inside. Even Macdonalds was required to put up an ornate version of the golden arches. The whole scene resembles a Disneyesque historical theme park and when church bells chime in a multi-toned call and answer, the glorious cacophony seems to bring the past to life. 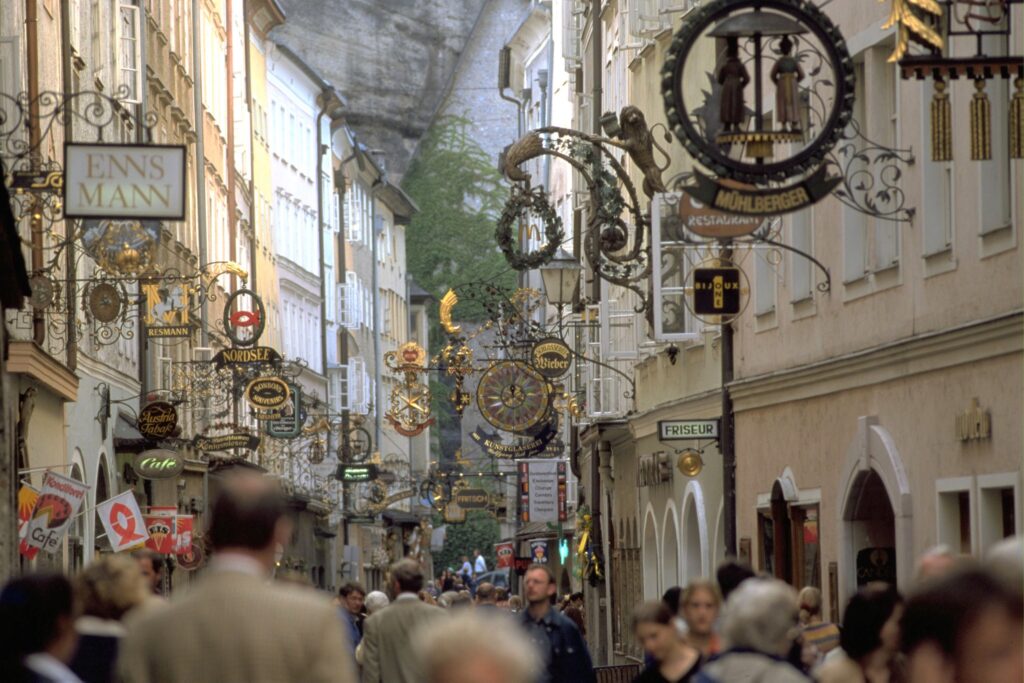 No cultural visit to Salzburg is complete without a pilgrimage to Mozart’s birthplace, where the town’s favourite son entered the world on January 27, 1756. Today it is one of the most visited museums in Austria, with portraits, documents and memorabilia – notably, Mozart’s violin and clavichord – giving an insight into life in an 18th century, middle class apartment. You wil have no trouble finding it – ‘Mozarts Geburtshaus’ (literally, birth house) is helpfully emblazoned across the front of the building. 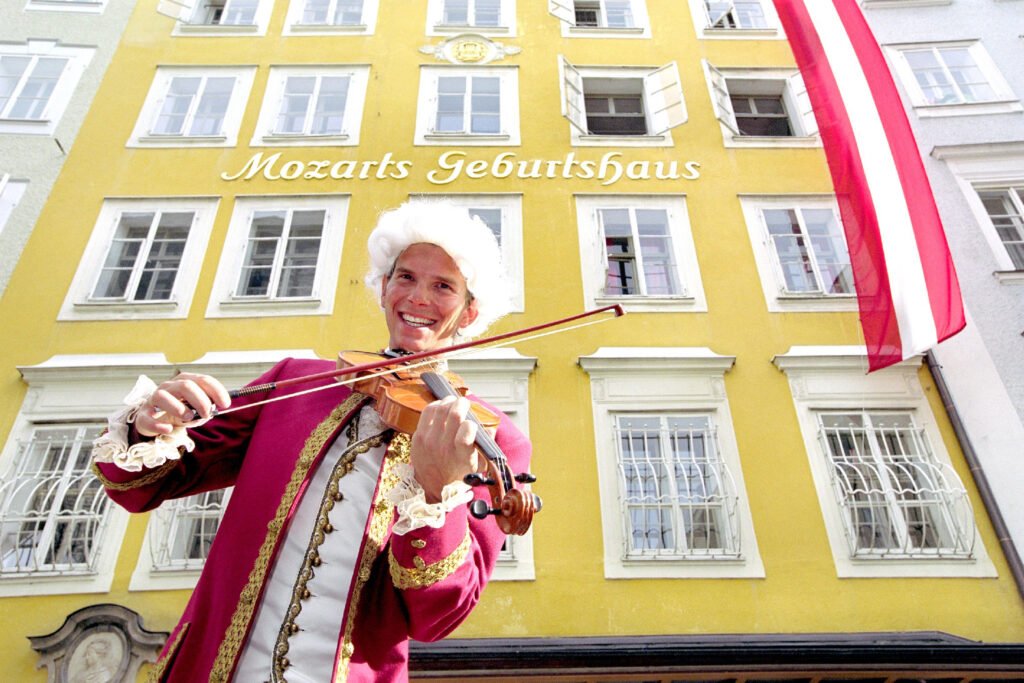 The performance season kicks off with Mozart Week around the composer’s birthday in the third week of January, a feast of operas, church music and piano and violin concerts. This is followed by the Easter Festival and the Whitsun Festival, featuring world class orchestras. The daddy of them all is the Salzburg Festival, a month-long celebration of music and drama founded in 1920. The festival’s early champions included the composer Richard Strauss and over the years the many performers have included Arturo Toscanini, Georg Solti and even the Trapp Family Singers, whose story was dramatised (and, to the dismay of many Salzburgers, distorted) in The Sound of Music. The main venue, the Great Festival Hall, was inaugurated in 1960 by the then artistic director, Salzburg-born Herbert von Karajan. In 2006 the festival celebrated the 250th anniversary of Mozart’s birth by staging all 22 of his operatic works. 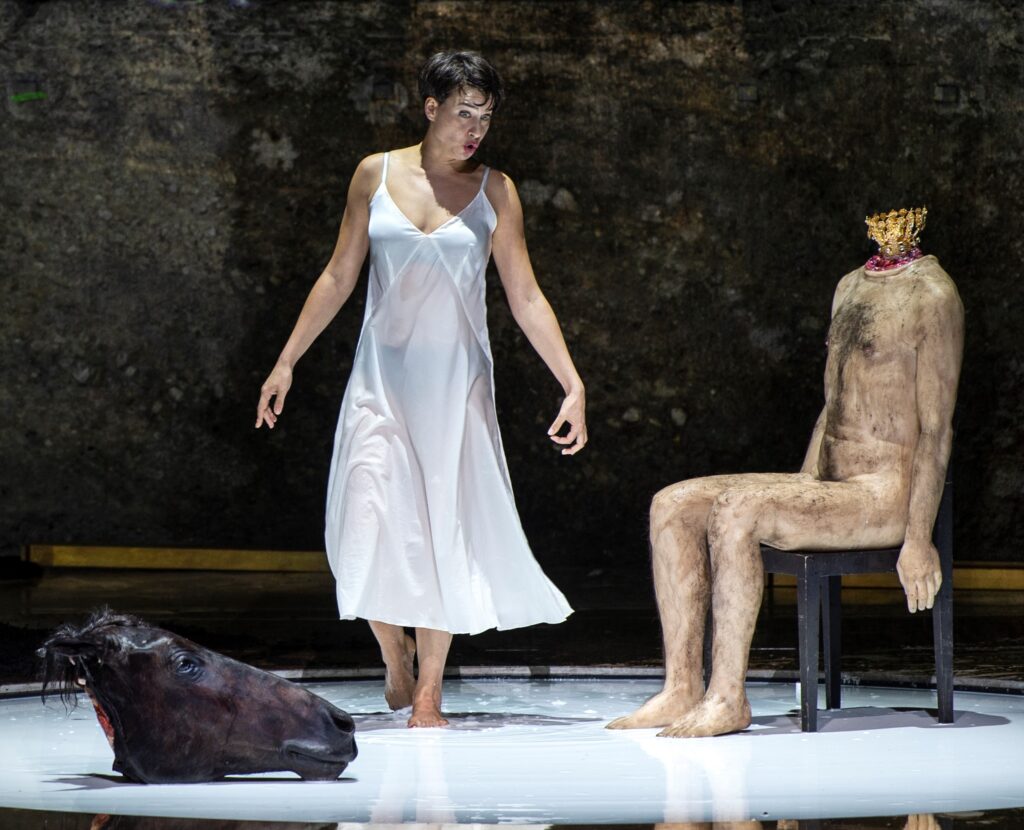 For an atmospheric evening of chamber music, you can’t beat a Salzburg Fortress Concert amid the magnificently musty smell of antiquity in the Prince’s Rooms, with sweeping views over the city and surrounding countryside. Pre-show, candlelit dinner packages are also available.

While the arts scene is dominated by classical music, Salzburg has one art museum well worth the visit. The Museum of Modern Art occupies two buildings. Perched on the ‘Mönchsberg’ (Monks’ Mountain) and overlooking the city like a lighthouse, a white marble-clad building is reached by a lift cut through solid rock. There are also scenic walkways up to it. The museum hosts a series of exhibitions on international art of the 20th and 21st century. There are magnificent views of the Old Town and surrounding mountains from the museum’s terrace or from its M32 cafe-restaurant. The museum also occupies the Rupertinum, an early Baroque building in the Old Town. 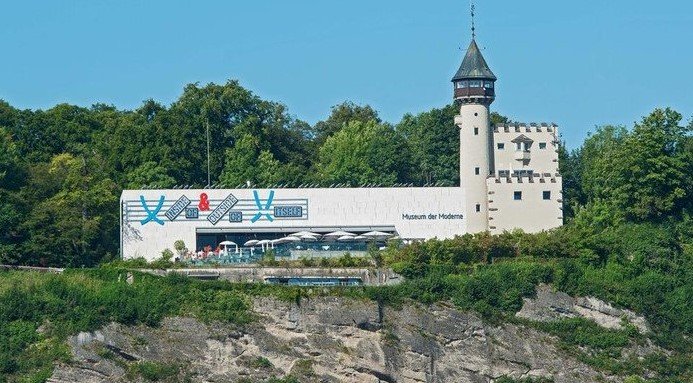 The Museum of Modern Art overlooks the city like a lighthouse

Another major attraction is the Baroque ‘Domquartier’ (Cathedral Quarter). The Cathedral itself is a magnificent edifice in the Italian style (echoing Salzburg’s earlier reputation as the ‘Rome of the north’) and has the first post-medieval facade with twin towers north of the Alps. Look out for the huge, 14th century marble font in which Mozart was baptised. The adjacent ‘Residenz’ is the former home of Salzburg’s prince archbishops. Somewhere in this labyrinth of state rooms. lavishly appointed with chandeliers, frescoes, paintings and tapestries, a six year old Mozart gave his first recital. The building also includes the Residence Gallery, a suite of rooms dedicated to exhibitions of European paintings, including 17th to 19th century Dutch, Flemish and Austrian works by artists such as Rembrandt, Rubens and Bruegel. 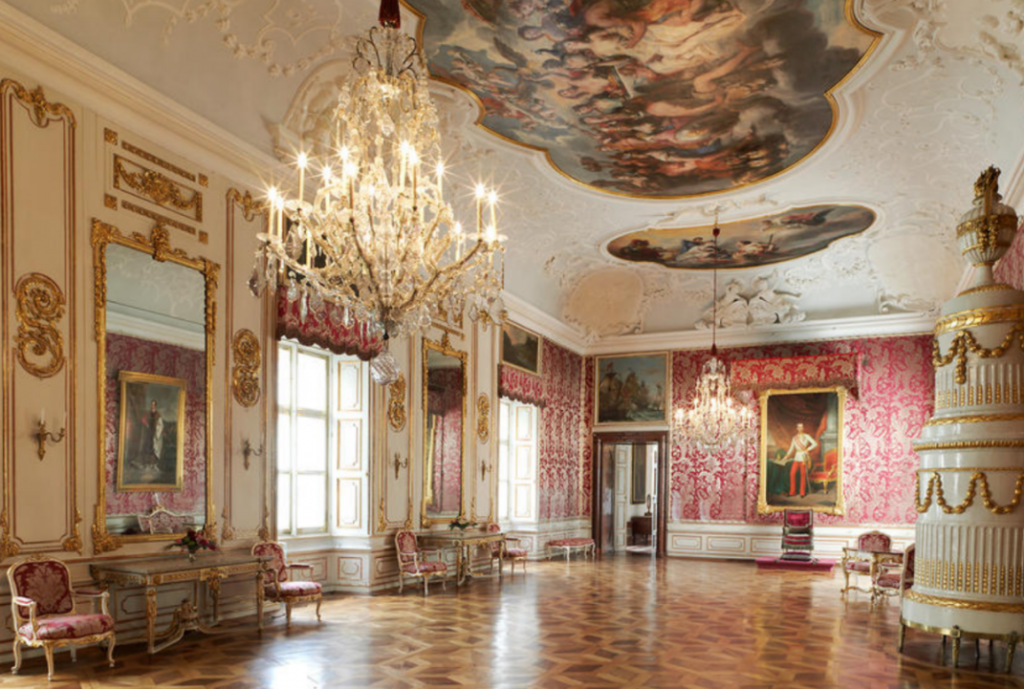 The ‘Residenz’ was home to Salzburg’s prince archbishops

Salzburg is dotted by some splendid modern public artworks which complement their Baroque environment. These include: German sculptor Stephan Balkenhol’s Sphaera, which has one of his familiar, white-shirted men standing on a giant, golden globe; Jaume Plensa’s Awilda, one of the Spanish artist’s famous, outsized humanoid heads; and Tony Cragg’s bronze sculpture Caldera on Makart Square, where you’ll also find Mozart’s residence from 1771 to 1780, which now houses a museum in the former family living quarters. 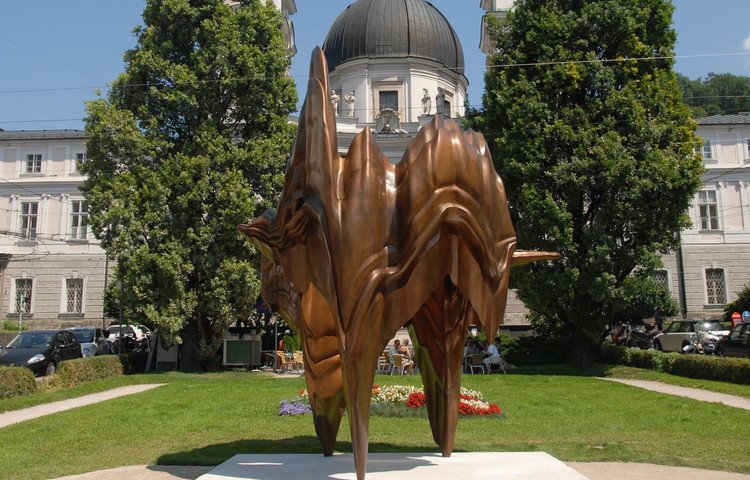 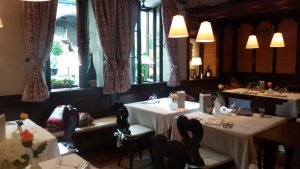 First mentioned in the year 803 on the occasion of a visit by the Emperor Charlemagne, the Restaurant St Peter is the oldest documented restaurant in central Europe. Hewn out of the limestone cliff which protects Salzburg from the westerly winds coming off the Alps, the St Peter can accommodate up to 800 guests in 12 rooms. Some menu selections are based on recipes from Mozart’s time. Two local specialities worth trying are ‘Käsesuppe’ (cheese soup) and a feather-light soufflé dessert called ‘Salzburger Nockerl’. Go for a Mozart lunch concert (two courses with opera singer/concert pianist duo) or a candlelit dinner concert (three courses, five-piece ensemble and two singers) in the Baroque Hall. 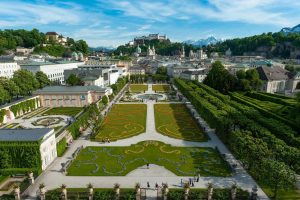 Virtually unchanged since 1730, the Mirabell Gardens are the city’s largest open space. Ornate fountains and a collection of statues based on classical mythology make a stroll here a delightful experience. A curious feature is the Dwarf Garden, with its grotesque marble statues which served as a Renaissance-era reminder of the world’s imperfections and deformities. 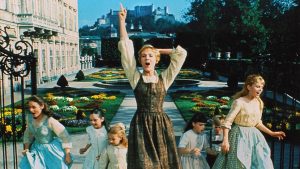 It would take a hard heart not to walk down the street humming a few bars of practically any song from The Sound of Music. The Mirabell Gardens, Leopoldskron Palace and parts of the Old Town all figure prominently in the film. 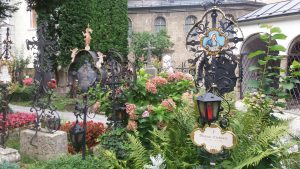 The small but densely ‘populated’ Monastery of St Peter Cemetery is a touching and mystical scene. A small forest of headstones and wrought iron grave markers are decorated with gilt facings, painted madonnas, crucifixes, cherubs and images of the deceased. Older remains are entombed in catacombs cut into the nearby limestone rockface. 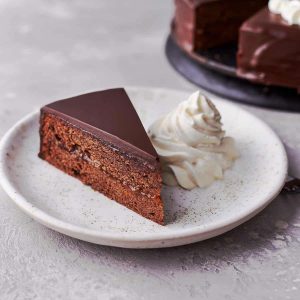 Austrian cafe culture is not limited to Vienna, and Salzburg has some great spots for watching the world go by. At Cafe Glockenspiel in Mozartplatz the upstairs terrace overlooks a statue of the man himself with one foot on Mount Parnussus, the mythic Greek home of the muses. Cafe Bazar is a chandelier-hung favourite of artists past and present with a riverside terrace looking over the river to the Old Town. Cafe Fürst is where Mozart’s ‘Kugeln’ (literally, bullets) were first immortalised in chocolate in 1890, and the little, marzipan-filled balls are now a favourite tourist souvenir. Owned by the same people as the famous Hotel Sacher in Vienna, Cafe Sacher is where you can wash down a slice of the real ‘Sachertorte’ (tart) with your coffee.