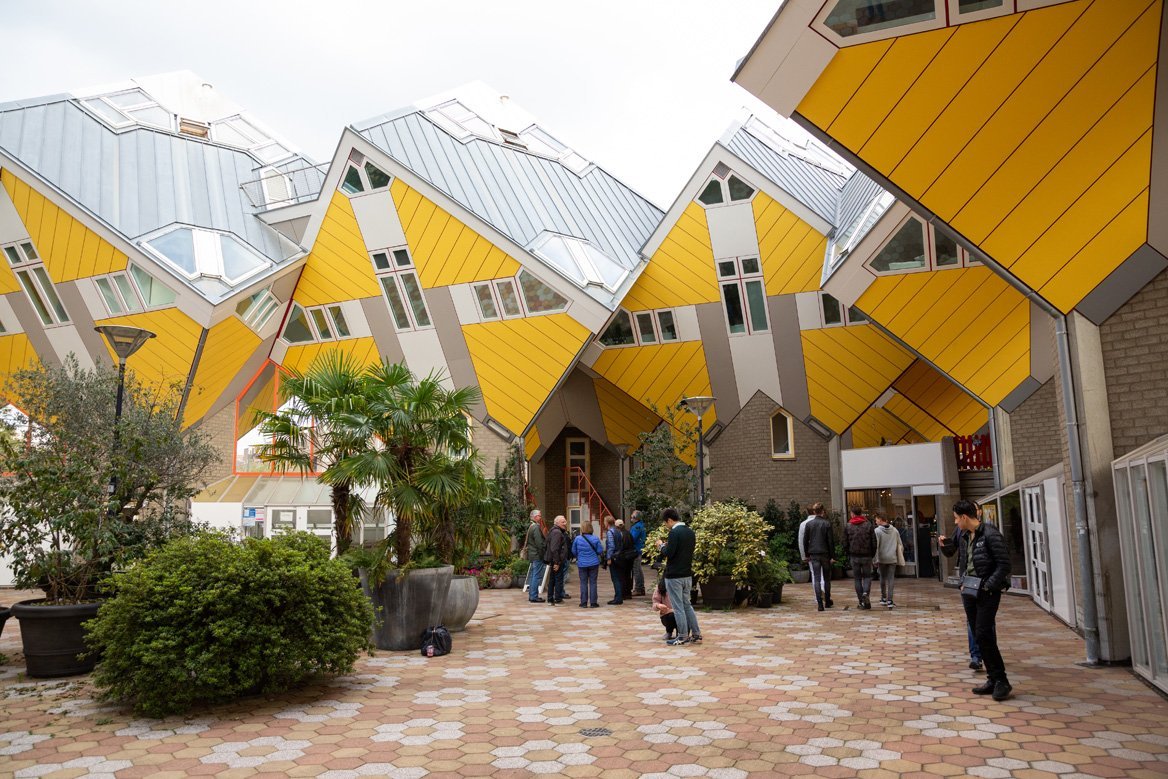 Rotterdam is not a typical Dutch city. Emerging from extensive WWII bomb damage – the ‘fire boundary’ is still marked today by small lights in the pavement in the shape of red flames – reconstruction began just two weeks after the war ended. Rather than rebuilding in the image of its past, the city made a clean break with it and opted for modern architecture, with light, air and space the watchwords. Today’s Rotterdam is a buzzing, energetic metropolis and its official slogan, ‘Make it happen’, is no idle boast.

A great place to start an art tour of Rotterdam is in the ‘Museumkwartier’ around Museum Park and the arty Witte de With Street leading off it. In its elegant 1930s building, Rotterdam’s premier art museum is Museum Boijmans Van Beuningen, rather clumsily named after the combined collections of a lawyer and an industrialist which form the core of the museum’s works. The permanent collection of fine art, applied art, decorative arts and design is shown in displays juxtaposing Old Masters with modern works, which essentially tell the history of art from the Middle Ages to the 21st century. Exhibits range from small paintings to massive installations.

Centrepiece works include Pieter Bruegel the Elder’s The Tower of Babel, Dali’s The Face of War, Magritte’s On the Threshold of Liberty and Richard Serra’s 13-metre Waxing Arcs. Other featured artists include Rembrandt, Rubens, Dürer, Monet, Degas, Picasso, van Gogh, De Kooning and many more. There are around 25 temporary exhibitions a year.

Standing next door like a massive, reflective bowl, the Depot Boijmans Van Beuningen is the world’s first publicly accessible art storage facility, which will enable visitors to view the 90 per cent or so of the museum’s 150,000-plus artworks that, like most large museums, the original building lacks the space to display. The idea for the design by Rotterdam architects MVRDV, who were also responsible for the Markthal (see Architecture), was inspired by an Ikea salad bowl during a lunch break around a communal table. There are great views from the 40-metre high rooftop garden.

On the other side of Museum Park (passing by a pleasant statue garden on the way) the Kunsthal Rotterdam (‘Kunst’ is Dutch for ‘art’) has no permanent collection of its own, but organises around 25 ‘freaky’ (their word) exhibitions a year, presenting culture in the broadest sense, from Soviet design to ‘Kookt’ (Cooked), an ‘exhibition’ of what comes from the land and the sea which featured farmers, bakers, fisheries, butchers and other producers.

The Kunsthal is as well known for its controversial design (by Rotterdam’s Rem Koolhaas) as for the exhibitions in it. A modern version of a Dutch dyke house, it has a ramp running through it bridging the height differences between the Westseedijk, the roadside embankment on which it stands, and the Museum Park behind it.

You may find the navigation system through the Kunsthal’s exhibition spaces mystifying, allegedly designed by the architect so that visitors would meet and intermingle – presumably, all long lost and desperate for human company. The surrounding sculpture garden includes giant rabbits, towering crows and a pair of buttocks on legs. Don’t forget to look up to see the figure of man teetering on the edge of the roof. That’s Henk Visch’s mysteriously named sculpture The Camel and his Driver.

The nearby Witte de Withstraat (named after a 17th century naval officer), the city’s ‘axis of art’, is lined with galleries, interesting gift shops and arty cafes. Named after an artwork installed on the building’s facade, Canadian artist Ken Lum’s Melly Shum Hates Her Job, the Kunstinstituut Melly encourages experimental work by international artists and curators. There is a strong emphasis on collaboration and many now renowned contemporary artists received early exposure there. Presentations vary from solo exhibitions to thematic group shows. 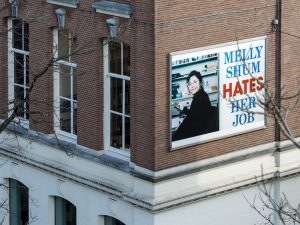 Also on Witte de With Street, in a former school building, Tent Rotterdam is a platform for emerging contemporary artists with their roots in the city. Here the emphasis is on art which reflects the community, so work is mainly by politically engaged Rotterdam artists exploring social, political and art-historical themes. A block down the street from Tent is Showroom MAMA, which programmes exhibitions by emerging artists in its glass-fronted, street corner building. Every Friday evening Witte de Withstraat throngs with people during Kunstblock, when admission to the galleries is free.

Photography fans will want to head over the Erasmus Bridge (see Architecture) to the Nederlands Fotomuseum, which holds the national collection of over five million images. The museum exhibits photography in all its facets, from documentary and experimental to historical and present day. Special exhibitions feature major names in the world of photography. (A short walk to the end of Wilhelminapier brings you to the New York Hotel, the Art Nouveau former headquarters of the Holland American line, where trans-Atlantic passengers used to come and go.)

You won’t go far in Rotterdam without coming across public artworks, including some by heavy hitters such as Henry Moore, Auguste Rodin, Claes Oldenburg, Jeff Wall, Willem de Kooning and Alexander Calder. Highlights include Pablo Picasso and Carl Nesjar’s cubist Sylvette, which stands outside the Museum Boijmans Van Beuningen. Based on a drawing by Picasso, it is made of filled concrete with black pebbles, with Nesjar using a sand-blaster to ‘draw’ the girl. Also worth searching out are David Bade’s colourful melange Anita, made from found materials, clay and polyurethane, and Cascade, a melange of colourful oil drums with melting figures by Atelier van Lieshout.

Since WWII Rotterdam has continued its commitment to ground-breaking architecture rivalling any city in Europe. For the “Wow!” factor head to the Markthal, a giant, hangar-like building (and the first covered market hall in the Netherlands) with a 40-metre high arch covered in the world’s biggest artwork. Made of 4,000 shiny tiles printed with the help of Pixar Studios, Arno Coonen’s mega-mural Horn of Plenty is the size of two football fields and depicts some of the products for sale down below, such as giant fish, fruits and vegetables.

Soaring above the shoppers like a modern Sistine Chapel, it was intended by the artist as “a worship of nature, an ode to the universe” designed to induce a “child-like sense of wonder”. With over 220 apartments seemingly hanging over the marker floor, it is the first retail/accommodation combo of its kind in the world.

A short walk from the Markthal is the Kijk-Kubus, a cluster of canary yellow cube houses seemingly piled higgledy-piggledy on top of one another. Imagine a stack of normal apartments each rotated 45 degrees and you get the idea. People really do live in these things, and one of them is open for the public to see why its residents do not tumble to the ground. One of the cubes is available for B&B stays.

Around the corner from the Museum Boijmans Van Beuningen are two Modernist ‘show houses’ open to the public. The Chabot Museum houses a collection of paintings and sculptures by the Dutch Expressionist Henk Chabot (1894-1949) in the homely atmosphere of a beautiful Modernist villa from 1938. Chabot’s works are shown along with those by both his contemporaries and present day kindred spirits and there is a series of temporary exhibitions on Expressionism and the inter-war years.

Up the street the Sonneveld House is one of the best preserved homes built in the Dutch Functionalist style. Designed in the 1930s by the same architecture firm responsible for the Van Nelle Factory, it shows how a prominent Rotterdam family embraced modernism in their everyday lifestyle.

Other buildings worth looking out for are Central Station, where arriving passengers wonder at its angular roof stabbing the sky like a huge, white arrow pointing to the city centre, and nearby the enormous 1950s Groot Handelsgebouw (Wholesale Building), an icon of Rotterdam’s visionary post-war reconstruction of the city. 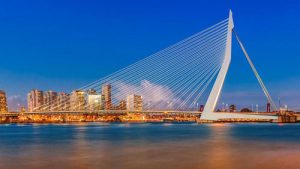 The city’s definitive architectural icon is the Eramus Bridge, which spans the River Maas like a giant stringed instrument. The locals prefer to see it as ‘de Zwaan’ (the swan).