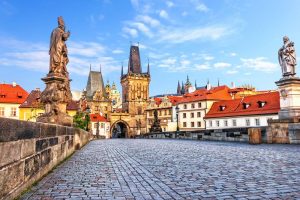 It is easy to agree with the commonly held view that Prague is the most beautiful city in Europe. Damage by WWII bombing was minimal compared to the ruinous state of many other cities, so a centuries-long line of creating architectural gems through the Gothic, Renaissance and Baroque periods was virtually unbroken. As a result, this “museum of architecture” is the largest urban historical centre on the UNESCO World Heritage List.

Hand in hand with its architectural legacy is Prague’s history of artistic excellence. Czech-born Alphonse Mucha became a leading light of the Art Nouveau, the painter and graphic artist Frantisek Kupka was an early pioneer of abstract art, Cubism was embraced in its early days in Prague and today the sculptor David Cerny has left his mark all over the city with his witty and controversial works.

In an opulent building stemming from the days of the Austro-Hungarian Empire and which is also home to the Czech Philharmonic, the Galerie Rudolfinum hosts a series of temporary exhibitions in its cavernous halls. With no permanent collection of its own, it, it showcases the best national talent along with international stars such a Andy Warhol, Damien Hirst, Louise Bourgeois, Neo Rauch and Nan Goldin. 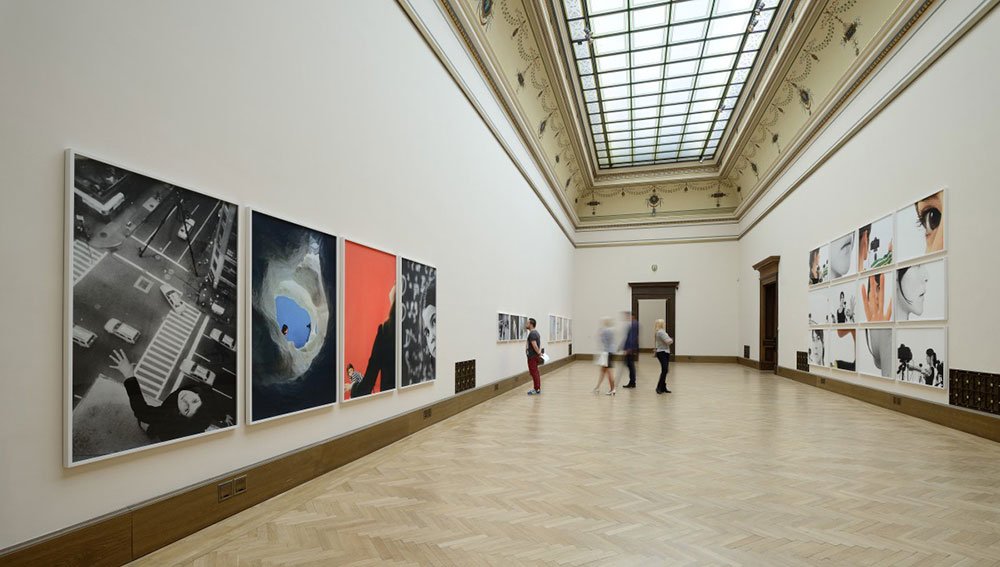 Across the street is the Museum of Decorative Arts in another building which is itself a work of art. Founded in the 1870s to preserve art and crafts at the advent of the era of mass-production, its lavish murals, elaborate stained glass windows, gilded ceilings and ornate plasterwork are the work of its founders, the Chamber of Commerce and Trade, and the decor depicts handicrafts such as basketry, goldsmithing, lace-making and weaving. The collection includes ceramics, textiles, furniture, clocks, precious metals and jewellery. Its extensive glass collection, one of the largest in the world, is particularly prized.

For centuries artists have played with perspective and optical illusion, and both form the basis of Prague’s most playful art gallery. Taking its inspiration from the likes of trompe l’oeil, the perspective-bending graphic artist M.C. Escher and Dali’s three-dimensional installation Face of Mae West, the Illusion Art Museum is one gallery where you are positively encouraged to take photos as you interact with over 50 exhibits.

Stand on the marked spots and you can photograph your companion seemingly being crushed by a giant horse crashing through the wall, kneeling to be knighted by a sword-carrying queen, standing on the precipice of a large hole in the floor or sprouting giant angel’s wings. Is it art? Maybe not, but it’s definitely huge fun.

The Czech artist Alphonse Mucha (1860-1939) was one of the pre-eminent exponents of Parisian Art Nouveau and most famous for revolutionising poster design, particularly those commissioned by the French actress Sarah Bernhardt to promote her appearances. Mucha’s signature style – beautiful women, flowing hair, extravagant flowers and fanciful script -made him rich and famous and led to a vast range of merchandise, from calendars, biscuit tins and jewellery to cutlery, fabrics and even the entire exterior and interior of the Fouquet jewellery shop in Paris.

The Mucha Museum, the only one in the world dedicated to his work, has a particular focus on his Paris period. There is also an improvised interior of his Paris studio featuring the original furniture and photographs Mucha took of elegant models in some of the now immortalised poses. While best known for his Art Nouveau posters, Mucha is greatly underrated for his contributions to symbolism and figurative art, and a large format oil painting Star (also known as Woman in the Wilderness), demonstrates his great skill.

Sadly, Mucha’s finest work is missing from this collection. Taking 18 years to complete, Slav Epic is a series of 20 oil paintings Mucha undertook as a monument to the struggles and achievements of the Slav people. It is currently in storage while a solution is found for its permanent display.

In its lovely location in former mill buildings on the bank of the River Vltava, Museum Kampa focuses on mainly 20th century Central European, particularly Czech, art with occasional overlaps with the 19th and 21st centuries. One of the most comprehensive collections of its kind in the world, it was assembled by the Czech art patron Meda Mladek, who with her husband (a former director of the International Monetary Fund) spent many years in exile before returning to her homeland after the Velvet Revolution, whereupon she donated the collection to the city of Prague.

Along with temporary exhibitions, there are two on permanent display: seven rooms of works by the Czech painter and graphic artist Frantisek Kupka (1871-1957) and sculptures, drawings and designs by the Czech sculptor Otto Gutfreund (1889-1927), mainly from his Cubist period. There are also large contemporary sculptures placed around the site.

Located in the House of the Black Madonna (she looks out from her gilded cage on a corner of Prague’s first Cubist building, built originally as a department store), the Museum of Czech Cubism has a permanent exhibition of works from the collection of the Museum of Decorative Arts, including furniture, ceramic, glass, metalwork, posters, graphic art and paintings.

Czech Cubism made Prague one of Europe’s avant-garde centres in the years preceding WWI, as artists who had become exposed to contemporary art in their studies abroad, particularly in Paris, returned home eager to usher in newly discovered trends pioneered by the likes of Pablo Picasso and Georges Braque. On the ground floor Gallery Kubista sells all manner of Cubist-inspired products.

On Old Town Square the Kinsky Palace sports one of Prague’s finest Rococo facades. Recent exhibitions have featured Rembrandt and French Impressionism. One of its earlier uses was as the secondary school that Franz Kafka attended and where his father ran a shop.

The jewel of Czech functionalist architecture and once the largest building of its kind in the world, the Trade Fair Palace (the name indicates its original use when first opened in the 1920s) was rebuilt after almost being completely destroyed by a fire in 1974. Today it shows Czech and international modern and contemporary art, including works by Picasso, Georges Braque, Auguste Renoir, Vincent van Gogh and Gustav Klimt.

Prague’s newest art museum is the Kunsthalle Praha, one of the Czech republic’s few privately run art institutions. Housed in a former electrical substation. it stages six to eight exhibition a year in cooperation with Czech and international artists and curators. The Kunsthalle has its own collection of some 500 works plus a further 1,500 on long-term loan, including from Tate Modern in London and the Pompidou Centre in Paris, intended to present Czech and Central European art in a wider international context. 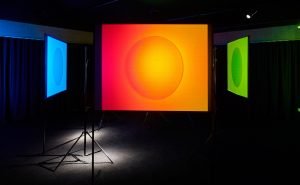 From Kineticismus: 100 Years of Electricity in Art, the inaugural exhibition at the Kunsthalle Praha

Rather than a castle in any traditional sense, Prague Castle is really a small town in its own right. According to the Guinness Book of World Records the world’s largest castle complex, this cluster of palaces and ecclesiastical buildings in various architectural styles dating from the 10th century onwards is also the burial place of Czech saints and monarchs.

The centrepiece of the complex is the magnificent St Vitus Cathedral, its towering spires visible from all over Prague. Art Nouveau insinuated its influence into the hallowed walls in the form of three stained glass windows designed by Alphonse Mucha. Art is also represented in the former Imperial Stables, which now host a series of exhibitions under its vaulted ceiling.

Prague Castle is also home to the oldest and largest privately owned art collection in the Czech Republic. Now a museum, the Lobkowicz Palace is home to a collection which reflects seven centuries’ of the cultural, social, political and economic life of central Europe. Among its collection of some 1,500 paintings by artist such as Canaletto Rubens, Cranach, Velazquez and Veronese is Pieter Bruegel the Elder’s Haymaking (1656), one of six panels by the artist, each depicting two months (here, June and July) and of which only five still exist – one here, one in the Metropolitan Museum of Art in New York and three in Vienna’s Kunsthistorisches Museum.

Among the other highlights are the first printed edition of the Beethoven’s Symphony No. 3, the ‘Eroica’, dedicated to his patron the7th Prince Lobkowicz and two astonishingly detailed views of the Thames and London by Canaletto, considered to be the most accurate visual record of the city in the mid-1700s.

The Czech capital is famous for its public art and no sculptor has contributed more to that reputation than the city’s own David Cerny, whose works are often controversial, sometimes outrageous and always humorous. Cerny first gained notoriety in 1991, when as an art student he painted a Soviet tank pink. Even though for most Czech citizens the tank symbolised the repressive Communist regime which had ended two years earlier in the Velvet Revolution, as the Monument to Soviet Tank Crews it was still a national cultural monument. Cerny’s act of civil disobedience was considered “hooliganism” and he was briefly arrested. Since then Cerny has continued to leave his mark in public spaces throughout Prague.

Visitors walking along Husova Street may be surprised to look up to see Viselec (Hangman), a fellow said to resemble Sigmund Freud dangling by one hand from a pole several storeys up.

The sound of laughter is a clue that you are approaching Proudy (Streams), two naked bronze men urinating into a large puddle in the shape of the Czech Republic. Their computer-controlled penises spell out quotations from Czech literature with their pee. It is somehow appropriate that they stand in the courtyard of the Franz Kafka Museum.

In the endearingly shabby Lucerna Palace shopping arcade Kun is an upside down horse (‘kun’ in Czech) and an amusing alternative to the famous St Wenceslas statue in nearby Wenceslas Square.

Cerny has also installed a group of babies climbing up a TV tower, while Quo Vadis is made from a gold-painted Trabant, the boxy little car which has become a symbol of Communist East Germany. ‘Walking’ on four human legs in the former grounds of the West German embassy, it is a monument to the 4,000 people who fled the regime prior to the 1989 fall of the Berlin Wall and camped there, seeking political asylum. 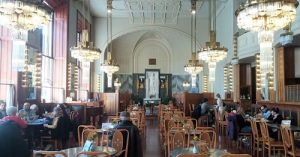 The Czech capital is rivalled only by Vienna for its classic cafes, and some of these chandeliered ‘kavarna’ combine art and design in fin de siecle ambience. They include the Grand Cafe Orient in the House of the Black Madonna (home to the Museum of Czech Cubism), the Cafe Savoy, where during the Communist era the beautiful ceiling frescoes were considered too bourgeois and were hidden behind a false ceiling, and the sumptuous Municipal House, which hosted the first exhibition of Czech Cubism in 1912.