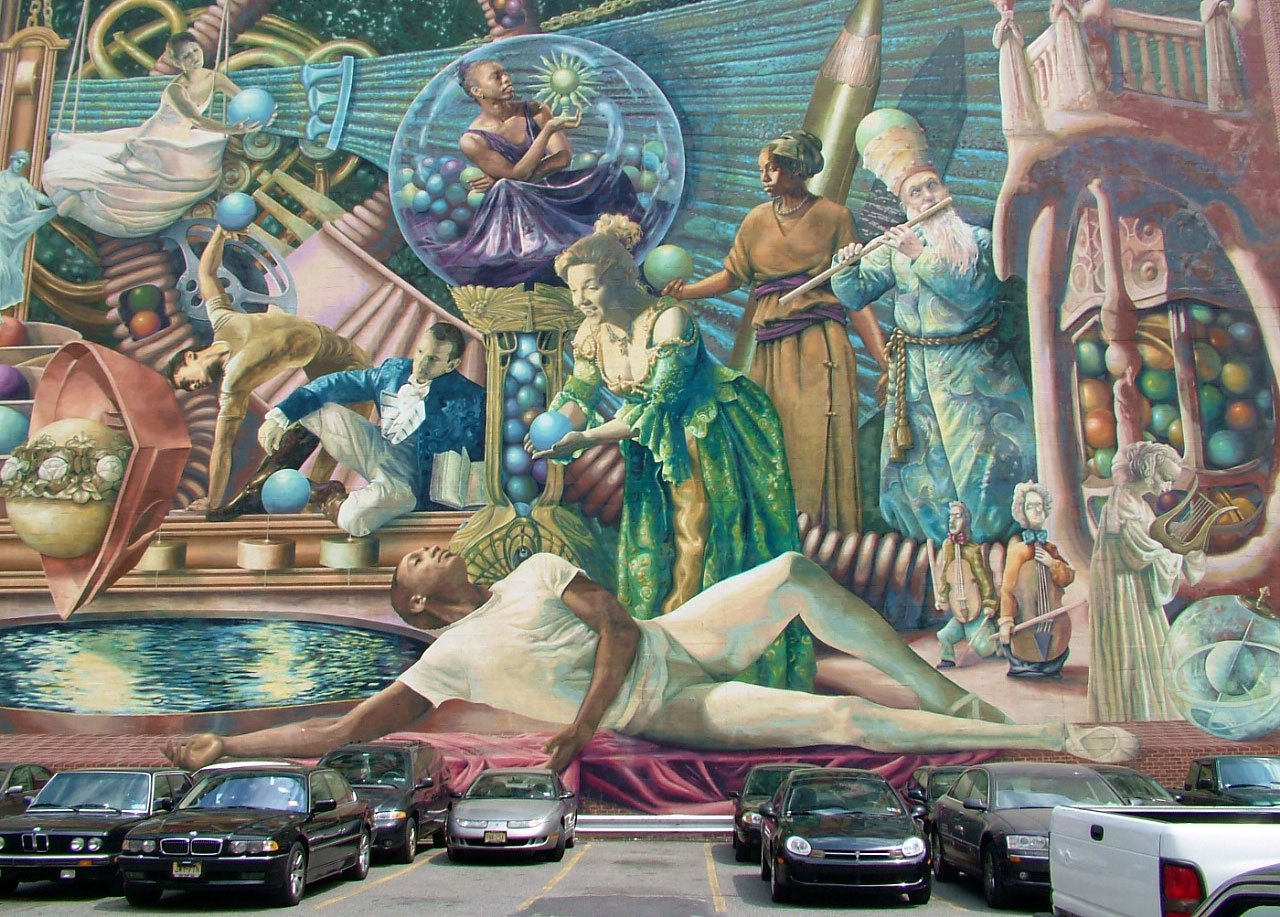 Philadelphia is becoming a “must see” for art-lovers 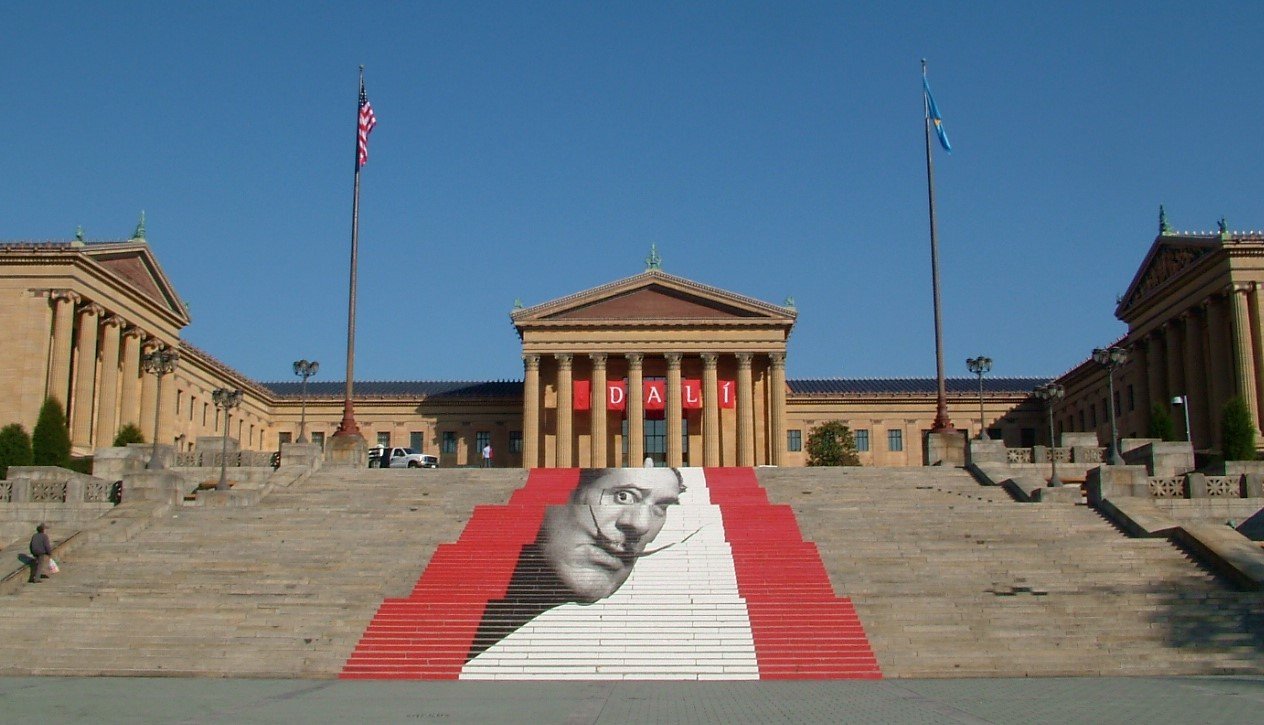 Once the largest city in “British North America”, Philadelphia was founded in 1682 by the English Quaker William Penn, who gave it the Greek name for ‘city of brotherly love’ to reflect his views on religious tolerance. Independence was declared in the city in 1776 and it served as the new nation’s capital while Washington D.C. was being built.

Unlike most US cities, Philadelphia has retained many of its original 17th and 18th century buildings, and in the Old City district some of the narrow, cobbled streets lined with red brick houses do a good impersonation of Edwardian England. Learning the lesson of the Great Fire of London of 1666, the city’s founders introduced the classic grid system to prevent the spread of flames – the first time an American city was laid out in this now familiar pattern.

Three of the city’s top galleries are located along the Benjamin Franklin Parkway, modelled after the Champs-Elysees in Paris and dubbed Philadelphia’s “Museum Mile”.

The Barnes Foundation debuted in its new home in 2012 after decades of controversy around the wishes of its late founder, Dr Albert C. Barnes, to keep it in its original home, a mansion in the suburbs. The exterior is clad in fossilised limestone crowned by a luminous light box and set in an inviting public garden with an arboretum of cedars and Japanese maples. Approaching the entrance, visitors pass a 40-foot abstract sculpture by Ellsworth Kelly overlooking a reflecting pool. Inside the rooms replicate the dimensions and shapes of the collection’s original home, with each artwork in exactly the same place as before. A brochure in each room identifies every piece on the walls. 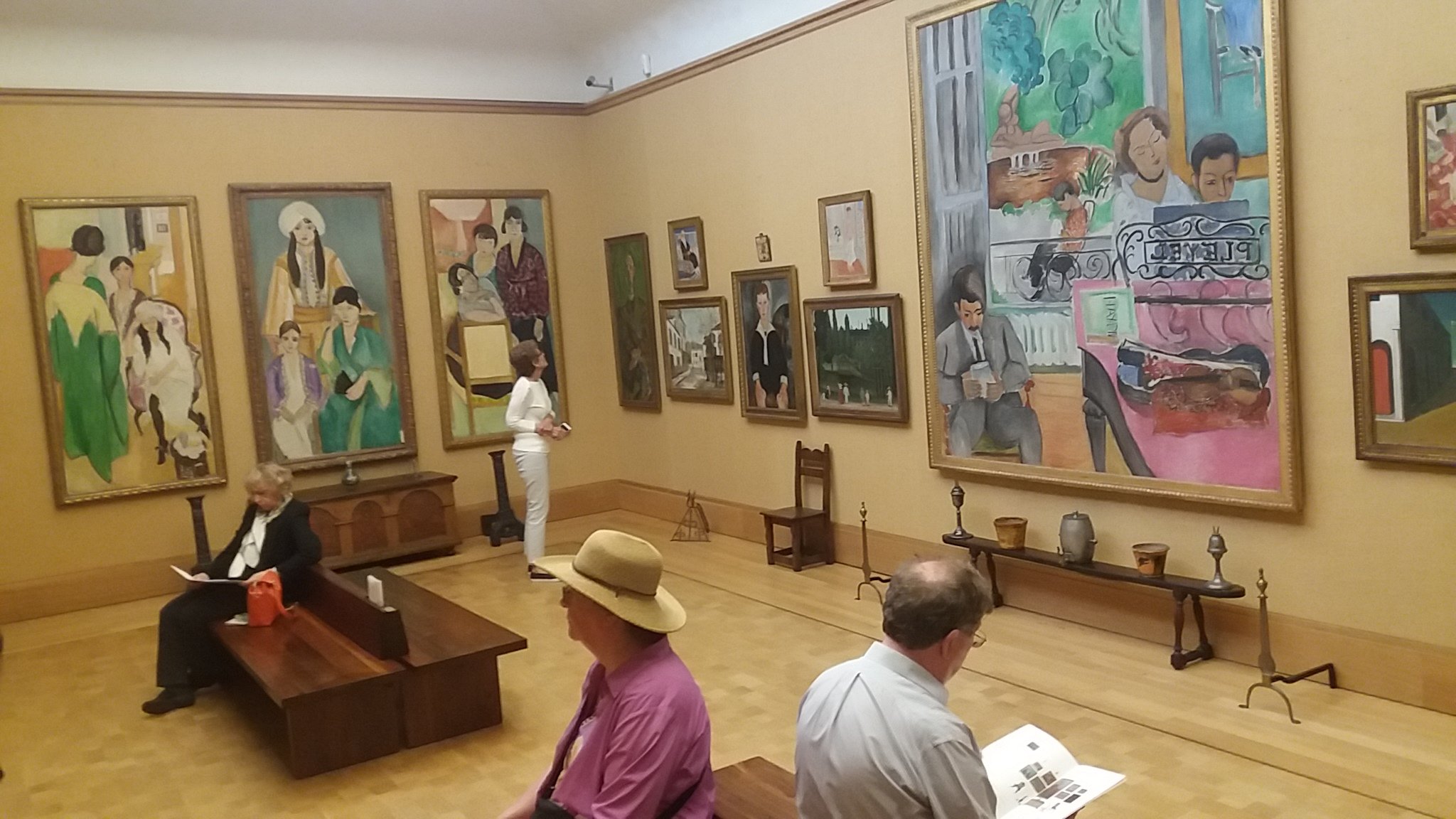 The Barnes is home to one of the world’s finest collections of Impressionist, Post-Impressionist and early Modern paintings. It boasts a number of world superlatives, including the largest single group of Pierre-Auguste Renoir’s works (181), the largest single group of Paul Cézanne paintings (69) and the largest collection of Modigliani paintings (12, a number equalled only by the National Gallery of Art in Washington, D.C.). Throw in 59 Matisses, 46 Picassos and works by (deep breath) Degas, Van Gogh, Seurat, Rousseau, Soutine, Monet, Manet, El Greco, Rubens, Titian and Veronese, among many others, and you have a collection numbering over 3,000 pieces fit to rival any art museum in the world. There is also African sculpture, ceramics, Native American crafts, Egyptian, Greek and Roman artefacts and American and European decorative arts.

A short stroll further up Benjamin Franklin Parkway is the Rodin Museum, which with its elegant, light-filled, Beaux Arts-style building and formal French garden might have been transplanted from Paris. Opened in 1929, the museum houses the largest Rodin collection outside Paris, with nearly 150 bronzes, marbles and plasters representing every career phase of the artist widely regarded as the father of modern sculpture. 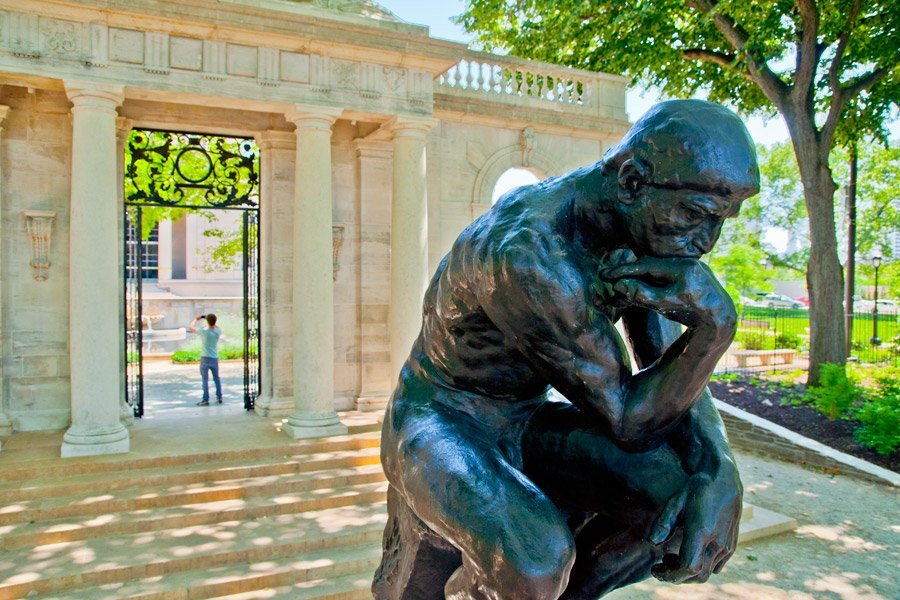 ‘The Thinker’ greets visitors to the Rodin Museum

Visitors are first greeted by The Thinker, the six figures of The Burghers of Calais appearing to walk to their seemingly imminent martyrdom and The Three Shades, depicting ghosts from the underworld. The towering bronze doors at the entrance are The Gates of Hell, which Rodin was originally commissioned to create for a decorative arts museum in Paris which was never realised. Left in plaster at Rodin’s death, the first two bronze casts were made for Jules Mastbaum, the museum’s founder. The second was given to the Musée Rodin in Paris.

For a long time Philadelphia’s unrivalled premier art museum – it is now getting a run for its money from the Barnes Foundation – the monumental, Greek-style Philadelphia Museum of Art stands proudly at the top of the Benjamin Franklin Parkway, its three adjoining ‘temples’ with fluted columns supporting a blue-tiled roof topped by bronze griffins. (Film fans may recognise it as the finishing point of Sylvester “Rocky” Stallone’s training regime.) 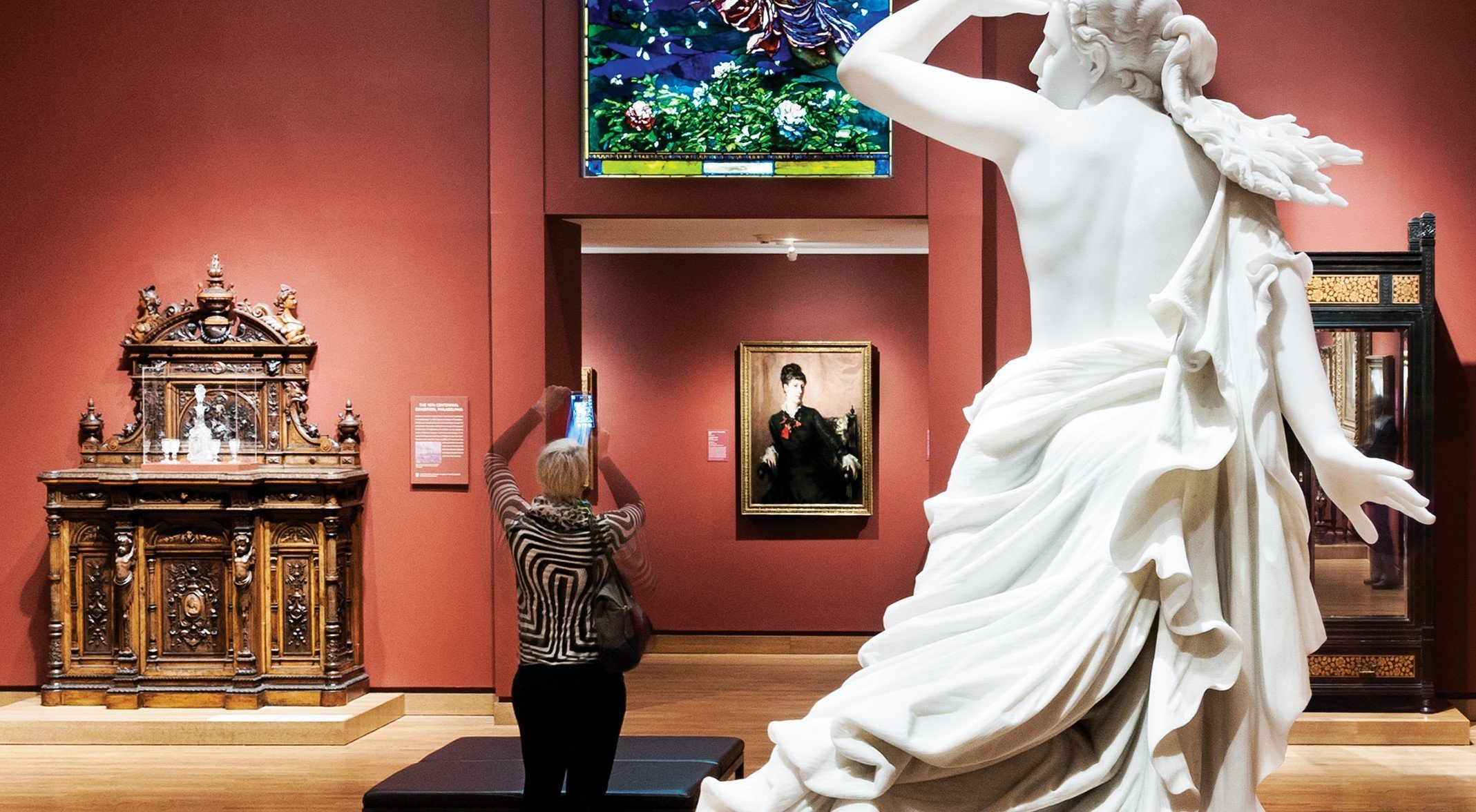 One of the country’s largest art museums, the PMA has 200 galleries showing nearly 250,000 works spanning 2,000 years and every continent and including painting, sculpture, decorative arts and architectural settings. These include an Indian Hindu temple, a Japanese Buddhist temple and entire American Period rooms furnished from historic houses.

As part of a development led by the “starchitect” Frank Gehry, the museum has unveiled new galleries dedicated to American art from 1650 to 1850 and modern and contemporary art, representing the largest expansion of gallery space since the museum opened in 1928. 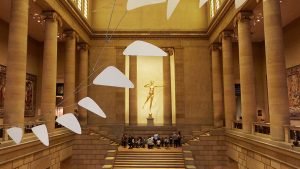 The Great Stair Hall in the Philadelphia Museum of Art

The modern and contemporary collections include works by the likes of Picasso, O’Keeffe, Matisse, Duchamp (the world’s largest collection), de Kooning and Pollock, while in the 19th century European and Impressionist galleries you will find Brancusi, Degas, Renoir, Manet, Van Gogh and many more. Other galleries are devoted to Prints, Asian Art and Drawing and Photographs. Don’t forget to walk around the one-acre Anne d’Harnoncourt Sculpture Garden or visit the nearby Perelman Building, the Art Deco annex with its own exhibition programme and the first phase of a master plan to expand and modernise the museum under the famed architect Frank Gehry.

Founded in 1805, the Pennsylvania Academy of the Fine Arts was the first art museum and school in the US. Many prominent American artists trained there, including Mary Cassatt, Maxfield Parrish, Thomas Eakins, the film-maker David Lynch and Alexander Calder. The Academy occupies two buildings. Its former Victorian Gothic home is an architectural jewel admired for its floral motifs, stained glass, exposed iron beams, marble and coloured sculptural features (polychromy). It is now a museum housing a collection of 19th and 20th century American paintings, sculptures and works on paper. Next door is the modern school. 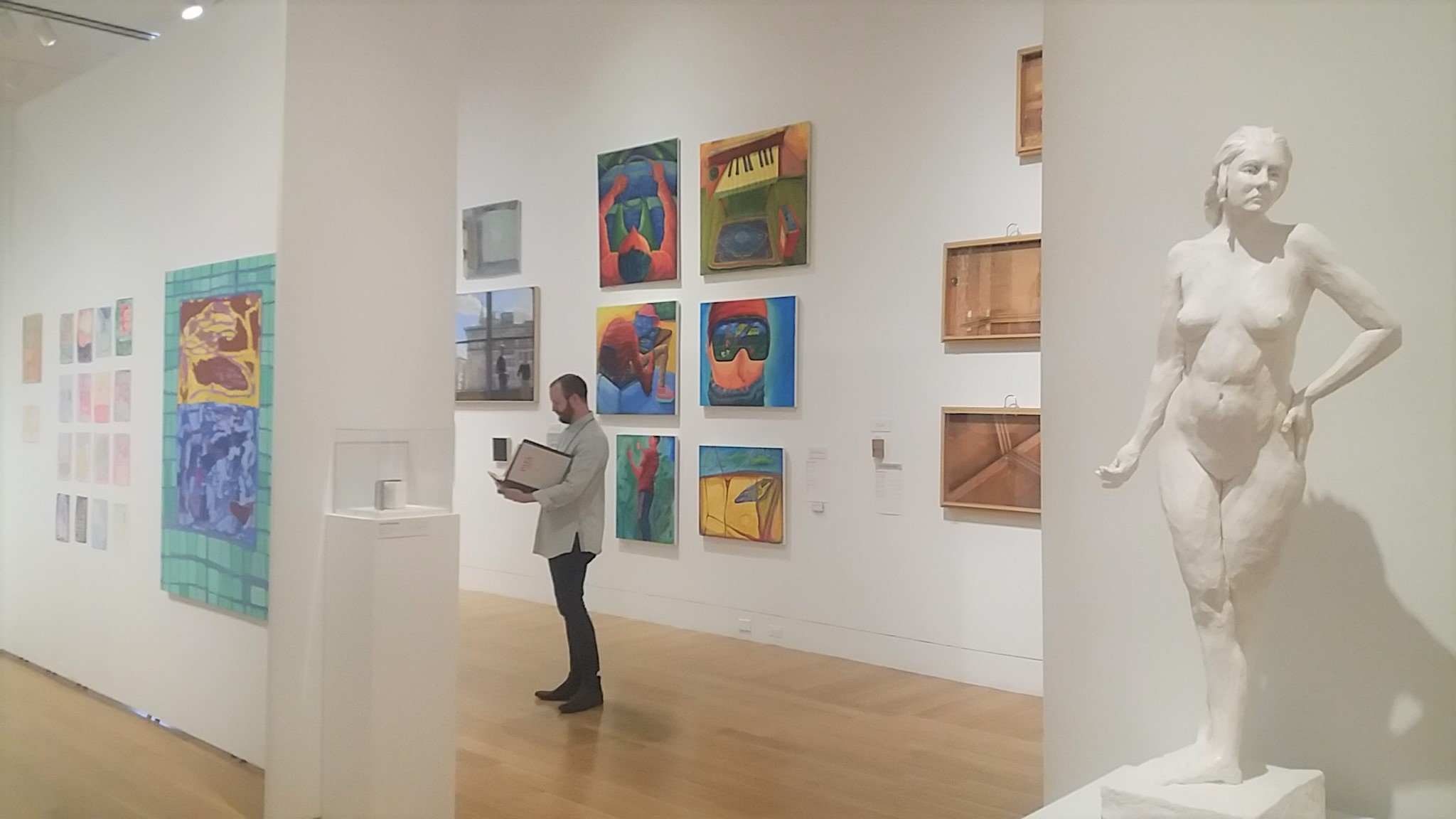 Annual Student Exhibition at the Pennsylvania Academy of the Fine Arts

The only institution in the US devoted to creating work in new materials and media, the Fabric Workshop and Museum presents a series of exhibitions by invited artists from a variety of disciplines, including sculpture, installation, video, painting, ceramics and architecture. There is also a major artist in residence programme which enables artists at all stages of their career to experiment with new materials in the well equipped studios and workshops. These are accessible to the public to see artwork from conception to completion. The 5,000-piece permanent collection includes works by Louise Bourgeois and Anish Kapoor. 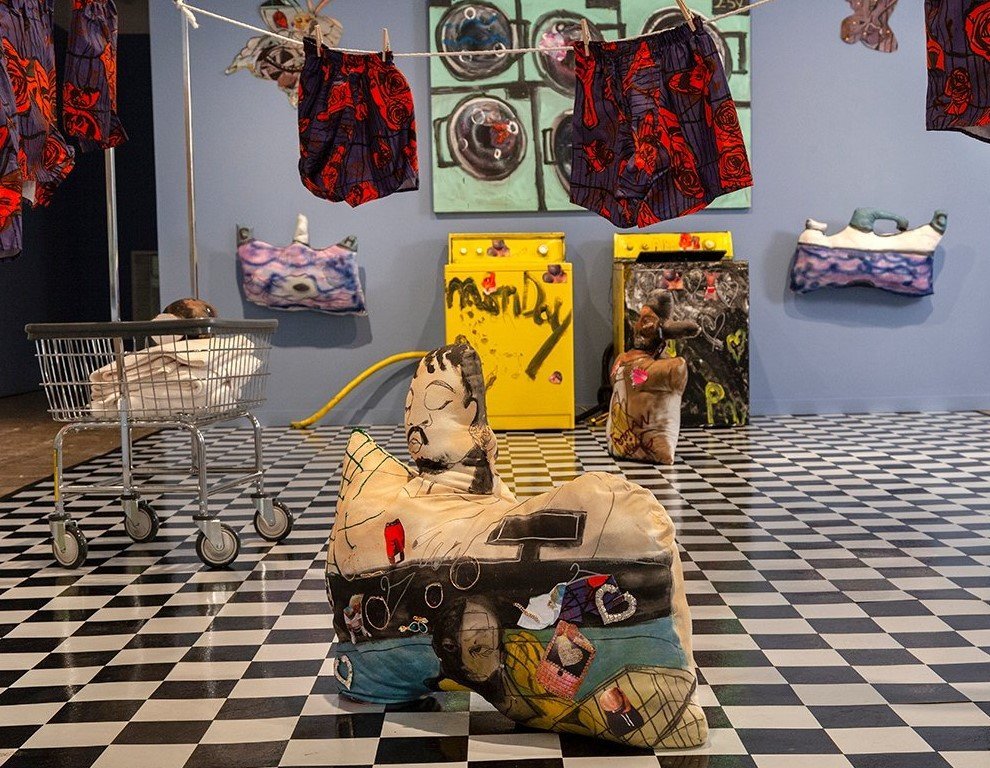 Part of the University of Pennsylvania, the Institute of Contemporary Art is Philadelphia’s premier contemporary art museum. Founded in 1963 by a visionary dean of the school of architecture who wanted to expose students to what was “new and happening” in art and culture, ICA is a non-collecting museum along the lines of the European ‘Kunsthalle’. As part of its aim to bring under-recognised artists to the attention of the broader world, it organised Andy Warhol’s first solo museum show in 1965 and also presented early shows by artists such as Laurie Anderson and Robert Mapplethorpe. 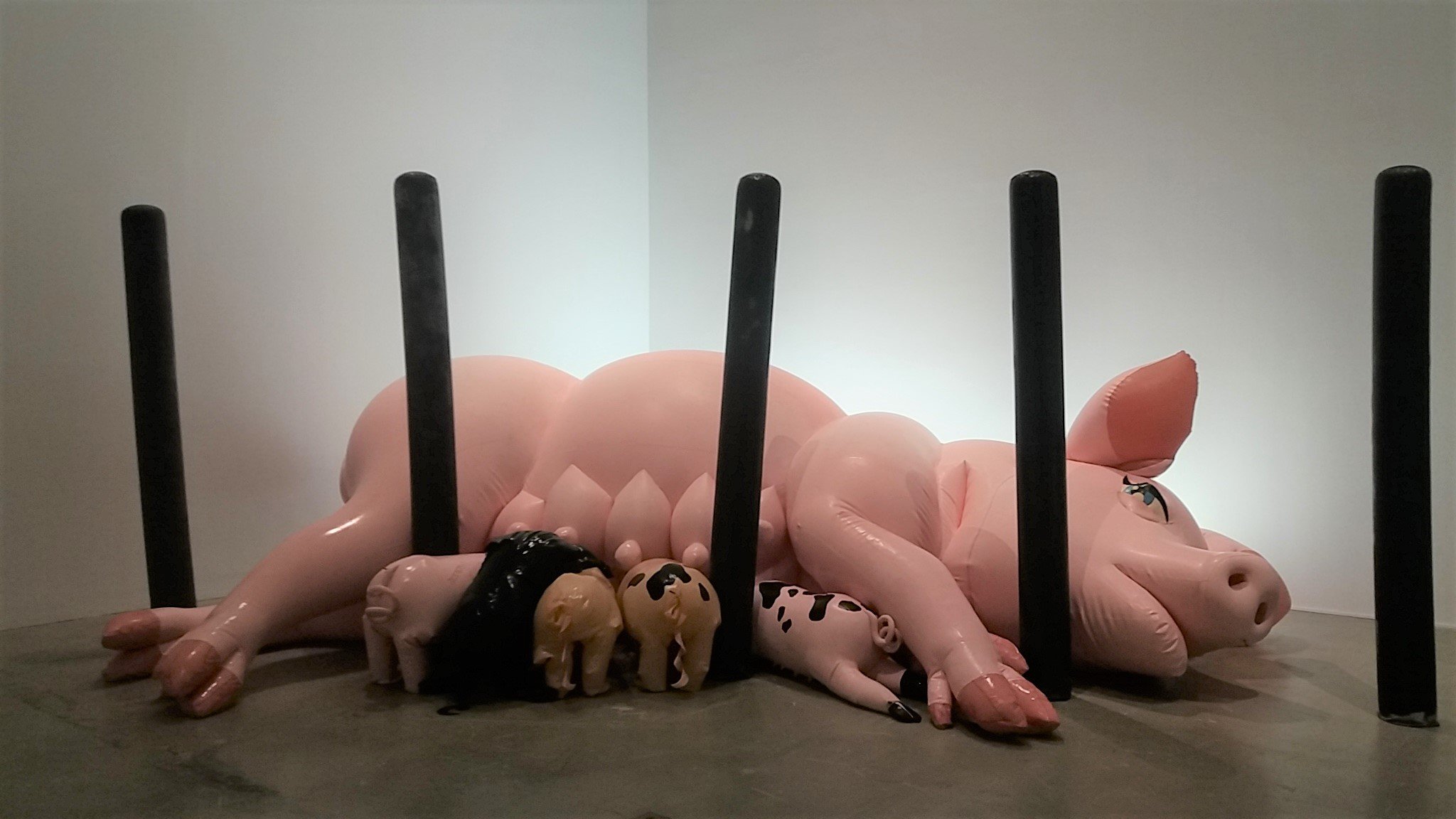 Spanning half a block on Philadelphia’s hip South Street, the Magic Gardens is an immersive, labyrinthine outdoor art installation using non-traditional materials such as folk art statues, found objects, bicycle wheels, colourful glass bottles, hand-made tiles and thousands of mirror fragments. The eye-popping display is the life’s work of Philadelphia-born mosaic mural artist Isaiah Zagar, who said: “My work is marked by events and is a mirror of the mind that is building and falling apart, having a logic but close to chaos, refusing to stay still for the camera and giving one a sense of heaven and hell simultaneously.” Zagar’s work is also held in the permanent collections of the Philadelphia Museum of Art and the Pennsylvania Academy of the Fine Arts. 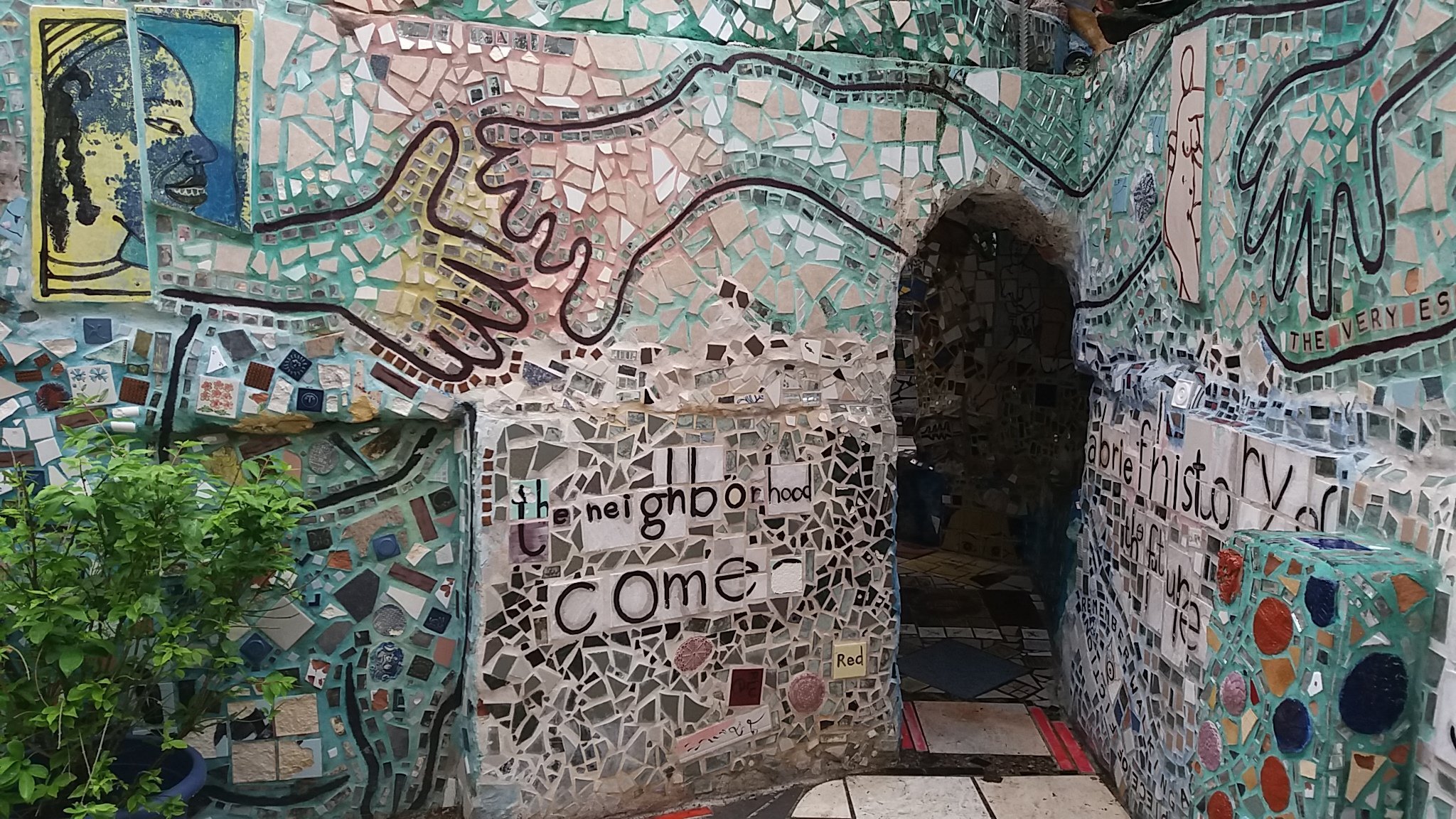 Philadelphia is home to the the country’s largest public arts programme. Dubbed “the mural capital of the world” or “the world’s largest outdoor art gallery,” the city’s vacant lots are often overlooked by huge murals covering the whole side of a building. Originally begun as part of an anti-graffiti programme, Philadelphia murals are community projects, with 50 to 100 new pieces commissioned each year. When a space becomes available, permission to paint on it must be obtained from the wall owner, who also becomes the owner of the mural. The local neighbourhood then decides what kind of art they would like to see, whereupon artists are invited to submit ideas, with the community having final approval of the design.

Mural Arts Philadelphia offers tours of various neighbourhoods, when guides share stories about the people and communities which inspired and shaped each project. Self-guided tours are made easier with the help of plaques attached to the wall next to each mural with a telephone number visitors can call to listen to its story.

In 1959 Philadelphia pioneered the Percent for Art programme, which requires developers to include site-specific public art in new construction projects. Replicated in cities across the country, this ground-breaking model has resulted in over indoor and outdoor public 600 artworks, more than any other American city.

One of Philadelphia’s most imposing buildings, City Hall, reflects Philly’s extraordinary love for public art. No fewer than 250 sculptures adorn it, all created by Scottish-born Alexander Milne Calder, whose grandson, also named Alexander and known as Sandy, became one of America’s most important 20th century sculptors, particularly famed for his mobiles. City Hall is topped off by a 37-foot high statue of Penn, the tallest on any building in the world. 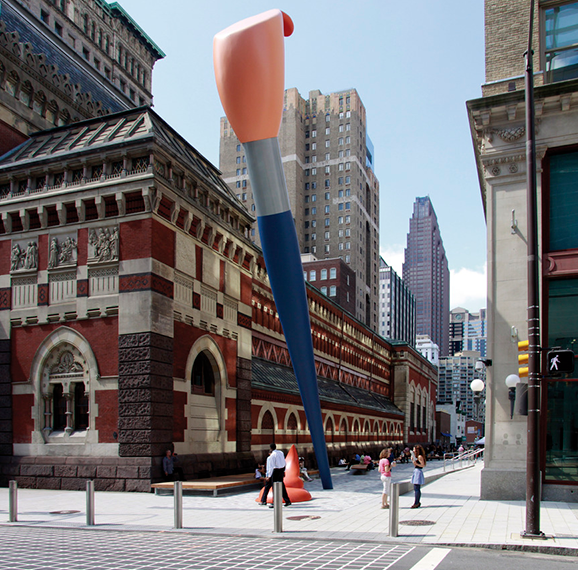 Other highlights include: Robert Indiana’s Love sculpture, an icon of American pop culture, at JFK Plaza; Claes Oldenburg’s huge Clothespin (or is it lovers embracing?) opposite City Hall; Jordan Griska’s Grumman Greenhouse, a decommissioned Grumman S2F Tracker airplane, which seems to have crashed into the ground next to the the Pennsylvania Academy of the Fine Arts (and now houses plants); and, also next to the Academy, Claes Oldenburg’s 51-foot high Paint Torch, a giant brush dripping ‘paint’ onto a huge blob below. At night it lights up and changes colours. 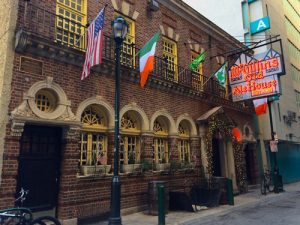 The city’s longest continuously operating bar is McGillin’s Olde Ale House, which displays every liquor license it has had since 1860. 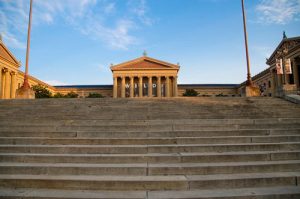 The broad stairway leading up to the Philadelphia Museum of Art have been dubbed the “Rocky steps” after Sylvester Stallone finished his training regime at the top of them. A statue of him at the foot of the stairs is a favourite selfie spot. 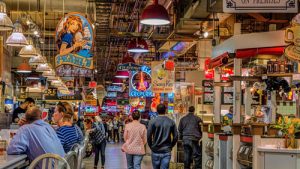 Food counters in the covered, 100 year old Reading Terminal Market are laden with vegetables, meat, seafood, confectionery, baked goods, flowers, local crafts and other gift items. The banter is lively and there is often live music played on the resident upright piano. The Italian Market is the USA’s oldest and largest outdoor market. Strung out along several city blocks, many of its traders are direct descendants of founding Italian families. There is a tantalising aroma of spices, fresh pastries, home-made pastas, cheeses and olive oils.

Independence National Historical Park is dubbed ‘America’s most historic square mile’ due to a cluster of buildings where the United States was born. A tour takes in Independence Hall, the Liberty Bell Center (where Philadelphia’s icon of freedom is displayed), Carpenters’ Hall (where the First Continental Congress met to oppose British rule) and the National Constitution Center, opened, fittingly, on the 4th of July 2003. Philadelphia was the first capital of the United States while Washington was under construction.

In the Old City historic district, the one block long Elfreth’s Alley is believed to be America’s oldest continuously inhabited street, dating from 1713, while at 221 Pine Street is the narrowest house in town, previously occupied by a 4’10” woman, now deceased.