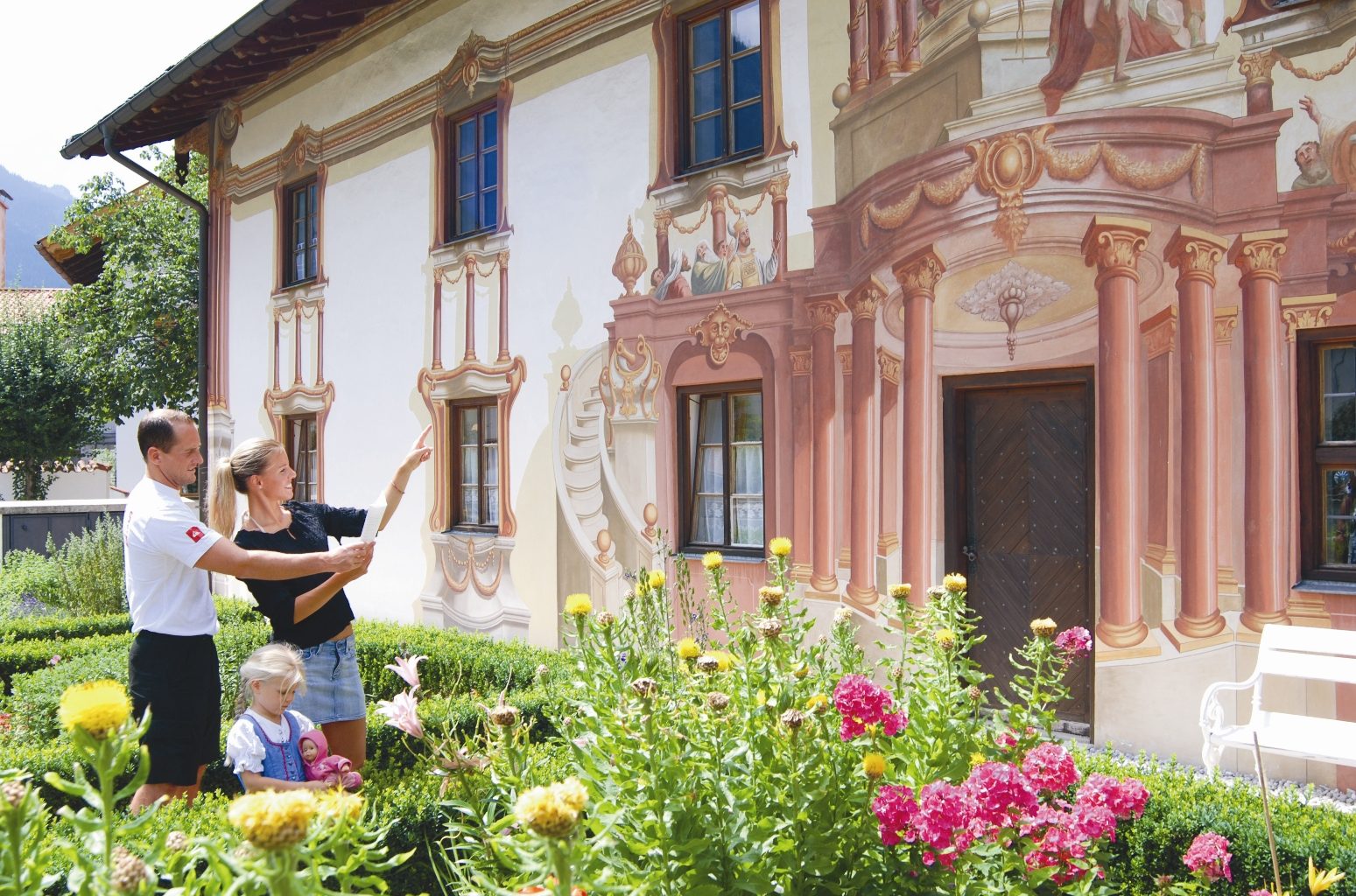 Nestling in an emerald plain surrounded by soaring mountains, Oberammergau (Ober = Upper, Ammer = name of a river, Gau = district) is a pretty cluster of giftshop–lined streets which thrives from a unique blend of commercialised Christianity and the centuries-old tradition of woodcarving. Just over 40 miles (65 kilometres) southwest of Munich, its place on the world map is due to an extraordinary event held there in the first year of every decade.

The background: In the first half of the 17th century a deadly plague, the “Black Death” (bubonic plague), swept through central Europe, spread not least by several armies criss-crossing the continent during the Thirty Years War. Deep in Bavaria near the border with Austria, the village of Oberammergau was initially untouched by disease due to a strict quarantine which prevented any living thing from entering or leaving. However, one night in 1632 a man who had been working in a nearby village evaded watchmen to visit his family. Within a few days disease struck, resulting in over 80 deaths.

The inhabitants of Oberammergau vowed that, if the plague ended, they would stage a passion play every ten years in praise of God. The epidemic did indeed pass and, believing in divine intervention, the villagers were true to their word and staged the first play in 1634. Today their descendants uphold their vow to ring church bells every Sunday at four in the afternoon as long as the plague stays away.

The Passion Play has become the world’s largest stage production. Anyone born in Oberammergau or who has lived there for at least 20 years is entitled to join the 2,300-strong cast, all amateurs, including up to five hundred children and technical crew, not to mention livestock such as sheep, goats and the donkey Jesus rides into Jerusalem, when some 600 people are on stage at the same time (the director is obliged to create a crowd scene to accommodate everyone who wants to be in it), while an orchestra plays live under it. A German cultural commentator declared on radio: “The elemental passion for theatre of the Oberammergau people may well be unique. This village lives off acting. This village lives for acting.”

The 4,600-capacity Passion Play Theatre
It’s easy to spot the male cast members due to appear in the next production. They’re the hirsute ‘Herren’ who not allowed to shave or cut their hair from Ash Wednesday (late February) of the previous year until the performances are over – more than eighteen months. Casting has undergone cultural and social change. Previous directors have refused to cast young actors because they did not agree with the politics of the ‘60s generation, while at one time only unmarried women under 35 could participate until a 1990 court case granted all women the same rights as men.

From its beginnings on a makeshift stage in front of the local church, this enactment of the life and death of Jesus Christ has grown over the centuries to fill the custom-built Passion Play Theatre over a hundred times every season. Built in 1900 to seat 4,600 (when the village had only 1,000 inhabitants), the structure is made of more metal than the Eiffel Tower. There are behind the scenes guided tours of the venue, when visitors get a peek into the props room, costume department and orchestra rehearsal room and begin to understand the scale of the event.

In 1880 the Thomas Cook travel agency ‘discovered’ Oberammergau and package trips were offered for the first time. Over the years attendees have included royalty, motorcar pioneer Henry Ford, Hollywood director Billy Wilder (who complained that it was antisemitic) and Adolf Hitler, who in 1934 – the year the Nazis co-opted the play and Goebbels supervised its promotion – sat in the same row as avowed Communists Jean-Paul Sartre and Simone de Beauvoir and expressed pleasure that Jews were portrayed in a poor light.

Staged between May and October, each performance of the play comprises two parts lasting two and a half hours each – one in the afternoon and one in the evening – with a 90-minute interval. Half a million visitors flocked to its most recent production in 2010. Since 1932, a prologue or ‘back story’ has been performed in the previous year in the form of ‘Die Pest’ (The Plague), which dramatises events leading up to the first staging of the Passion Play.

Oberammergau’s souvenir trade is driven by wood carving, which appeared in the Alpine region in the early 16th century as a means of subsidising farming in a rough climate, especially during the ‘dead’ days of winter. This evolved into a tradition of sculpture, especially of religious objects such as crucifixes and altarpieces, and eventually became a key industry producing a vast range items, from a finger-sized Mary to a full-sized Jesus. On the cross. The growing crowds visiting the Passion Play provided a ready-made market and today Oberammergau still has about 60 professional wood carvers. Favouring woods such as lime, pine, pear and maple, wood carvers turn out a bewildering array of figures and items, including – deep breath – nativity scenes, biblical characters, cherubs, saints, letter openers, salt and pepper pots, storage containers, farm livestock, wildlife, dolls, toys and soldiers – even whole armies.

Some of the finest pieces of wood carving can be seen in the Oberammergau Museum, where a huge array includes multi-piece displays such as a recreation of a royal hunt, the silver wedding celebrations of King Ludwig I of Bavaria and wife Therese and The Last Supper, modelled after Leonardo da Vinci’s famous fresco.

Another feature of the museum is its collection of reverse glass paintings. Admirers of this technique included members of the artists’ group The Blue Rider, who would visit from their painting retreat in nearby Murnau to collect reverse glass paintings and who used the technique to create their own works. One of the group’s founders, Gabriele Münter, attended glass painting workshops, while fellow members Franz Marc and Wassily Kandinsky selected nine pictures from the Oberammergau Museum’s collection for inclusion in The Blue Rider Almanac, which influenced the development of modern art. Throughout the museum works by contemporary sculptors complement the traditional displays.

Found all over southern Germany, ‘Lüftlmalerei’ (‘sky painting’) is a folk-oriented version of trompe-l’oeil painting used to create elaborate house murals. Subjects include saints, biblical stories, fables, sundials, hunting and everyday rural life. Banners with mottos are also popular. Following the traditional method, paint is applied to fresh lime plaster using a fresco technique which produces a chemical reaction to make the paintings durable. Today, other weatherproof painting materials are also used. One of the finest exponents was the Oberammergau facade artist Franz Seraph Zwinck(1748-1792), whose handiwork can be seen on the Pilatushaus (House of Pontius Pilate), where visitors can watch artists at work in a ‘live workshop’.