The cultural revolution continues in the Northeast of England

Once symbolic of the ‘grim north’ portrayed in gritty films and TV dramas, the conurbation of NewcastleGateshead (on the north and south banks respectively of the River Tyne) has undergone a dramatic transformation in recent years. Where once stood rotting relics of the long gone shipbuilding and import/export industries, world class cultural centres like the spectacular, Sir Norman Foster-designed Sage Gateshead and the Baltic Centre for Contemporary Art have revitalised the Tyneside waterfront, where the Quayside is now a pleasant promenade past river-facing restaurants and public artworks. 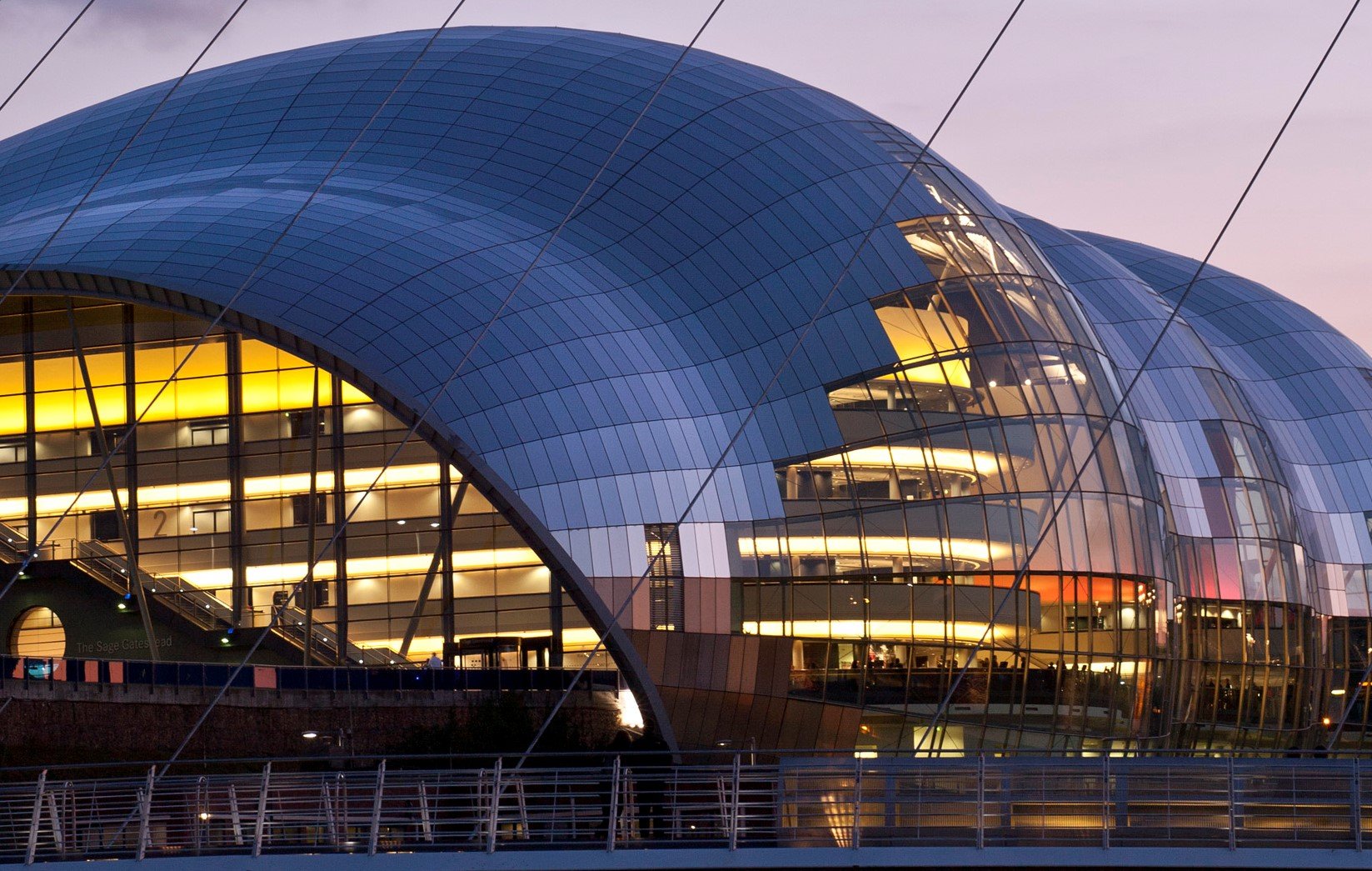 Many art groups have brought new life to disused industrial buildings, such as the Biscuit Factory, the Baltic Centre itself (in a converted flour mill) and 36 Lime Street, a complex of artists studios in an ex-brewery storage plant. There is also a range of public and commercial galleries showing work spanning the medieval period to the contemporary scene.

At the vanguard of the city’s cultural renaissance was the Baltic Centre for Contemporary Art. Situated on the south bank of the River Tyne in Gateshead and just a short walk over the Millennium Bridge from Newcastle Quayside, the Baltic boasts industrial-size rooms covering 2,600 square metres of exhibition space, making it the UK’s largest dedicated contemporary art institution. 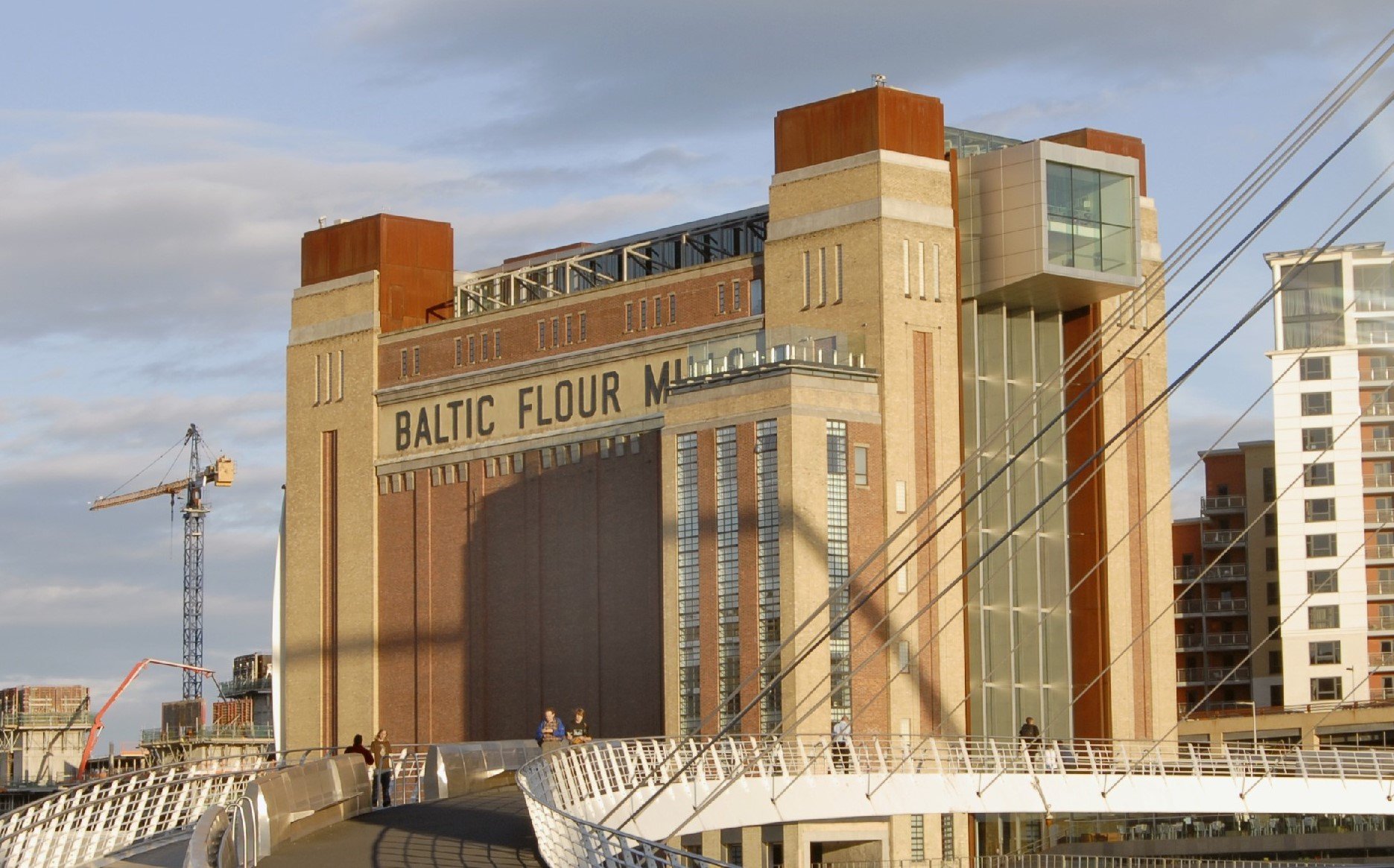 In acquiring an international reputation for contemporary art, it has welcomed more than eight million visitors over the years to experience free art and performances. It has no permanent collection, providing instead a changing programme of exhibitions and events, from blockbuster shows to new work and projects by artists working within the local community. The Baltic marks its 20th anniversary in 2022.

The leading cultural institution, Tyne & Wear Archives & Museums, operates three major public art galleries. Founded in 1901 with funds provided by a Newcastle businessman after whom it is named, the Laing Art Gallery (pronounced ‘Lane’), Newcastle’s main municipal gallery, is home to a collection of national importance focusing on British oil paintings, watercolours, ceramics, silver and glassware. Permanent displays are accompanied by regularly changing exhibitions of historic, modern and contemporary art. Over the years these have included shows on Monet, Van Gogh, Picasso and Leonardo da Vinci. 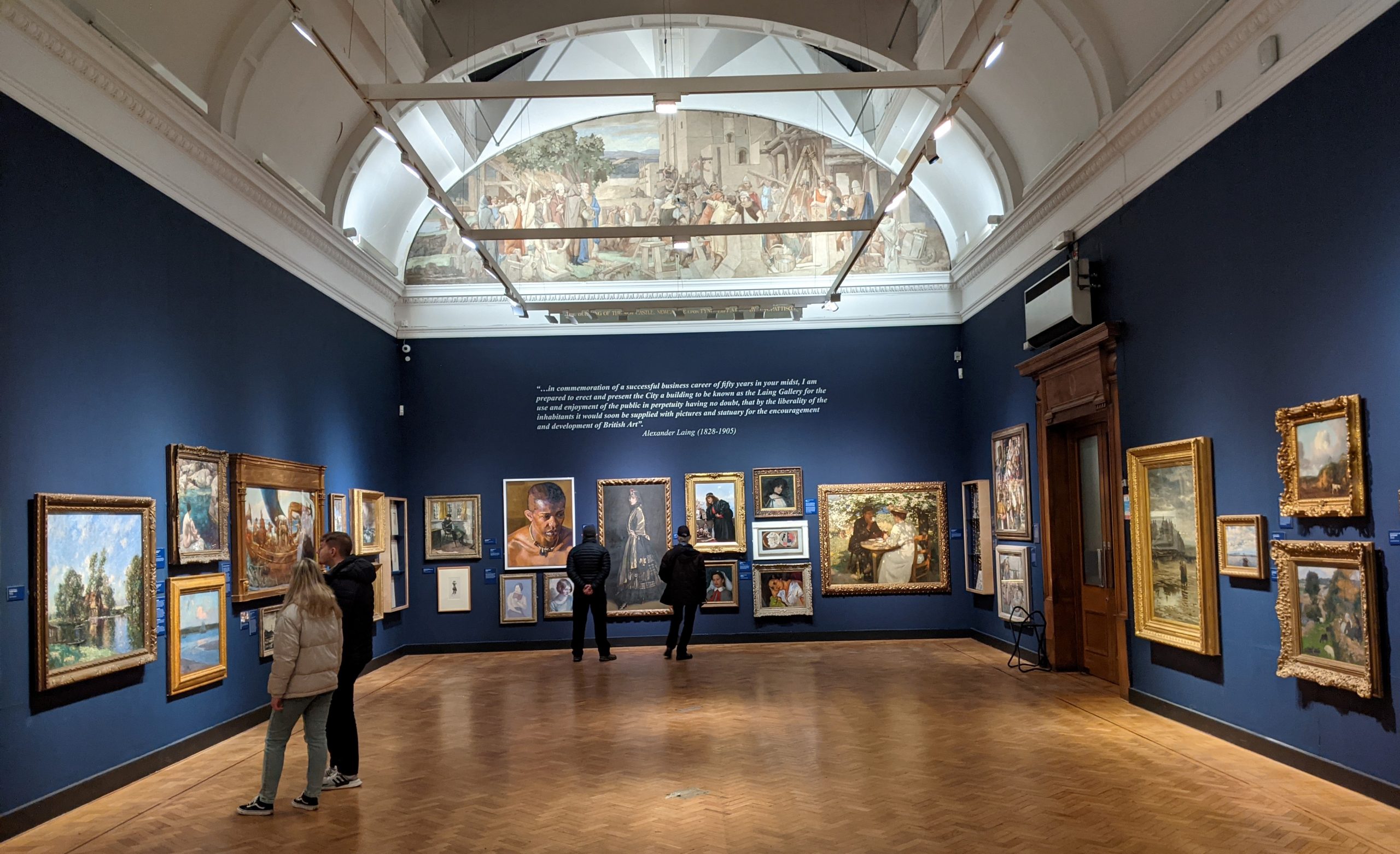 On the ground floor the Northern Spirit gallery has outstanding artwork by regional artists such as Thomas Bewick, John Martin, Victor Pasmore, Norman Cornish and Ralph Hedley (who dedicated his career to recording Northeast life) as well as members of the Cullercoats colony which gathered around the village of that name and depicted the Northumberland fishing communities and coast. There also objets d’art, including Newcastle silver, wood engraving (Gerrard Robinson’s The Boar Hunt is a particular marvel), glass and ceramics. 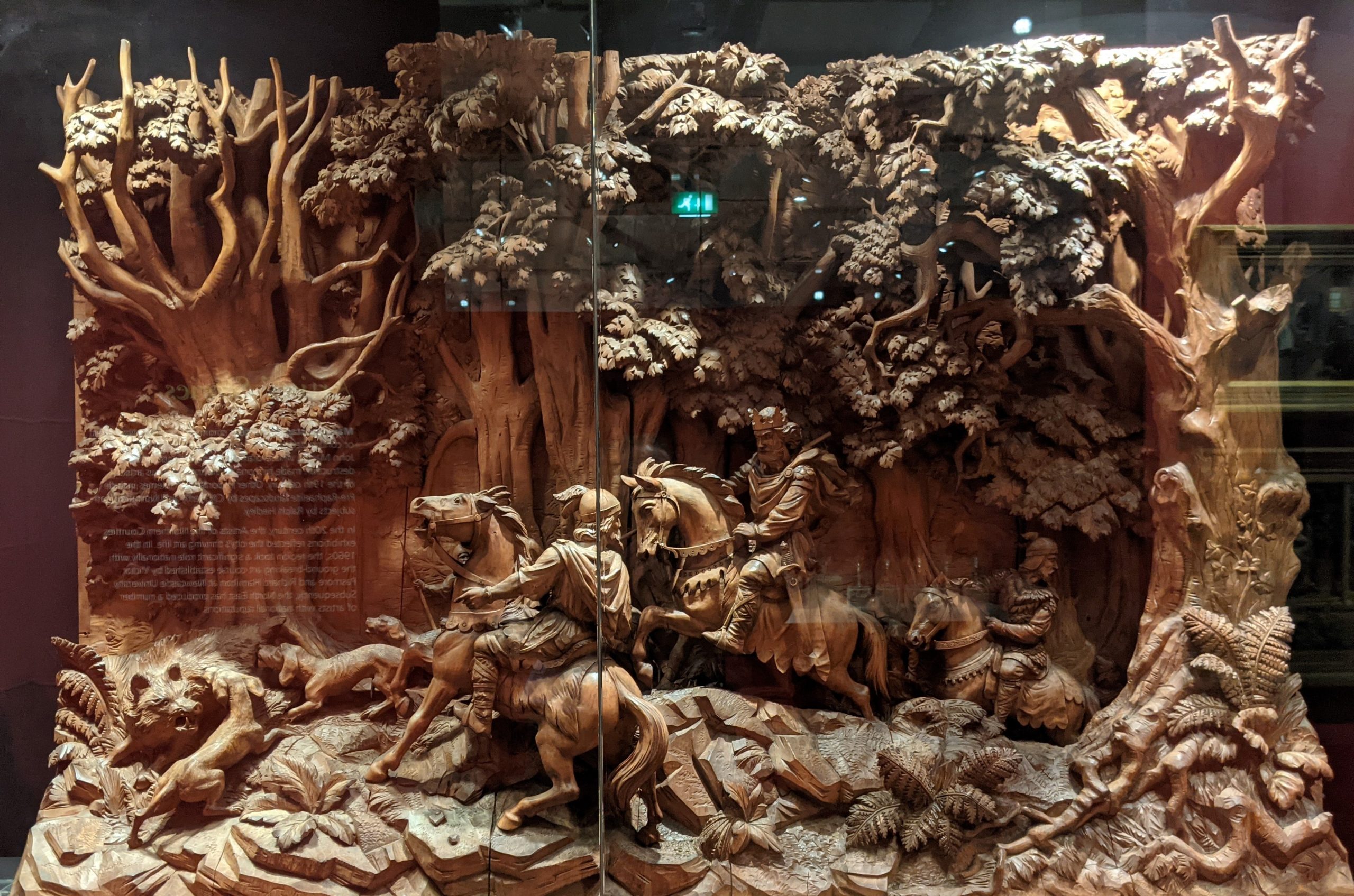 Upstairs is the 18th and 19th century display, including internationally important paintings by Gauguin, Burne-Jones, Whistler, Reynolds, Lowry, Turner and Gainsborough. Here is also the Newcastle in Watercolour section, which documents the changing character of the city over the centuries from a medieval walled town to a 19th century industrial powerhouse with grand, neo-classical buildings. Newcastle’s famous bridges – seven in all – feature prominently. 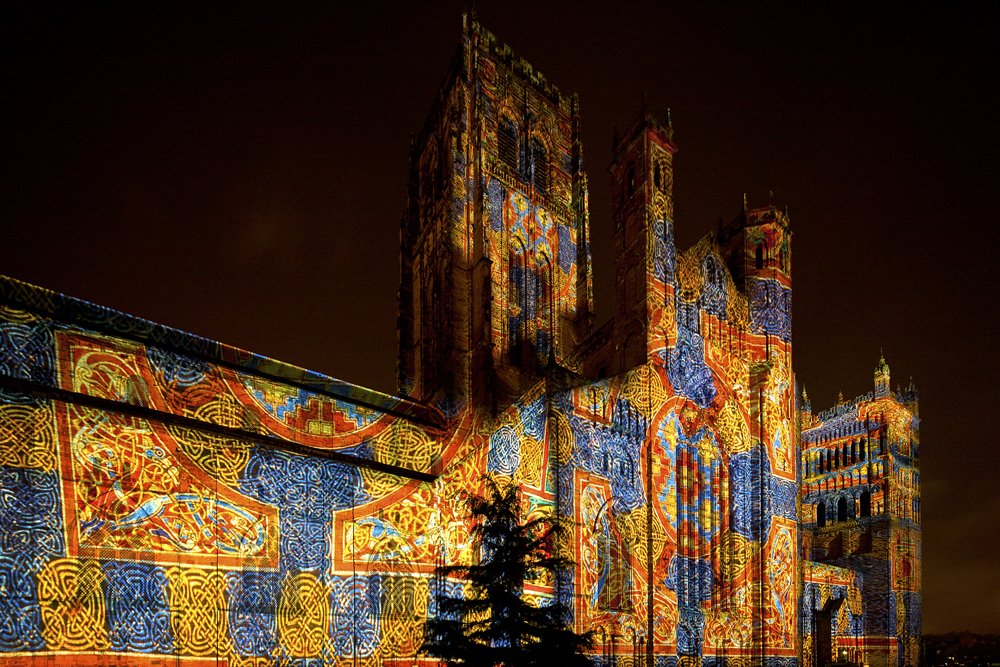 Part of the Lindisfarne Gospels is projected onto Durham Cathedral to promote the 2022 exhibition at the Laing Art Gallery. Photo: Graeme Peacock

In the ground floor cafe is a pair of large portraits of deer and wild cattle by Sir Edwin Landseer and two magnificent stained glass windows by Sir Edward Coley Burne-Jones, while the beautiful Marble Hall is occupied by works by Henry Moore and Turner Prize nominee Paul Noble.

On the Newcastle University campus the Hatton Gallery can reasonably claim to be the birthplace of Pop Art, having first exhibited Richard Hamilton’s seminal Man, Machine and Motion in 1955. (Hamilton taught at the university’s Fine Art Department.) The Hatton’s other main claim to fame is that it is home to German artist Kurt Schwitters’ remarkable Merz Barn Wall, a large, three-dimensional collage which he made in 1947-48 after fleeing Nazi Germany and settling in the English Lake District. 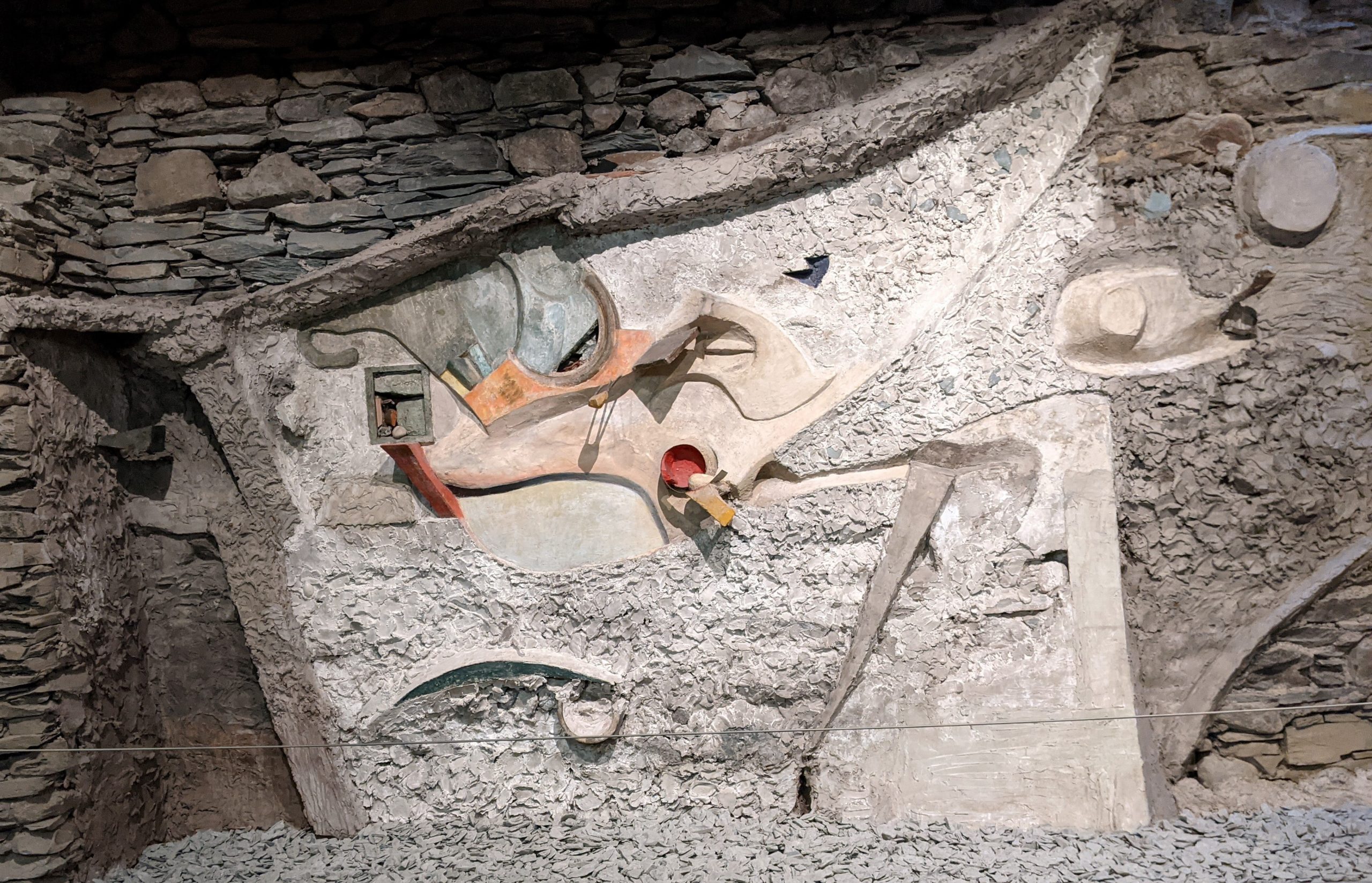 Schwitters had planned to cover all four walls of a small rented barn with his construction of stones, wood, plaster, paint, found objects and other detritus, but ill health and the knowledge that he had only months to live forced him to concentrate on one wall, which he was unable to finish. Richard Hamilton was instrumental in persuading university authorities to have the wall removed and permanently installed at the Hatton in 1965. It is Schwitters’ only surviving construction. Tragically, Schwitters died one day after being granted British citizenship. In 1931 he had said: “I know full well that the time will come for me and all other important personalities of the abstract movement when we will influence an entire generation. However, I fear that I shall not experience this.” 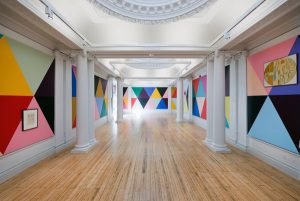 From Lothar Goetz: Fairground Abstraction at the Hatton Gallery

The Hatton’s diverse collection includes over 3,700 works from the 14th to the 20th centuries, including paintings by Francis Bacon, Eduardo Paolozzi, Richard Hamilton and Patrick Heron as well as prints, drawings and sculptures. There is a regular programme of modern and contemporary art exhibitions. 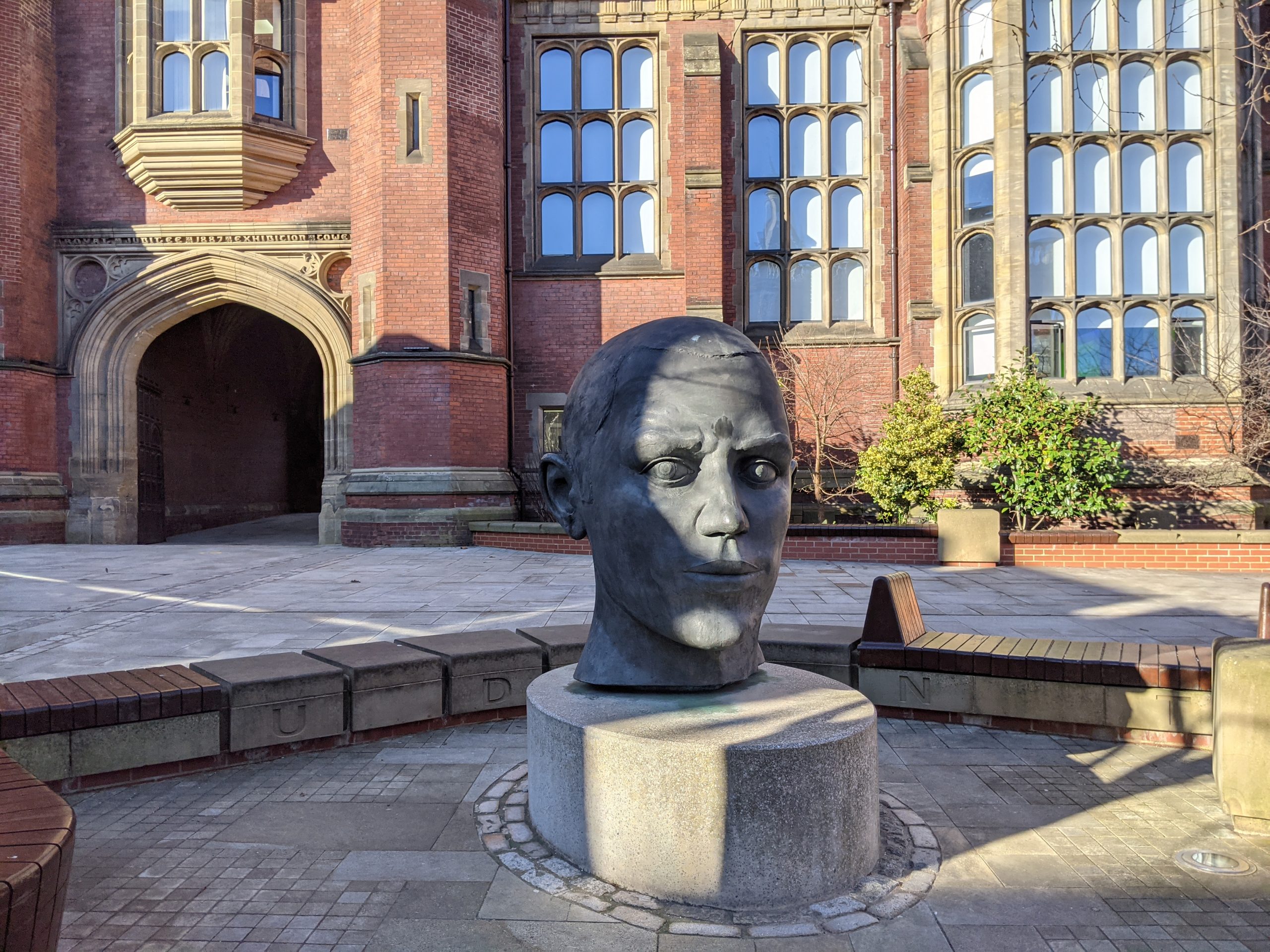 Next door to the Hatton, look out for ‘Generation’, a group of three large sculptural human heads in bronze and steel outside the Fine Art building

Over in Gateshead about a 15-minute bus or taxi ride from Newcastle city centre is the Shipley Art Gallery, which opened in 1917 with a collection of over 500 paintings bequeathed by local solicitor Joseph Shipley along with funds to build a gallery for them. Favourites include local painter William Irving’s spectacular and chaotic The Blaydon Races (1903) based on a popular Tyneside anthem. The Shipley is also the Northeast’s leading gallery of craft and design with one of the best collections outside London, including ceramics (the Henry Rothschild collection comprises work by all major British 20th century makers and studios), wood, metal, glass, textiles and furniture. 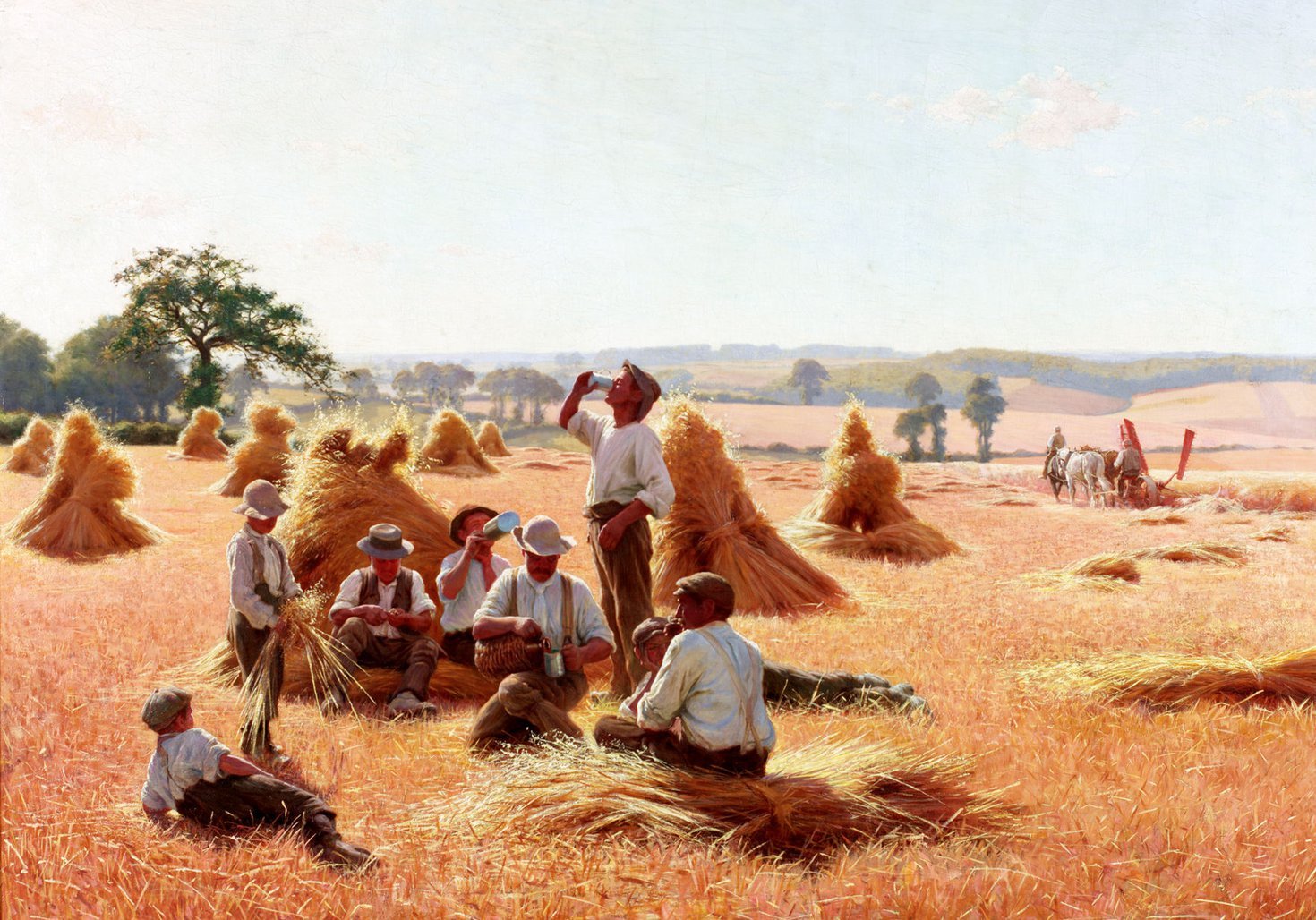 In the main room Treasures from the Shipley Art Gallery features one of the best groups of 16th and 17th century Dutch and Flemish paintings in Britain along with Victorian paintings, sculpture and decorative art, while four side rooms are dedicated to still life, design and an eclectic range of artefacts from nearby Saltwell Towers, a 19th century Gothic mansion and Joseph Shipley’s former home, which fell into disrepair in the 1960s. 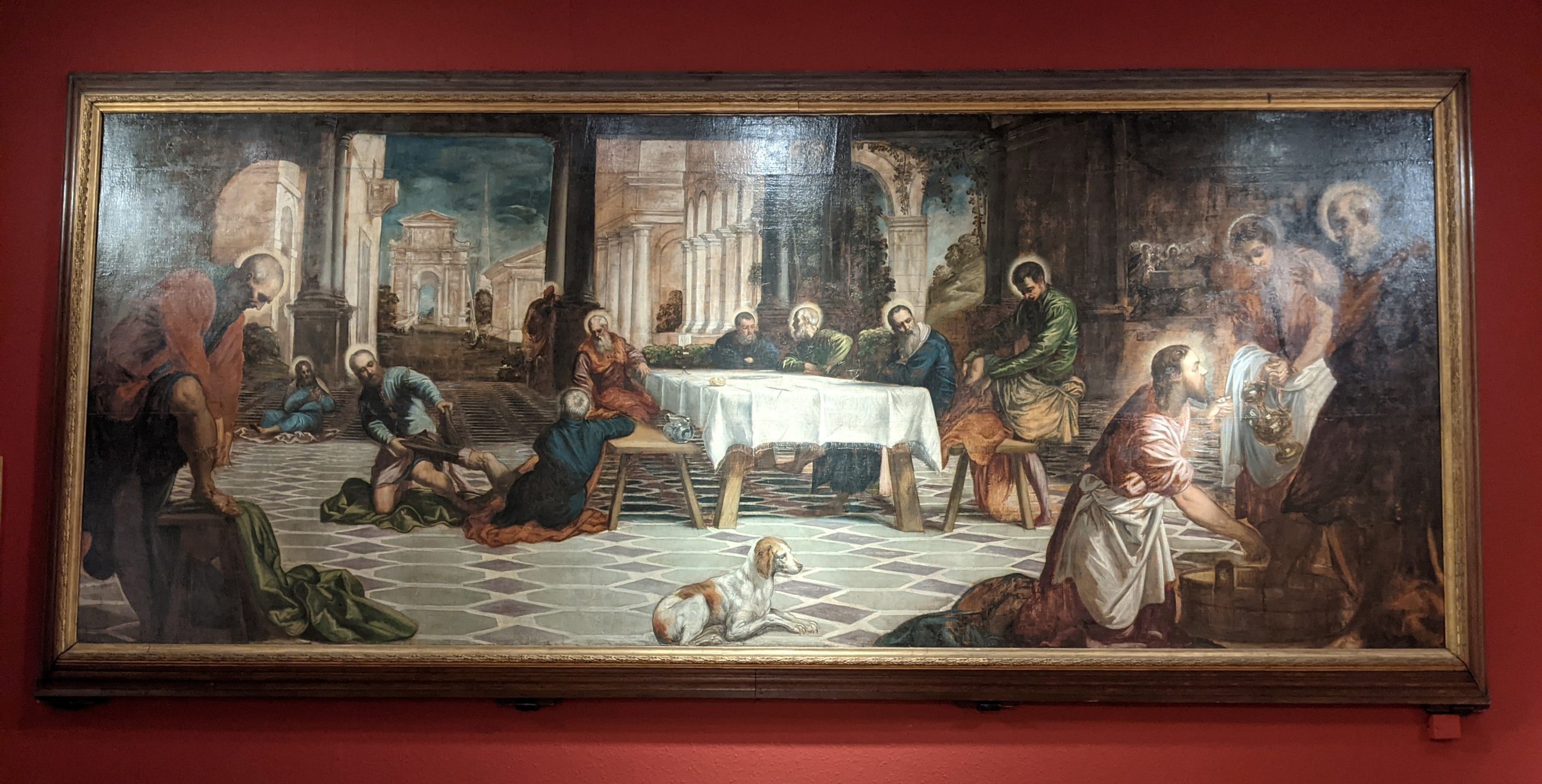 The main room is dominated by Tintoretto’s Christ washing the disciples’ feet (c. 1548), one of a pair the artist painted for the church of San Marcuola in Venice. (The second painting, The Last Supper, remains in the church.) A ‘laterale’ designed to flank the main altar opposite its counterpart, the painting passed through a succession of owners before being purchased for the Laing Art Gallery in 1986 then brought to the Shipley.

Back in Newcastle, a short distance from the Newcastle University campus Gallagher & Turner is a contemporary art gallery which hosts a changing programme of exhibitions by emerging international and local artists as well as famous names such as David Hockney, Francis Bacon, Barbara Rae, Antony Gormley and Elizabeth Blackadder.

Located in a block of listed buildings near Central Station, Newcastle Arts Centre is the largest art supplies store in the north of England. It also has two galleries showing changing exhibitions. The front shop has a great selection of local art, craft and gifts and a huge range of art greeting cards. The adjacent Jazz Cafe hosts regular jams.

Brightening up the otherwise rather drab-looking Eldon Garden shopping centre, the Northeast Art Collective is an Aladdin’s Cave of art and craft from the region. A labyrinth of ten interconnected display rooms (“Keep going left!”, advises an assistant) showcases work by over 100 artists and makers, many with no formal training or previous connection to the art world. You will find nothing esoteric here and nothing which requires explanation. What you see is what you get. 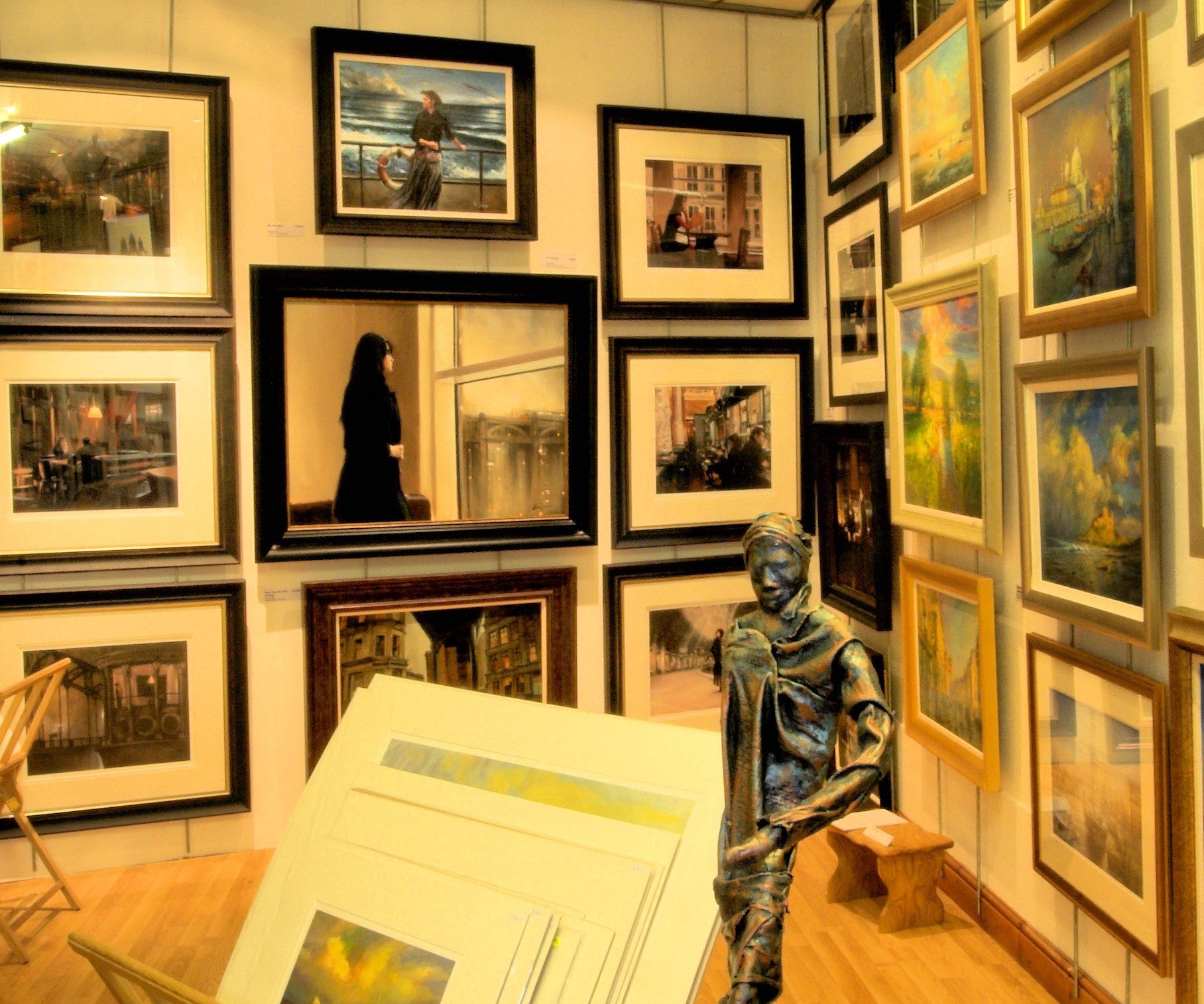 Up an alleyway off the street of the same name, the long-standing Side Gallery champions documentary photography from the northeast of England and around the world through themed exhibitions, usually accompanied by talks. It also sells a range of photography books, posters, postcards, prints and DVDs. 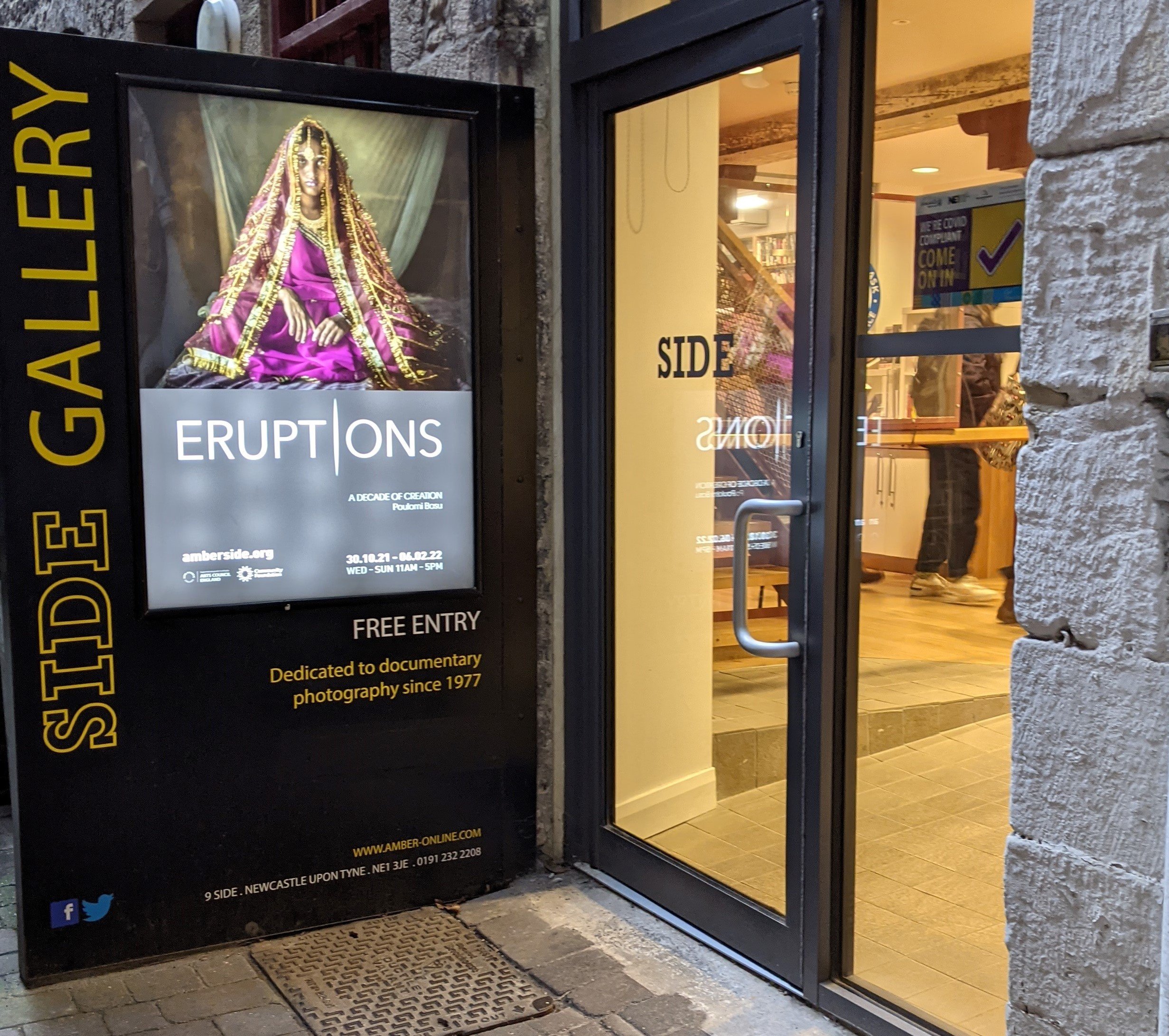 In a beautifully restored redbrick building just off St James’ Boulevard, the Workplace Foundation is a stark, minimalist, white-walled space which shows emerging and commercially under-represented contemporary artists with a focus on the north of England.

On the east side of the city is the Ouseburn Valley, once the cradle of the industrial revolution on Tyneside and now Newcastle’s creative quarter.

Housed in a tastefully converted former Victorian warehouse, the Biscuit Factory is the UK’s largest independent art, craft and design gallery. Spread over two floors, its spacious exhibition areas display a range of contemporary fine art, sculpture, original prints, jewellery and design-led homewares by over 200 artists. The fine art is beautifully presented against bare brick and white walls, while the craftwork can be viewed in display case presentations rivalling the best department stores. There is also a modern cafe with rooftop views. 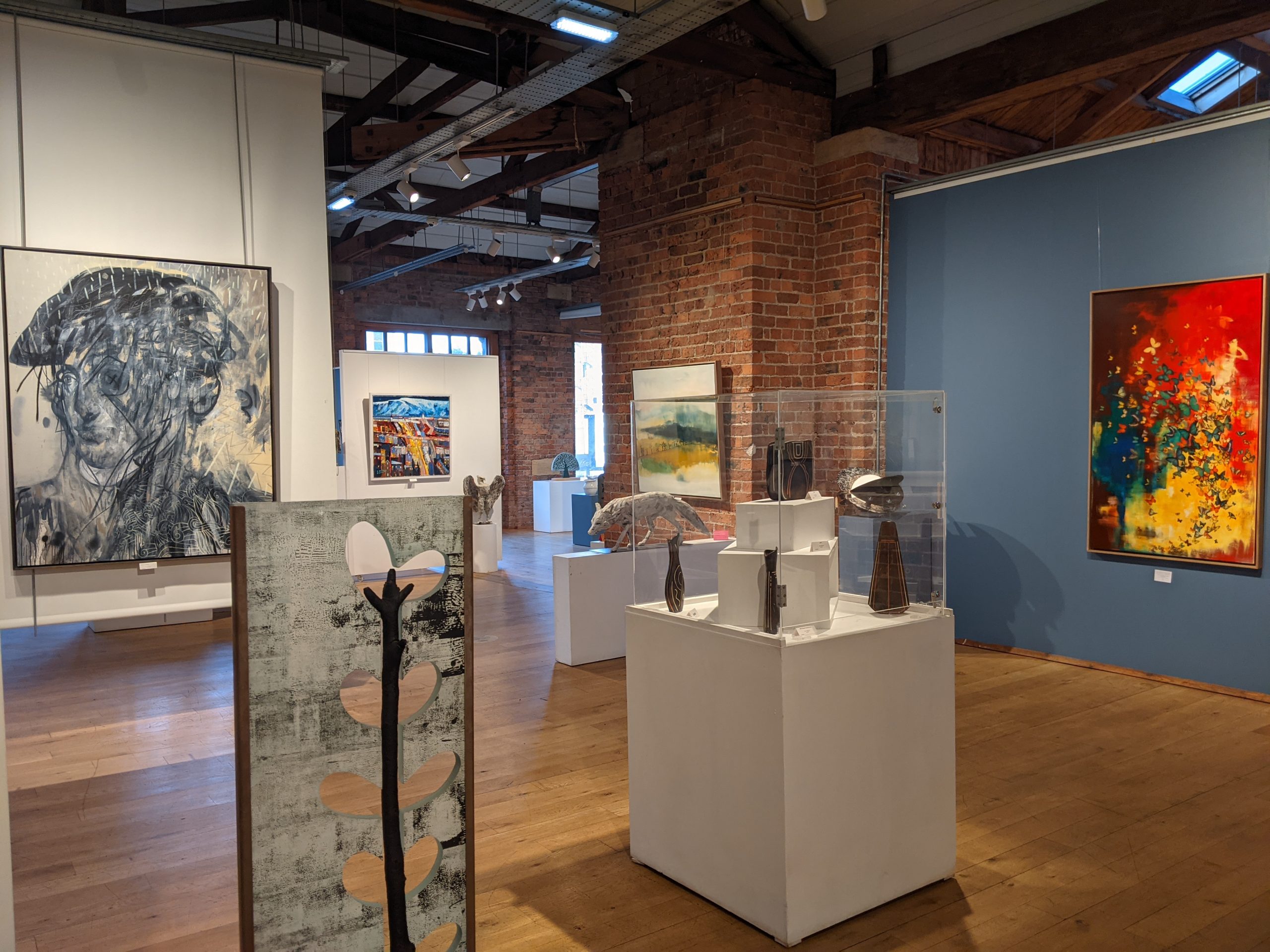 In a former brewery storage plant 36 Lime Street is the oldest and largest complex of artists’ studios and workshops in the Northeast with over 30 tenants practising a wide range of disciplines, including – deep breath – painting, printmaking, bookmaking, furniture design and manufacture, ceramics, glasswork, textiles, jewellery, sculpture and photography. The 36 Gallery on the ground floor hosts regular exhibitions by emerging artists.

Directly opposite is the Jim Edwards Studio Gallery, home to the artist best known for his stylised depictions of iconic buildings and bridges of the Northeast as well as abstract paintings inspired by man-made forms and buildings. 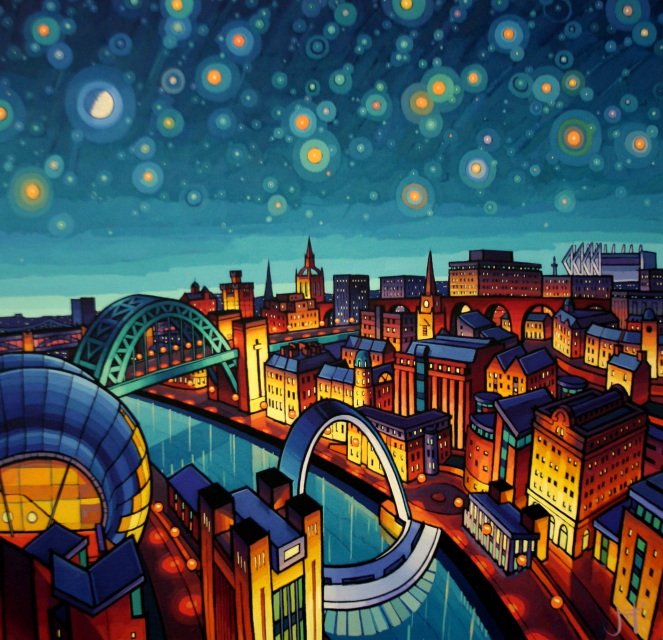 Northern Print is the leading printmaking centre in the Northeast. There is also a gallery showcasing the best in contemporary printmaking with a huge selection of prints by regional and international artists. They will be happy to show you how to tell an etching from an engraving or an artist’s proof from an aquatint. Bridget Jones, A Tumble of Cream and Pink (Northern Print)

Ouseburn is also the scene of an annual late night culture crawl in May called The Late Shows, an after-hours festival of events which also spreads into central Newcastle and across to Gateshead and sees museums, galleries, studio collectives and landmark historical buildings come together to stage exhibitions, workshops, behind the scenes tours, performances and parties.

Back in the city centre, take a stroll up Newcastle’s stylish Grey Street (named after former Prime Minister Earl Grey of the popular tea blend fame and one of the finest examples of Georgian-era architecture outside London or Bath), where there are two galleries side by side, one an outlet of one of the UK’s top gallery chains and the other dedicated to a local artist whose work is instantly recognisable for its iconic characters. 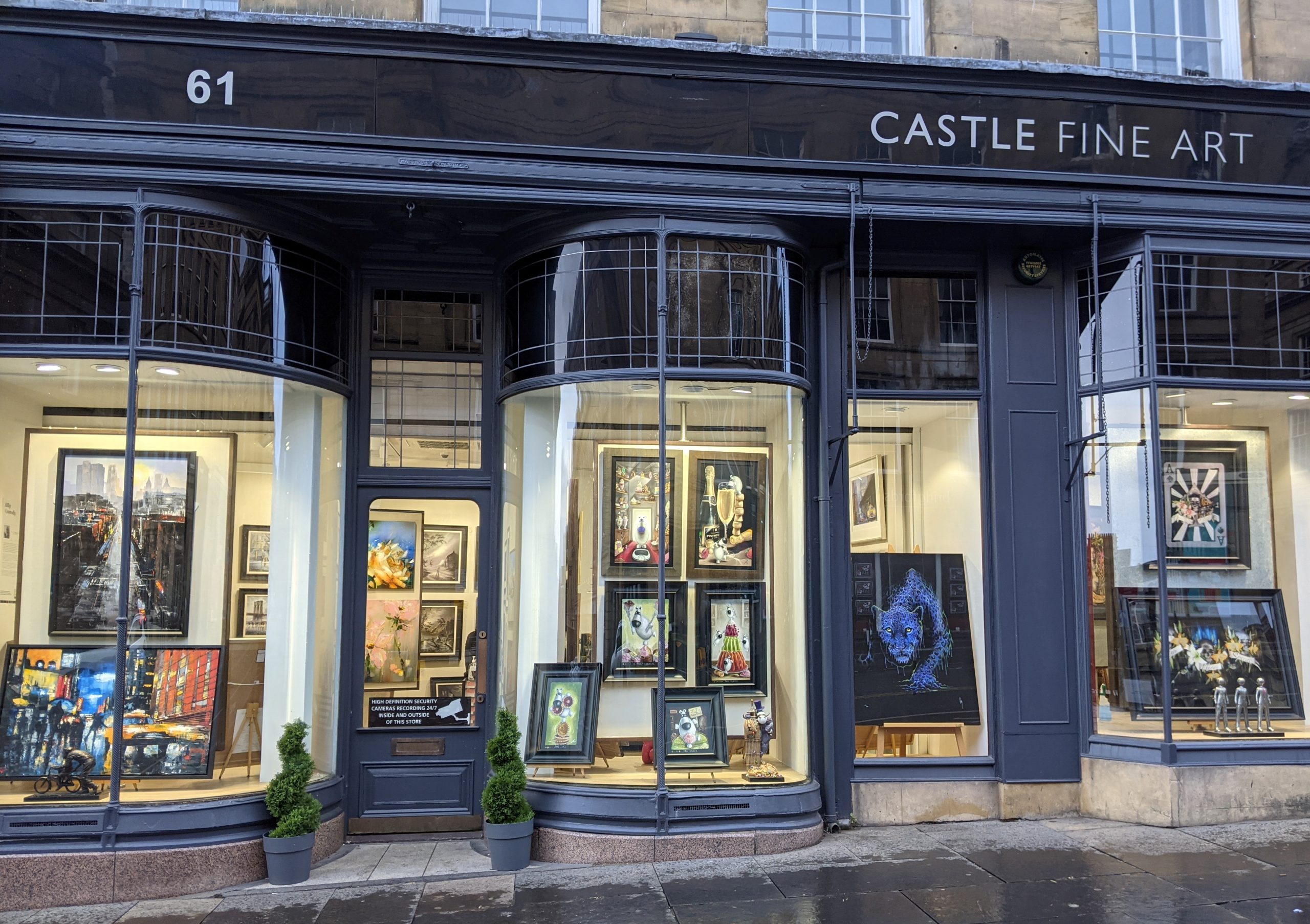 Castle Fine Art specialises in art which is often unfairly dismissed by some art-lovers for its ‘commercial’ appeal. Nevertheless these type of galleries play a key role in introducing high street shoppers to the art world who might not otherwise appreciate the benefits of investing in art. Next door is Alexander Millar Fine Art, owned by the Newcastle-based artist whose working class “gadgie” character has made him one of the UK’s best-selling artist. 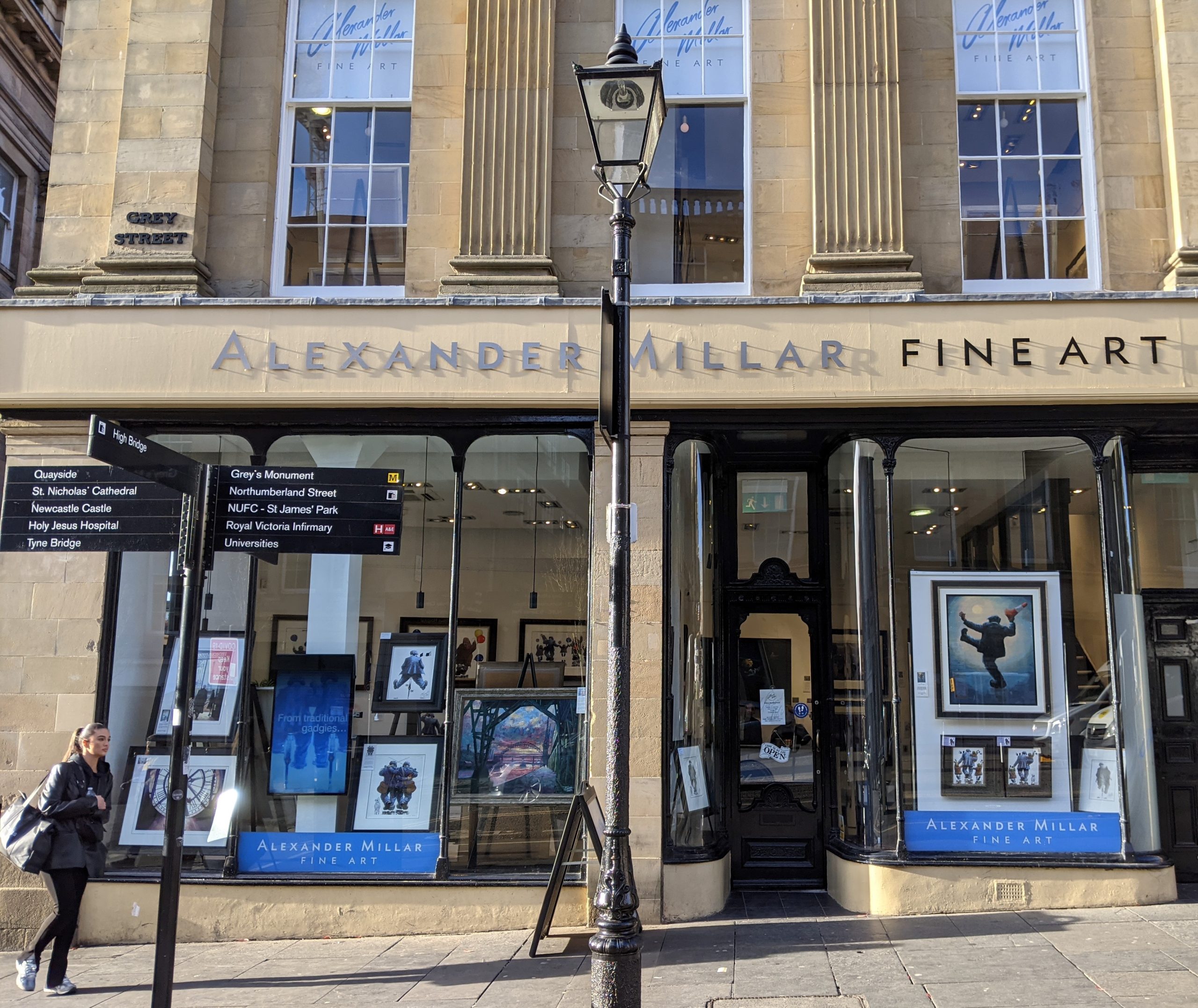