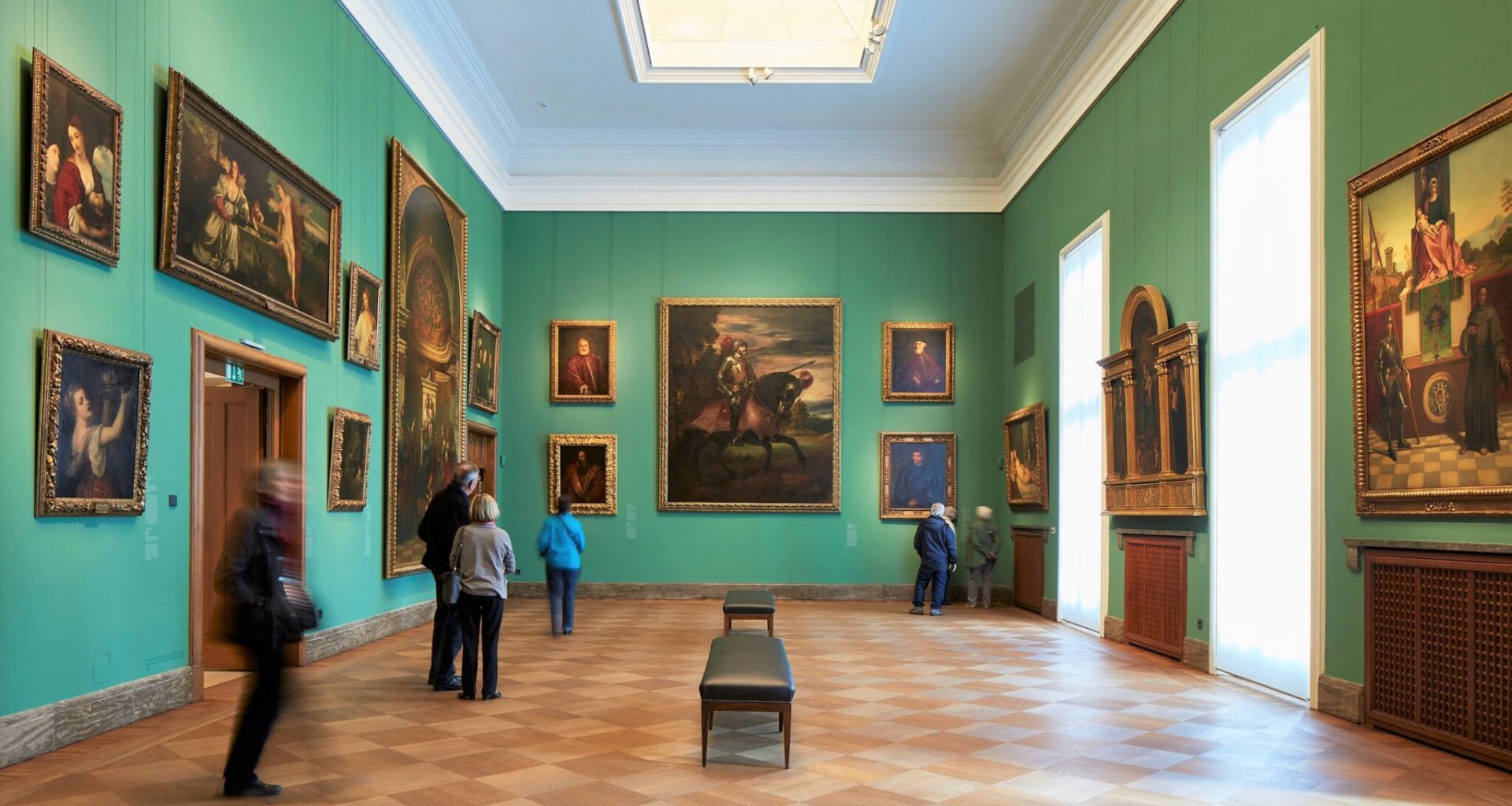 The top ten art museums in the Bavarian capital

Germany’s third largest city after Berlin and Hamburg, Munich has been voted the one most Germans would prefer to live in. Most of the top art museums are clustered together in the ‘Kunstareal’ (Art Area), a two square kilometre district around the Königsplatz (King’s Square) – a concentration perhaps unique in the world. Between them they cover more or less the entire history of art to the present day.

The Alte Pinakothek (Old Picture Gallery, from the Greek ‘pinakothiki’, a painted board or tablet) traces the development of art from the Middle Ages, through the Renaissance and Baroque to the end of the Rococo period around the mid-19th century. Housed in a massive, neo-Classical building, the collection comprises works from the stellar eras of German, Flemish, Dutch, French, Italian and Spanish painting.

“Rediscover the 19th Century” is the mantra at the Neue Pinakothek (New Picture Gallery), which holds masterpieces by major pioneers of modern art such as Max Liebermann, Edouard Manet, Claude Monet, Vincent van Gogh and Paul Cézanne. The original gallery was founded by King Ludwig I as Europe’s first public museum dedicated to contemporary art. Destroyed in WWII, it was replaced by the current building in 1981. There are regular themed exhibitions. Please note: While the museum is closed for renovation, a selection of its 19th century works is on display in the Alte Pinakothek and the Schack Collection. See below.

Sometimes referred to by locals as “die dritte” (the third), the Pinakothek der Moderne (Modern Picture Gallery) was created to consolidate into one collection works from municipal galleries throughout the city, effectively making it four museums under one roof. The four corners of the Le Corbusier-like building are connected by a central, domed rotunda, with each corner dedicated to a special collection: art, architecture, design and works on paper. Along with a permanent exhibition of works by over a hundred goldsmiths on loan from the Danner Jewellery Collection, it is one of the world’s largest museums for modern and contemporary art and craft.

Many major 20th century painters, sculptors, photographers, installation artists and film- and video-makers are represented, while there are works on paper by Dürer, Rembrandt, Michaelangelo and Da Vinci. Architecture is represented by drawings, blueprints, photographs, models and computer animations.

Opened in in 2009, the Museum Brandhorst is Munich’s newest art museum (not counting the Lenbachhaus extension – see below). It is also the most spectacular, with its striking, multi-coloured facade composed of 36,000 vertical ceramic louvres in two dozen different coloured glazes. At any one time around 200 works from the permanent collection of 700 are on display. These include about 100 by Andy Warhol and 60 by Cy Twombly (the largest collection outside the US). One of the rooms, an irregular octagon, was built especially to house Twombly’s Lepanto cycle, a painting in twelve parts.

Other modern artists include Joseph Beuys, Georg Baselitz, Gerhard Richter, Bruce Nauman, Jean-Michel Basquiat and Damien Hirst. There are also works on paper by Kasimir Malevich, Kurt Schwitters, Joan Miro and others. The annual acquisition budget of €2 million is the largest of any other collection in Munich.

Funded by the leading German portraitist Franz von Lehnbach (1836-1904), the City Gallery in the Lenbachhaus (or simply the Lenbachhaus) has gained a striking, new extension to the beautiful, Tuscan-style villa Lenbach built for himself and his collection. The new facade gleams gold and the spacious entrance hall is topped by a huge glass sculpture hanging down like a rainbow-hued stalactite.

The centrepiece of the collection is the world’s largest Blue Rider collection, donated to the museum on her 80th birthday by Gabriele Münter, one of the founders of the movement along with her partner Wassily Kandinsky, Franz Marc, Paul Klee, August Macke and others. The acquisition of the collection in 1957 turned the Lenbachhaus into a world class museum virtually overnight.

Other highlights include 19th and 20th century Munich paintings, sculptures by Josef Beuys, Romantic German landscape painting, nature studies by the French Barbizon school and the 800,000-piece photographic collection of the Munich City Museum. Further acquisitions have expanded the museum’s holdings of art after 1945, such as Andy Warhol’s Lenin and Neuschwanstein, the latter bathed in surreal colours reflecting the eccentricity of that castle’s founder, King Ludwig II.

Completing a trio of museums on the same busy intersection is the Glyptothek (Sculpture Gallery, from the Greek word for ‘to carve’), which houses the State Collection of Greek and Roman Antiquities. Also commissioned by the art-loving King Ludwig I (after whom the Königsplatz is named), it was part of his vision for Munich as a “German Athens”.

Munich’s oldest public museum, the Glypothek was originally built completely of marble and was decorated with colourful frescoes and stuccos. Bombed during WWII, it was reconstructed using red brick painted with a light plaster. The many busts include the Emperors Augustus, Nero and Caligula, while statues include an enormous Apollo from a Roman villa in Tuscany. Other works include Roman sarcophagus reliefs, mosaic floors and a bronze head of a youth forged around the time of the birth of Christ.

Across the city in a neat row along the Prinzregentenstrasse are three more museums to make up Munich’s top ten for art, craft and design. No art museum is more symbolic of post-war change in Germany than the Haus der Kunst (House of Art). A colonnaded slab of Third Reich architecture, it was built by the National Socialists to show the best of “German art”, as opposed to the modernist art which they termed “degenerate” and banned for being un-German, Jewish or Communist, Originally called the Haus der Deutschen Kunst (House of German Art), the entire Nazi leadership attended its opening in 1937.

The well camouflaged building was virtually unscathed in WWII and after undergoing a number of post-war uses, including as an American officers’ club, exhibitions resumed with The Blue Rider, featuring formerly ostracised works. Thus the museum was effectively denazified. Major exhibitions followed dedicated to artists and designers such as Frank Lloyd Wright, Ernst Ludwig Kirchner, Le Corbusier, Oskar Kokoschka, Vincent van Gogh, Wassily Kandinsky and Paul Klee. A milestone was a Picasso restrospective in 1955, when the iconic, anti-fascist Guernica was shown in Germany for the first time.

With some 100,000 objects, the Bavarian National Museum has one of Europe’s largest collections of applied and decorative arts. Housed in a magnificent, Italianate building, the bulk pf its collections were once owned by the Wittelsbach family, a Bavarian royal dynasty. Produced by some of Europe’s finest craftsmen, the artefacts date from late antiquity to Art Nouveau and are displayed in over forty rooms, all stylistically attuned to the periods represented by the objects in them.

A short distance further along the Prinzregentenstrasse, the Schack Collection specialises in 19th century German painting. There are around 180 works, primarily historical scenes and landscapes, the latter notably of Mediterranean countries known to the collection’s founder, Count Adolf Friedrich von Schack (1815-1954) through his extensive travels. The collection has remained unchanged since his death. In addition to works by German artists, many depicting legends and fairytales familiar to most people growing up in Germany, the Count collected copies of 16th and 17th century masterpieces, mainly by Venetian artists such as Titian, Tintoretto and Veronese. 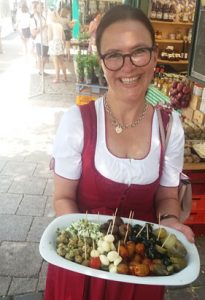 For 200 years the Viktualenmarkt has been presenting farm-fresh fruits and vegetables, piles of freshly baked bread and up to 300 varieties of cheese from specialist stalls. There are guided tasting tours. 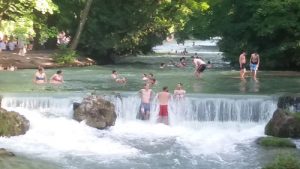 The Englischer Garten is the world’s biggest public park. Opened in 1789 on former royal hunting grounds and completely man-made, it has a boating lake, a Chinese pagoda, a Japanese tea house, a Greek-style temple, a fast-flowing river popular with surfers and an officially designated naturist area. (The Germans are enthusiastic dis-robers.) 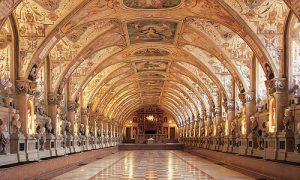 Seat of the rulers who governed Bavaria in the 17th century and beyond, the Residence Museum is the largest city palace in Germany with 10 courtyards and 130 rooms. 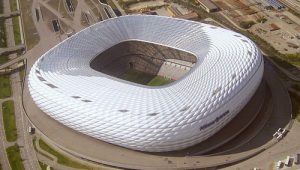 Featuring Europe’s steepest seating, the 69,000-capacity Allianz-Arena has a silver, diamond-patterned ‘skin’ which changes colour from red and white (FC Bayern) to blue and white (TSV 1860 Munich), depending on which home town team is playing in the shared venue. 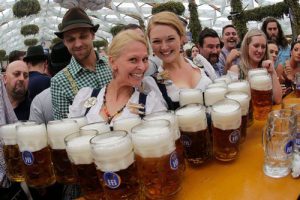 Oktoberfest is the world’s biggest beer festival. Originating from the mass wedding celebration which Crown Prince Ludwig held in 1810 for the people of Munich, around six million visitors now flock to the lollapalooza of beer. Named after Ludwig’s bride, the main site, Theresienwiese (Theresa’s Meadow) can accommodate 100,000 partiers at a time. Oktoberfest is not such good news for the 460,000 chickens, 80-odd oxen and enough pigs to produce nearly half a million sausages which are consumed over the 16 days – all washed down with 30 per cent of the whole year’s production from six Munich breweries.