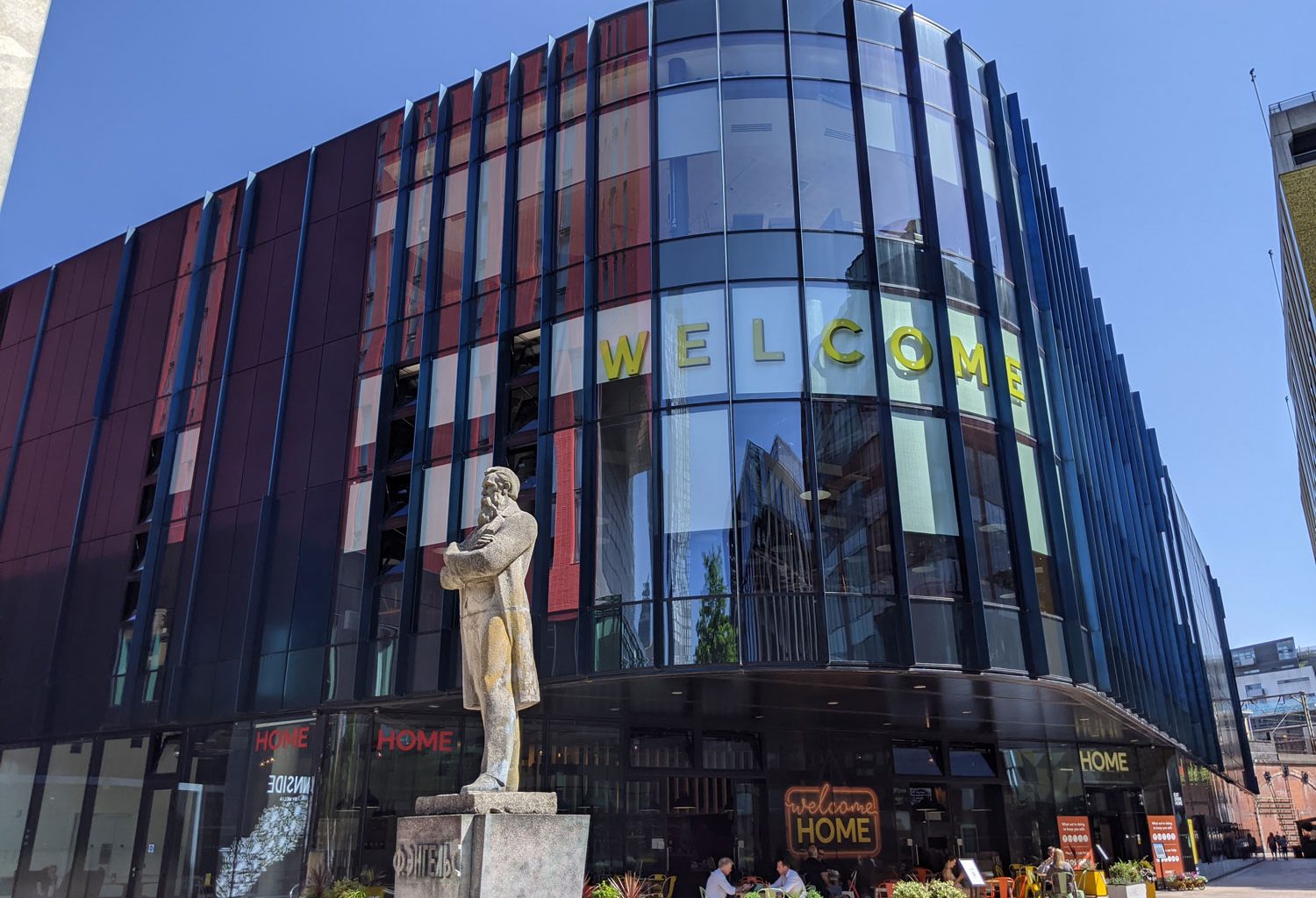 “Madchester” is one the UK’s most creative cities

The world’s first industrial city, a pioneer in transport by canal and rail, early advocate of free trade and women’s suffrage, home to Britain’s longest running soap opera (that’s Coronation Street for the initiated), renowned worldwide for music from the Hollies to the Happy Mondays, enticer of the BBC to its purpose-built MediaCityUK in Salford Quays (once the third busiest port in Britain) and home to one of Britain’s most iconic artists – Manchester has it all.

Variously described as ‘the original useful museum’, a ‘think tank for the city’ and an ‘art school for everybody’, Manchester Art Gallery was founded in 1823 by artists and merchants as an educational establishment of and for the people. A refuge from the toxic effects of life in an industrial city, its main aim was to promote art as a means of achieving social change and to inspire creativity in all aspects of life. Today the gallery cares for a public collection of over 46,000 objects spanning six centuries of fine art, craft, design, costume and more – all collectively owned by the people of Manchester. 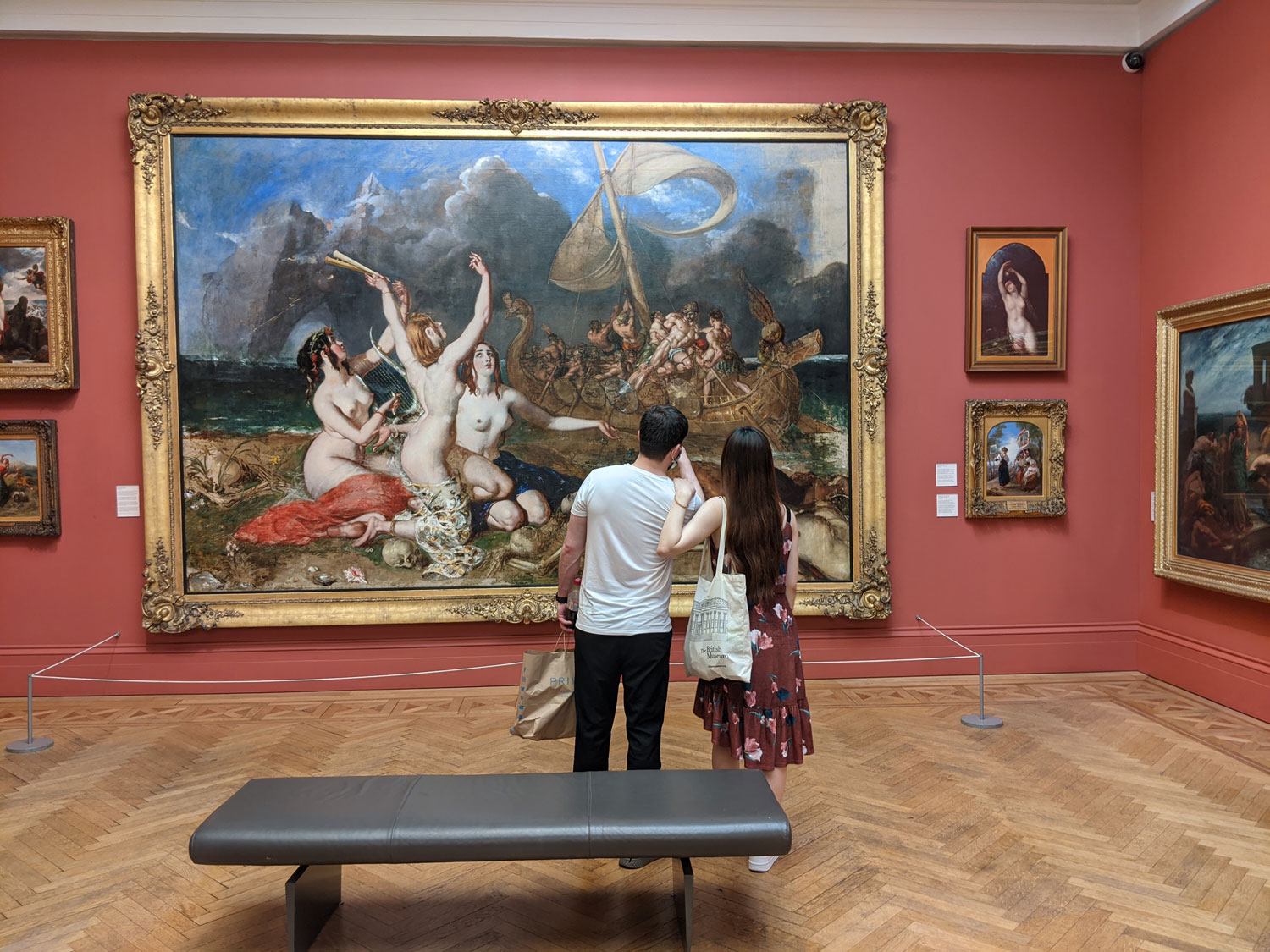 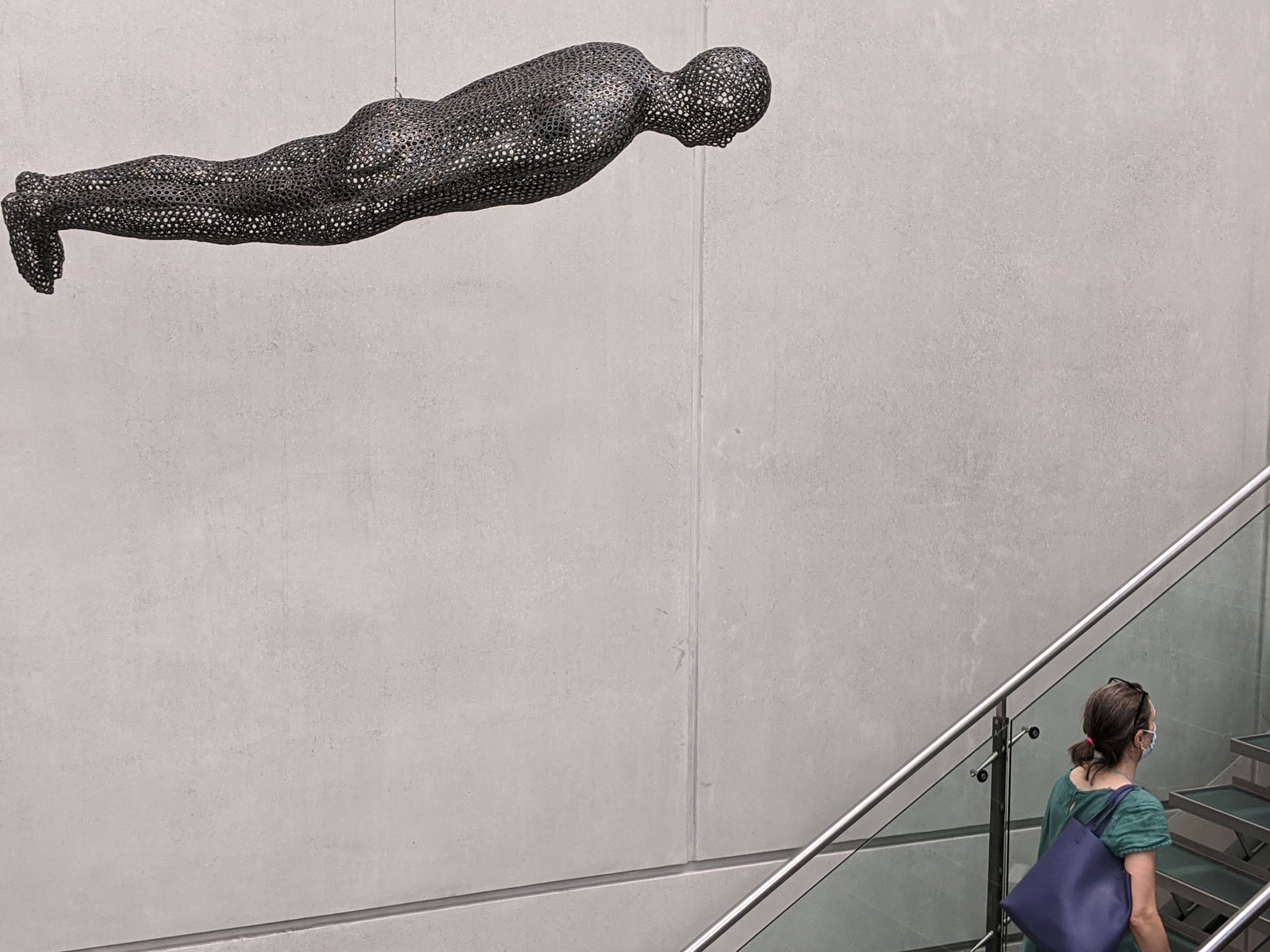 Centrepiece of the redeveloped Salford Quays is the Lowry Arts Centre, named after the city’s most famous artist, Laurence Stephen Lowry (L.S.) Lowry (1887-1976). Designed by architect Michael Wilford, who was also responsible for the British Embassy in Berlin, the futuristic-looking, Gehryesque complex houses the The Lowry Collection, representing all periods of the artist’s career. Over 400 paintings and drawings are shown alongside an extensive archive of photographs, press cuttings and exhibition catalogues. 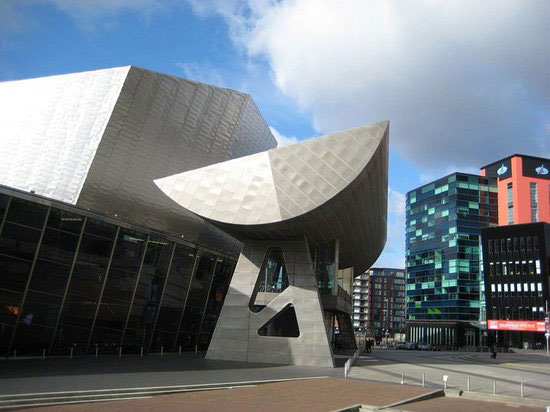 Most famous for his so-called ‘matchstick men’, Lowry’s talents far exceeded his figures rendered in shorthand. He also created evocative seascapes, rural views and imagined portraits. For example, Seated Male Nude (pencil on paper, c.1914) is a fine example of life drawing, Self-Portrait (oil on plywood, 1925) seems to look right through the viewer (although he never attempted another realistic likeness), Head of a Man (oil on canvas, 1938) has echoes of German Expressionism and the Seascape (oil on canvas, 1952) is Rothko-like in its abstractness. However, it is his scenes of working and social life in industrial surroundings that most visitors come to see, and the collection does not disappoint, with iconic works such as Coming from the Mill, Going to Work and Market Scene, Northern Town. 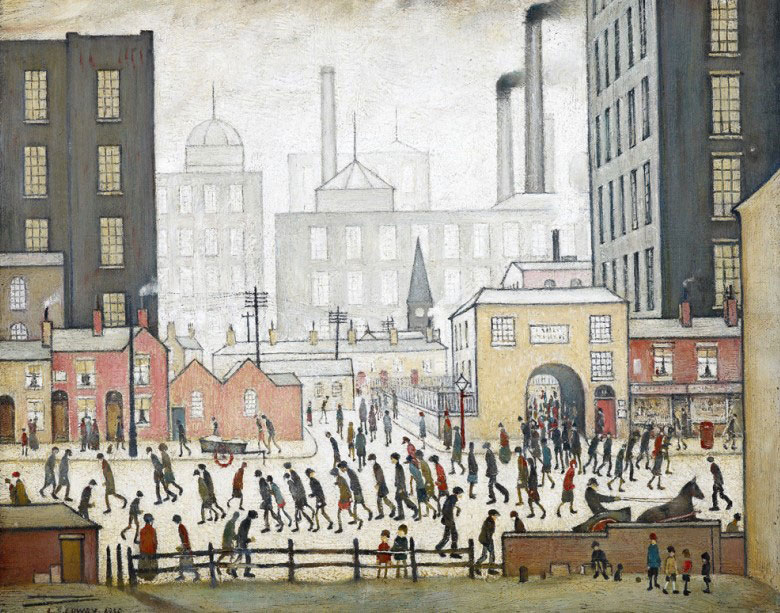 Part of the University of Manchester, The Whitworth was founded by the industrialist Sir Joseph Whitworth for ‘the perpetual gratification of the people of Manchester’ – a similarly social ethos to the Manchester Art Gallery. The 60,000-piece collection includes Old Master drawings, an important group of Pre-Raphaelite works by Millais, Rossetti, Holman Hunt and Burne-Jones, several works by William Blake and 18 Turner watercolours. Impressionism and Post-Impressionism are represented by the likes of Degas, Van Gogh, Pissarro and Gauguin, European Modernism by major names such as Picasso, Maholy-Nagy and Paul Klee and British art of the early and mid-20th century by Sickert, Moore, Hepworth and others. 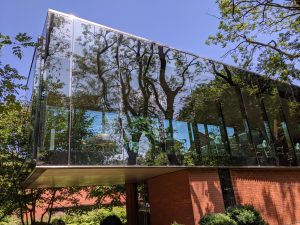 Many of the great names of contemporary art are also featured, such as Gustav Metzger, Cornelia Parker, Rachel Whiteread, Tracey Emin, Frank Auerbach and Wolfgang Tillmans, and the gallery continues to actively collect art in pursuit of new artists with the potential to shape contemporary art.

Outside, The Whitworth has blended its original 1889 features with two modern, glass extensions which jut out into the adjacent Whitworth Park, bringing art and nature together. A stroll through the park reveals several outstanding sculptures, including: Bending Figure by Raqs Media Collective of New Delhi, which includes quotes from George Orwell’s essay Shooting an Elephant, evoking the pomp and circumstance of British India; Cyprien Gaillard’s The Obelisk, made from crushed brick and concrete from the nearly Hulme Crescents, a misguided experiment in multi-level social housing which was eventually demolished; and Gustav Metzger’s Flailing Trees, comprising 21 upended willow trees embedded in concrete as a protest at human aggression against nature. 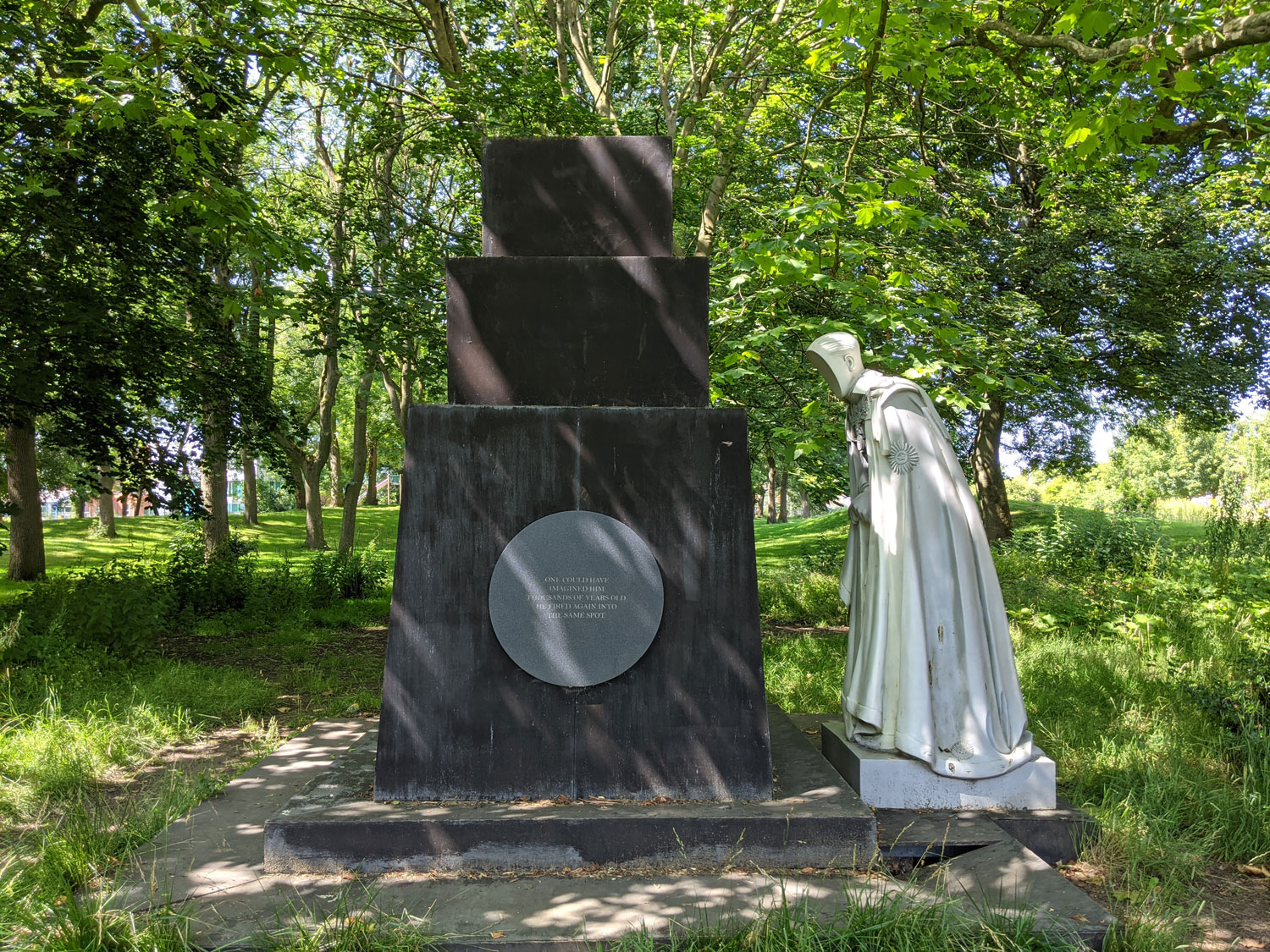 In the trendy Northern Quarter, a creative community full of independent shops, cafes and restaurants and ‘decorated’ with street art, the Manchester Craft and Design Centre occupies a former Victorian indoor fish and poultry market. You can still see two of the original fishmongers’ booths. Today it is home to over 20 contemporary craft studios spread over two floors, where makers sell a wide variety of hand-crafted work, including jewellery, ceramics, leather goods, glasswork, lighting, furniture and homewares. 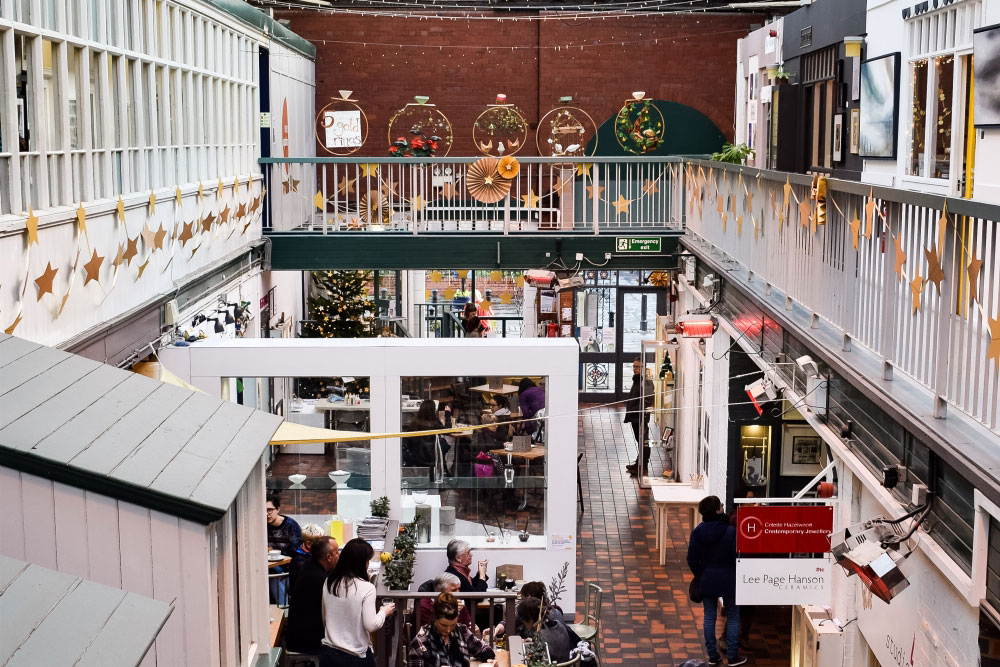 A short stroll past the Deansgate Locks and along a stretch of the Rochdale Canal Tow Path in the Castlefield area evokes the city’s industrial past, with warehouses, raised railway tracks on huge brick viaducts and iron bridges forming a spectacular legacy of the Industrial Revolution. A canal-side walk has the added bonus of leading to Saul Hay Fine Art in its picturesque Railway Cottage home. The gallery was established to showcase contemporary artists in northwest England who were not represented in commercial galleries and a changing selection of their work is always on display. 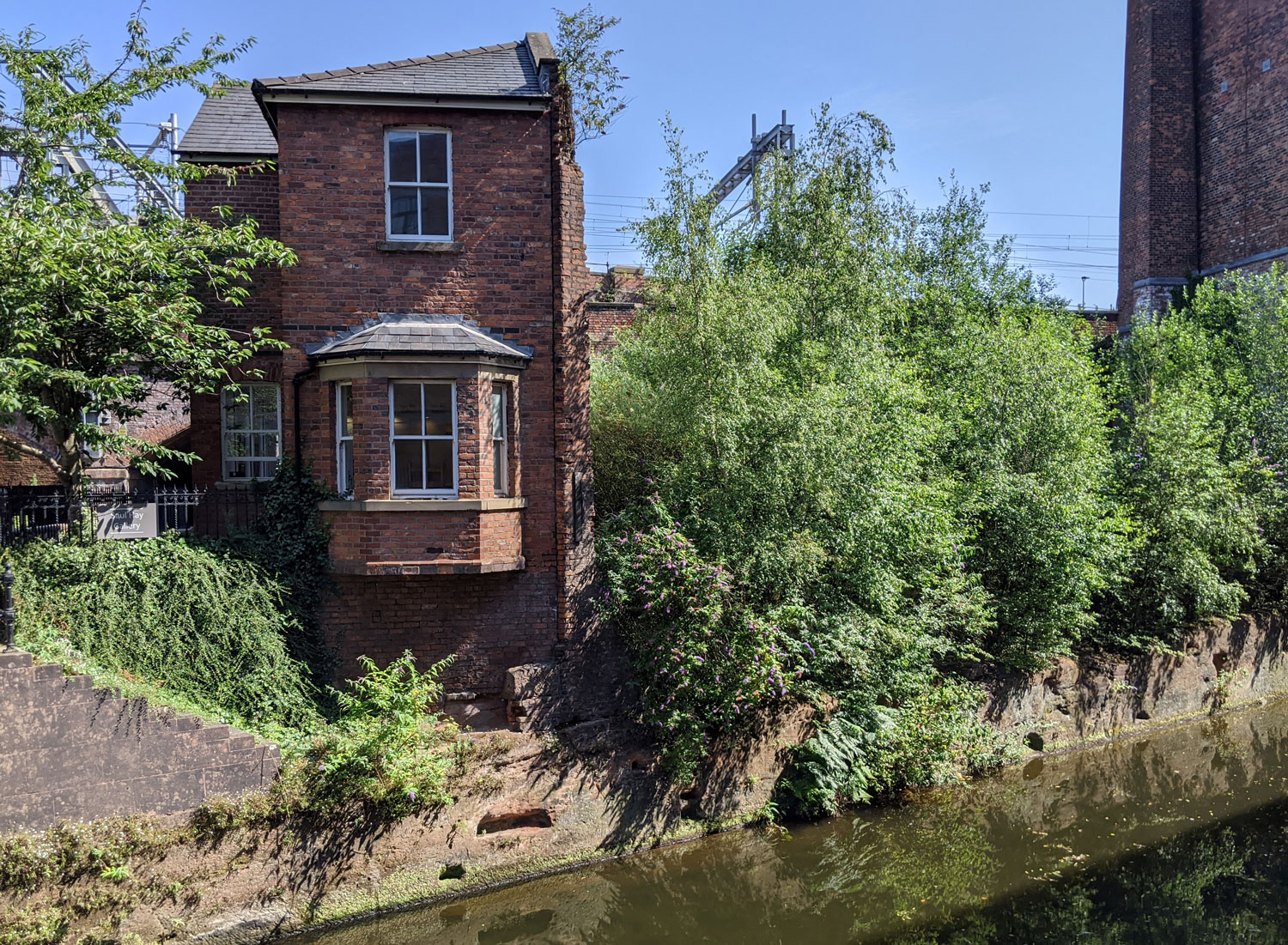 In Tony Wilson Place, named after the founder of Factory Records and owner of the famed Hacienda nightclub, Home is a cultural hub containing two theatres, a multi-screen cinema complex, a bookshop, a cafe-restaurant and an art gallery which commissions new work by established and emerging artists. Film-maker and Manchester native Danny Boyle (Trainspotting, The Beach, 28 Days Later) is one of the centre’s patrons. 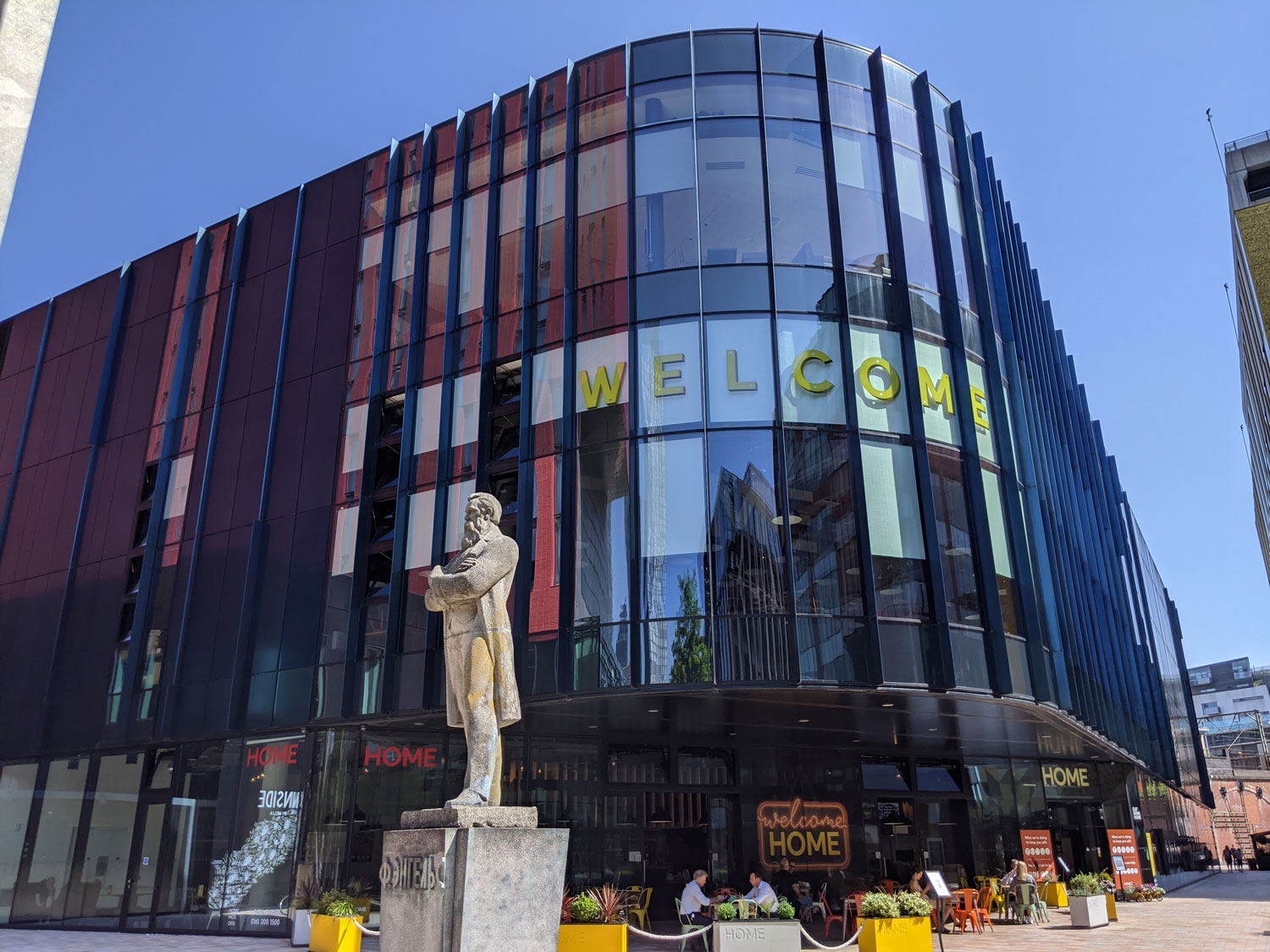 Located in what was once the centre of Manchester’s cotton business (handling 80 per cent of the world’s trade and earning the city its nickname “Cottonopolis”), the Royal Exchange Theatre has been staging performances in the magnificent building since 1973. Frederick Sargent’s Interior of the Manchester Royal Exchange (1877) in the Manchester Art Gallery shows it in its original, trader-packed splendour.

Marble-clad and naturally lit through glass domes, the massive space is filled by what appears to be a floating spacecraft. It is in fact a steel theatre in the round (the largest in the country) suspended above floor level. Opened by Sir Laurence Olivier, it has seen performances by the likes of Vanessa Redgrave, Tom Courtenay, Albert Finney and Julie Walters along with its resident company. 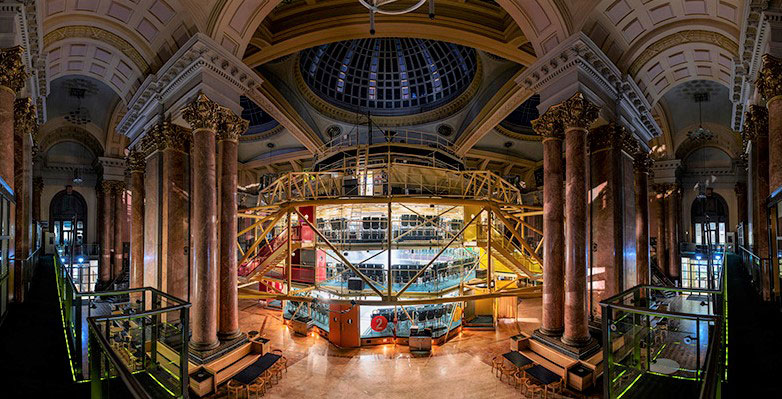 Perhaps rivalled only by Dublin’s Trinity College Library, the John Rylands Library is one of Manchester’s premier buildings. The late-Victorian, neo-Gothic building with Arts and Crafts elements was one of the first in Manchester to be lit by electricity. With parapets resembling turrets and an imposing, castle-like gatehouse, it dominates the surrounding streetscape.

Inside the entrance hall is an Art Nouveau delight, with soaring stone vaulting, a sweeping staircase and a high, circular balcony, while the jaw-dropping historic reading room is softly lit with stained glass windows featuring religious, artistic and intellectual figures. The collection includes medieval illuminated manuscripts and examples of early European printing, including a Gutenberg bible and the second largest collection of printing by William Caxton. 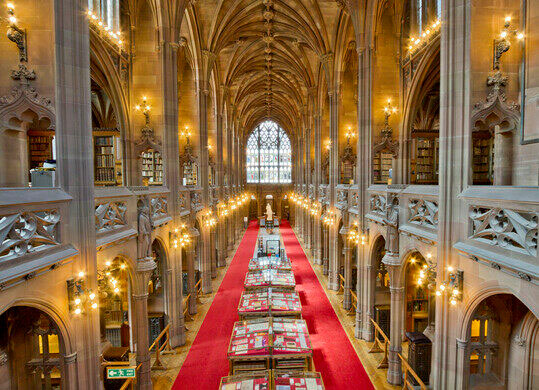 The historic reading room of the John Rylands Library

Elsewhere you might admire the facade of the late, lamented Free Trade Hall, where Bob Dylan was jeered for ‘going electric’ and where a host of bands from progressive to punk played (the building itself is now gone, replaced by a Radisson Blu hotel) or Polish artist Robert Sobocinski’s statue of his countryman, the composer Chopin, marking a performance he gave in Manchester in 1848.