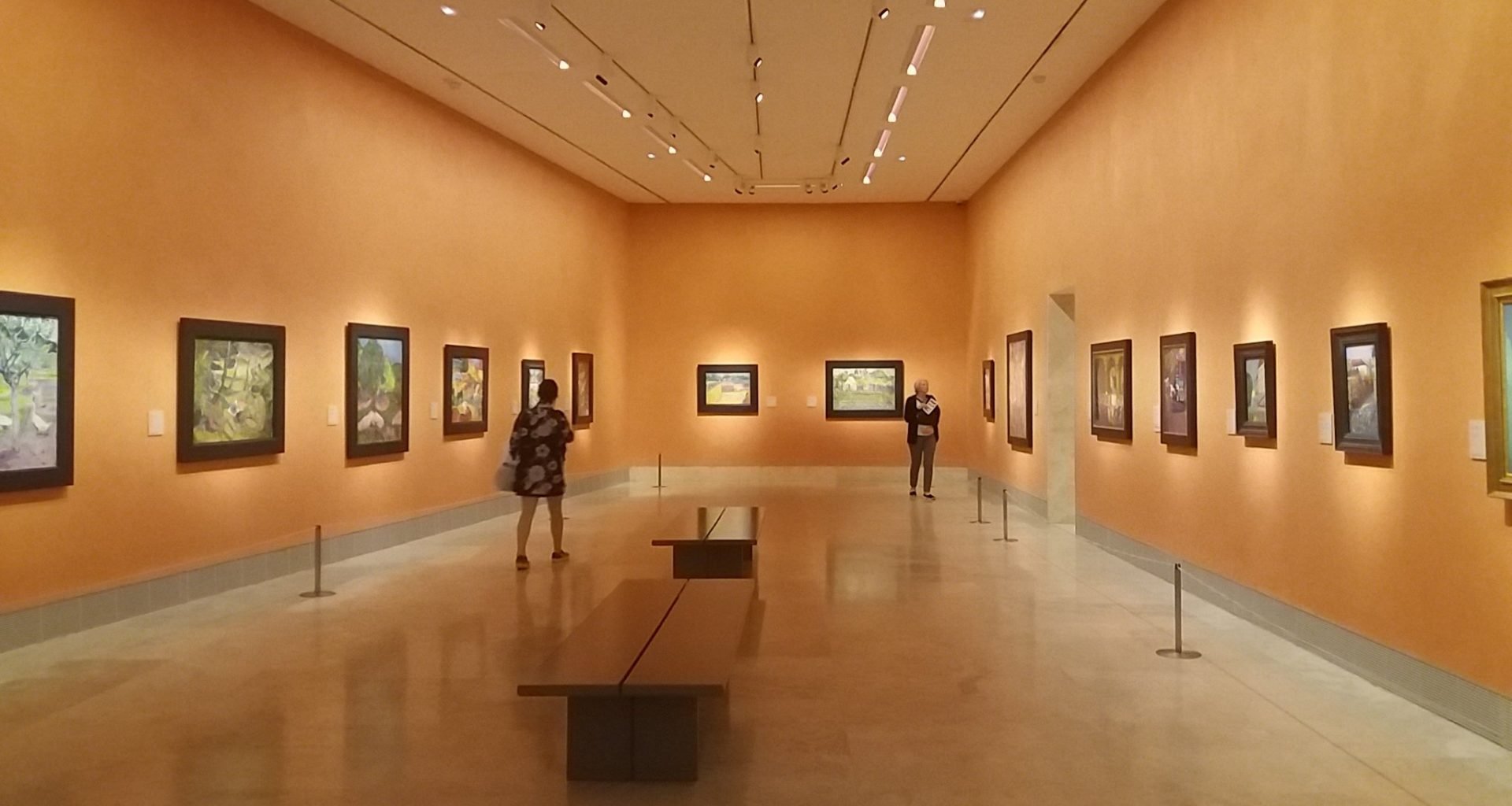 The Paseo del Arte is an art walk par excellence.

A stroll along one of Madrid’s most elegant boulevards links three world class art museums in a ‘golden triangle’ barely ten minutes from one another and all in beautiful buildings adapted for cultural purposes. Along with a couple of relative newcomers, they form perhaps Europe’s leading art thoroughfare, while a visit to the nearby Retiro Park offers even more. Along the way you will encounter virtually every major artist from medieval times to the present day and some of the most famous works in the history of art. 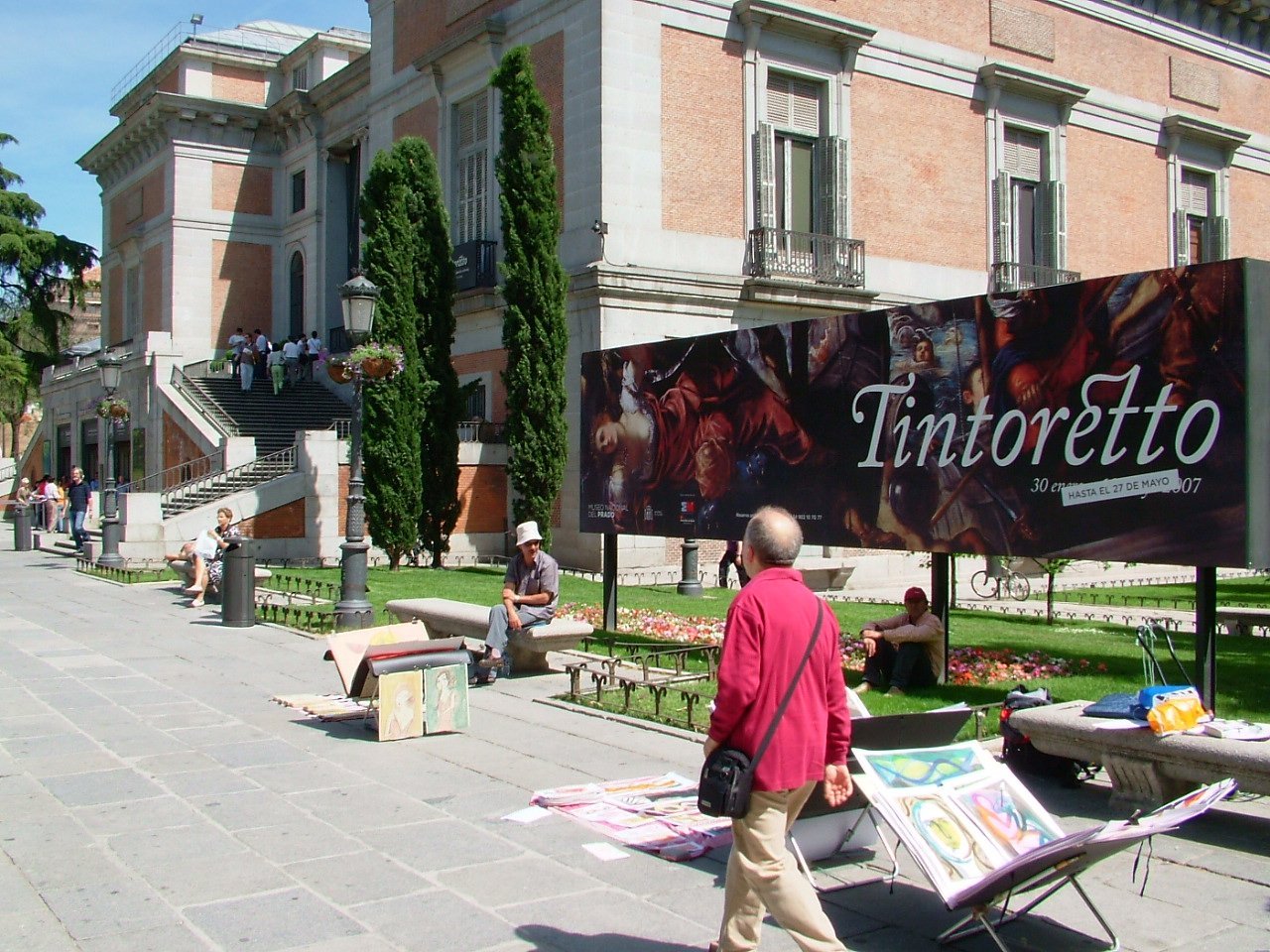 The Museo Nacional del Prado is Madrid’s best known attraction. Housed in a gigantic, neo-classical building opened in 1819 to display the royal art collection, the Prado is one of the world’s first public art museums. An ambitious expansion programme in recent years has resulted in a remodelled annex and a controversial, cube-shaped building to host temporary exhibitions.

The core of the collection reflects royal tastes and political alliances from the 15th to the 17th centuries. Works by court painters Velazquez and Goya are well represented, while political ties with France, Italy and Flanders have resulted in works by the likes of Poussin, Titian, Botticelli, Artemisia Gentileschi, Caravaggio, Rafael, Rubens, Breughel, Dürer and Van Dyck. The Prado also has the world’s greatest Hieronymous Bosch collection, including his surreal triptych Garden of Earthly Delights, which King Felipe II had hanging on his bedroom wall. 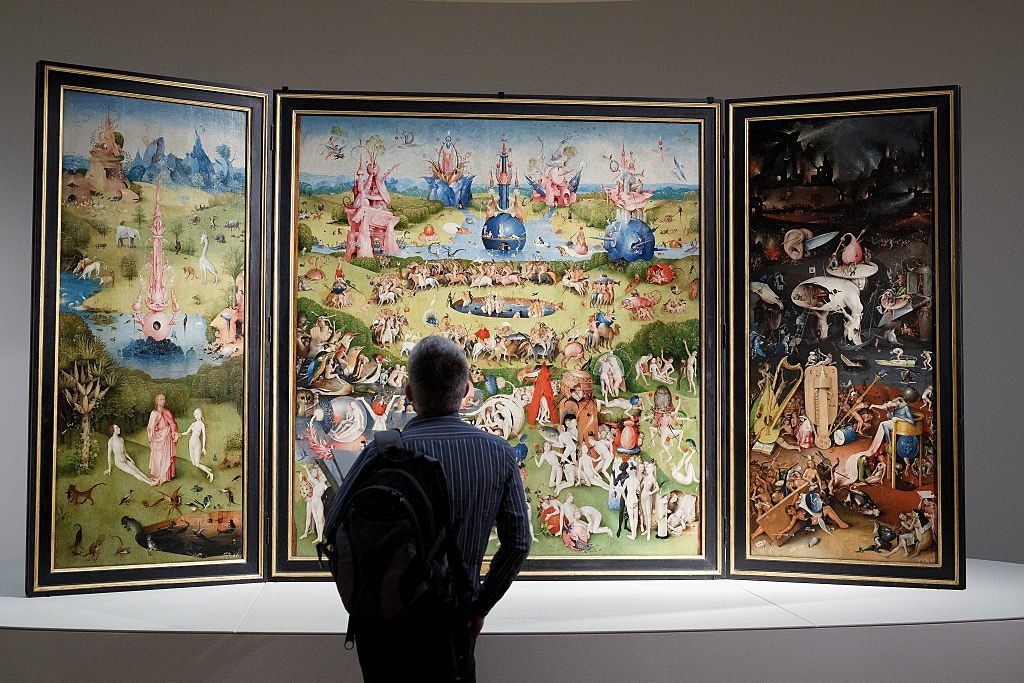 Among the Prado’s greatest attractions are the Velazquez rooms, where pride of place goes to Las Meninas (The Hand Maidens), often described as the greatest painting in the world for its complex interplay of perspectives. Velazquez depicts himself at work on the painting, while the king and queen are reflected in a mirror at the far end of the room, but in whose place every viewer also stands, observed by Velazquez, the little Infanta Margarita and other figures. 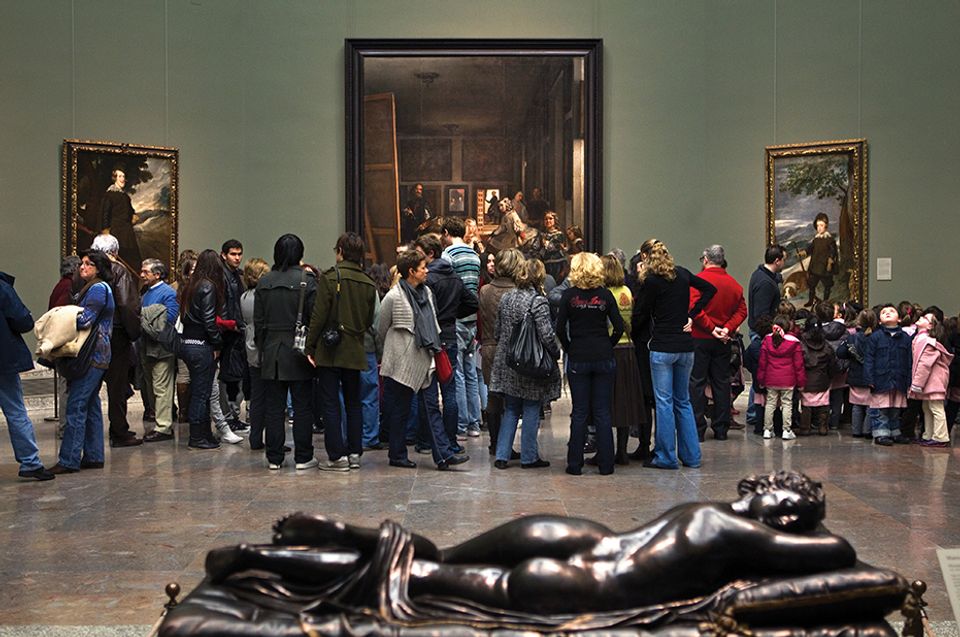 There are more rooms dedicated to Goya than to any one artist. The works cover every stage of his career, including his images of war, such as The Third of May, 1808, depicting executions carried out by French troops in Madrid. A free map will guide you to the ‘must sees’, while the museum’s website offers some suggested itineraries which will enable you to see the main masterpieces, depending on how much time you have.

Further up the the Paseo del Arte, the Thyssen-Bornemisza Museum, or simply the Thyssen, holds the private collection of the late Baron Hans-Heinrich Thyssen-Bornemisza, widely considered among the most important in the world. Housed in a former ducal palace, it comprises some 800 works arranged chronologically to tell the story of eight centuries of Western art, from Duccio di Buoninsegna’s 13th century Christ and the Samaritan Woman to Roy Lichtenstein’s 1963 Woman in Bath. Thanks to a major refurb involving terra cotta pink walls, marble floors and skylights, the works can be enjoyed in perfect conditions. 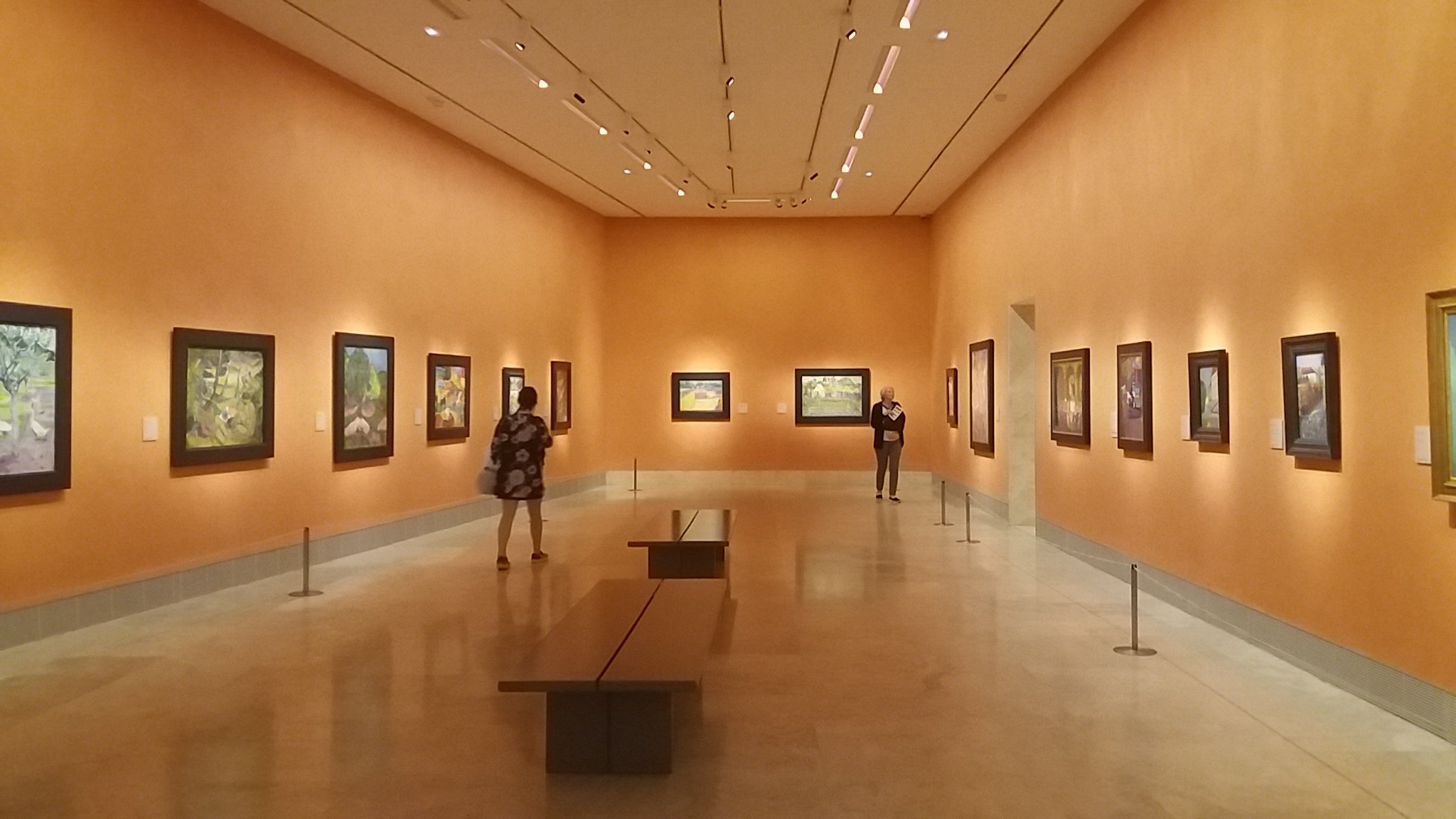 Completing the ‘golden triangle’ is the Museo Nacional Centro de Arte Reina Sofia in a great slab of a building flanked by exterior glass lift shafts. The Reina Sofia’s great jewel is unquestionably Guernica, Picasso’s large painting denouncing war and fascism, which commemorates the destruction in 1937 of the Basque town of Guernica by German bombers flying in support of Franco’s forces in the Spanish Civil War.

Picasso refused to allow the painting to be exhibited in Spain under the Franco regime, and it was only in 1981 that it was finally brought to Spain from the Museum of Modern Art in New York. It has hung in the Reina Sofía since 1992. (The artist had intended the painting to be housed in the Prado and his family opposed the change of location. The Basque Country also failed in its attempt to have it exhibited in the Guggenheim Museum in Bilbao.) 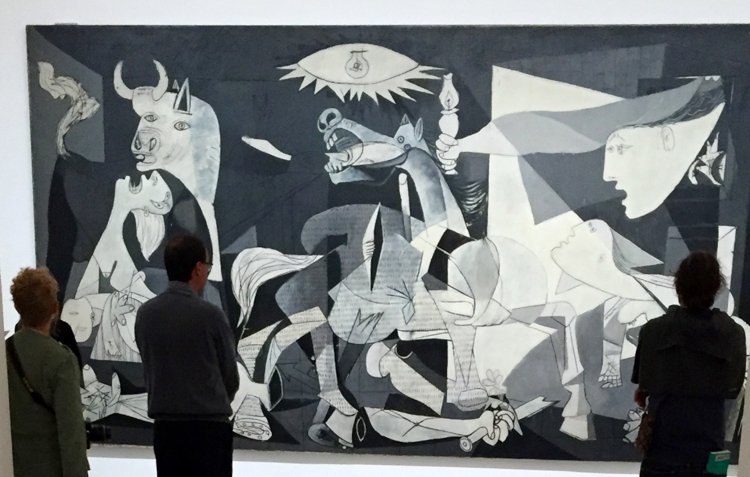 The Reina Sofia’s permanent, 20,000-piece collection contains works by practically all the major Spanish artists of the 20th century. Dali and Miro have rooms to themselves, while others include Gris, Gonzalez, Tapies, Ponce de Leon and Saura. There are also works by non-Spanish artists such as André Breton, Man Ray, Henry Moore, Dan Flavin, Anish Kapoor, Bruce Nauman, Tony Cragg, Ellsworth Kelly and Julian Schnabel.

The museum is built around a peaceful inner courtyard with trees, giant shrubs and an unmistakable, girder-like sculpture by Alexander Calder. The Reina Sofia also curates exhibitions in the Palacio de Cristal and the Palacio de Velazquez in the Retiro park.

A more recent addition to the Paseo del Arte is the CaixaForum Madrid, one of several venues in Spain funded by the cultural arm of the Catalan bank. The spectacular premises are the result of the renovation of the former Mediodia electric power station by the Swiss architects Herzog & De Meuron (Konzerthaus Munich, London’s Royal College of Art extension, Neue Nationalgalerie Berlin,etc.). One of the city’s new icons, the building seems to levitate off the street, while the vertical garden toys with the senses.

Covering over 2,000 square metres, CaixaForum encompasses exhibition halls, an auditorium, various multi-purpose conference rooms, a cafe, a shop/bookstore and a restaurant. As well as exhibitions of ancient, modern and contemporary art, the building hosts music and poetry festivals and other events.

Also on the Paseo del Arte is the Fundacion MAPFRE, where a former 19th century palace houses the Recoletos Exhibition Hall, presenting shows on the origins of modern art spread over three floors. Next door the Barbara Braganza Exhibition Hall is one of the few spaces in Madrid dedicated solely to photography.

A short walk over from the Paseo del Arte is the Parque del Retiro, a 300-acre public park where Madrileños come to play, relax or take a boat onto the lake. Here you will also find two annexes of the Reina Sofia.

The glass and wrought iron Palacio de Cristal is a luminous space under a soaring roof ideal for viewing large scale installations and sculpture, while the Palacio de Velasquez is a spacious brick and tile building which hosts regular exhibitions of contemporary art.