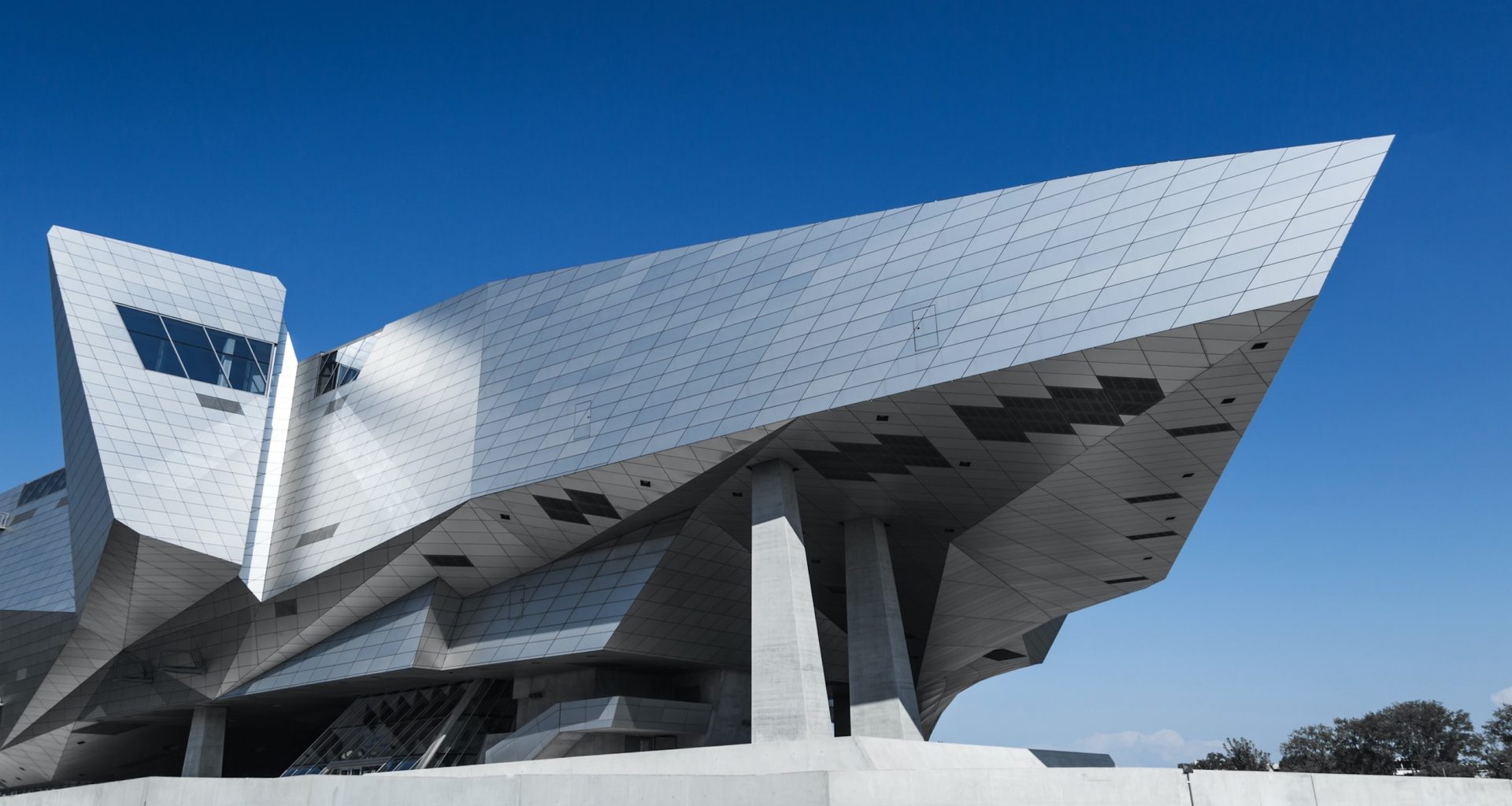 The Orange Cube is a design showroom and office building at the confluence of the Rhone and Saone rivers.

France’s third largest city, Lyon prides itself on its cultural accomplishments and attractions. From its early days as a Roman settlement, it went on to become a leading printing centre in the Renaissance, an industrial and economic powerhouse through its silk and textile trade, a technical innovator thanks to the Lumiere brothers’ invention of cinematography and, later, colour photographic processing and today hosts France’s leading art event, the Lyon Biennale. 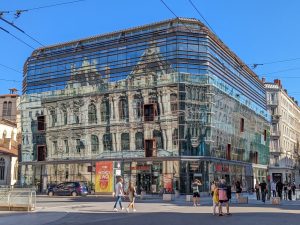 The city’s oldest and most picturesque district, ‘Vieux Lyon’ (Old Lyon) has one of the largest collections of Renaissance architecture in Europe. Largely pedestrianised, it was the first site in France to be protected under the Malraux law, introduced by the then culture minister and novelist Andre Malraux, which granted tax-deductible status to the restoration of classified property.

A unique feature of Vieux Lyon are its ‘traboules’ (from the Latin ‘trans-mabulare’, meaning to pass through) – passageways and courtyards linking streets through buildings, much to the delight of visitors. The area is topped by the ‘Tour metallique’. It resembles a mini-Eiffel Tower, which it predates by three years.

At the top end of the Presque’ile (peninsula) district fringed by the Rhone and Saone rivers (they meet at the lower end), the Museum of Fine Arts occupies the vast 17th century Royal Abbey of Our Ladies of Saint-Pierre. Possibly the finest provincial museum in France, it stands on the Place des Terreaux, site of the Bartholdi fountain (designed by the same man behind the the Statue of Liberty) and previously the site of the guillotine during the bloody French Revolution. To this day some locals refuse to cross the square in the memory of ancestors who were victims of the Reign of Terror. 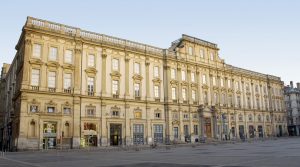 The museum’s seventy exhibition rooms house paintings, sculpture and decorative arts from antiquity to the 20th century. The impressive antiquities section, including the second largest collection of Egyptian antiquities in France after the Louvre, provides an overview of the Egyptian, Mesopotamian, Phoenician, Roman, Greek and Celtic cultures, while an equally splendid sculpture display includes works by Rodin, Bourdelle, Wouters, Maillol and others. 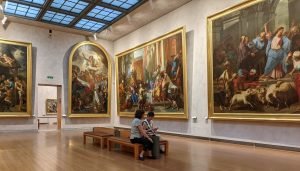 Pride of place goes to the largest collection of Impressionist works in France after the Musee d’Orsay in Paris, including works by Degas, Renoir, Monet, Sisley, Pissarro, Cezanne and Morisot. Other French masters include Moreau, Manet, Dufy, Boudin, Poussin, Ingres, Gauguin, Matisse and Daubigny, while their international counterparts range from Veronese, Rubens and Rembrandt to Chagall, Picasso and Bacon. The permanent displays are augmented throughout the year by themed exhibitions. A pleasant terrace cafe overlooks the central garden. 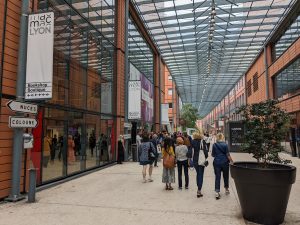 Since 1984, when the first exhibitions took place, works have been especially created by living artists. At the time of its opening, the Lyon contemporary art scene lagged behind much of the rest of Europe and the decision was made not to try to catch up by acquiring existing works, but instead to develop its own collection. This now covers a variety of media, from painting, video, sculpture and sound works to photography, drawing, film and digital art. There are also a number of large scale installations. 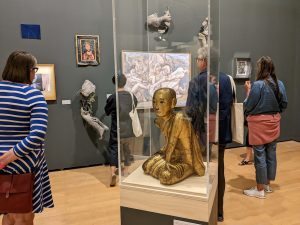 Housed in a splendid Renaissance building in Vieux Lyon, the Maison des Avocats (Lawyers House), the Cinema and Miniature Museum is one of a kind in Europe, with two unique collections assembled by the artist Dan Ohlmann: over 450 objects on the theme of traditional special effects techniques before digital film-making became widespread, such as model-making and stop motion techniques; and 120 faithfully reproduced miniature dioramas on a 1/12th scale of Lyon interiors and other familiar spaces. 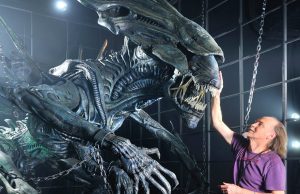 Artist Dan Ohlmann and a triceratops from Jurassic Park

Procured from some of the biggest European and American film studios, the cinema section includes animatronics, masks, models, prosthetics, robots, costumes, props, memorabilia and creatures of all kinds. Clips showing ‘the making of’ include films such as Vertigo, Ben Hur, Spiderman, Mrs Doubtfire, The 5th Element, Gremlins and many more. 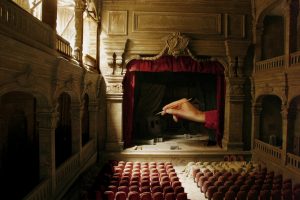 If you’ve ever been curious to see a hand from Edward Scissorhands, Julie Andrews’ umbrella from Mary Poppins, the original costume from Batman Forever or a triceratops from Jurassic Park, this is the place. There are even complete sets from the movie Perfume, which were transferred from the Bavaria Studios in Munch, where the film was made, and reassembled by the original set builder’s team. 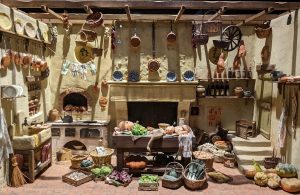 The incredibly detailed miniatures include dinosaur skeletons in an imaginary natural history museum, an artist’s studio, a kitchen, a musician’s untidy flat, a metro carriage, a chapel, a grocer’s shop, an art gallery, a brasserie, a library, the Lyon opera house, a hospital ward and a prison.

In the splendidly named Monplaisir district, the Institut Lumiere, or specifically a spot in the adjoining grounds, is known to fans of film-making as the birthplace of cinema. In 1895 brothers Auguste and Louis Lumiere presented the world’s first paid public screening of short films using their new invention, the cinematographe, a three-in-one device which could record, develop and project motion pictures. 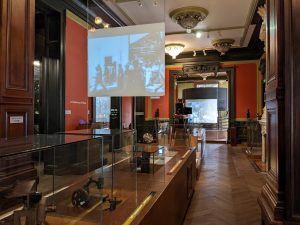 Of the ten 50-second films shown, “Workers leaving the factory” has gone down in history as the world’s first. It was shot opposite the gate to the Lyon factory their father had founded to produce photographic plates and today visitors can stand on the very spot on Rue du Premier Film (First Film Street) where the camera was set up. The factory has since been demolished and today the site is occupied by a modern annexe, the Hangar du Premier-Film, with a screening theatre and a gallery for photography exhibitions. 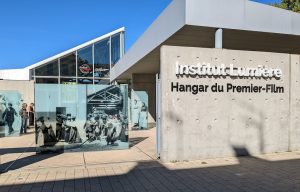 Visitors to the Hangar du Premier-Film are greeted with a still from “Workers leaving the factory”.

The family’s Art Nouveau mansion, replete with mosaics, chandeliers, marble fireplaces and even pere Antoine and his wife’s seemingly undisturbed bedroom, is now a museum dedicated to the history of film-making and photography. There is a wonderful scale model of the villa by artist Dan Ohlmann, the man behind the Cinema and Miniature Museum. 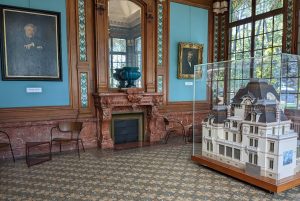 Ironically, the appropriately named brothers (‘lumiere’ is French for light) saw film as a novelty and had withdrawn from the film business by 1905, going on to develop their other major invention, the first photographic colour process.

Overlooking Lyon is the Fourviere hill (site of the original Roman settlement of Lugdunum, birthplace of the Emperor Claudius), where the Notre Dame de Fourvière Basilica is an unmissable site. Its construction followed a promise made in 1870 by the people of Lyon to their archbishop to build a basilica dedicated to the Virgin Mary if the city was spared during the Franco-Prussian war. An annual pilgrimage to the hill (known to locals as ‘la colline qui prie’, or ‘the hill that prays’) still takes place to thank the city’s patron saint, and the scene is represented on a magnificent stained glass window in the chapel dedicated to her. 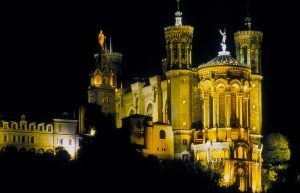 Elsewhere on the hill are the Lugdunum Museum and Roman Theatres. The ruins of the amphitheatre, which seated over 10,000 spectators, is today the scene of a performing arts festival in summer, while the Odeon, which was dedicated to music and public readings, is now a museum with collections of mosaics, bronzes, scale models and everyday objects tracing the history of Lyon from prehistoric times to the early Christian period. Both are on UNESCO’s World Heritage List. 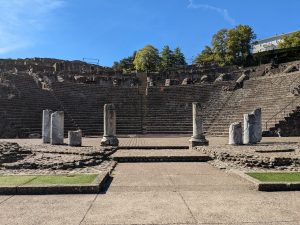 Housed in a Renaissance building which was Lyon’s first town hall, the Museum of Printing and Graphic Communication traces the history of printing from its origins to the present day, from Gutenberg’s 15th century letterpress printing process, which radically transformed the way knowledge was communicated (the museum has a leaflet of the Gutenberg Bible, the first book printed in Europe) to the digital revolution. 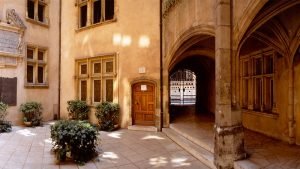 Lyon was once the European capital of printing, producing books in various languages. Several streets are named after famous printers, and during WWII the city’s printers produced many Resistance newspapers. 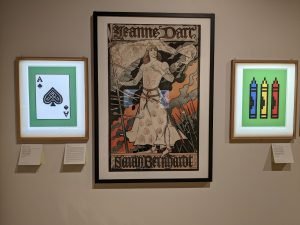 Exhibits range from one of the earliest printing presses to a 1990 Macintosh Classic computer, while displays explore the diversity of graphic design, from bus tickets and advertising posters to railway signs and record sleeves.

In the Villeurbanne suburb the Institute of Contemporary Art has one of the biggest public collections in France, with about 1,600 works by nationally and international artists such as Daniel Buren, Gerhard Richter and Jeff Wall as well as artists in the early stage of their career. Virtually all media are represented, and the building’s colourful exterior walls make it a local landmark. 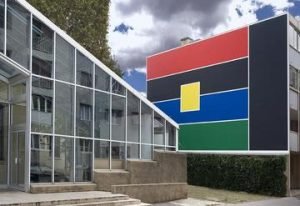 The institute has four exhibition periods a year, with a new space created for every show. (Note to foodies: The IAC is just a few minutes’ walk from a real Lyon institution – the Halles Paul Bocuse indoor market, which has been providing top notch fresh food since 1859.)

On the south edge of the Parc de la Tete d’Or, the Musee Guimet originally opened in 1879 to house the personal art collection of the industrialist and philanthropist Emile Guimet. It subsequently went through a variety of uses – a brasserie, a theatre, a skating rink and eventually the city’s Museum of Natural History – before standing empty for 15 years. Its reopening for the 2022 Lyon Biennale revealed an enormous, labyrinthine complex with a particularly awe-inspiring central hall and it now hosts a variety of temporary exhibitions. 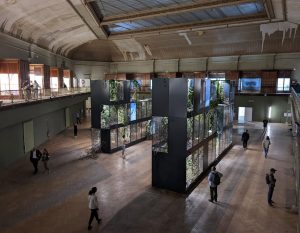