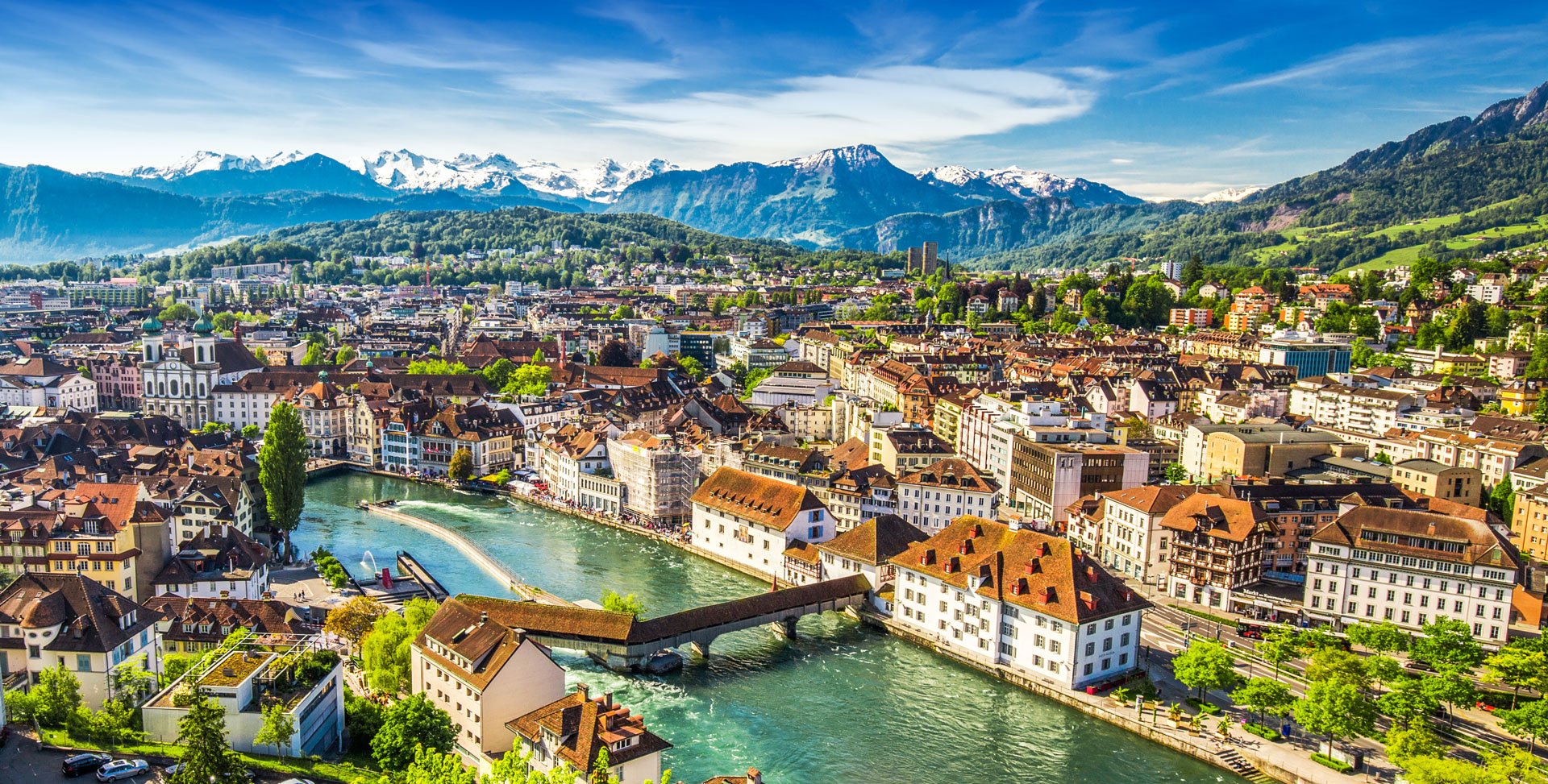 The picturesque lakeside city has attracted artists for two centuries.

Lucerne is the capital of the Swiss canton, or state, of the same name. Famous for one of the world’s leading festivals of classical music, its idyllic lakeside setting with the Alps for a backdrop makes it one of Switzerland’s most popular destinations. The picturesque, traffic-free Old Town with its almost entirely intact city wall is dotted with colourful, fresco-adorned historic houses, and you can admire the city, lake and mountains by taking the cableways up the Pilatus, Stanserhorn or Rigi mountains for breath-taking views or from a steamship cruise on Lake Lucerne.

The city’s symbol, and one of Switzerland’s most popular tourist attractions, is the 14th century Chapel Bridge, over 200 metres long and one of the oldest wooden covered footbridges in Europe. Linking the old and new town over the river Reuss, it is named after the nearby St. Peter’s Chapel.

The bridge is unique in being decorated with a number of interior paintings dating back to the 17th century. Painted in interior triangular frames by a team led by Hans Heinrich Wägmann, the leading Lucerne painter of the time, they depict scenes from the history of the Swiss Confederation and the lives of the patron saints of Lucerne, St Leger and St Maurice. 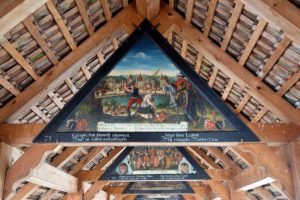 A 1993 fire which destroyed two-thirds of the bridge (it was quickly rebuilt) left only 30 of the paintings fit to be restored from almost 150 which existed before the fire. Fortunately, the paintings had been professionally photographed, making it possible to reproduce them, although a few show burnt edges.

One of the finest private art collections in the world, the Rosengart Collection includes a host of artists which reads like a Who’s Who of modern art, with two prime emphases on 20th century giants. The collection is housed in a neoclassical 1920s building, formerly the Swiss National Bank, which now contains treasure of a different kind.

The ground floor is home to the Pablo Picasso collection of 32 paintings and over 100 drawings, watercolours, sculptures, graphic designs and ceramics, while the lower ground floor accommodates a similar number of watercolours, drawings and paintings by Paul Klee from throughout his career.

The museum founders, the late art dealer Siegfried Rosengart along with his daughter Angela, were Picasso’s leading Swiss dealers, and through their friendship with him were able to procure key works from the artist’s later period. These found little critical favour at the time, but are now considered ground-breaking. 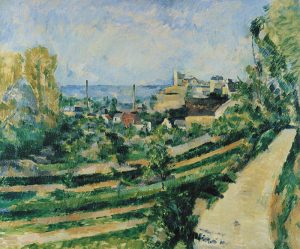 Angela Rosengart (b.1932) was able to watch Picasso at work. He painted her. Five times. She recalls: “To endure Picasso’s gaze was an incredible experience. He seemed to bore into me with his eyes, indeed to eat me up.” 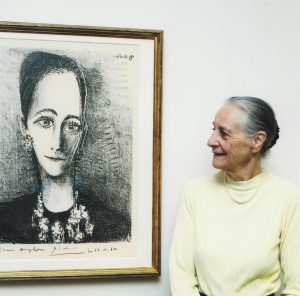 Angela Rosengart with one of Picasso’s portraits of her

There is also a room full of pictures by the American photographer David Duncan Douglas of Picasso at work or relaxing with friends. Douglas also took the famous Vietnam War photograph of children fleeing a napalm attack.

The Bourbaki Panorama must have had the impact of a Hollywood blockbuster when it opened in 1889, and today it has lost nothing of its “Wow!” factor. Invented in 1787 by the Irish artist Robert Barker, panoramas marked a milestone in the creation of illusory worlds. The first one was installed in Edinburgh with a view from the Scottish capital’s Calton Hill. The concept was seen on travelling exhibitions or in permanent installations in cities throughout Europe and the United States.

A circular viewing platform offers a sweeping, 360-degree view of a 112 x 10-metre ‘wraparound’ oil on canvas painting. It was painted by a team led by the Swiss artist Edouard Castres in Geneva, where it was previously displayed, and transferred to Lucerne, where it is shown in its original purpose-built, rotunda-shaped timber building. A young Ferdinand Hodler, who went on to become one of the greatest Swiss painters, was part of the team.

The painting depicts the evacuation to neutral Switzerland at the end of the 1870-71 Franco-Prussian War of the defeated French Army under General Charles-Denis Bourbaki. Within three days about 87,000 soldiers crossed the border, the largest ever intake of refugees into Switzerland. 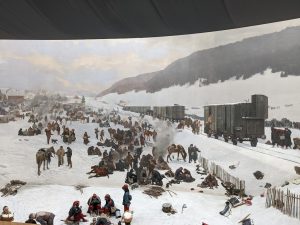 Castres himself took part in the war as a Red Cross volunteer accompanying Bourbaki’s army, and as an eyewitness to the evacuation he was able to realistically depict the misery of war. The Red Cross had been established in Switzerland 20 years earlier and the evacuation was its first major project, laying the foundations for the country’s humanitarian and neutral status.

Adding to the atmosphere are clever lighting, sound effects such as distant explosions, rattling metal and mournful singing and ‘faux terrain’ elements such as discarded items, fencing, a goods wagon on a railroad track and full-size wax figures grouped around fires for warmth, all of which seem to put viewers in the middle of the action. Panoramas declined in popularity after the Lumiere brothers invented the cinematographe, which made public screening of films possible.

The Bourbaki’s original building is now encased in a modern glass and steel structure housing shops, a cinema, a restaurant and the Kunsthalle (‘Kunst’ is German for art), which shows changing exhibitions of contemporary art in its glazed, semi-elliptical gallery.

Nearby, don’t miss the Lion Monument, a rock relief carved into a cliff face depicting a mortally wounded lion. It commemorates the Swiss Guards, serving as part of the Royal Household of France, who were massacred in 1792 during the French Revolution, when revolutionaries stormed the Tuileries Palace in Paris. 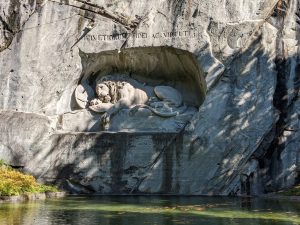 Near the entrance to the Lion Monument park in the Kuppelbau (Dome Building) is another forerunner of moving images, the Alpineum, which has huge diorama paintings by Ernst Hodel senior and junior of some of Switzerland’s most beautiful mountains, including the nearby Pilatus and Rigi (the “Queen of the Mountains”) as well as the Jungfrau, Matterhorn and Mont Blanc. Painted a century ago, their three-dimensional effect is made possible with models of houses and cable cars to create an early ‘virtual’ alpine world. 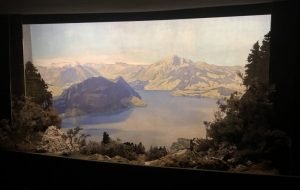 Occupying an upper floor of the glass-encased Culture and Congress Centre Lucerne with its jutting, angular roof, the Kunstmuseum Lucerne collection is made up largely of Swiss art. Highlights include paintings from the Baroque era, an extensive portrait series by 18th century artists and 19th century landscapes. The early 20th century is represented by groups of works by Ferdinand Hodler, Hans Emmenegger, Felix Vallotton and others, while artists from Central Switzerland active in the 1970s are also included. 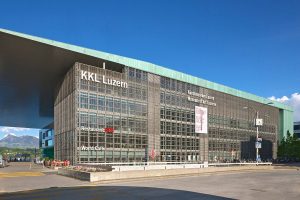 The Kunstmuseum with Mount Rigi in the background

Every year the museum presents portions of the collection under thematic headings (Portrait, Landscape, Animals, etc.), while special exhibitions have included J. M. W. Turner and David Hockney. The light-filled cafe offers superb views of the Old Town, Chapel Bridge and the comings and goings at the busy ferry port. 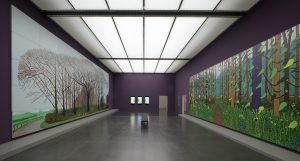 The Kunstmuseum during its 2022 David Hockney exhibition

Located rather incongruously in the grounds of the Swiss Museum of Transport, where its neighbours include real airplanes, a submarine, a paddle steamer, ski lifts and assorted other conveyances, the Hans Erni Museum is devoted to the popular, Lucerne-born Swiss painter, muralist and graphic designer.

The hexagonal, glass-enclosed building displays some 300 of his works from eight decades of activity, many concerned with social and ecological themes and his interest in modern technology. There are also temporary themed exhibitions by other artists. 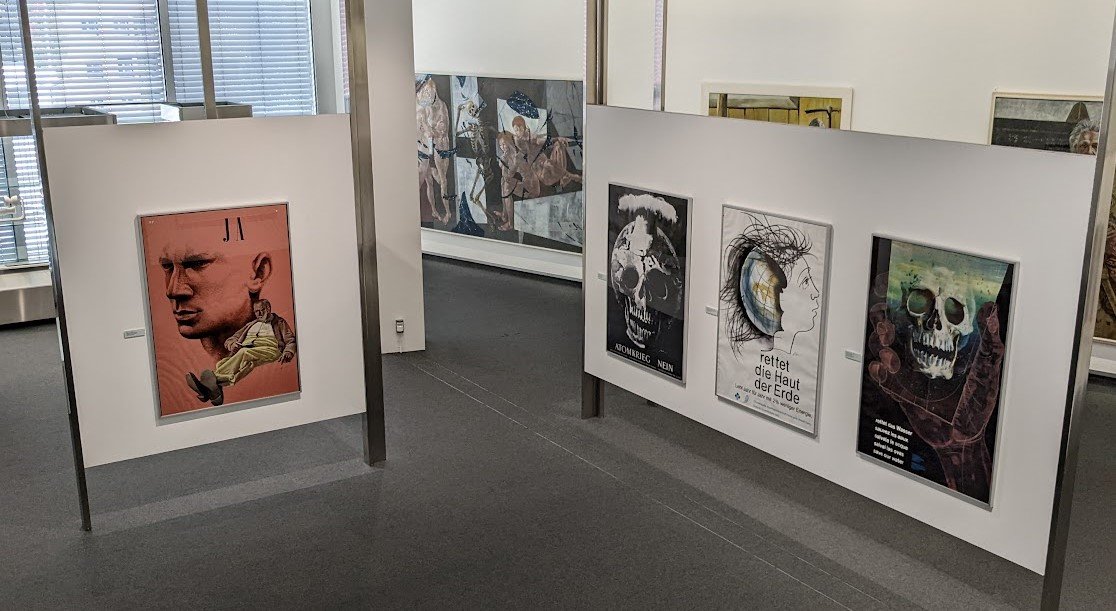 His projects included several Swiss postal stamps and paintings for several Swiss bank notes. (The latter were never issued, as it was rumoured that he had sneaked in Communist propaganda.) He also produced works which were engraved onto Olympic medals, notably the 1992 Gold Medal awarded to the United States’ men’s basketball “Dream Team.” He also curated Picasso’s first Swiss show, in Lucerne.

Between 1802 and 1844, the English painter and watercolourist J.M.W. Turner (1775-1851) visited Switzerland several times to capture the dramatic power of Alpine landscapes. His most famous Lucerne paintings is The Blue Rigi, Sunrise (1842). London’s Tate Britain gallery bought it in 2007 for a record £4.95 million. 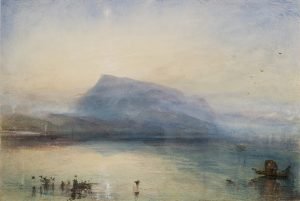 Ironically, Turner never climbed the Rigi, but Queen Victoria (by sedan chair) and Mark Twain (by Europe’s first cog railway) were among the throngs of tourists to marvel at sunrise from its summit. The composer Richard Wagner was not so lucky. On the appointed morning it rained heavily, so he stayed in bed.

The Swiss Travel Pass offers unlimited travel on consecutive days throughout the national rail bus and boat network, including free rail journey from Swiss airport to destination. It also includes the Swiss Museum Pass, which allows free entrance to 500 museums and exhibitions. In Lucerne benefits include a free cable car/cog railway ride up Mount Rigi, a boat trip on Lake Lucerne and free admission to the Kunstmuseum, Panorama Bourbaki, Rosengart Collection and Swiss Museum of Transport, site of the Hans Erni Museum.