Starting just over a hundred miles south of Paris, the valley of the River Loire is home to a series of magnificent chateaux which began to spring up in the early 1500s in an outburst of extravagance by royalty and nobility to herald the end of the Hundred Years War and the beginning of a more peaceful and enlightened period. Some of the most remarkable structures seen anywhere in the world at that time, these gorgeous, Renaissance-inspired chateaux, every one a World Heritage Site, are strung together along a network of country roads interspersed by quiet, picturesque villages.

The largest of all the Loire Valley chateaux, Chambord is the stuff of fairy tales. The first sight of it is jaw-dropping, so immense is its scale and so magical its appearance. The closer you get, the tinier you feel. Based on St Peter’s in Rome, Chambord was built not as a royal residence, but as a hunting lodge. Visiting parties of up to 2,000 people brought their own furniture, equipment and supplies and took everything away again when they left, which is why Chambord’s 440 rooms are virtually empty.

One of the centrepiece features is an extraordinary, stone-carved, double helix spiral staircase, where those going up never meet those coming down – ideal for discreet trysts. The staircase is attributed to Leonardo da Vinci, who spent his last four years in nearby Amboise, where he died in 1519 (leaving the Mona Lisa to the King, his patron).

From the roof terraces, surrounded by a forest of towering chimneys (over 280 of the rooms have fireplaces), there are panoramic views over the surrounding moats and estate. Depending on the time of year, you may see a sound and light show, an equestrian extravaganza or a traditional market. During WWII the Louvre art collection was stored at Chambord, including the Mona Lisa and Michelangelo’s Venus de Milo. That conflict left its mark on the building – bullet-holes as the result of a clash between WWII Allied troops and German units. Incredibly, Chambord remains unfinished. The “Sun King” Louis XIV had even bigger plans for it, which were shelved when he lost his head French Revolution.

The chateau of Cheverny seems to float on an ocean of manicured green lawns. The most abundantly furnished of the chateaux, its themed rooms (boudoir, nursery, bridal chamber and so on) are sumptuously stuffed with paintings, frescos, tapestries, furniture, weaponry and other period pieces, making Cheverny an outstanding example of the history of French decorative arts. Outside, you can stroll around the orangery, ornamental garden, arboretums and “English park”. The chateau was the inspiration for Moulinsart, Captain Haddock’s country house in the Belgian cartoonist Hergé’s ‘The Adventures of Tintin’.

The second most visited chateau in France after the Palace of Versailles, Chenonceau is best known for straddling the river Cher, a tributary of the Loire, on its stone arches. Chenonceau was the scene of a lavish ball for King Francis II and his new bride, the young, French-raised Mary Stuart, later Queen of Scots. The celebrations included the first ever fireworks display seen in France. A central feature is the 60-metre long Gallery stretching over the river. Illuminated by nine facing pairs of windows, it became an escape route during WWII, when one end was in German-occupied territory and the other in the free zone. 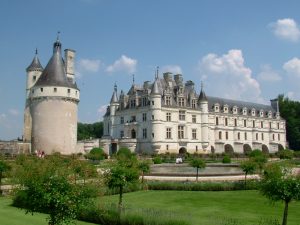 Other highlights include Louise of Lorraine’s Bedroom, decorated with silver tears as she mourned the murder of her husband, King Henry III, and the small library belonging to Catherine de Medici, a serene corner looking out over the river. There are artworks and objets d’art throughout, including French and Flemish tapestries and paintings by Rubens, Van Dyck, Jordaens, Veronese, Poussin, Correggio, Tintoretto and Murillo. In the surrounding gardens the floral decorations are changed each spring, for which 130,000 bedding plants are grown annually on the estate’s 16th century farm. At certain times of the year, the gardens are atmospherically lit and classical music is played through loudspeakers to serenade strollers. And if you really want to get lost in the Renaissance, head for the maze.

Compared to the vast scale of other Loire Valley chateaux, Azay-le-Rideau is positively petite – and all the more charming for it. Built on an island in a tributary of the Loire, its foundations rise straight out of the water, which perfectly reflects the palace. It was built by France’s General Tax Collector, later the country’s Treasurer – and with dubiously acquired resources. He was eventually executed for corruption.

The last of the great Renaissance chateaux built on the banks of the Loire, Villandry is renowned for its sprawling gardens. In 1906 the Spanish-born doctor and medical researcher Joachim Carvallo, great-grandfather of the present owner, acquired the chateau and through extensive research faithfully recreated the original 16th century terraced gardens, which can be viewed in all their splendour from the chateau’s medieval tower, all that remains of a 12th century castle. Amid the gurgle of fountains and other water features, the gardens are completely replenished every year by 250,000 flower and vegetable plants raised in the greenhouses, and the 52 kilometres of box hedge are weeded entirely by hand because of their delicate roots.

The whole site is divided into themes: the Sun Garden, laid out around a star-shaped pond; the Kitchen Garden, where vegetables are chosen for both their taste and colour; the Herb Garden, where species are both aromatic and medicinal; the Ornamental Gardens, with sections devoted to different aspects of love (tender, fickle, passionate, tragic; and the Water Garden, where a small lake collects the water to irrigate the gardens and feed the fountains.

The chateau’s bright, airy interiors have a welcoming, lived in feel. A particular highlight is the Oriental Drawing Room with its stupendous, decorative ceiling made by Moorish craftsmen. It came from the 15th century Maqueda ducal palace in Toledo, Spain. Dismantled in 1905 when it was acquired for Villandry, it took a year to reassemble its 3,600 pieces.