One of Europe’s best value destinations for art-lovers

Lisbon has been named several times as the best value city in the Eurozone for meals, drinks, sightseeing, travel and accommodation. The Portuguese capital is known for its year-round pleasant climate (including the warmest winters of any European metropolis), rich culture and grand architecture. Europe’s only coastal capital, Lisbon is the oldest city in Western Europe and the second oldest capital on the continent after Athens. Sitting at the mouth of the river Tagus, it is full of old world charm.

Lisbon also boasts world class museums showing virtually the entire spectrum of artistic output from antiquity to the present day. Many of the public and private collections are housed in former palaces and convents which would be worth a visit even without their museum displays. 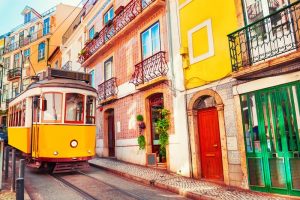 Lisbon’s iconic trams are a great way to get around

In its sleek complex overlooking the beautifully landscaped Parque Santa Gertrudes, the Museu Calouste Gulbenkian is named after the Turkish-born oil magnate and one of the 20th century’s wealthiest men, who amassed one of the world’s finest private collections. The 6,000 pieces (he called them his “children”) date from antiquity to the early 20th century and include examples from Egypt, Greece, Babylonia, Persia, the Islamic Orient, Europe, China and Japan.

Gulbenkian’s dream of a museum to house his collection took over 30 years to realise. As early as 1937 he started discussions about a “Gulbenkian Institute” at the National Gallery in London. After a diplomatic spat with the British Government during, he considered the National Gallery of Art in Washington before settling on Lisbon. The entire collection was brought to Portugal and in 1969 his wish to see it housed under one roof was fulfilled with the opening of the specially built museum.

French art and decorative arts are particularly prominent, reflecting Gulbenkian’s lengthy residence in Paris and including Regency furniture and Beauvais, Aubusson and Gobelins tapestries. Both sections end in a room devoted to Art Nouveau, including a collection of jewellery and glass by René Lalique.

On the other side of the park – you’ll pass a Henry Moore sculpture in the garden on the way over – is the Centro de Arte Moderna (CAM), also run by the Gulbenkian Foundation. You can buy a joint ticket to visit both. CAM’s permanent exhibition includes drawing, painting, sculpture and installation, with a special focus on Portuguese art produced in the first decades of the 20th century. The display changes annually to showcase a selection of works from the museum’s collection of around 9,000 pieces. This is complemented by an annual temporary exhibition of works by Portuguese and international artists.

A highlight is the largest existing collection of work by Amadeo de Souza-Cardoso, who produced an extraordinary body of work of various genres at breakneck speed until his early death of Spanish flu aged 30, when his career was at its height. There are also works by British artists such as David Hockney and Anthony Gormley.

Jump on the No.15 tram to the Belem district in the western part of the city, where across the street from the massive Jeronimos Monastery (a UNESCO World Heritage Site) and next to the Praca do Imperio (Empire Square) with its impressive fountain, you’ll find the Belem Cultural Centre, Portugal’s largest cultural building. A modern take on a medieval ‘castillo’ made of huge sandstone blocks, this sprawling complex is home to the Berardo Museum and one of the world’s most acclaimed collections of modern and contemporary art rivalling anything in New York, London or Paris.

The achievement of Madeira-born businessman Jose Manuel Rodrigues Berardo, the eye-popping collection comprises over 900 works representing dozens of artistic movements. A list of the artists reads like a Who’s Who of modern art, including Warhol, Picasso, Dali, Duchamp, Magritte, Modigliani, Miro, Bacon, Pollock, Koons and many more – over 170 in all. Strolling through the Berardo is like taking a walk through the history of 20th century art. Tip: After your visit, cross the street to Pasteis de Belem, named after the custard-filled pastries served warm and oven fresh in this legendary Lisbon cafe dating from 1837 and decorated with its original wall tiling.

A stone’s throw from the magnificent triumphal arch leading to the Praca do Comercio (Commerce Square) and the waterfront, the Museu do Design e da Moda (Museum of Design and fashion, or MUDE – which also means ‘change’ in Portuguese) is one of the world’s leading museums of 20th century design and fashion. Located in a former bank building stripped down to bare walls, concrete floor and supporting pillars to focus attention on the collection of over 2,500 objects, the museum traces the history of design from the 1930s to the present in furniture, electrical appliances, glassware and other household objects, many of which are now so everyday that their revolutionary design and function are hardly considered. (Think Post-Its.)

In all, there are works by some 230 designers responsible for starting worldwide trends, including icons such as Phillipe Starck, Charles Eames, Gerrit Rietveld and Arne Jacobsen. The museum also holds Portuguese businessman Francisco Capelo’s fashion collection of some 1,200 couture pieces by famous names such as Jean Paul Gaultier, Vivienne Westwood, Yves Saint Laurent and Christian Dior.Do not miss the beautiful mosaic from 1962 between the ground floor and the lower level left over from the Banco Nacional Ultramarino days.

For an excellent overview of Portuguese art from 1850 to 1975, head for the Museu Nacional de Arte Contemporanea (MNAC), which houses the country’s most important collection of state-owned modern and contemporary art. The permanent exhibition includes works by Portugal’s greatest artists, such as Veloso Salgado, Silva Porto (dubbed “the divine master”), Carlos Reis, Sousa Lopes, Jose Malhao, Aurelia de Sousa and Antonio Carneiro. The building stands on the site of a former monastery which was later used as a biscuit factory, and the temporary exhibition space, the Sala dos Fornos (Oven Room) is named after the brick ovens which still line the corridor outside it.

Limited exhibition space restricts the display to around a hundred works at a time from a collection of over 5,000 pieces. These are arranged by chronology and artistic movement, starting in the late 1870s, when the first Portuguese painters supported by the state to study in France returned home, bringing with them the new trend of capturing the light and climatic features of landscapes in open air painting. The visitor is then taken on a crash course through the last century of Portuguese art. There is also a sculpture garden featuring 19th and 20th century bronze works.

Housed in a 17th century palace with an extension in the former convent of Santo Alberto, the Museu Nacional de Arte Antiga (MNAA, or National Gallery of Ancient Art) houses a vast collection of European art and artefacts from the Middle Ages to the 19th century, including painting, sculpture, metalwork, ceramics, textiles, furniture, drawings and other decorative arts.

The many highlights include: an astonishing sold silver table centrepiece belonging to King Jose I (1750-77); a monstrance reportedly created out of gold brought back to Portugal from East Africa by the famous admiral and explorer Vasco da Gama; and the 15th century Saint Vincent Panels attributed to Nuno Gonçalves. Featuring 60 people from all levels of late medieval Portuguese society venerating Saint Vincent, the patron saint of Lisbon, it is one of the first collective portraits in European art. The MNAA also has a selection of European paintings by Hieronymus Bosch, Pieter Bruegel the Younger, Albrecht Dürer, Lucas Cranach, Piero della Francesca, Holbein, Raphael, Tintoretto, van Dyck, Velazquez and others.