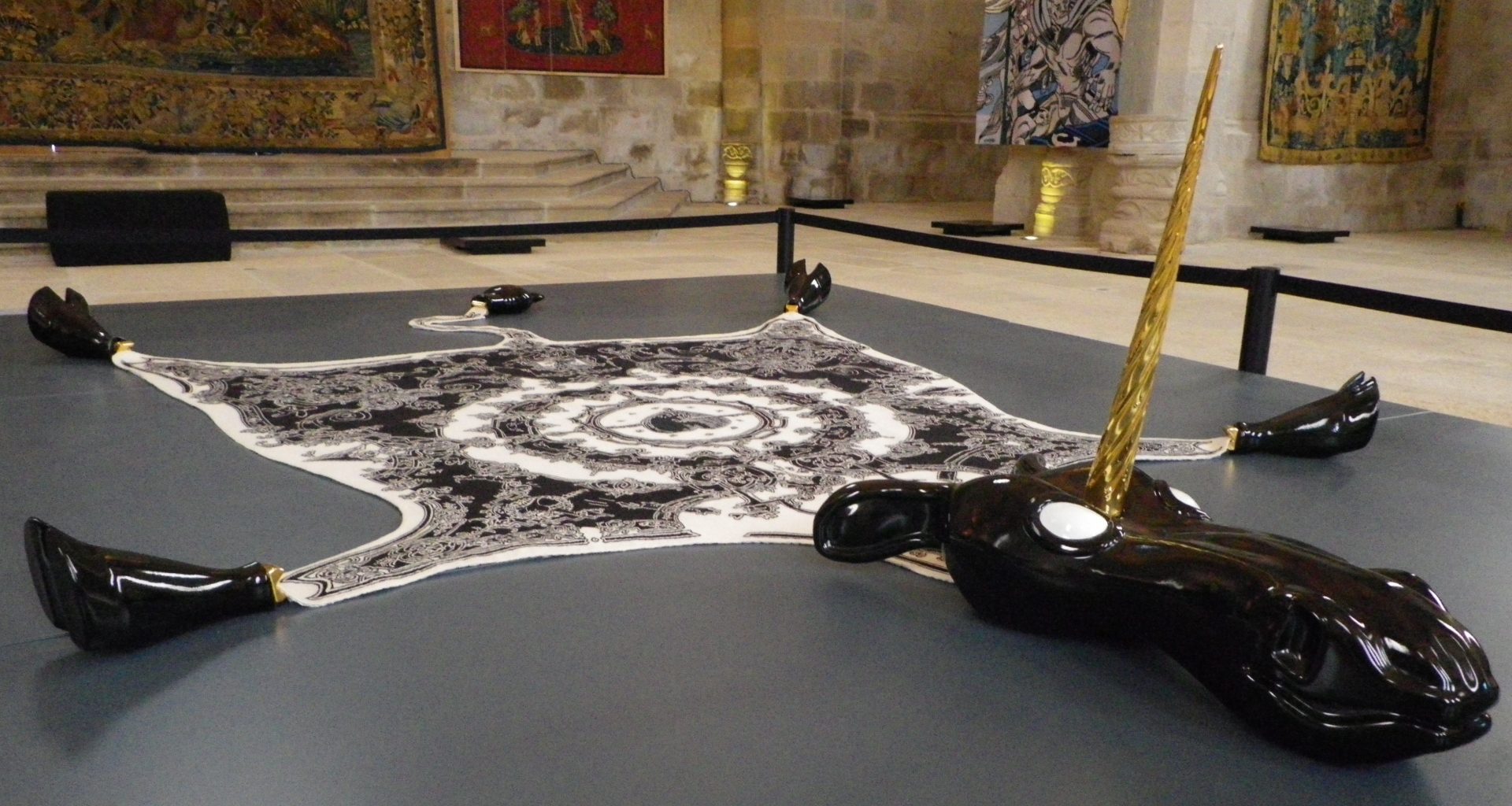 Deep in rural France, or ‘la France profonde’, the Limousin region is a centre of ancient crafts

The region’s capital, Limoges, has a charming old town of cobbled streets and stone and granite houses with timber-framed facades. There is also a splendid 16th century Gothic cathedral. Railway travellers arrive at the imposing 1920s station, with its 31-metre high dome, clock tower twice the height and a concourse lined with neo-classical sculptures and Art Deco stained glass windows. But it is for its “arts du feu”, or “fire arts”, that Limoges is best known – porcelain, enamel and stained glass, all dependent on fire for their creation.

Key to the success of the Limoges porcelain trade was the discovery nearby in 1768 of kaolin, a fine, white clay long known to the Chinese. Thanks to this “white gold”, known for its translucence and delicacy, today Limoges factories produce about half of all porcelain made in France. Collectors of Limoges porcelain look for a factory mark and a date of manufacture between the late 1700s and around 1930, when decoration became less elaborate to appeal to more modern tastes, as seen in designs by artists such as Jean Cocteau, Pablo Picasso and Raoul Dufy. Similarly, some manufacturers now focus on tableware for everyday use rather than traditional, decorative items such as vases, trays and tankards.

Valued for their timeless elegance, porcelain sets are found on the tables of monarchs and heads of states and many pieces have become heirlooms passed down from generation to generation. Decoration can often be more important than age and premium prices are paid for quality, hand-painted objects, especially if signed or marked by the artist.

In its beautiful Art Deco building the Adrien Dubouché National Museum has about 12,000 porcelain pieces from all over the word and different periods. Visitors can learn about porcelain production from raw materials to finished product in a guided tour of a factory, two of the oldest of which are Haviland and Barnardaud.

Dating back to ancient Egypt and Greco-Roman antiquity, the region’s other famous material, enamel, is used to decorate objects in amazingly intricate detail. The city has been known for its enamel craft for a thousand years. A Limoges enamel crucifix dating from around 1200 was found under a heavy stone near Salisbury Cathedral and by the French Renaissance Limoges had become the leading enamel centre.

A mixture of lead oxide, sand, sodium and potash is fired at high temperatures to produce a thick, liquefied material with a vitrified appearance which is overlaid onto a metal plate – usually copper, but also gold and silver. Originally, objects were mainly religious in nature, such as reliquaries to hold sacred items, covers for religious books or tableaux telling bible stories. Output later expanded into objects like vessels, candlesticks, mirror backs and jewellery.

Limoges Cathedral has a magnificent black Madonna and Child in enamel, which featured on three metre-high posters to advertise an exhibition on Romanesque France at the Louvre in Paris. There are also exhibitions at the Maison de l’Émail (Enamel House), where visitors can watch craftmakers at work.

Housed in the former Bishop’s Palace, the Museum of Fine Arts has some 500 enamel pieces ranging from the Renaissance to Art Deco. The museum also has some fine examples of Limoges stained glass, notably by Francis Chigot, whose work graces the railway station and can be seen as far away as in Montreal Cathedral. 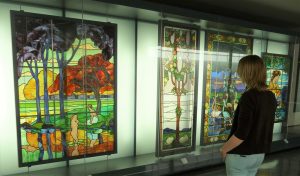 The Museum of Fine Arts has beautiful examples of stained glass

About 85 kilometres north of Limoges is the village of Crozant, which gave its name to the movement coined for the landscape painters who began to flock to the area in the mid-1800s. This group of artists was breaking away from the neoclassical and romantic traditions and abandoning the dramatic, mythological themes of the time to take their inspiration from nature.

Leaving their studios, they jumped on the growing railway network and, using the newly invented tube paints which enabled them to paint ‘en plein air’ (and taking advantage of the low cost of living compared to Paris), they set up their easels in picturesque spots around France, including the valleys of the Creuse and Sédelle rivers, which became favourites with the burgeoning Impressionists.

Among them was Claude Monet, who spent the spring of 1889 there, often starting the same scene several times as the atmosphere changed during the day, thus introducing the concept of a series. There are at least 23 known works by Monet from this period in museums around the world.

Today you can walk along riverside painters’ trails past converted watermills (a favourite subject of the artists) with interpretation boards showing scenes at the very spots where they were painted. Just outside Crozant is “Monet’s site”, a high vantage point overlooking the ruins of a huge citadel at the confluence of the Petite Creuse and Grande Creuse rivers. A path dubbed In the Footsteps of Monet leads to the spot.

With an abundant supply of wool and pure water for dyeing, tapestry weaving has been a mainstay in the region since the Middle Ages, when the craft helped to warm the stone walls of castles and cathedrals. Today the ‘twin towns’ of Aubusson and Felletin are world famous tapestry centres. Between them they form the largest area of private tapestry production in Europe and their ‘savoir faire’ is a recognised UNESCO Intangible Cultural Heritage.

The “woven art” assumed a more modern look when the French government and private collectors commissioned designs from artists such as Calder, Vasalery, Picasso, Léger, Braque and Dufy and today young designers are encouraged to bring a fresh eye to tapestry. As a result, tapestries have sported imagery and symbolism ranging from from Bugs Bunny, Pacman and video games to tragedy masks, Mayan civilisation and Alice in Wonderland.

In Aubusson, the Tapestry Museum exhibits nearly 600 years of tapestry, while in Felletin, where a weaver was first mentioned in 1457, the Église du Chateau (Castle Church) has been turned into a tapestry gallery. The largest tapestry in the world (250 square metres, in England’s Coventry Cathedral) was made in Felletin, which has also produced works for the National Gallery of Ireland and Sydney Opera House. Souvenir tip: Specialty shops sell sections of various sizes cut from ‘cartoons’, the full size paintings of intended tapestries which act as patterns for the weavers. Some also have weaving demonstrations.

About 55 kilometres east of Limoges is the Lac de Vassivière. The third largest lake in France, it was created as a reservoir with the completion of two dams in 1950, flooding the landscape and engulfing eight villages. With its beautiful setting and bountiful water sports it is Limousin’s number one visitor attraction.

Of interest to art-lovers is the island in the middle. Reached by water taxi or a a little motorised tourist train across a man-made causeway, it is home to the International Centre of Art and Landscape. Opened in 1991, it was designed by the Italian architect Aldo Rossi, who created a long, white, tunnel-shaped building symbolising the horizontality of the lake with a timber-beamed roof like an upturned boat and windows resembling Roman aqueduct arches to symbolise the watery surroundings. Continuing the nautical theme, an adjacent lighthouse-like building symbolises the verticality of the island’s trees. Climbed by an interior spiral staircase, it offers magnificent views of the island and lake..

The Centre hosts changing exhibitions, especially of conceptual works and installations created through its artists in residence programme and inspired by the surrounding area. Visitors can take self-guided walks to view over 60 pieces of site-specific sculpture dotted around the island (70 hectares, or over 170 football fields, in size) created by artists such as Thomas Hirschhorn, Michelangelo Pistoletto, David Nash and Andy Goldsworthy.