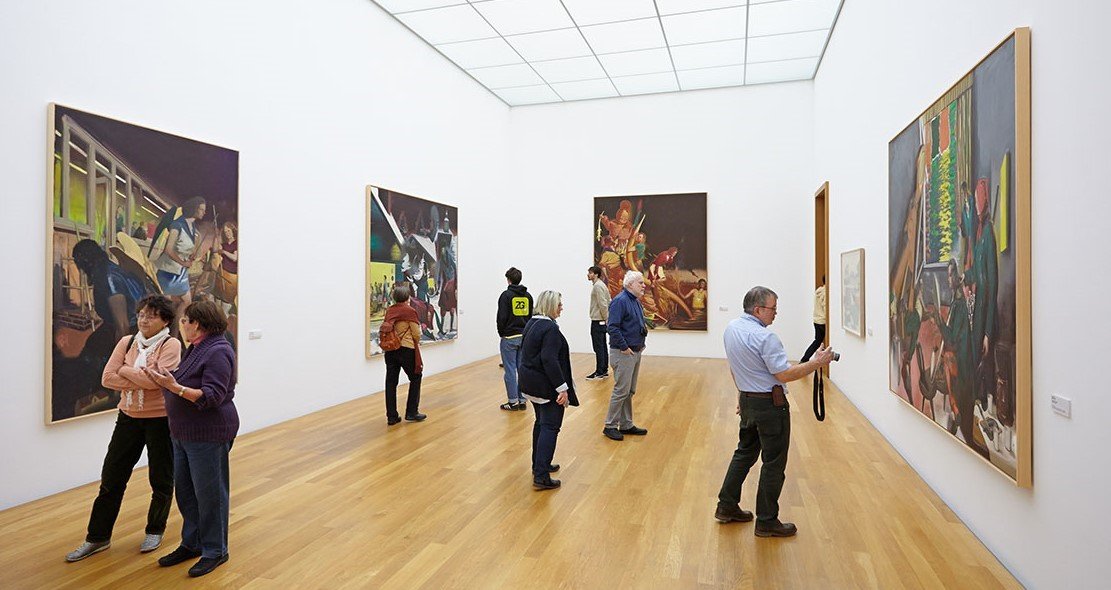 Leipzig has a new Museum of Fine Arts, the New Leipzig School and new art hubs in old industrial buildings.

Historically, Leipzig’s standing was as a medieval mercantile centre at the crossroads of major trade routes in the middle of Europe. Today the city continues to host major fairs and has become a distribution hub for both Amazon and DHL. Politically, the city wears the leading role it played in the Peaceful Revolution of 1989 like a badge of honour. After prayers for peace at the St Nicholas Church, the “Monday demonstrations” became the most prominent mass protests against the East German government.

Culturally, Leipzig is probably best known as a city of classical music, with stellar names like Kurt Masur, J.S. Bach, Richard Wagner and Felix Mendelssohn often wowing audiences there. It is also home to the legendary Gewandhaus Orchestra. Walking around the compact city centre you may spot brass ribbons embedded in paving stones symbolising ‘Spring like a river moves through the air’ from Robert Schumann’s Symphony No. 1.

Artistically, Leipzig is where Germany’s first association of the fine arts was founded and the city’s contribution to visual art is often referred to in terms of ‘schools’, even if the artists themselves do not always accept the description. The most recent wave, the ‘New Leipzig School’, is themovement’s third generation after its original founders followed by their students.

After the destruction of its original, Italian Renaissance-style building in a WWII air raid, the Museum of Fine Arts went on a 60-year odyssey through several temporary homes. The collection is now settled in the city centre in its cavernous, 36-metre high glass cube, with exposed concrete, shell limestone and oak dominating the interior. Its courtyards and terraces echo the famous ‘Passagen’ (passages) – arcade-like connections which still link many Leipzig buildings.

The museum’s collection includes approximately 3,500 paintings, 1,000 sculptures and 60,000 graphic works spanning European art movements from the late Middle Ages to the present day. German artists and movements are particularly well represented. They include the Renaissance (Lucas Cranach, Hans Holbein), the Romantics (Caspar David Friedrich), Impressionism (Max Liebermann, Lovis Corinth), Symbolism (Max Klinger), Expressionism (Leipzig-born Max Beckmann, who has a room of his own), Neue Sachlichkeit (New Objectivity, as in the work of Otto Dick) and the three generations of the Leipzig School. The highlight of the sculpture collection is the massive Beethoven sculpture by Max Klinger, dominating the room which also houses his huge painting, Christ in Olympus.

On the third floor of a former data centre built in the late 1980s (and resembling a giant accordeon), the entrepreneur Steffen Hildebrand shows selections from his private collection in G2 Kunsthalle. (‘Kunst’ is German for art.) The 1,000-plus square metre space is ideal for presenting contemporary art, with the works popping out from dazzling white walls and reflecting off the smooth, bare floors.

The focus of the collection, contemporary painting in Leipzig, is presented in annually changing exhibitions by established and emerging post-reunification artists, notably of the New Leipzig School. Some of the more popular works remain on permanent display. Visits are by appointment for a guided tour. The exception is Tuesdays, when the gallery is open to all.

Named after a Leipzig businessman of Italian descent who bequeathed funds to the city to build art venues, the Grassi Museum is one of around 20 “Cultural Lighthouses” in the German government’s Blue Book of culturally significant sites in the former East Germany. The “Wow!” factor comes when entering the stunning Art Deco ‘Pfeilerhalle’ (Pier Hall), with its floor to ceiling triangular columns. All radiant red and shining gold, it is surely one of Europe’s finest gallery spaces.

The stunning ‘Pfeilerhalle’ (Pier Hall) in the Grassi Museum

Within a short distance of one another in the Plagwitz area west of the city, several venues born out of former industrial sites have driven the emergence of a lively creative quarter.

Once the site of Europe’s largest cotton-spinning mill, the Spinnerei covers an area equivalent to about two dozen football fields. Obsolete by the early 1990s, by which time the cotton industry had shifted to Asia, the complex underwent several changes of use before emerging as the art and craft hub it is today with the slogan ‘From cotton to culture’.

Where once stood a 19th century factory town complete with workers’ homes, allotment gardens and a kindergarten (all of which have survived intact), there is now an artists’ village of over 100 studios (including those of New Leipzig School members Neo Rauch and David Schnell), galleries (such as the influential Eigen+Art in the former steam engine hall) and exhibition spaces. Other residents include architects, printers, fashion designers, a goldsmith, a pottery, a porcelain manufacturer and an enormous arts supply store. Artists and makers open their studios to the public three times a year.

Built in 1863 as a gasworks, taken over by a tram company, then turned into a power station, the Kunstkraftwerk (Art Power Station) has retained many of its original features and fittings such as boilers, a coal funnel, a dust filter, steam distributor and conveyor belts. Softly illuminated, these exposed mechanical innards now resemble metal sculptures.

No effort has been made to sanitise the imposing building, and the bare brick walls and floors seem permeated by the smell of machinery and fuel, making for an intoxicating mix of bygone industry and contemporary art. The walls and floor of one huge space act as projection screens for immense, immersive sight and sound installations such as the Van Gogh Experience, enveloping visitors in Vincent’s art.

Another repurposed industrial site in Plagwitz is the Tapetenwerk, formerly home to the second largest wallpaper factory in Germany. (In the 1990s it produced place mats for Lufthansa.) The former manufacturing hall, workshop areas and office buildings are now home to nearly 20 artists, makers, designers and architects who exhibit their work in the on-site galleries and stage a “Tapetenwerkfest” twice a year to give visitors a close-up look at their work spaces and methods.

The term New Leipzig School came into use in the early 2000s, the third phase of a movement first established by artists in the late 1970s in communist East Germany, then progressed by their students such as Arno Rink.

The third generation, the New Leipzig School, relates to post-reunification art characterised chiefly by a combination of figurative and abstract elements. Prominent painters in this group are Neo Rauch and David Schnell and parallels can be seen between their successes and those of the Young British Artists (YBAs). While used as a label and marketing tool in the world of art dealership, “Leipzig School” is a tag most of the artists reject because of its its vagueness.