Finland’s cool capital is a hot destination for art-lovers.

The fastest growing capital city in the EU, Helsinki is a compact city of around 650,000 residents spread out from Senate Square, the official centre of town, where steep steps lead up to the Cathedral, gleaming brilliant white under its turquoise onion domes and glittering gold statues. Most of the city’s buildings date from the 1850s (the oldest stone building was erected in 1857), when an extensive construction programme was undertaken to celebrate the new capital after it assumed the role from Turku.

Helsinki’s defining feature is water. The city is virtually surrounded by it, and nearly three quarters of its total area are covered by it. With almost 100 kilometres of coastline (including two dozen bathing beaches), several harbours and ocean-front parklands, you’re never far from a sea view.

First stop on any art tour of Helsinki has to be the Ateneum Art Museum. Home to the country’s most extensive collection, it tells the story of Finnish art from the 1750s to the early 1960s. Opened in 1888, the Ateneum’s grand entrance hall and stairway hark back to the days when an art gallery was a place of reverence. The works are displayed in themed rooms such as Landscape, Portraits, Symbolism and Echoes of War, from an era when artists reflected the threats and anxieties in society.

The Ateneum is unsurpassed in showcasing the ‘golden age’ of Finnish art (roughly, from the 1880s to 1910), with many national treasures on view by beloved national names such as Albert Edelfeld, Pekka Halonen, Helene Schjerfbeck and Akseli Gallen-Kallela, who were often inspired by Finnish folklore and mythology such as The Kalevala, a collection of ancient poems. As well as some of the best loved Finnish artworks, the Ateneum has a small selection of international art from the late 19th century to the 1950s, including works by Gaugin, van Gogh, Cezanne and Chagall, and a gallery dedicated to special exhibitions. PLEASE NOTE: The Ateneum will reopen in April 2023 after a year-long renovation.

Continuing the story of Finnish art from the 1960s onwards is the nearby Kiasma Museum of Contemporary Art, a sleek, white, minimalist building on five levels connected by a curved ramp. Taking its name from the Greek word for ‘crossing point’ (and also a term for the intersection of optic nerves), the museum focuses on Nordic, Baltic and international contemporary art, including installations, paintings, film and photography.

On the upper floor of a former tennis centre which has been renovated as a retail, restaurant and cinema complex, the Helsinki Art Museum, or HAM (motto: ‘Popcorn for the brain’), shows a terrific collection of Finnish and international 20th century art under a sweeping, curved roof in a light, airy, hangar-like space ideal for viewing large scale works. The 9,000-piece collection includes some of the top names in modern art, such as Niki de Saint Phalle, Roy Lichtenstein and Louise Bourgeois. Most public artworks and statues dotted around the city streets and in parks belong to the HAM collection.

Opened in 1928 in a building which is one the finest examples of Finnish neo-Classical design, the Kunsthalle (Art Hall) displays contemporary art and design under soaring ceilings. Look out for lovely touches such as period tile, a patterned ‘cassette roof’ in the main art hall and repeated round shapes echoing the medallions on the exterior walls. 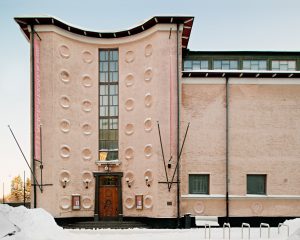 In 1921 the brewing magnate Paul Sinebrychoff bequeathed his private art collection, the largest in the Nordic countries at the time, to the state. His mansion is now home to the Sinebrychoff Art Museum, where the sumptuous interiors, including antique furniture, silverware, porcelain and other objets d’art, seem frozen in time, giving an insight into stylish early 20th century living.

Surrounding them is Finland’s most significant collection of paintings by foreign Old Masters, ranging from the 14th century to the 1850s and including works by Flemish, Dutch, Italian, English and French artists such as Cranach, Rembrandt, Tiepolo, Daubigny and many others. The lower floor, with its vaulted brick ceiling, is an atmospheric setting for displaying religious icons.

Opened in 2018, Amos Rex is Helsinki’s newest art museum. The spectacular subterranean complex has large, street-level skylights like bulging eyes, where passers-by can peer down into the gallery spaces below. Named after the newspaper publisher and arts patron Amos Anderson (1878-1961), the museum has a permanent display of the post-Impressionist collection assembled by the architect Sigurd Frosterus (1876-1956), best known for designing the nearby Stockmann department store (of which locals say, “If you can’t get it at Stockmann, you don’t need it”. Amos Rex also shows changing exhibitions by living artists as well as loaned works.

Helsinki is home to Europe’s biggest independent cultural centre. Spread over a 12-acre site, the Kaapeli (Cable Factory) formerly produced telephone and electricity cables before becoming a Nokia factory. (The mobile phone company is Finland’s biggest international brand.) Today it has been converted into a complex of artists’ studios, galleries, theatre and dance spaces, radio stations and a popular cafe-restaurant. Nine hundred people go to work there every day.

A couple of areas show off Helsinki’s Art Nouveau heritage best. In the Katajanokka district, Luotsikatu (‘katu’ is Finnish for street) is arguably the city’s best preserved street, while Huvilakatu in the Kalliolinnantie district has some of the city’s most attractive houses of their kind. 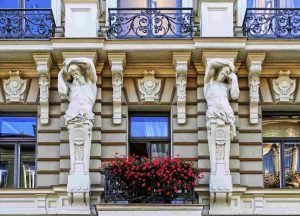 Even if you’re not planning to go anywhere, pop into the Central Railway Station opposite the Ateneum Art Museum, where four granite, torch-bearing giants guard the main entrance to the building, named one of the world’s most beautiful stations in a BBC survey. The interior walls feature beautiful murals and there are many elegant touches in the facings and fixtures.

The Finns, like their Scandinavian neighbours, are passionate about design. They talk about it like other people talk about food or sex. So what is it with the Scandinavians and design? One explanation is their harsh climate, the theory being that people are forced to spend so much time indoors during the long, dark winter months that they avoid going stir-crazy by surrounding themselves with beautiful things. This passion for design extends to everything from forklift trucks, watches and crash helmets to bicycles, trains and running shoes.

Behind the grand, red brick facade of the Design Museum, Finnish Form is a permanent exhibition of objects from the second half of the 19th century to the present, exploring the role that design plays in society in line with legendary designer Eero Aarnio’s credo that ‘the ultimate purpose of design is to make our lives easier and function better’. Aarnio gained worldwide attention for his Ball Chair, first introduced in 1966.

The glassware company Iittala is best known for its iconic Aalto (Finnish for ‘wave’) design. First introduced at the 1936 Paris Exhibition, it was once chosen by Finnish consumers as their top national brand. Designed by Alvar Aalto (1898-1976), a revered figure in Finland, it has been used for everything from vases and candle-holders to napkin-holders and ice cube moulds. Whereas elsewhere in Europe Iittala is sold in specialty stores, in Finland you can pick up a piece in your local supermarket.

Describing their work as ‘a piece of art with the human brody as a frame’, Kalevala is an iconic name in Finnish jewellery design. The company first made replicas of objects in the National Museum. Today most of the designs are new, often with a story behind them, such as the Carmen and the Tales of Hoffmann collections based on operas presented by the Finnish National Opera.

Helsinki is a UNESCO City of Design, and a whole area has been designated the Design District, a cluster of streets where 200 showrooms, galleries, jewellers and vintage and antiques stores sell their wares. Pick up a map at any outlet and explore for yourself or join a guided tour. The annual Helsinki Design Week,the biggest design event in Northern Europe, practically takes over the city centre.

For the “Wow!” factor, head over to the Tempelliaukio Church. Quarried out of solid bedrock, the ‘church in the rock’ has massive copper dome, making it look from the outside like a flying saucer. Its interior walls are bare stone and it even has its own natural water feature.

Music-lovers may want to make a pilgrimage to the weird memorial to Finland’s most famous contributor to the music world. No, not Eurovision winners Lordi (remember them?), but the composer Jean Sibelius. The Sibelius Monument is an odd steel and stone structure – are they stalagmites or organ pipes? – overlooked by a glowering giant head of the maestro. Most of Sibelius’ symphonies were premiered at Finlandia Hall, home to the Helsinki Philharmonic, with the composer himself conducting.

If all this gallery-hopping and design-discovering gets too much, head for the Kamppi Chapel in the city centre. Also known as the “Chapel of Silence”, this extraordinary building, a blend of spruce, alder and ash, is intended to be a place of calm just off Helsinki’s busiest street. 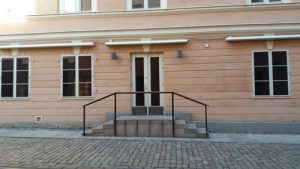 You won’t see any conspicuous signage announcing the location of Trillby & Chadwick in a quiet street off Senate square. Taking its cue from secret speakeasys during American prohibition, this discreet cocktail bar goes quietly about its business behind a plain door, where a knock brings a member of staff to slide open a peeking slot to check you over before buzzing you into a cozy lounge filled with quiet conversation and cool jazz. 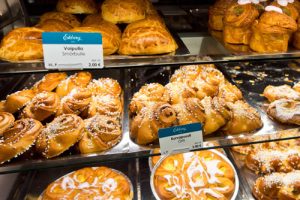 The Finns drink more coffee per capita than any other nation on earth. Helsinki’s oldest cafe is probably also its best. In operation since 1852, Cafe Ekberg has been in the same family ever since. Indulge yourself with the most popular item on the menu, a slice of Napoleon cake. In Esplanad Park Cafe Kappeli is a fin de siècle beauty where the light streams in through high windows and you can relax with a good book or watch the world go by. In summer, little tent-cafes spring up around the park to give the locals their caffeine ‘fix’. 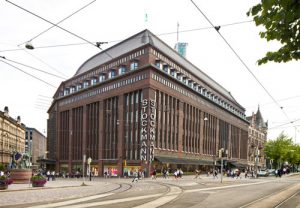 Stockmann, the biggest department store in Scandinavia, has a bewildering choice of goods. Locals say that if Stockmann doesn’t have it, you don’t need it. This is a good place to pick up that can of reindeer soup you’ve been looking everywhere for.