France’s charms are legendary, including mediaeval cities, classical art museums and a fascinating history. It’s all there in its northernmost region, Hauts-de-France, writes David White.

The region’s capital, Lille has one of the largest art museums in France, the Palais des Beaux-Arts (Palace of Fine Arts). Purpose-built under Napoleon Bonaparte, its collection of art and antiquities includes works by the likes of Raphael, Donatello, Van Dyck, Rembrandt, Goya, El Greco, Toulouse-Lautrec, Delacroix, Rubens and Rodin. You can follow a ‘highlights’ route with audio commentary via a QR code on your phone, tailored to how much time you have available. 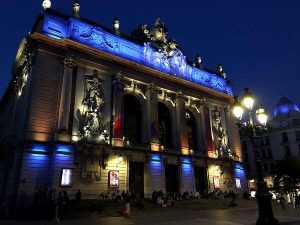 Small galleries are dotted around the old town, but the quarter’s charm lies in just wandering through its 17th century, stone-paved streets, taking in the architectural details, the characterful shop fronts and enjoying the convivial, uniquely French cafe lifestyle.

Lille’s driverless metro leads to nearby Roubaix, where the Art Deco swimming pool has been converted into an art museum, La Piscine (French for swimming pool), dedicated to 19th and 20th century fine art and applied arts. Making the most of its elegant architecture, a vestige of the town’s industrial and craft heritage, the building’s central pool reflects its massive, semi-circular stained glass window. 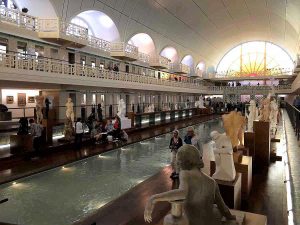 Highlights include: a textile collection of several thousand sample books and fabric swatches ranging from Coptic Egypt to contemporary creations; fashion and jewellery collections; ceramics by the likes of Picasso, Dufy and Chagall displayed in former changing booths; a sculpture gallery with works by Rodin, Bourdelle, Maillol, Giacometti and others and an authentic recreation of the sculptor Henri Bouchard’s studio; paintings by Ingres, Vuillard, Bonnard, Vlaminck, Mondrian, Dufy and Vallotton; and works by the Roubaix School of painting.

A two-hour ride south on SNCF, France’s state-owned railway company, is the pretty city of Amiens. Here is its giant, 800-year-old Notre-Dame Cathedral – much bigger than its namesake in Paris – which boasts the epitome of cavernous, gothic interiors, dazzling stained glass and an intricately sculpted western facade. At certain times of the year this serves as the ‘projection screen’ for Chroma, a spectacular ‘son et lumiere’ show, which highlights how the original facade was picked out in myriad bright hues, now much faded. 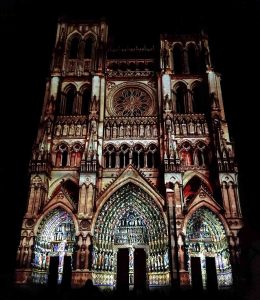 Notre-Dame Cathedral in Amiens illuminated to show its ‘original’ colouring

The palatial Musee de Picardie (Amiens is the capital of the Picardy region) hosts a range of artefacts and fine arts, from archaeological collections to contemporary art. Highlights include work by the leading modernist and local boy Jean Helion and abstract neon artist Francois Morellet and an extensive sculpture collection, including preparatory maquettes for German sculptor Stephan Balkenhol’s L’homme et sa Bouée (The Man and his Buoy), which stands in the middle of the River Somme running through Amiens. 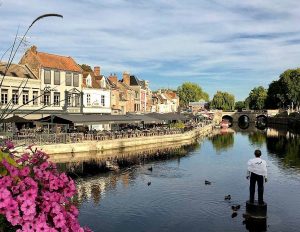 Another local, cherished beyond all others, is the writer Jules Verne, who moved to the town to write his extraordinarily imaginative fictional voyages such as Around the World in Eighty Days, Journey to the Centre of the Earth and 20,000 Leagues Under the Sea. His house is open to visitors, as is the nearby Cirque Jules Verne, which he established and which mounts regular theatrical shows. Statues and commemorative signage in the man’s honour are dotted around the town. 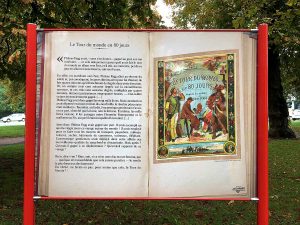 Another race along train tracks across open country leads to Compiegne, a small, trim town on the river Oise, sans cathedral or giant museums, but with a chateau to match any other.

Built by Louis XV and XVI, the Chateau de Compiegne was remodelled by Napoleons I and III as a centre for court life. Kings and emperors favoured the town for its proximity to the Foret de Compiegne, which provided a playground for recreational hunting and horse riding. Nowadays visitors can admire the chateau’s sumptuous imperial chambers and art collection. 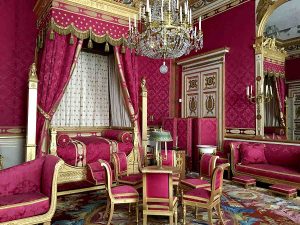 The Emperor’s Chamber at the Chateau de Compiegne

Compiegne is founded on the abbey of Saint Corneille, which these days is home to the Musee du Cloitre (Cloister Museum), housing religious art and sculpture dating from the 13th century. When wandering around the abbey’s cloister, you can appreciate being in a quiet town, where noisy crowds are replaced by a monastic hush.

A ticket to the Musee du Cloitre includes admission to the Musee Antoine Vivenel, named after its architect-collector founder and a centre for the study and display of crafted artefacts from prehistory to the mid 19th century. 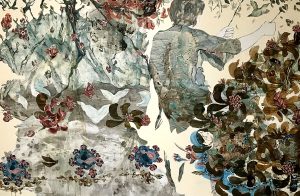 Nearby, the Romanesque Eglise Saint-Pierre des Minimes, created in 1601, is now a municipal space for temporary art exhibitions. Once again, under its airy, stone arches the pace is calm and perfect for enjoying art without distraction.

Also on the River Oise, Chantilly is famous for its race course, lace (of course) and the Chateau de Chantilly. This one was built in the 19th century by the son of France’s last king, Louis Philippe, whose collection of masterpieces (the second largest collection of antique paintings in France after the Louvre) is displayed in its opulent suites. 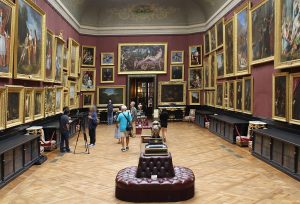 The Gallery of Paintings in the Chateau de Chantilly

David White’s trip was facilitated by London-based Byway Travel, which specialises in eco-friendly, ‘slow’ travel by train. The team at Byway works with clients to tailor trips to their interests, for example a focus on art, with recommendations on each city or area to be visited. They will also set up a small WhatsApp group to provide additional assistance.