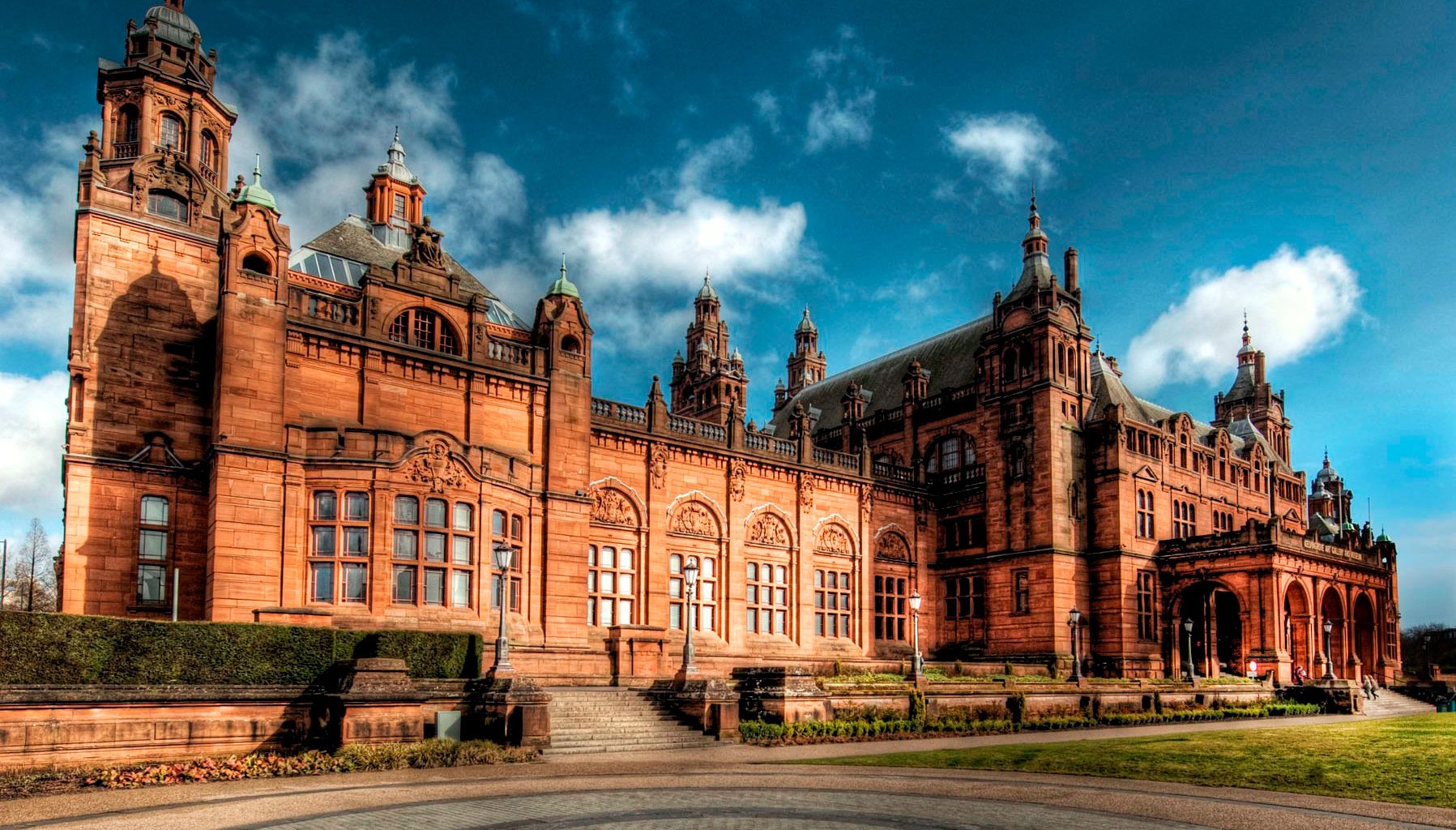 Glasgow’s status as an arts centre has grown over the last three decades since its year in the spotlight as the 1990 European City of Culture kick-started a shift from declining heavy industry to thriving creative industries. In artistic terms the change had already begun thanks to the New Glasgow Boys, a group of artists such as Peter Howson and Adrian Wiszniewski who studied at the Glasgow School of Art in the 1980s and achieved international success and renewed interest in figurative painting. The 2005 introduction of the biennial Glasgow International, or GI, further fostered a reputation for the city as a contemporary art capital, and Glasgow-based artists feature regularly among nominations for the coveted Turner Prize for contributions to British art, with no fewer than six of them winning. 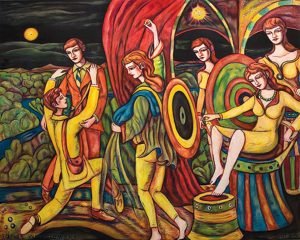 Work by Adrian Wiszniewski, one of the New Glasgow Boys

One of Scotland’s most popular free attractions, the Kelvingrove Art Gallery and Museum is a legacy of the 1901 Glasgow International Exhibition. Built of red sandstone in a Spanish Baroque style, it features over 20 themed galleries displaying 8,000 objects covering art from many movements and periods as well as natural history, arms and armour. The art collection includes outstanding European Old Masters, Dutch Renaissance painters (Rembrandt), French Impressionists (Monet, Renoir, Pissarro), Scottish Colourists and exponents of the Glasgow School. The most famous painting is Salvador Dali’s Christ of St John of the Cross, while van Gogh’s portrait of the Scottish doctor Alexander Reid, a dead ringer for Vincent, has fuelled the improbable theory that it is actually a self-portrait! There is also a large collection of 18th and 19th century European jewellery. 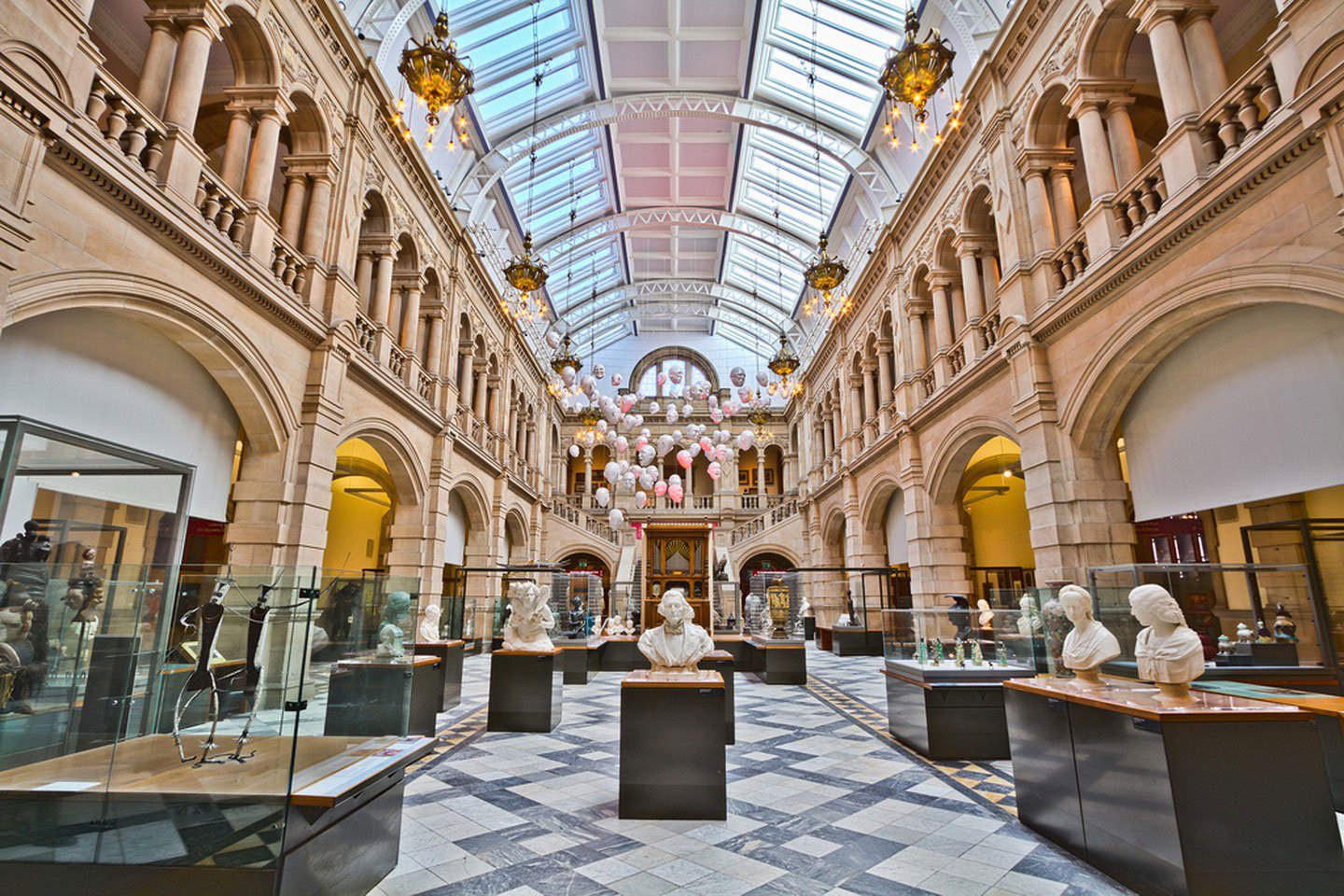 The Gallery of Modern Art (GoMA) occupies a neoclassical building in Royal Exchange Square in the heart of the city centre. Since 1996 it has housed the city’s contemporary art collection, which includes works by David Hockney, Sebastiao Salgado and Andy Warhol. The mirrored pediment on the exterior of the building, entitled Tympanum (1996), is by Niki de Saint Phalle, who also installed the mirrored vestibule to the gallery. 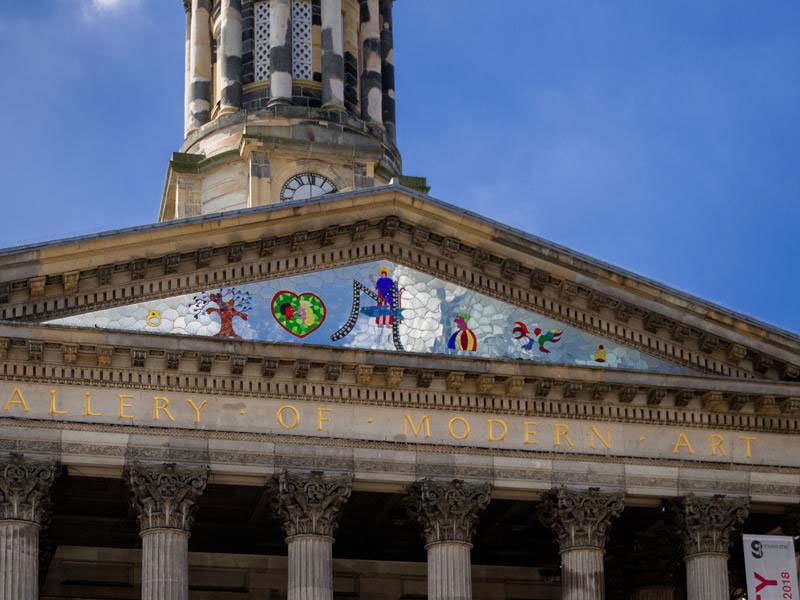 Niki de Saint Phalle’s ‘Tympanaeum’ on the facade of the Gallery of Modern Art, or GoMA

The equestrian statue of the Duke of Wellington in front the building usually wears a traffic cone hat, which the City has given up removing and which locals and visitors have come to regard as the city’s light-hearted attitude to authority. 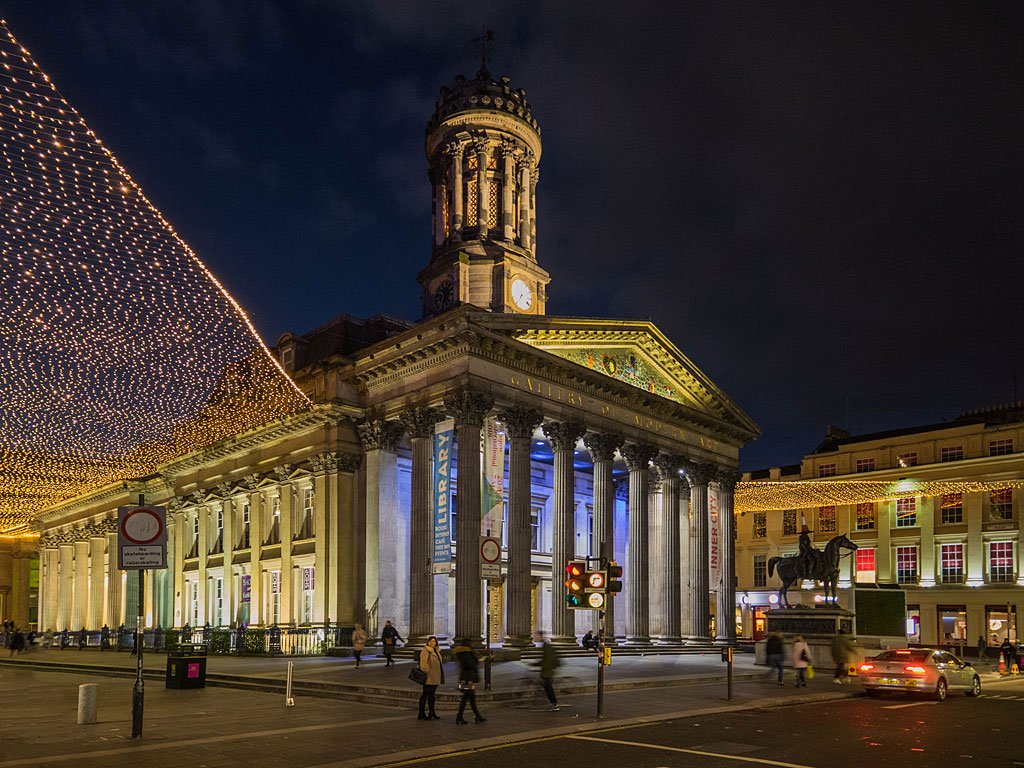 Gallery of Modern Art, or GoMA

Designed in 1901, opened in 1996. Charles Rennie Mackintosh’s iconic House for an Art Lover took almost a century to be realised. Glasgow’s most famous designer and architect, in collaboration with his wife and fellow designer Margaret Macdonald, entered a competition by a German magazine to design a “Haus Eines Kunstfreundes” or “Art-Lover’s House”. Although his design did not win (it was disqualified due to a technical breach of the rules), it was praised for its ‘absolutely original character, unlike anything else known’. 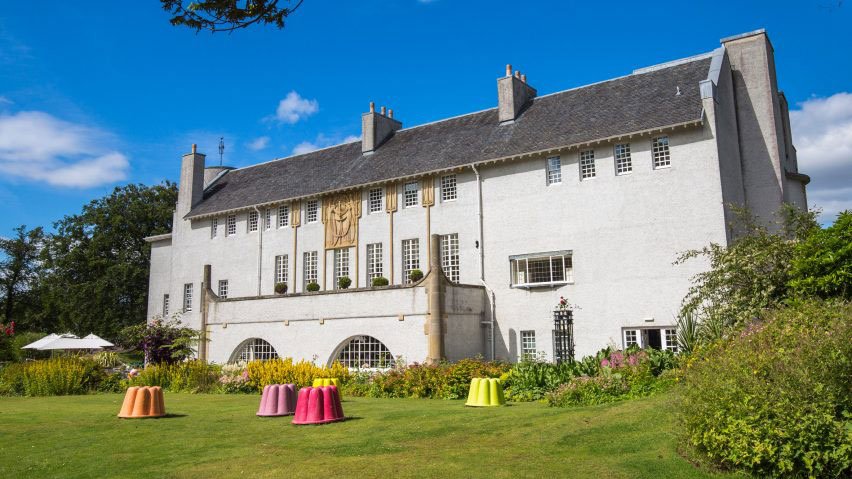 House for an Art Lover

Fast forward to 1989, when Graham Roxburgh, the Consulting Engineer responsible for restoring Mackintosh interiors in another building, had the idea to finally build the House for an Art Lover, locating it in Bellahouston Park. Today the house combines an art gallery and exhibition space, events venue, cafe and artists’ studios into a unique visitor attraction to stimulate public interest in art, design and architecture. 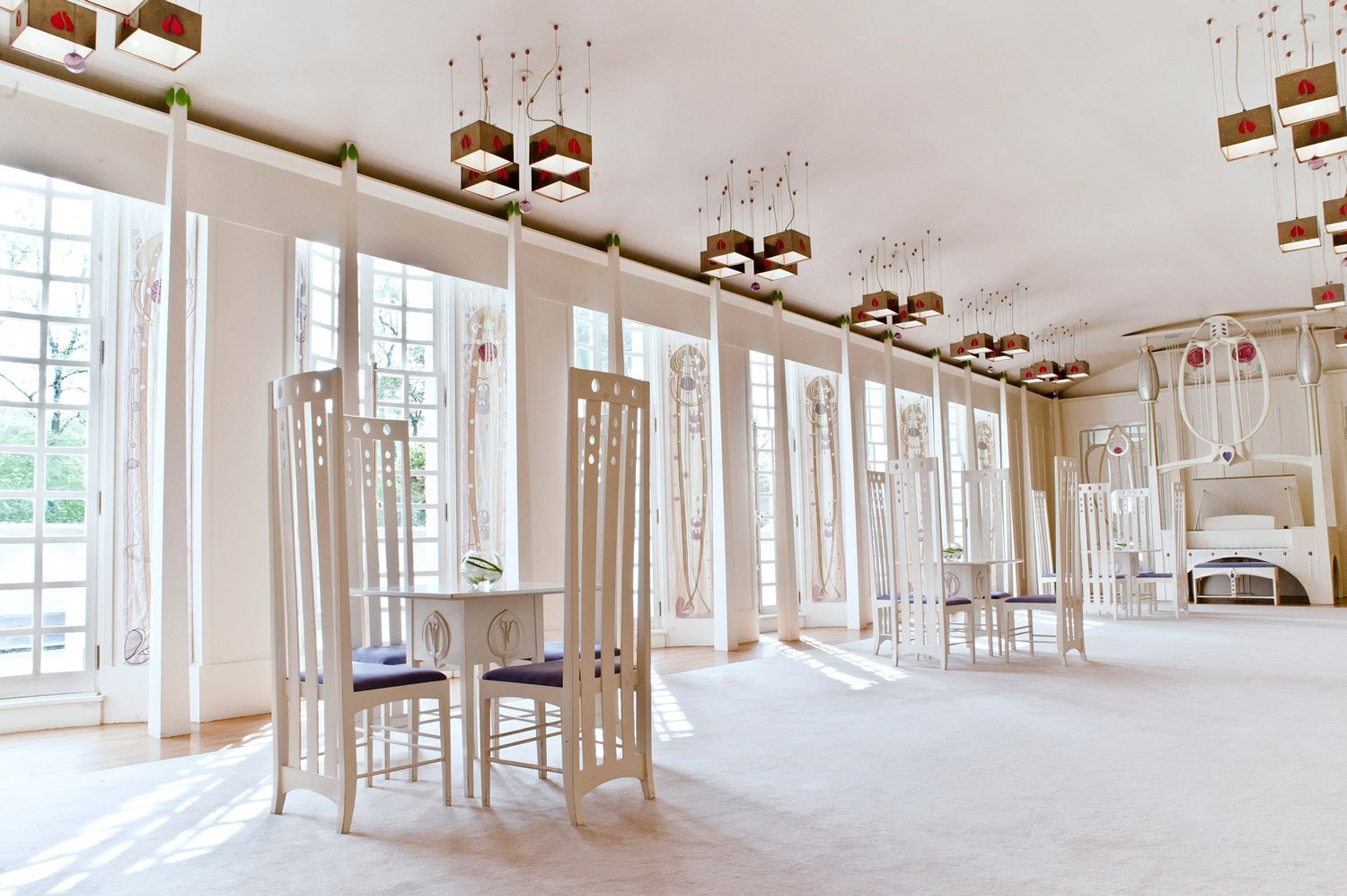 House for an Art Lover

Mackintosh’s legacy can also be appreciated in other venues in the city centre.

Opened in 2018 after an extensive restoration, Mackintosh at the Willow is the reincarnation of the original Willow Tea Rooms, which Charles Rennie Mackintosh designed in 1903 for a Miss Cranston, who owned a number of tearooms at a time when they were a popular alternative to pubs amid a growing temperance movement. 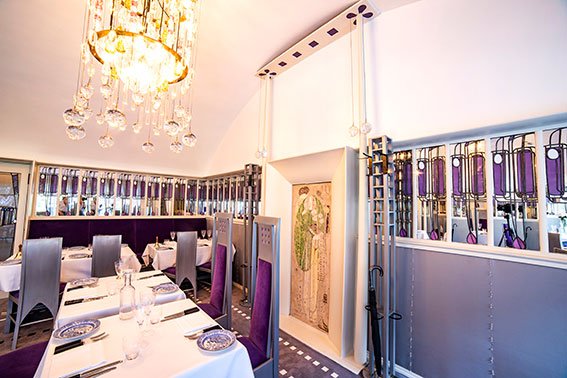 Mackintosh at the Willow

Visitors can now dine in the painstakingly recreated tearooms, thanks to a team of expert craftmakers whose metalwork, furniture, stained glass, fabrics and other contributions have won the project numerous awards. Recognised as the one of the finest examples in the world of a complete Art Nouveau scheme, they are the only surviving tea rooms where Mackintosh had complete design control over both the interior and exterior. There is also an interactive visitor centre.

Scotland’s oldest public museum and one of the world’s leading university museums, The Hunterian holds an unrivalled collection of the work of both Charles Rennie Mackintosh and Margaret Macdonald Mackintosh. The highlight of the collection is the Mackintosh House, the designer’s only surviving domestic interior in his native Glasgow. It features original interiors from the couple’s home (which has not survived), meticulously reassembled on three floors, enabling visitors to experience moving through a real home and see exactly what the Mackintoshes and their visitors would have seen between 1906 and 1914, right down to the Mackintosh-designed cutlery.

A room in the recreated Mackintosh House in The Hunterian

The Hunterian also has a major art collection, comprising over 900 paintings, 40,000 works on paper dating from 1450 to the present (the largest collection in Scotland), sculpture and applied and decorative art. Highlights include works by Rembrandt, Chardin, George Stubbs, James McNeill Whistler (the world’s largest collection, including paintings, drawings, watercolours, pastels, etchings, lithographs and artist’s materials and the contents of his studio) and the Glasgow Boys and Scottish Colourists groups.

Part of The Hunterian’s art collection

The Burrell Collection has reopened in its lovely Pollok Country Park setting after a six-year restoration. Amassed by the Glasgow-born shipping merchant Sir William Burrell (1861–1958), the 9,000 or so artworks, antiques and artefacts comprise one of the world’s greatest personal art collections. A believer in free education for all, Burrell gifted it to the City of Glasgow. 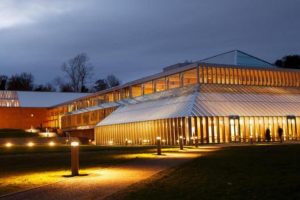 The restoration has created over a third more gallery space to show objects which have rarely if ever been on permanent display. Highlights cover 6,000 years of art history and include: one of the most significant collections of Chinese art in the UK; ancient artefacts such as Roman sculpture and Egyptian pottery; over 200 tapestries which rank among the finest in the world; and paintings by renowned 19th century French artists such as Manet, Cézanne, Degas, Gauguin, Boudin, Corot, Sisley and Daubigny. 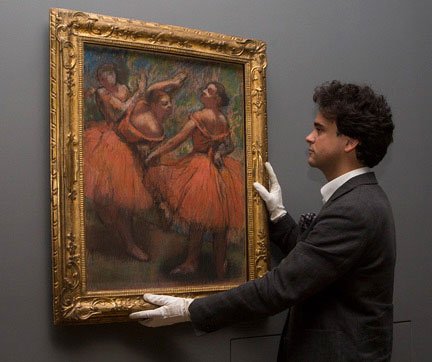