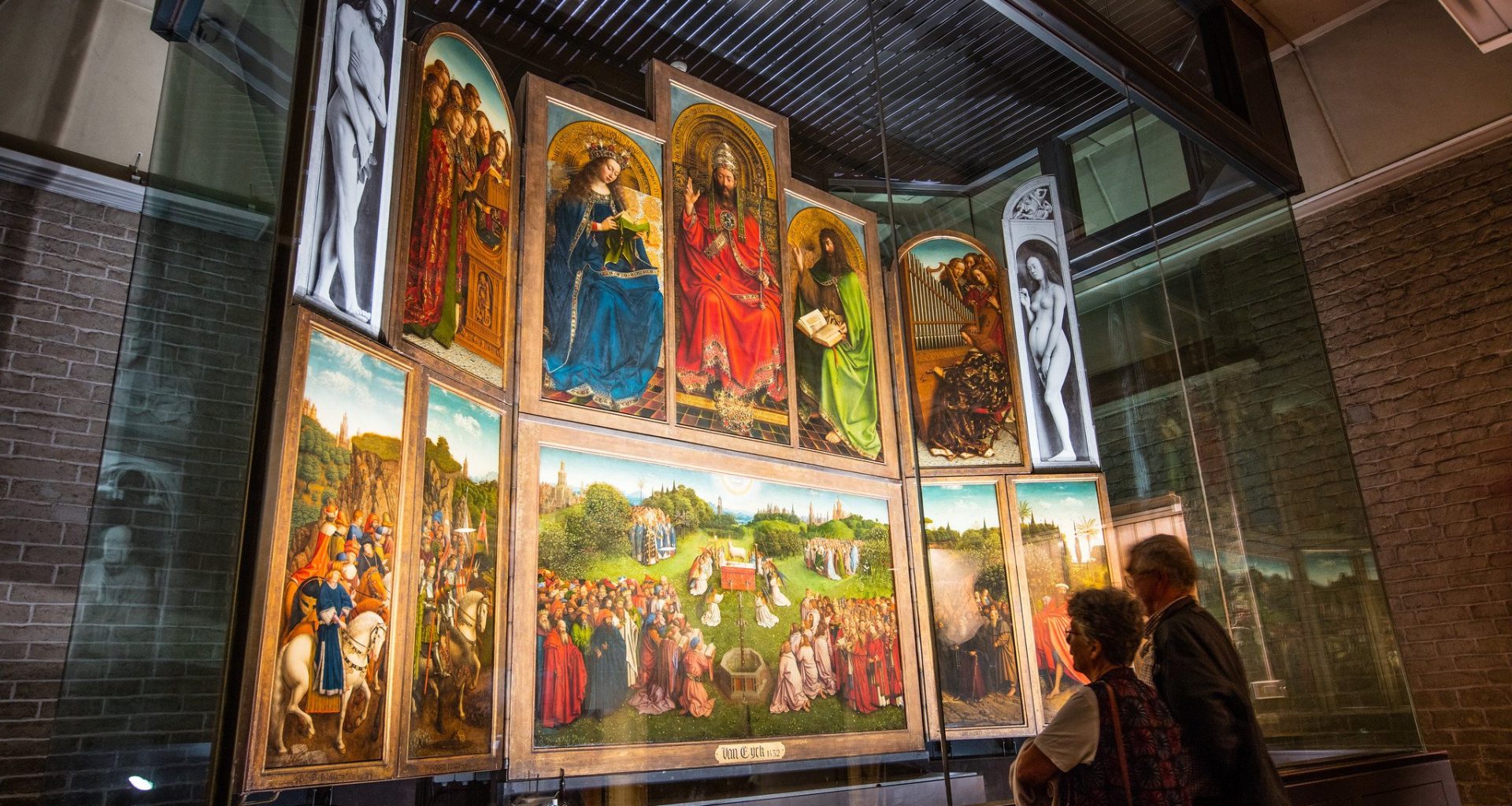 Jan Van Eyck (c.1390-1441) was Europe’s leading artist during his lifetime. So revolutionary was his work that after his death the myth arose that he invented oil painting. While this is untrue, we can nevertheless speak of ‘before’ and ‘after’ Van Eyck. Referring to Van Eyck’s impact on the art world, Professor Maximiliaan Martens of the Art History department at Gent University and Co-Curator of the largest exhibition ever staged of the artist’s work, said: “It seems as though a comet appears across the sky of 1430s European culture.” 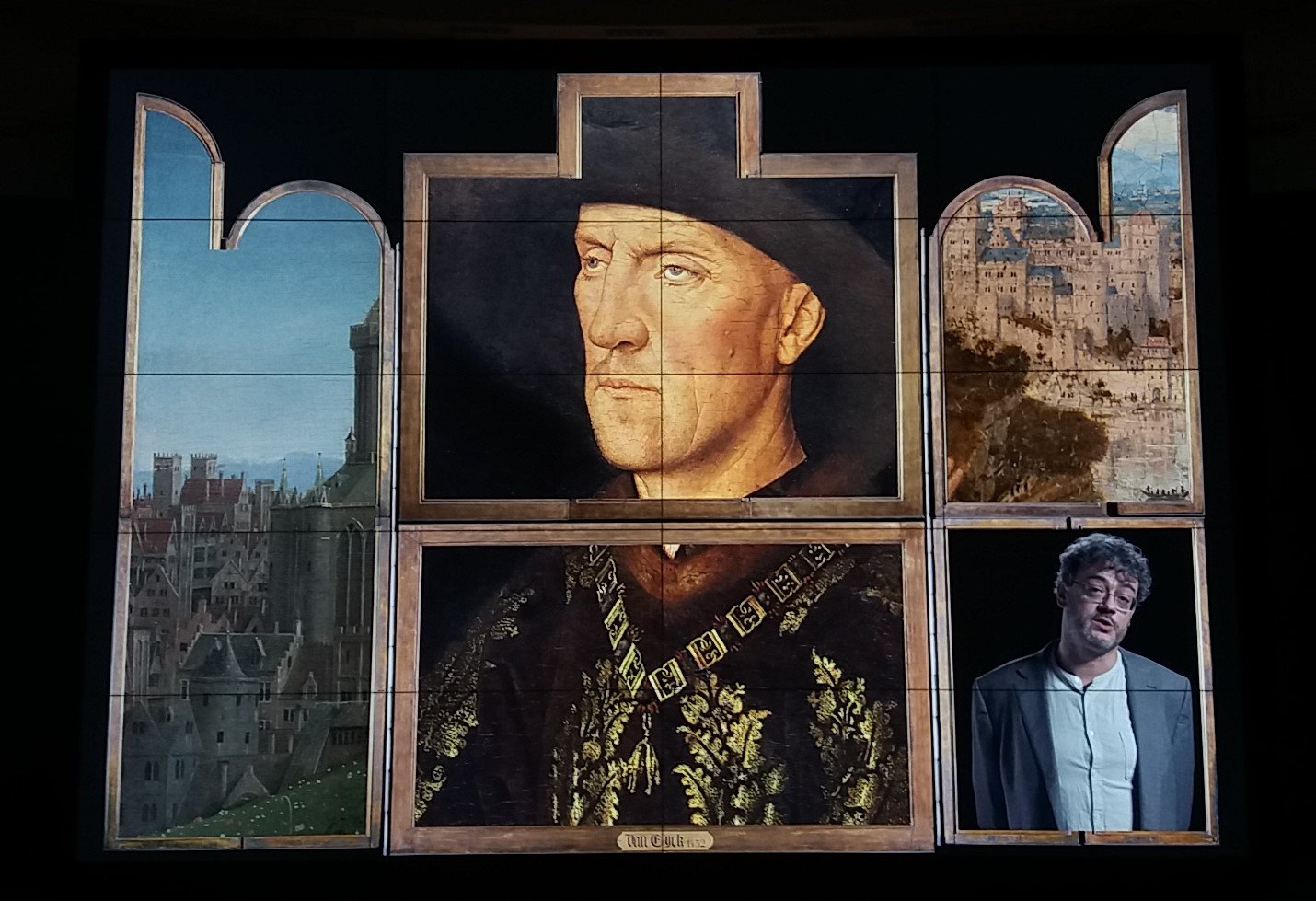 Arguably the most influential painting in history, the Gent Altarpiece is a 20-panel polyptych measuring over three metres by four metres. Painted on oak, it depicts Bible stories. What the Mona Lisa is to Paris, the altarpiece is to Gent. (The altarpiece is also at the heart of the film The Monuments Men, in which George Clooney “rescues” it from an Austrian salt mine after it was looted by the Nazis.) 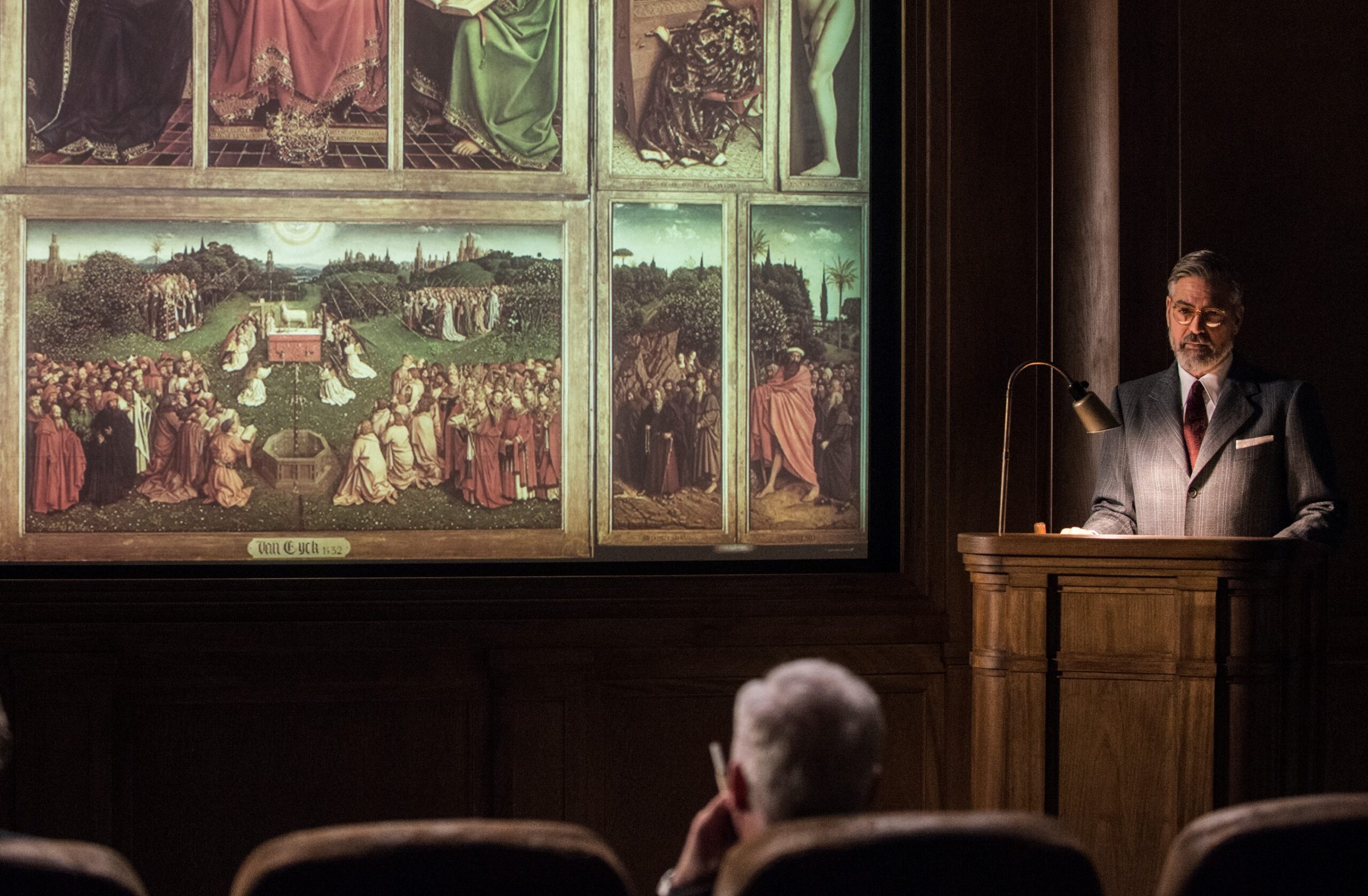 First unveiled on May 6, 1432 (coincidentally, Mr Clooney’s birthday – the date, that is, not the year), the altarpiece stems from a period when most believers were illiterate and visual representations of biblical stories were an important tool to engage church-goers. In this case, the contrast between the rather sombre outer panels, which fold out and back away from the viewer, and the colourful inner panels symbolises wordly reality making way for the majesty of heaven.

The actual creation of the altarpiece is something of a mystery. It is known that Jan’s brother Hubert, also an artist, was first commissioned to paint it and may or may not have been involved in the early stages before his death. Certainly, Jan completed it, while another brother, Lambert, as well as a sister (the entire Van Eyck family, including the father, were artists) may also have had a hand in it.

Restoration of the Gent Altarpiece began in 2012 in a specially created sound- and bullet-proof studio in the city’s Museum of Fine Arts (known by its Flemish acronym, MSK). During the process it was discovered that around 70 per cent of the work had been over-painted or varnished in subsequent years, meaning that initially the restorers were hardly looking at a Van Eyck at all. The restoration has also provided a new insight into Van Eyck’s process. 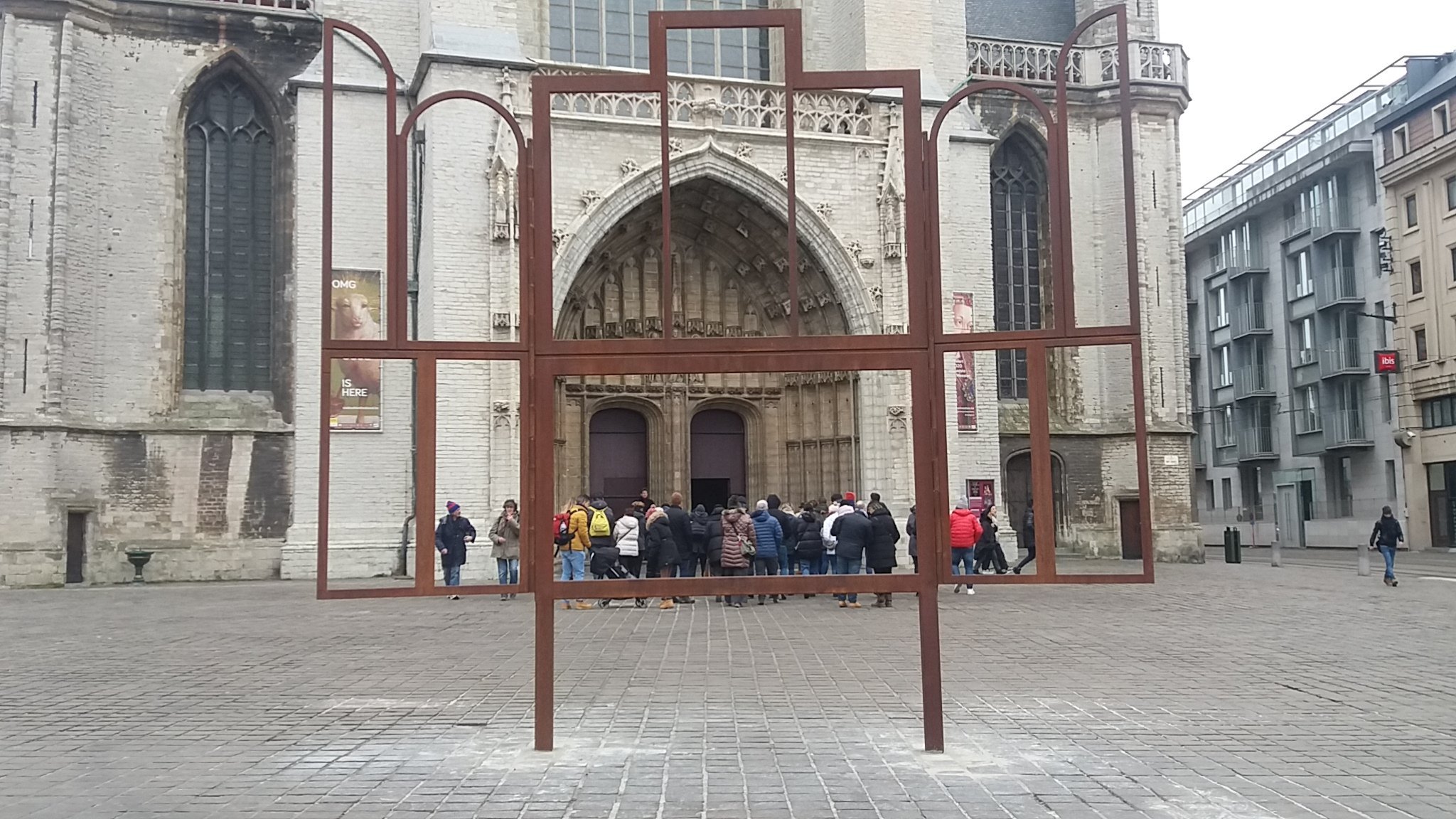 The partially restored altarpiece is now installed in a specially built visitor centre in St Bavo Cathedral, its original home, where it can be seen in its newly renovated glory, while augmented reality glasses enable visitors to view the work up close, time-travel back to Van Eyck’s era and even visit his studio. The altarpiece is closed twice a day so that visitors can view the art on the reverse side of the panels. After a few months, the top half will be replaced by a copy and the original removed for several more years’ of restoration, which is expected to be completed in 2024. However, It is questionable whether the entire original will ever be seen again. Two outer panels were stolen in 1934 and one of them, the Just Judges, has never been found.

While in the cathedral art-lovers will also want to seek out The Conversion of Saint Bavo (1623–1624), an altarpiece by Peter Paul Rubens, while Kris Martin’s Altar (2014), a metal replica of the altarpiece’s frame, stands in the square outside.

The Museum of Fine Arts (Museum voor Schone Kunsten, or MSK) has a permanent collection of about 9,000 works from the Middle Ages to the first half of the 20th century, including works by Old Masters such as Bosch, Rubens and Van Dyck and modernists such as Rodin, Ensor and Magritte. The spotlight is mainly on painting from the southern Netherlands but print art, sculpture and European painting are also well represented. There is also a very active programme of themed exhibitions. The collection may well have been larger. However, Gent was under French rule at the end of the 18th century, when many of the city’s art treasures were removed. Some are still in the Louvre.

Directly opposite MSK on the edge of Citadelpark is the Municipal Museum of Contemporary Art (Stedelijk Museum voor Actuele Kunst, or SMAK). Located in a former casino, its collection includes Pop Art, minimalism, conceptual art and CoBrA art, the avant-garde movement active mainly between 1948 and 1951 and named from the first initials of Copenhagen, Brussels and Amsterdam, the three cities from which its main proponents hailed. Be sure to look up to spot Jan Fabre’s golden sculpture The man who measures the clouds, modelled after his own body, but with the of his deceased brother.

Gent City Museum (Standmuseum Gent, or STAM) tells the story of the city from medieval metropolis to the present. This symbolised in its architecture, with a glass-fronted modern structure leading through to the beautifully restored 14th century Bijloke Abbey. Highlights include the oldest painted cityscape and an enormous aerial photograph spread out on a luminous glass floor. 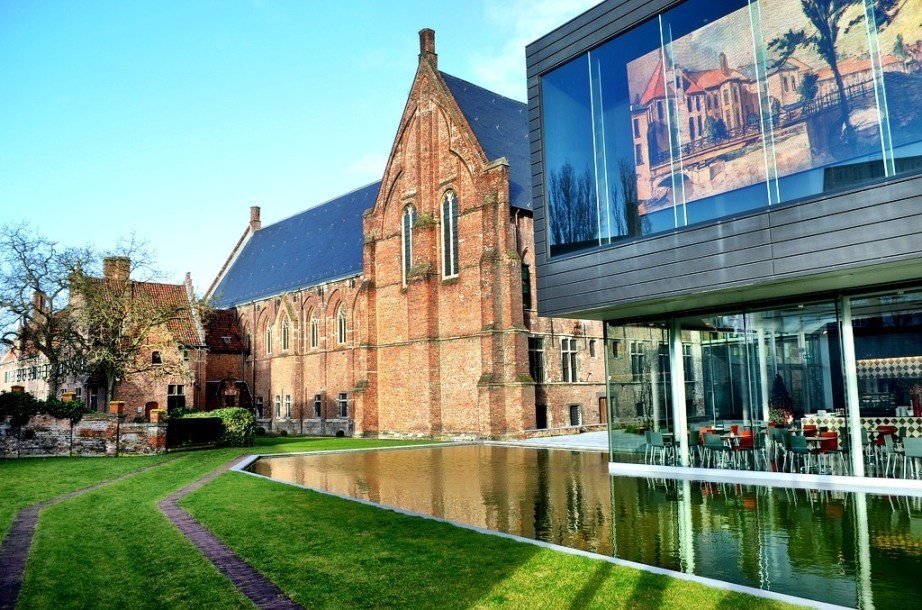 Located in a mid-18th century merchant’s house with a modern extension at the back (a department store in a former life), the Design Museum has a collection of over 20,000 items showing the development of applied arts and industrial and artistic design ranging from the foremost Belgian designer Henry van de Velde to the present. Antique and modern items are often displayed together to illustrate how the design of various types of objects and appliances has evolved over the years. PLEASE NOTE: The Design Museum is closed until 2024 for renovation and extension.

Describing itself as a ‘graffiti-friendly city’, Gent has commissioned international street artists to create Van Eyck-inspired murals on homes and businesses which applied to have their walls decorated. Also as part of the public art programme, an artist was commissioned to site 15 pairs of different sized Adam and Eve sculptures, fashioned after the outer panels of the Gent Altarpiece, around the city.

Even Belgium’s – for some – most popular product gets in on the Van Eyck act. The artisan chocolatier Nicolas Vanaise of Yuzu continues five generations of choco-passion in his family reaching back to his great-great-grandfather, who became a patissier in 1884. If there is such a thing as a chocolate artist, Nicolas is one. Yuzu has produced a special Van Eyck collection of hand-made chocolates with decorations inspired by jewellery and fabrics in the Gent Altarpiece and with flavours of some of the edible plants depicted in it, including quince and malted barley, coffee and hazelnut and cinnamon and orange blossom cream. To be savoured, not gulped!