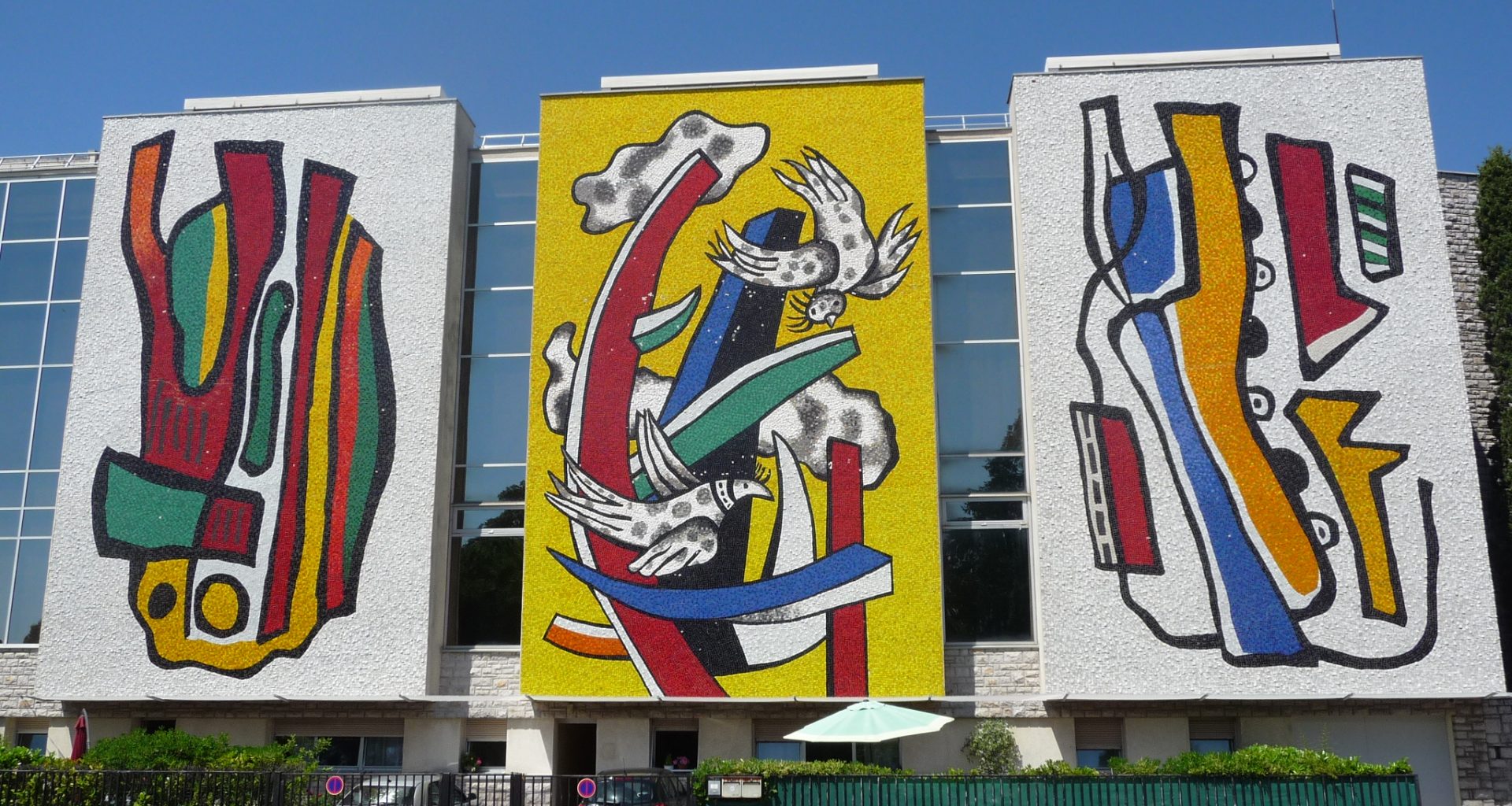 The French Riviera has drawn countless artists over the years.

Nice is second only to Paris for the most galleries and museums in France. This bustling city has the Riviera’s finest ocean-front boulevard, La Promenade des Anglais, and one of the best city views on the coast from La Colline du Chateau (Castle Hill). Take the elevator to the top and get set to go “Wow!” when the doors open to reveal the shimmering Mediterranean far below. The Vieille Ville (Old Town) is a fascinating cluster of narrow streets and alleys packed with cafes, restaurants, art galleries and craft shops.

Behind the trompe l’oeil facade of a 17th century villa, the Matisse Museum holds Henri Matisse’s entire personal collection, which he bequeathed to the city. It includes his famous cut-outs, often of laurels, leaves and fruits, as well as paintings, prints, illustrated books, photographs, engravings, sketches, tapestries, ceramics, stained glass windows and all the bronze sculptures he ever made – in all, a visual history of the artist’s work.

The Marc Chagall National Museum is housed in a modern building custom-built to display the world’s largest public collection of the artist’s works. At its heart is the Biblical Message cycle of 17 paintings illustrating Old Testament books. The artist himself decided the placement of the works on the walls. Russian-born, Chagall created works in virtually every artistic medium, including paintings, book illustrations, stained glass, stage sets, ceramic, tapestries and prints.

Located in a sumptuous 19th century building, the former residence of a Ukrainian princess, the Musee des Beaux-Arts (Fine Arts Museum) has a collection of paintings and sculptures spanning the 15th to the 20th century. Some of the rooms are among the largest of any museum on the French Riviera. Along with the main attraction, a collection by the Fauvist Raoul Dufy, the French School is well represented by the likes of Degas, Boudin and Sisley, while Impressionist and post-Impressionist artists include Bonnard, Vuillard and Van Dongen.

The Museum of Modern Art (known by its French acronym, MAMAC) specialises in the main avant-garde art movements in France and the United States since the mid-19th century. Highlights include: a room dedicated to Yves Klein, the leading figure of the French New Realist movement; a collection of American Pop Art by artists such as Roy Lichtenstein, Andy Warhol and Claes Oldenburg; and a large part of the French-American artist Niki de Saint Phalle’s personal collection, which she bequeathed to the city of Nice, including her rotund, larger than life figures.

The building itself is a major local landmark, with towers on all four corners linked by glassed-in walkways leading visitors through the galleries on a circumference of the museum on each level. On the roof a series of arched bridges links viewing terraces with spectacular panoramas of the city.

Fifteeen kilometres or so along the coast from Nice, Antibes is the only fortified town on the French Riviera. Famous for its ramparts, it has been repeatedly depicted by painters over the years and you can see it through the eyes of artists such as Monet, Picasso and Boudin by following The Painters’ Trail marked by illustrated lecterns standing on the very sites where the originals were painted.

Here the Picasso Museum perches over the Mediterranean. After spending the WWII years in Paris, Picasso moved to Antibes in 1946. Accepting an invitation from the city’s mayor to use a room in a former chateau of the Grimaldi family (the rulers of Monaco), Picasso set to work painting on whatever materials were at hand in the austere, post-war years, including plywood, recycled sail canvas and concrete. Since the other museums dedicated to him – in Barcelona, Malaga and Paris – have no works made on these materials, the resulting collection is unique.

Picasso subsequently donated the complete works from this period to the city of Antibes, and the chateau became the first national museum in France dedicated to a living artist. The works, which may only be shown here, are exhibited in rotation, so that almost the entire collection is shown over the course of a year. On the terrace overlooking the sea are sculptures by Miro and others.

A short distance inland the town of Vallauris is also closely associated with Picasso. This is where he first learned ceramic techniques in the Madoura workshop of Georges and Suzanne Ramié between 1948 to 1955. Breaking down the barriers between painting, sculpture and ceramics, Picasso produced more than 4,000 works over the next 20 years. Many of them are on display in the Magnelli Museum and the Ceramics Museum, both housed in a former Renaissance priory.

This is also home to the Picasso War and Peace Museum, named after the two remarkable murals which are permanently installed in the former chapel, turning it into a kind of ‘peace temple’. War and Peace was part of the 1950s movement rediscovering sacred art, when Matisse was finishing The Chapel of the Rosary in Vence and Chagall was working on his Biblical Message series in Nice. A far cry from a busy gallery, it is difficult to sit in the quiet intimacy of the tiny museum, literally surrounded by a cry for peace from the master’s soul, and remain unmoved.

In the marketplace in front of the museum stands the bronze statue L’Homme au Mouton (Man with a sheep, 1943), which Picasso gifted to the city of Vallauris, his first sculpture to be installed in a public place.

Pierre Bonnard is perhaps best known as a founder member of a group of post-Impressionist avant-garde artists known as Les Nabis. (‘Nabi’ means ‘prophet’ in Hebrew and Arabic.) Spanning the 19th and 20th centuries, the movement set out to revitalise painting, paving the way for the development of abstract art.

Occupying a former hotel in Le Cannet, the Bonnard Museum has a permanent collection of paintings, sculptures, drawings and photographs along with other pieces on loan from museums and private collections. A series of exhibitions explores different aspects of Bonnard’s work. His compositions are typically sunlit interiors and gardens populated with friends and family members. He also painted self-portraits, landscapes, street scenes and still lifes, usually of flowers and fruit. Bonnard owned a small house in Le Cannet and died there in 1947.

With its medieval streets dotted with galleries and artist studios, Mougins has been home to Fernard Leger, Jean Cocteau, Man Ray and Pablo Picasso, who died there in 1973.

With some 700 works spanning 5,000 years, the Museum of Classical Art shows how modern artists have been influenced by ancient art. This is shown by the juxtaposition of ancient and modern exhibits, such as a Roman Venus next to Salvador Dalí’s surrealist Venus de Milo, a blue Venus cast by Yves Klein and Andy Warhol’s The Birth of Venus or Egyptian tomb reliefs and a painted sarcophagus displayed alongside Alexander Calder’s colourful pyramids and a sphinx by Jean Cocteau.

Other exhibits demonstrate how ancient monuments, coins, mosaics, paintings and sculptures are reflected in work by a virtual roll-call of modern greats, from Matisse, Dufy, Cezanne, Rodin, Cocteau, Hirst and Chagall to Modigliani, Giacometti, Toulouse-Lautrec, Moore and Braque. Outside two cast iron figures by Anthony Gormley stand guard over the road leading up to the village.

Unlike other artists who have museums dedicated to them on the French Riveria, Fernand Leger never actually lived in Biot, although he bought a villa there, but died soon afterwards. His wife Nadia decided to create a museum on the property, and the Fernand Leger National Museum was inaugurated in 1960.

The vast murals in primary colours covering the outside walls demonstrate why Leger is considered a forerunner of Pop Art, while inside the spacious, white-walled galleries make his works pop out. With almost 350 of the artist’s original paintings, drawings, oils, stained glass windows and mosaics, it is the largest collection of Leger’s works in the world.

In its walled Old Town, Vence has preserved amazing souvenirs of its rich history: Roman ruins, ramparts, watchtowers, the remains of the Bishop’s Palace, the chateau of the Lords of Villeneuve, squares, fountains and the treasures in its cathedral. A long-time refuge for artists, Vence has been depicted by the likes of Soutine, Dubuffet and Dufy. In 1943 Henri Matisse left Nice to escape the bombing and lived in the villa Le Reve (The Dream) until 1949, painting some of his finest works there. The house can be visited and it is even possible to paint in one of the studios.

It was also in Vence that Matisse dedicated three years to the design the Chapelle du Rosaire (Chapel of the Rosary), which he created to honour the Dominican sisters who treated him during an illness. Matisse worked on the plans for the building and all aspects of its decoration, including stained glass windows, ceramics and furniture – the first time an artist designed an entire building. Although not a religious person, he considered it his masterpiece.

Utrillo, Derain, Soutine, Signac, Modigliani and Matisse were all bewitched by the beauty of Saint-Paul as were other artists, writers and showbiz stars. Today the town is still an artists’ mecca, albeit the many galleries have a ritzy, glitzy air about them.

On an overlooking hill the Maeght Foundation has hundreds of outdoor sculptures by the likes of Henry Moore, Alexander Calder, Jean Arp, Joan Miro and Alberto Giacometti. This private collection was a true collaboration, many of the artists working with the Maeght family (Aimé Maeght was a French art dealer, collector and publisher) and the Catalan architect Josep Lluis Sert to create site-specific works for the museum building and grounds. 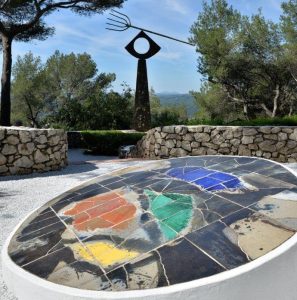 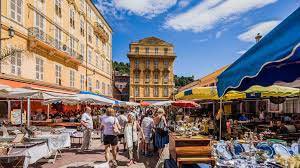 In Nice’s atmospheric Vieille Ville (Old Town), locals and visitors mingle in the colourful hustle and bustle of the daily outdoor markets in the Cours Saleya, which alternate between fruits, vegetables and flowers and antiques and second hand clothes.

The finest ocean-front boulevard on the Riviera, La Promenade des Anglais in Nice is named in honour of the vacationing English aristocracy who paid for its construction in the 19th century.