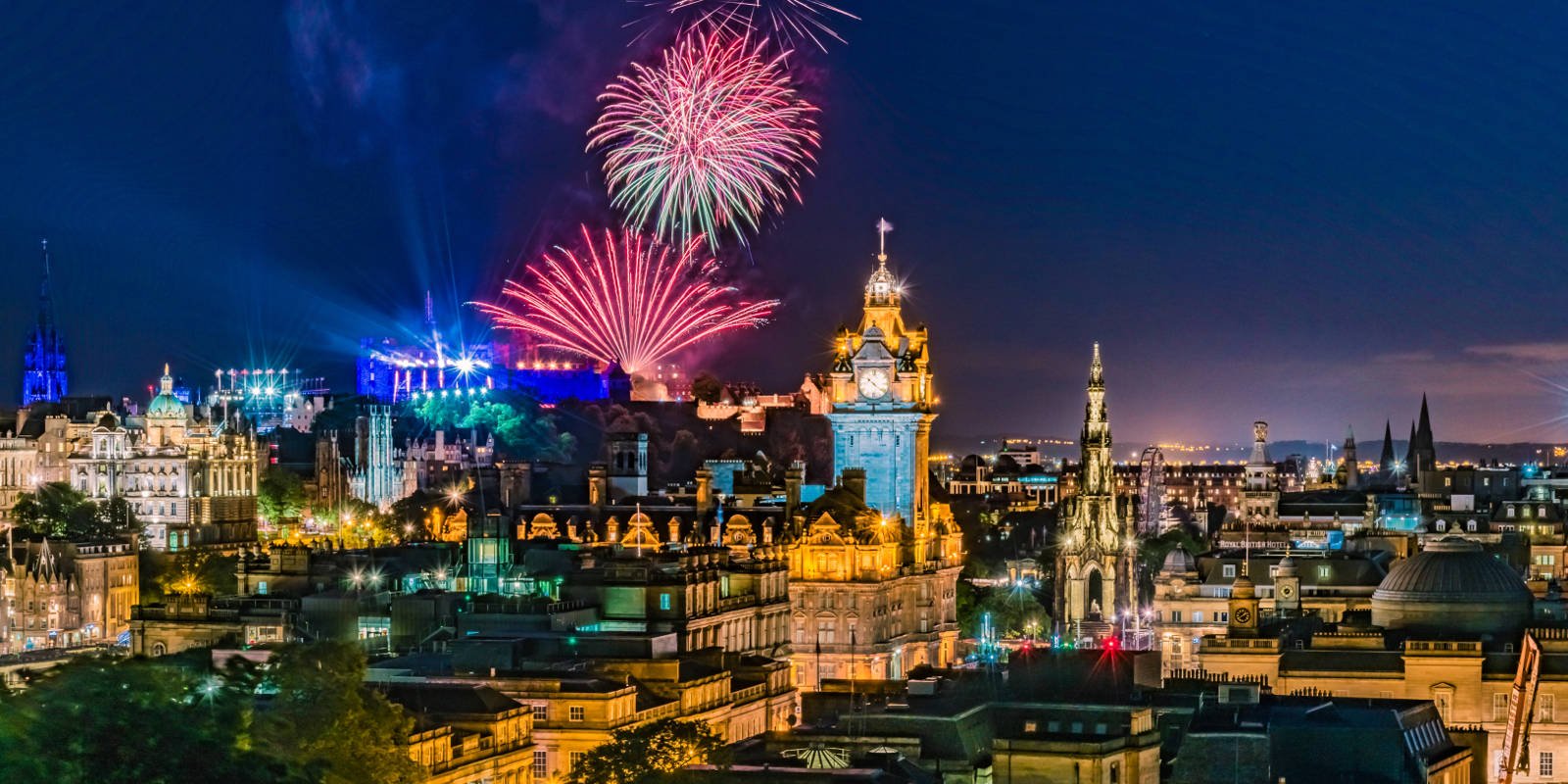 Edinburgh is home to the world’s largest arts festival, a three-week summer jamboree of music, theatre, dance, visual art and comedy which draws top talent and plays out in hundreds of permanent and temporary venues throughout the city. It is said that Edinburgh has more art museums and independent galleries per head of the population than London and it seems that hardly a month goes by without a new space popping up or an established venue being refurbished, while museum curators and gallery owners strive to strike a balance between presenting established artists and nurturing emerging talent. 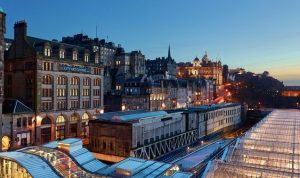 The Scottish capital’s – and, indeed, the country’s – top four art galleries are all operated by National Galleries Scotland in its role as the caretaker of the national collection. All four galleries occupy beautiful buildings either purpose-built or repurposed from their former uses as a hospital or orphanage.

Occupying two substantial early 1800s buildings which face each other across a busy road to the west of the city centre, the Scottish National Gallery of Modern Art houses the collection of modern and contemporary art dating from about 1900 to the present. Both are set in extensive parkland dotted with sculpture by artists such as Barbara Hepworth and Henry Moore.

The lawn in front of Modern One features Charles Jencks’ Landform, a dramatic work comprising a stepped, serpentine grass mound reflected in crescent-shaped pools of water, while mounted on the facade of the neo-classical building in large neon letters is Martin Creed’s Work No. 975, EVERYTHING IS GOING TO BE ALRIGHT. 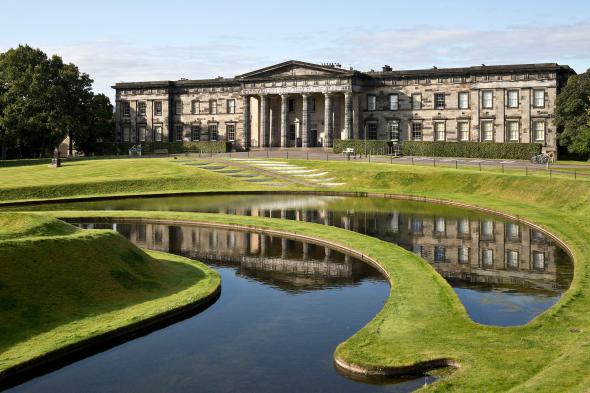 Charles Jencks’ ‘Landform’ in front of Modern One

The displays in Modern One change on a regular basis and are accompanied by a series of special exhibitions. The collection ranges from early 20th century European art (Derain, Matisse, Picasso, Bonnard, Cubism, the Scottish Colourists, Expressionism, modern British) to international post-war work (Bacon, Hockney, Warhol, Eardley) to more recent artists such as Gormley, Emin, Bourgeois, Mapplethorpe and Hirst.
Modern Two is home to a changing programme of world class exhibitions and displays drawn from the collection. On permanent display is a recreation of Sir Eduardo’s Paolozzi’s studio as well as his towering, robot-like sculpture, Vulcan. Modern Two is also home to a collection of Surrealism, including works by Dali, Magritte and Giacometti.

Near the city centre in the New Town, a UNESCO World Heritage Site completed around 1850 to expand the city beyond its cramped, medieval Old Town, the Scottish National Portrait Gallery is one of Edinburgh’s most remarkable buildings – a neo-Gothic, red sandstone palace opened in 1889 as the world’s first purpose-built portrait gallery. Both inside and out, an elaborate decorative scheme with glittering friezes, extensive murals and many sculptural embellishments make it a special experience. Statues of poets, monarchs and statesmen watch over Queen Street, while William (“Braveheart”) Wallace and warrior king Robert the Bruce guard the entrance. 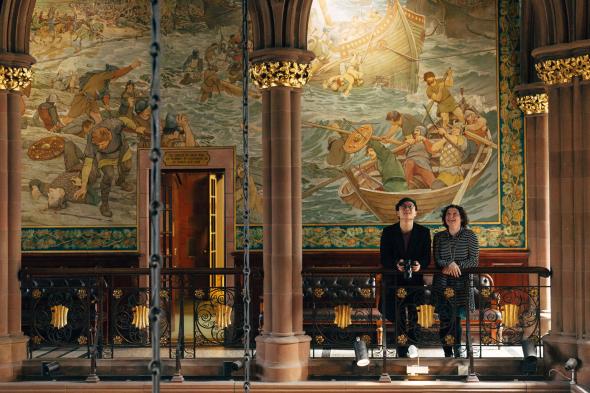 A kind of shrine to Scotland’s heroes and heroines, with a policy of commissioning portraits of living Scots by contemporary artists, the gallery explores different aspects of the country’s story and people through images of famous historical figures such as Robert Burns, Sir Walter Scott and Prince Charles Edward (“Bonnie Prince Charlie”) Stuart to more recent pioneers in science, sport and the arts, including singer/songwriter Emeli Sandé, comedian Billy Connolly and actor Tilda Swinton. The gallery also houses the National Photography Collection. 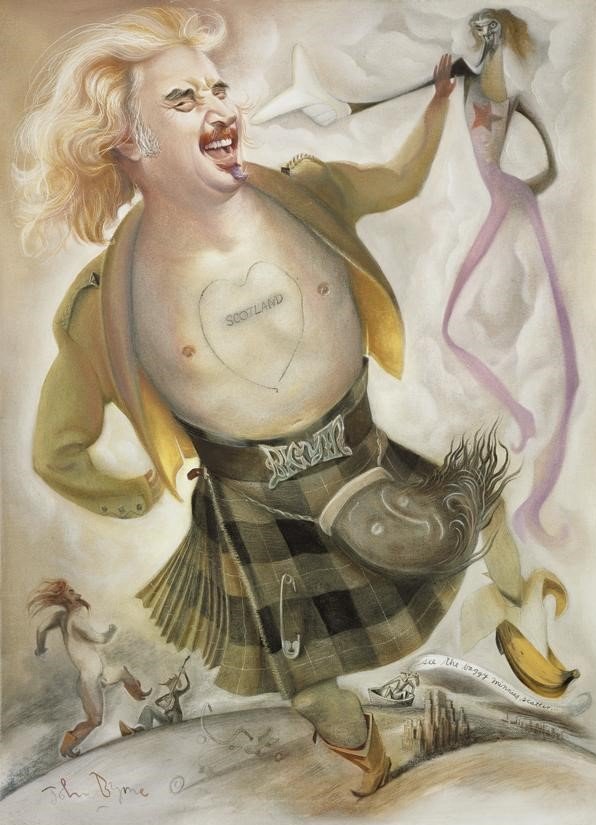 In the very centre of the city in beautiful Princes Street Gardens, the Scottish National Gallery, one of Scotland’s top free visitor attractions, houses the national collection of fine art from the early Renaissance to the end of the late 19th century. Displayed in a peaceful setting are masterpieces by Raphael, Velazquez, Vermeer, Monet, Cezanne, Van Gogh and many more. For a nation of Scotland’s size, the collection is regarded as one of the best in the world.

The most comprehensive part of the collection covers the history of Scottish painting. All the major names are represented in depth, including Ramsay, Wilkie, McTaggart and Raeburn, whose much loved The Reverend Robert Walker Skating on Duddingston Loch, better known as the “Skating Minister”, is rivalled for iconic status only by its gallery mate, Sir Edwin Landseer’s regal stag, Monarch of the Glen. 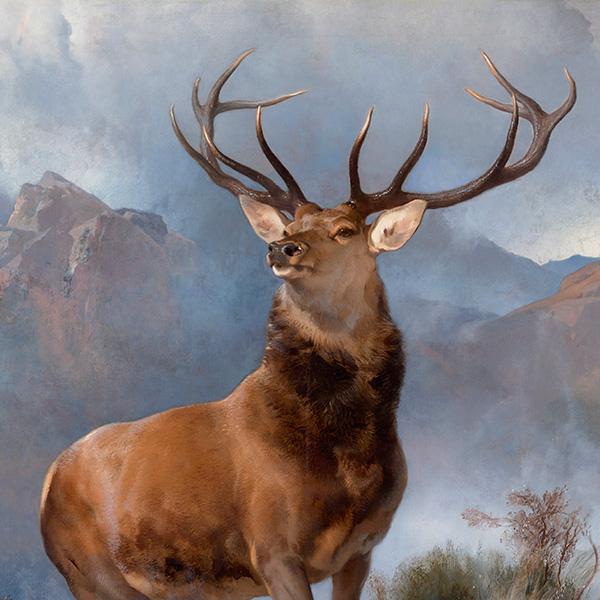 Virtually back to back with the Scottish National Gallery (and also designed by William Henry Playfair in the form of an ancient Greek temple) is the Royal Scottish Academy. The RSA was founded in 1826 by a group of eminent artists with a range of aims, including presenting an annual exhibition open to all artists of merit, offering fine art instruction at no charge and supporting less fortunate artists through charitable funds.

The first Annual Exhibition was held in 1827, making it one of the longest running shows in the world, and the organisation moved into its purpose-built galleries in 1855. Honorary Academicians have included Rodin, Degas and today Anselm Keifer. The RSA runs a year-round programme of exhibitions and many of its members teach in Scotland’s leading cultural institutions.

Across from the southern entrance to Waverley Station, Edinburgh’s main train terminal (where emerging passengers are exhilarated by their first view of Edinburgh Castle), the City Art Centre is home to the city’s collection of Scottish art dating from the 17th century to the present day. Including historic and modern painting and photography and contemporary art and craft, the works are displayed on a rotating basis along with a series of special exhibitions. 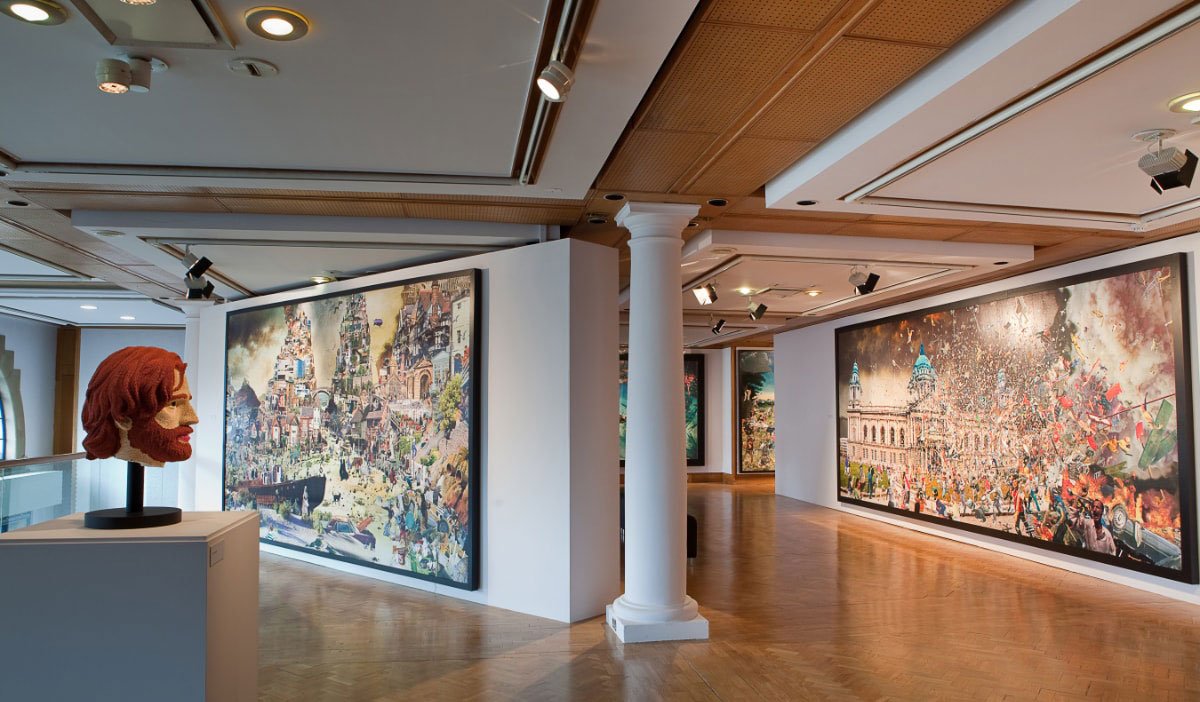 Most of Scotland’s leading artists are represented, including the group known as the Scottish Colourists (Peploe, Fergusson, Cadell, Hunter) and an equally important group, the Glasgow Boys (E.A. Hornel, George Henry, John Lavery). The collection records many important moments in Edinburgh’s history, as in John Wilson Ewbank’s monumental Entry of George IV into Edinburgh from the Calton Hill, 1822, with extraordinary detail in this crowded scene, and also documents the changing face of the city.

Across the street from the City Art Centre, the Fruitmarket Gallery reopened in summer 2021 after undergoing a multi-million pound redevelopment which expanded its existing galleries and embraced a large adjacent warehouse (and former nightclub), doubling the footprint of the building. The first project and renovation of its kind to open in the UK since the pandemic, it retained original industrial features such as steel frames, brick-lined walls and rough wood. 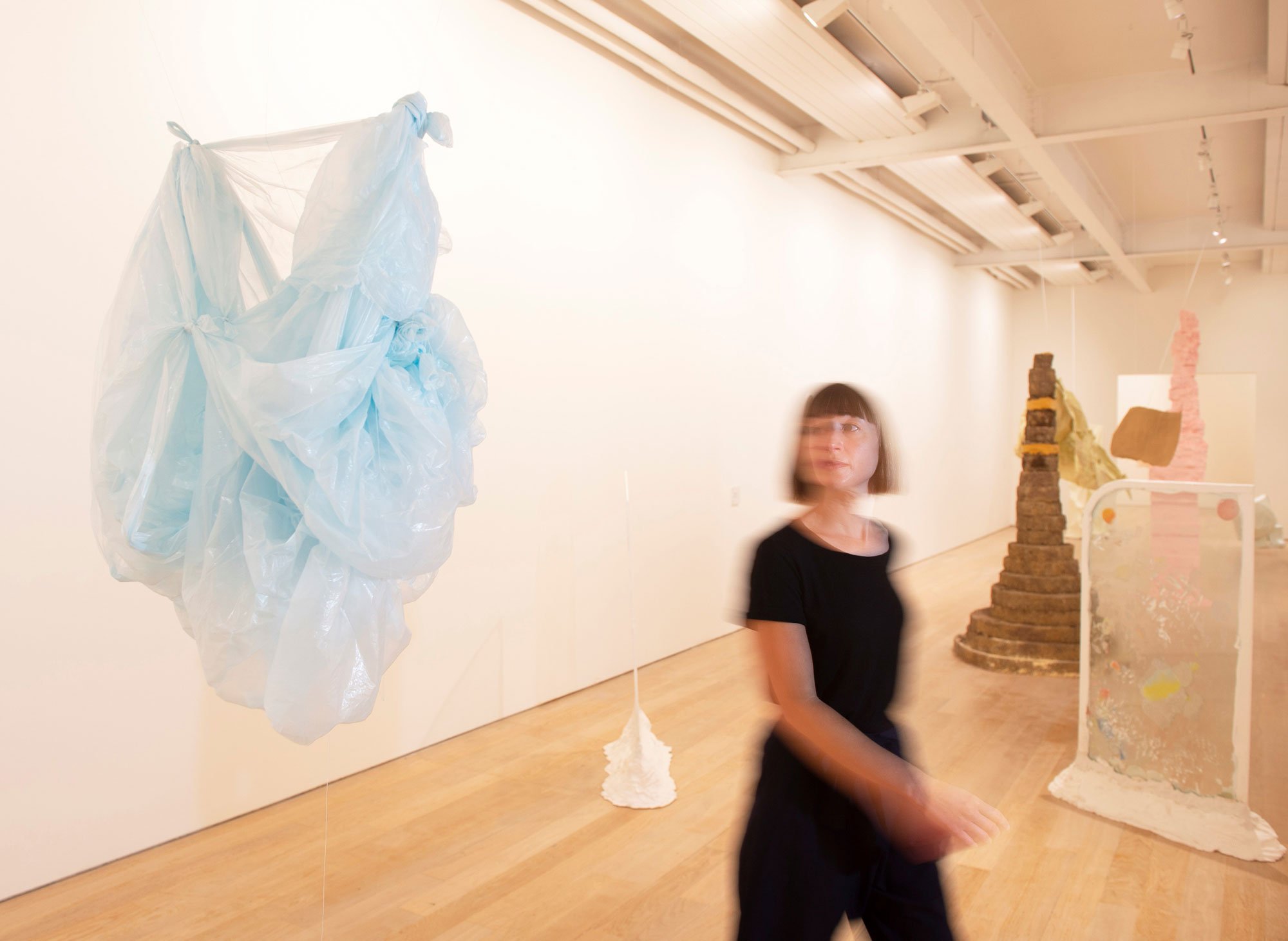 A former fruit and vegetable market converted into a gallery in the 1970s, the Fruitmarket is dedicated to Scottish and international contemporary art. The inaugural exhibition at the new gallery featured over 30 works by the Turner Prize-nominated Scottish artist Karla Black, including new commissions responding to the refurbished space. It was the first Scottish cultural institution to be included on the Bloomberg Connects cultural app, joining over 20 others around the world.

Enjoying the most spectacular view of Edinburgh from an art gallery is the Collective Gallery in the former City Observatory and City Dome on Calton Hill, which offers sweeping 360° panoramas of the city and the River Forth estuary on which it stands. The Collective provides emerging contemporary artists with the opportunity to make new work. 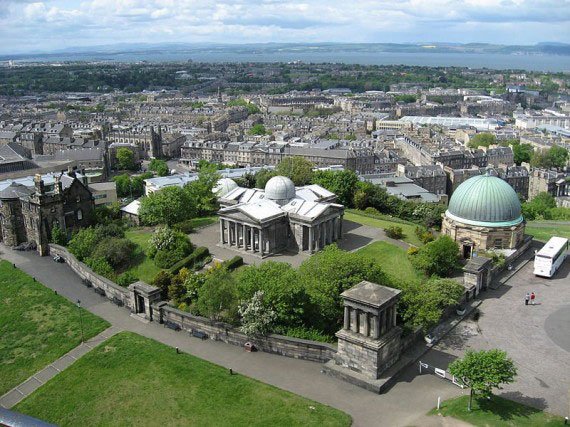 The Collective Gallery on Calton Hill

Dovecot Studios is a world renowned tapestry studio producing exceptional hand-woven tapestries and gun-tufted rugs. The cavernous main hall stems from its previous incarnation as municipal swimming baths where generations of locals learned to swim. An extensive redevelopment was completed in 2008.

The studios collaborate with leading artists to create tapestry interpretations of their work. Over the years they have included Eduardo Paolozzi, Peter Blake, David Hockney, Graham Sutherland and Henry Moore as well as Scottish artist Elizabeth Blackadder, Robin Philipson, John Bellany, Barbara Rae and others. 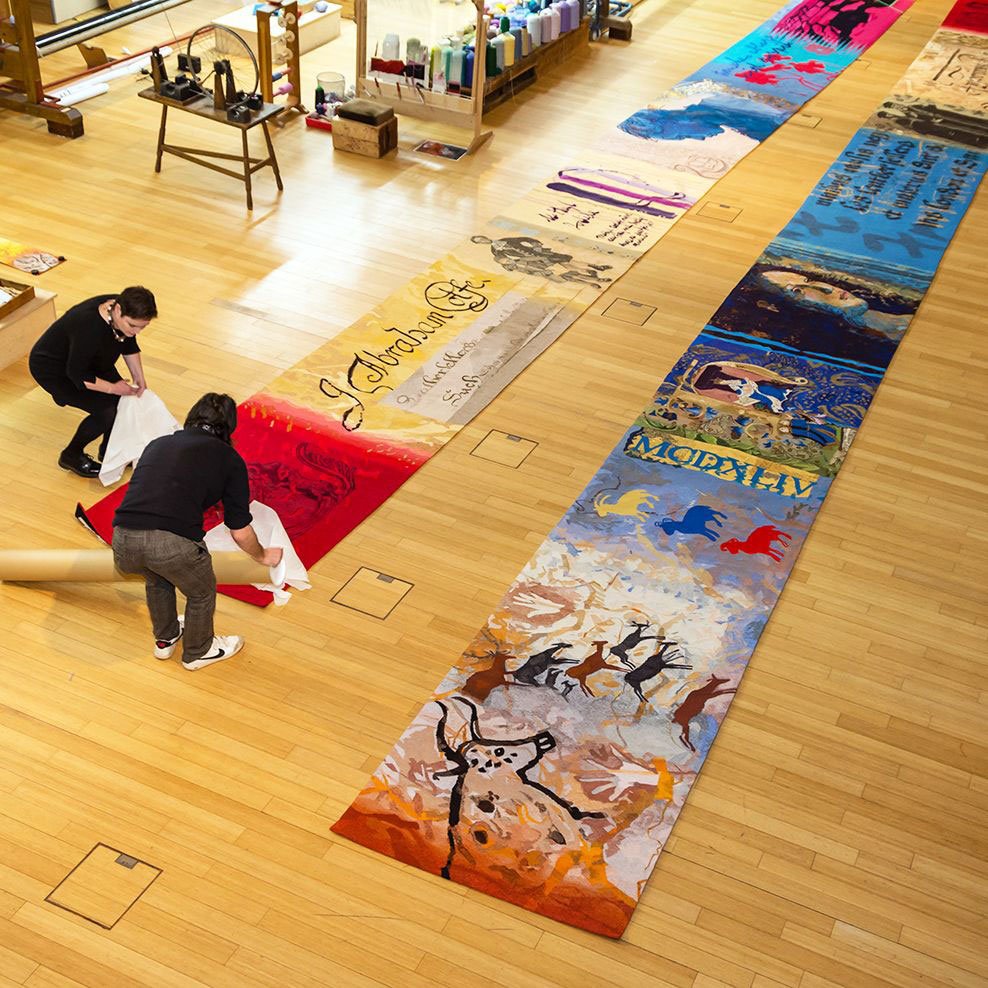 Completed tapestries can be seen in places such as the British Library in London (R.B. Kitaj’s If Not, Not, at seven metres square the studio’s biggest tapestry to date), Coventry Cathedral and Kings College Chapel Cambridge. There is an ongoing exhibition programme, while visitors can watch weavers at work from a viewing balcony.

Housed in the beautiful Castle Mills heritage building, a former rubber factory and brewery complex, which won architecture awards for reuse, Edinburgh Printmakers offers facilities for artists using both traditional and digital processes. Both in-studio and visiting artists’ work can be seen in a series of themed exhibitions. 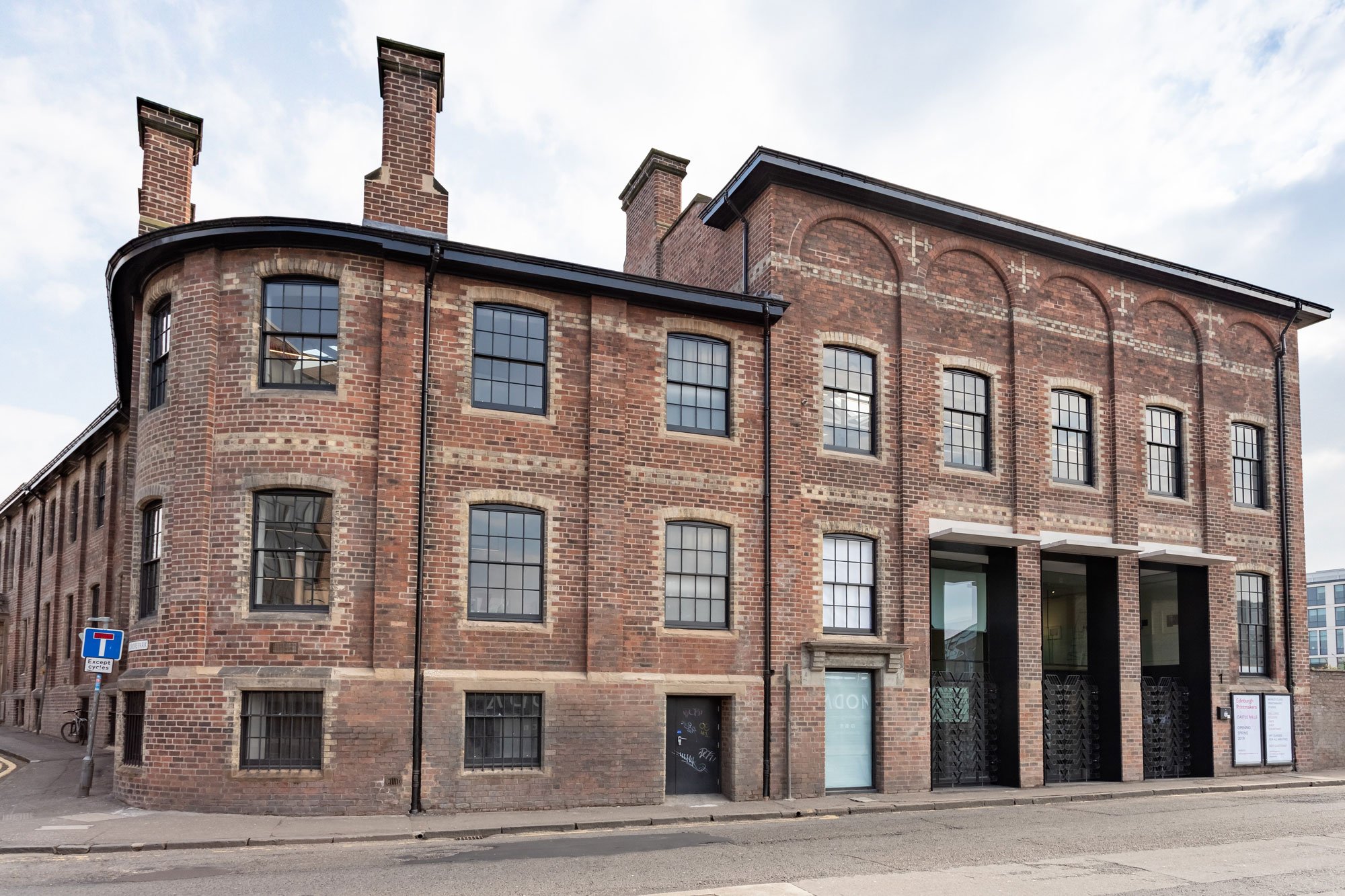 Inverleith House is remarkable as much for its setting as for what is exhibited inside it. Crowning the hill around which the Royal Botanic Garden Edinburgh is laid out (it’s the second oldest in Britain after Oxford’s), the lawn in front of it offers a view of the Edinburgh cityscape you won’t find anywhere else. 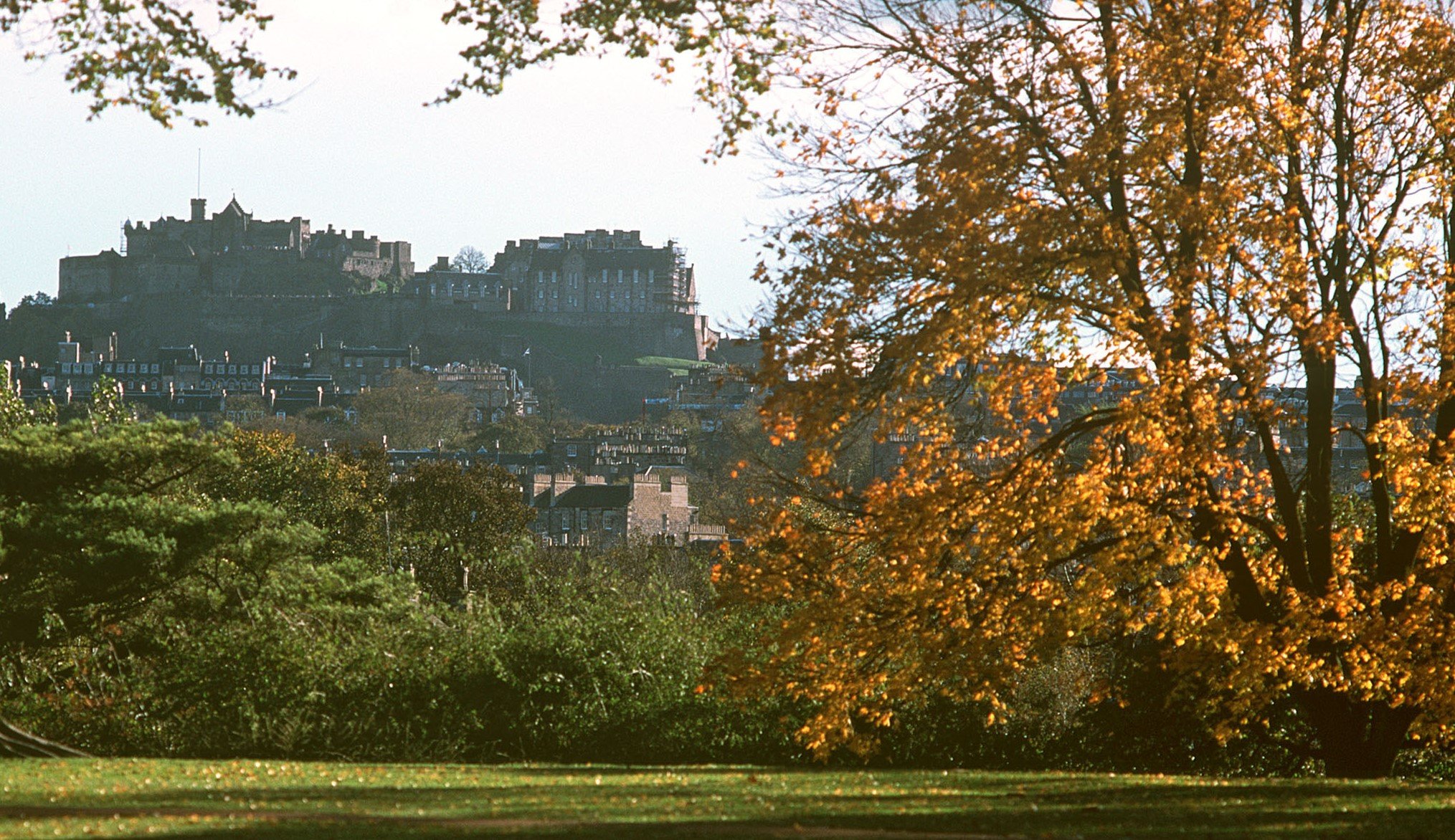 The 18th century building was the original base of the Scottish National Gallery of Modern Art before it moved to its current home and since then has functioned as a contemporary art gallery, showing a programme of temporary exhibitions by modern and contemporary artists, often on a botanical theme. 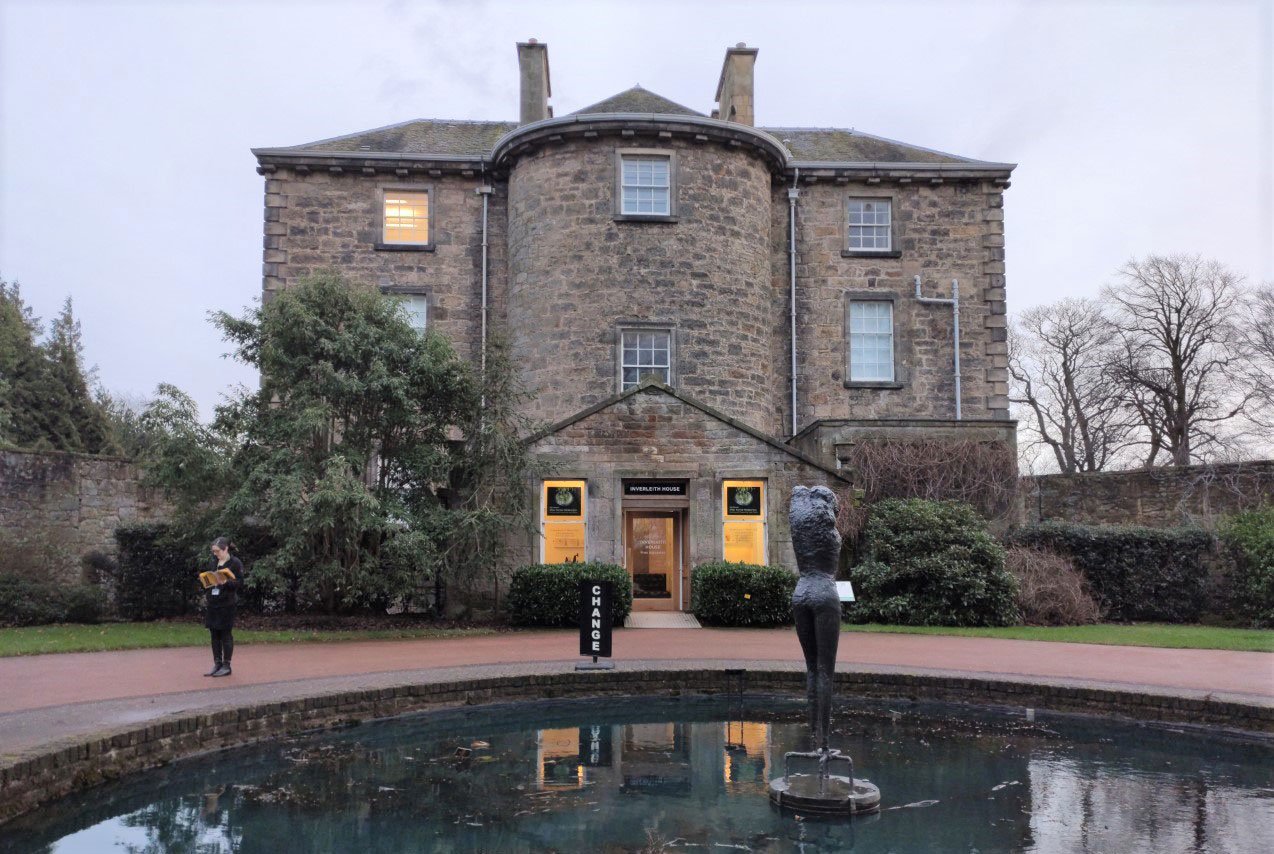 Adjacent to the Palace of Holyrood House, the Queen’s official residence in Scotland, The Queen’s Gallery hosts themed exhibitions of works from the Royal Collection, the largest private art collection in the world. Spread over 13 occupied and historic royal residences, including Buckingham Palace, Hampton Court Place and Windsor Castle, it comprises over a million objects, including paintings, works on paper, photographs, tapestries, furniture, ceramics, sculptures and textiles. 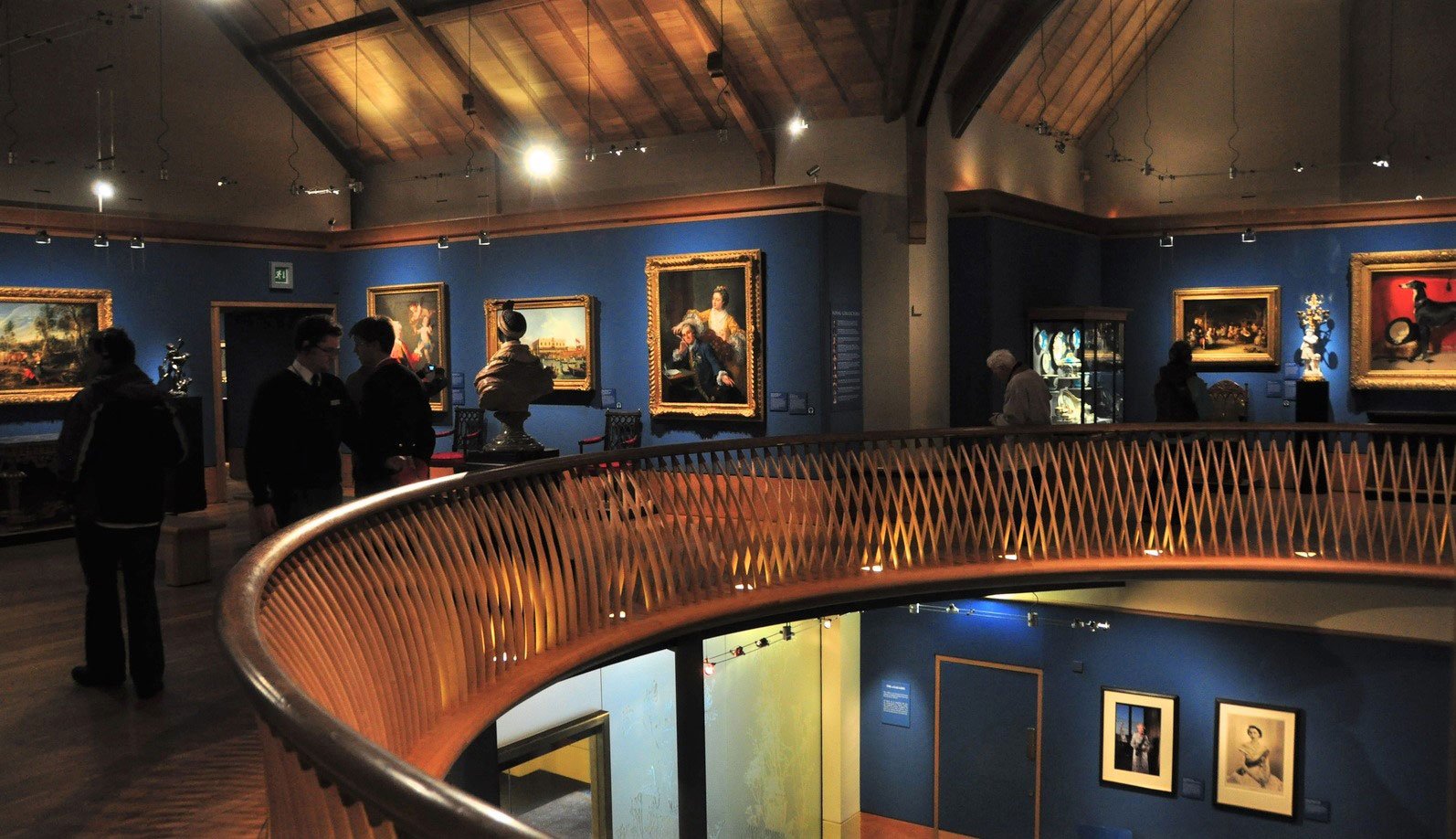 Waller Hugh Paton, ‘Edinburgh with a distant view of the Palace of Holyroodhouse’, 1862 (detail) from Victoria and Albert: Our Lives in Watercolour at The Queen’s Gallery

For an overview of Edinburgh’s independent galleries, not to mention an opportunity to explore the gorgeous Georgian New Town, take a stroll down Dundas Street, which has been the city’s ‘gallery row’ for five decades. You’ll find yourself criss-crossing the street as window displays entice you over.

Both & Gallery and Arusha Gallery present solo shows by contemporary artists and curated group exhibitions. Birch Tree Gallery focuses on artworks which have their roots in nature, whether in materials, inspiration or thematic elements. The Fine Art Society is a specialist in Scottish art from the 1700s onwards and also operates the basement Dundas Street Gallery, a rental space for local art groups. The Heriot Gallery presents a series of themed exhibitions, such as figurative work or floral studies. Established in 1842, the Scottish Gallery is both Scotland’s longest running commercial gallery and Edinburgh’s foremost independent exhibitor with an unmatched pedigree of showcasing emerging, established and historical artists. Founded in 1970, the Torrance Gallery was the first art space on Dundas Street and today presents one- and two-person exhibitions as well as three large mixed exhibitions a year. 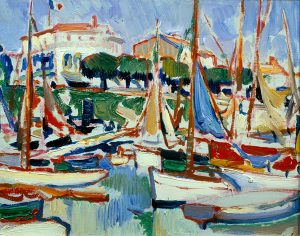