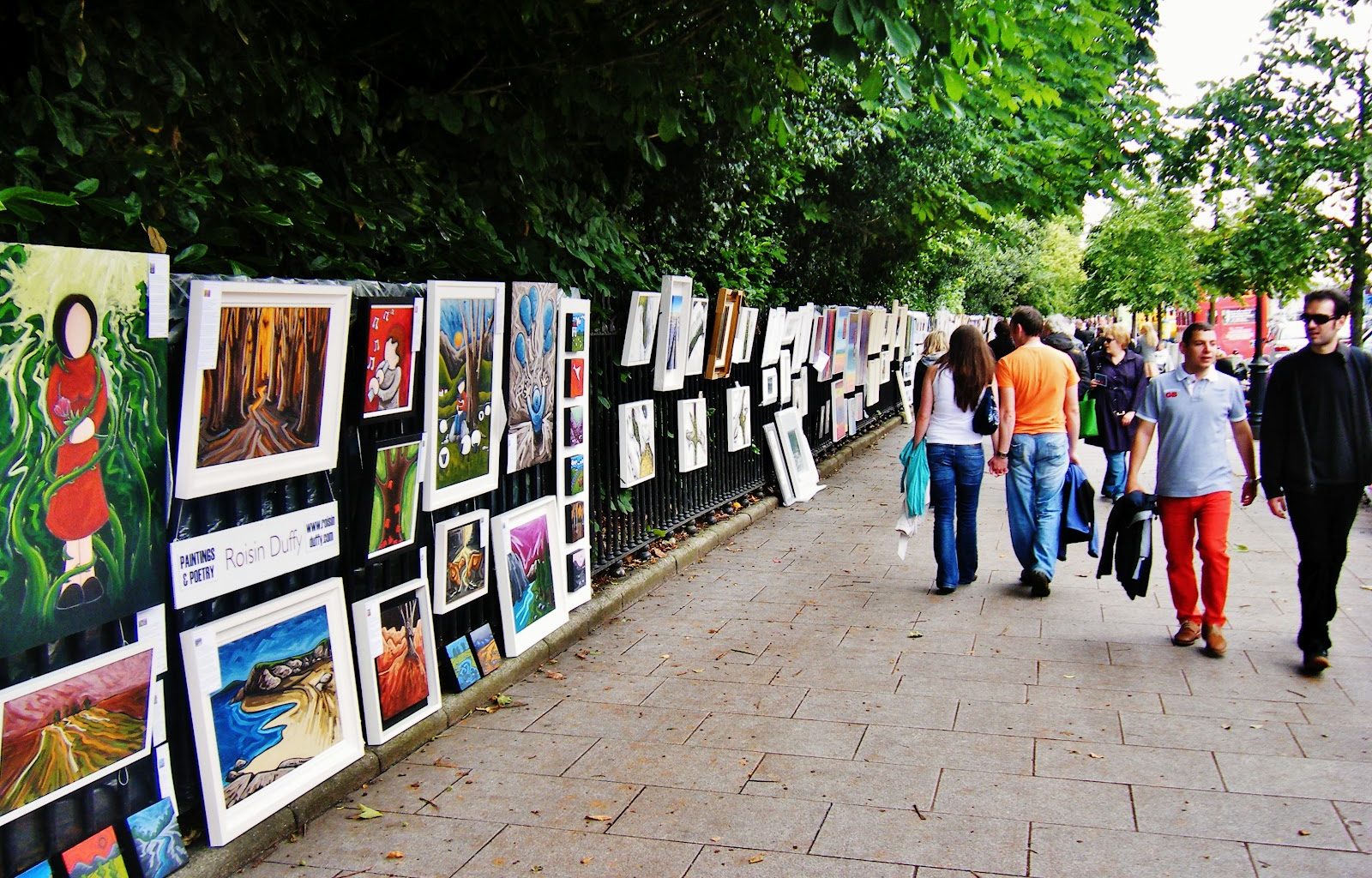 From the Book of Kells to a 3,500-work modern collection, art in Dublin spans twelve centuries.

Known throughout the world for its steady stream of creativity, Ireland has made huge contributions to music, theatre, film – and, of course, visual art. A healthy dose of some of the world’s most renowned artists have excelled in all genres, from portraiture, landscapes and illustration to mural, photography and video. (Artist Duncan Campbell took the 2014 Turner Prize for his video piece It for Others.) You’ll find many of their works in Dublin’s top art museums and galleries along with the best emerging Irish artists.

Based on an original collection donated by its founder, art dealer, collector and gallery director Hugh Lane (he held the first exhibition of Irish Art in 1904 in London and acquired the first Impressionist paintings for the gallery to appear in any public collection in Britain and Ireland), the Dublin City Gallery The Hugh Lane houses one of Ireland’s foremost collections of modern and contemporary art by leading national and international artists. Displays include The Lane Legacy exhibition, which celebrates the founder with works such as Music in the Tuileries Gardens by Manet, Lavacourt under Snow by Monet, Beach Scene by Degas and The Sleeping Princess by Edward Burne-Jones. Permanent displays are complemented by temporary exhibitions.

For many visitors the highlight is the London studio of the Dublin-born artist Francis Bacon, the entire contents of which were packed up after his death, shipped back to his home town and reconstructed in minute detail. In a revealing TV interview shown on a video loop Bacon describes his studio as “kind of a dump…I work much better in chaos. Chaos for me brings images.” You can also view a digital archive of over 7,000 items found in his studio.

Housed in the magnificent, 17th century Royal Hospital building in the suburb of Kilmainham, the Irish Museum of Modern Art is home to the National Collection of modern and contemporary art. The collection of over 3,500 works emphasises art produced after 1940 and features pieces by many significant artists such as Marina Abramovic, Louise Bourgeois, Robert Rauschenberg, Sol LeWitt and Roy Lichtenstein.

Opened in 1864, the National Gallery of Ireland has examples of every European school of oil paintings, watercolours, drawings, prints and sculpture, including an extensive collection of Irish works, notably by the Expressionist Jack Butler Yeats. Some of the highlights include Picasso’s Still Life with a Mandolin, Gainsborough’s The Cottage Girl, Renoir’s Young Woman in White Reading, Juan Gris’ Pierrot and Pieter Brueghel’s Peasant Wedding. There are also works by Van Gogh, Monet, Bonnard, Sisley, Goya, Degas, Matisse, Lavery, Vermeer, Rembrandt and Caravaggio (The Taking of Christ, the so-called ‘lost painting’ rediscovered in Dublin’s Society of Jesus after its whereabouts remained unknown for about 200 years).

Housed in the historic Collins Barracks, the collection of the National Museum of Ireland – Decorative Arts includes silver, ceramics, glassware, costumes, jewellery and coins, while a section called Reconstructed Rooms shows four centuries of furnishings. Other exhibits in the museum include decorative and household items such as crystal, silverware, glassware and ceramics. There is also an extensive collection of Asian art donated by the Dublin-born insurance magnate, Albert M. Bender. The museum shares its historic premises with a museum of military history.

The museum also has an impressive section devoted to the work of the Irish-born architect and designer, Eileen Gray (1878-1976). Relatively unheralded compared to contemporaries such as Le Corbusier (an admirer of her work), Frank Lloyd Wright and bauhaus designers, Gray was mainly known as a lacquer specialist, but went on to design interiors in a timeless style. In her Paris retail shop, which she opened in 1922, she designed and made every item on sale herself. The design of the facade was her first foray into architecture.

Located in the beautiful Georgian streetscape of Ely Place, the Royal Hibernian Academy is an artist-led organisation founded in 1823. The gallery has undergone a beautiful refurbishment in recent years, resulting in large, airy spaces ideal for displaying the full gamut of Irish art. Different sections are dedicated to various subjects and disciplines, such as portraiture, landscape, cityscape and photography. The Annual Exhibition at the RHA is the largest and longest running open submission exhibition in Ireland, while the ground floor Ashford Gallery is devoted to emerging artists.

A good place to find independent galleries is the busy commercial area immediately south of the Trinity College campus, where several streets lined with some of Dublin’s finest Georgian buildings are home to a clutch of galleries showing emerging and established Irish artists along with international work. They include: the Doorway Gallery, which places a lot of emphasis on familiarising the public with emerging artists; Gormleys Fine Art, which along with Irish artists shows work by important international contemporary artists such as Andy Warhol, Banksy, Damian Hirst, Robert Indiana and Keith Haring; and the Oriel Gallery, Ireland’s oldest independent gallery, which deals in painting and sculpture from the late 19th century to the present. (By happy coincidence, its name translates from the Irish as ‘window’ and from the Welsh as ‘gallery’.)

Some of Ireland’s earliest artworks can be seen in the Old Library of Trinity College, Ireland’s oldest university, where The Book of Kells is on display in a permanent exhibition entitled Turning Darkness into Light, which explains the story behind the exquisitely illustrated 9th century illuminated manuscript.

The campus is also the site of Sphere Within Sphere, one of a series of remarkable bronze sculptures by the Italian artist Arnaldo Pomodoro depicting an enormous globe with a crack on the surface revealing another globe inside. Versions of it can also be seen in about fifteen other locations around the world, including the Vatican Museums, the UN Headquarters in New York and Tehran Museum of Contemporary Art.

For over 25 years local artists have been permitted by license to display and sell work every Sunday from the railings around Merrion Square, where each artist is allocated a set ‘patch’ marked by a brass number embedded in the pavement. All the work must be original and sold personally by the artists or a close relative and none of it should be available in shops or galleries.

Merrion Square is lined on three sides are grand Georgian houses and on the other by the garden of Leinster House (formerly the parliament building of the Republic of Ireland), the Natural History Museum and the National Gallery. A statue of Oscar Wilde lounges on a large rock in the central park.

Most visitors to Dublin will eventually make their way to the Temple Bar district, a square-mile maze of cobbled streets and the epicentre of the city’s legendary pub scene. However, Temple Bar is also home to a number of art centres and artist-run galleries within a short walk of each other. Look out for: the Gallery of Photography, Ireland’s national centre for photography; the National Photographic Archive, which houses the world’s largest collection of Irish photographs; the Graphic Studio Gallery, which has the largest stock of original prints in Ireland; the Project Arts Centre, a multi-arts venue and the busiest in Ireland with some 600 events a year; and the Temple Bar Gallery & Studios, an artists’ studio complex and contemporary gallery.