From Renaissance treasures to modern masterpieces, Chicago has something for every art-lover

Art and design are woven into the fabric of Chicago. Monumental sculptures by top names dominate its downtown plazas. It boasts one of the world’s blockbuster art museums. Its contemporary art gallery has a long record of ‘firsts’. A revered architecture pioneer made his name there. And its built environment includes some of the world’s first skyscrapers.

The Art Institute of Chicago is the second largest art museum in the United States after New York’s Metropolitan Museum of Art and one of the world’s powerhouse galleries. The main entrance, flanked by two huge bronze lions, leads into a beautiful neo-classical building housing a world class collection covering 5,000 years of artistic output from around the world. Along with works by giants of American art such as Whistler, Koons, Pollock, Sargent and Rothko you can see the largest Impressionist collection outside the Louvre with works by the likes of Cezanne, Pissarro, Gauguin, Sisley and Monet.

The many highlights include Van Gogh’s The Bedroom, Grant Wood’s American Gothic (one of the nation’s most famous images, and certainly the most parodied), Edward Hopper’s Nighthawks, Picasso’s The Old Guitarist, Caillebotte’s Paris Street, Rainy Day, Chagall’s stained glass triptych American Windows and Seurat’s Sunday afternoon on the island of La Grande Jatte. The museum is also strong in early 20th century photography from the United States and Europe, including works by pioneers and expeditionary photographers. Famous among the institute’s alumni is Georgia O’Keeffe, who studied art there and received her first ever museum exhibition there in 1943 from which the museum bought its first painting by her, Black Cross, New Mexico (1929).

The Museum of Contemporary Art is one of the largest of its kind in the world and has a track record of firsts: the first museum to give a solo exhibition to the American sculptor Jeff Koons (famous for his stainless steel ‘balloon’ animals with mirrored surfaces) and the minimalist Daniel Flavin (of fluorescent light bulb fame); the first to stage a US exhibition by the Mexican painter Frida Kahlo; and the first US building to be wrapped by Christo. Its collection comprises thousands of post-WWII works in painting, sculpture, photography, video and installation by artists such as Jasper Johns, Andy Warhol and Alexander Calder, with many examples of late Surrealism, Pop Art, Minimalism, conceptual art and more.

The City Gallery in the Historic Water Tower, one of the few buildings to survive the Great Chicago Fire of 1871 (making it one of the city’s most treasured landmarks), is a small, ground floor space run by the city’s Department of Cultural Affairs and Special Events for changing exhibitions of work by Chicago artists.

Across the square from the Water Tower, the Loyola University Museum of Art (LUMA) is dedicated to art based on spiritual issues, reflecting the university’s Jesuit identity. Its mission is illustrated in the ground floor lobby by the Windows of Faith representing the five major world religions. The first floor Works on Paper Gallery hosts exhibitions of prints, drawings and photography, mainly by Illinois artists, while the second floor is given over largely to the Martin D’Arcy Collection of European art from the 12th to 19th century, including medieval, Baroque and Renaissance works paintings, sculptures, furniture, enamels and works in gold and silver.

Part of Columbia College, the Museum of Contemporary Photography has a permanent collection of over 10,000 works by 20th century American and international photographers, including Ansel Adams, Henri Cartier-Bresson, Dorothea Lange and Irving Penn. Even passers-by can enjoy the work in the Cornerstone Gallery, which is actually large monitors showing digitally projected images to the outside world in the museum’s windows.

Out in the Hyde Park area on the campus of the University of Chicago (where Barack Obama taught law), with its ivy-covered, neo-Gothic buildings clustered around the main quadrangle, the intimate Smart Museum of Art has European art from antiquity to the 19th century and American art spanning the 1880s to the 1950s. Thematic clusters mix paintings, sculpture and decorative arts. The best known work is probably Mark Rothko’s minimalist Number 2. The centrepiece of the decorative arts selection is a superb oak dining table and six matching chairs by the pioneering American architect Frank Lloyd Wright designed for the nearby Robie House, which is open to visitors. (See Architecture.)

In the university’s Cobb Hall is the Renaissance Society, a single space gallery which since the 1920s has presented ground-breaking contemporary art. Early exhibitions included works by the likes of Picasso, Brancusi, Mondrian, Chagall and Miro. The gallery also gave the first US solo exhibitions to Alexander Calder and Fernand Leger, while shows in more recent decades have included Bruce Nauman, Julian Schnabel, Louise Bourgeois and Jeff Koons.

Located in the Pilsen neighbourhood, home to one of the biggest Mexican populations in the US (and named by Forbes as one of the “12 Coolest Neighbourhoods Around the World”), the National Museum of Mexican Art has a permanent, 10,000-piece collection of work from both sides of the border and spanning from ancient Mexico to the contemporary Mexican-American art scene.

The 1871 Great Chicago Fire destroyed half the city, built as it was mainly of wood. What followed between the 1870s and the 1930s was the biggest building boom in US history, producing the world’s first highrises thanks to the introduction of metal frames and elevators. As a result Chicago is considered the birthplace of the skyscraper, some of which have at various times been the tallest structures in the world. It’s easy to see why Chicago doubled as Gotham City in the Batman movie The Dark Knight.

Volunteer guides from the Chicago Architecture Center lead a range of themed tours by foot, bus, boat, trolley, bicycle, Segway or the El (Chicago’s elevated train line). Highlights include: The Rookery, with a Romanesque entrance, Moorish ornamentation and a remarkable central court designed by Frank Lloyd Wright using goldleaf-incised Carrara marble facings; the Marquette Building, with Tiffany glass in the hallway and mother of pearl mosaics; the Board of Trade building, with a statue of Ceres, goddess of harvests, which was made in Paris and shipped over in pieces; and the weirdly handsome, block-long Harold Washington Library, with an owl, the Greek symbol of wisdom, perched on each corner.

Several landmark structures by Frank Lloyd Wright are open to visitors, including his first home and studio, the de facto birthplace of an architectural revolution called the ‘Prairie style’ because the designs complemented the land around Chicago. The surrounding Oak Park district has over 20 Wright-designed homes, the largest number anywhere.

Over in Hyde Park on the edge of the University of Chicago campus is the Robie House, considered the building which sparked the revolution and named by the Architecture Institute of America one of the ten most important 20th century buildings. Wright sought to bring exterior and interior into harmony with one another, saying: “It is quite impossible to consider the building as one thing and the furnishings another, its settings and environment still another.”

Thanks to a city ordinance obliging developers to set aside costs for public art, Chicago has more than 500 works by over 300 artists in public spaces and municipal facilities, so you don’t even have to set foot inside a gallery to see works by some of the top names in the history of art.

Downtown Chicago is in effect an urban sculpture garden and a stroll around the Loop, the city’s central business district so called for the rail system encircling it, takes in some monumental works. Look out (and up) for the 50-foot high, Cubist Chicago Picasso in Daley Plaza – is it a bird, a woman or the artist’s Afghan hound? – and across the street Joan Miro’s 39-foot sculpture The Sun, the Moon and One Star. Alexander Calder’s huge, red steel Flamingo can be seen stalking across Federal Plaza, while Jean Dubuffet’s jigsaw-like Monument with Standing Beast stands guard outside the James R. Thompson Center. There’s also a large mosaic by Marc Chagall entitled Four Seasons in Chase Tower Plaza. 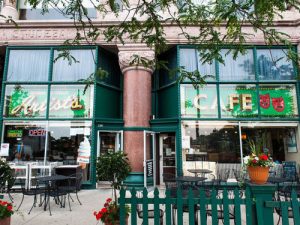 Hungry gallery-goers from the Art Institute of Chicago might head for the Artist’s Cafe, a classic American diner where the motto is ‘Our chefs are artists and food is their medium’. 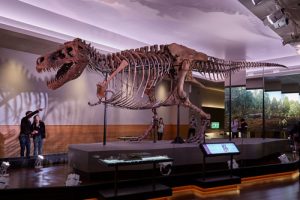 The Field Museum is home to “Sue”, the largest and most intact Tyrannosaurus Rex skeleton ever unearthed. The museum was Indiana Jones’s fictional home base in the blockbuster movie series.

The most famous comedy club in the United States is Second City, a breeding ground for comedians and comic actors who have found fame on TV and in movies, including Mike Myers, Dan Aykroyd, Tina Fey, Bill Murray, John Belushi, John Candy and a host of others. You never know when a famous graduate might drop by for an impromptu performance.