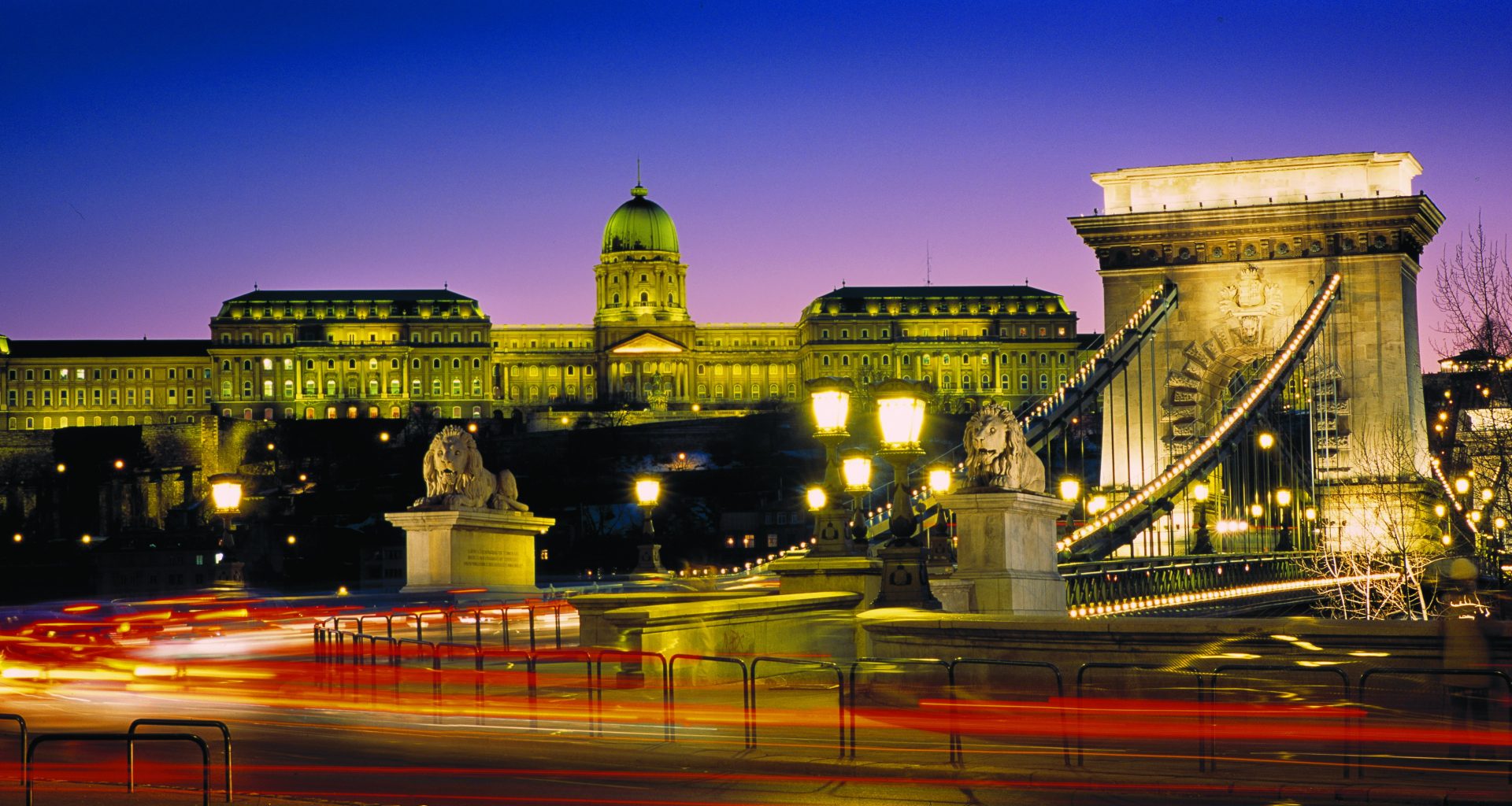 Renaissance, Baroque contemporary and ‘op’ art – you’ll find all this and more in the capital of Hungary.

Hungary’s capital is actually two cities in one facing each other on opposite banks of the mighty Danube. On the hilly west side, Buda was the ancient capital of the Kingdom of Hungary built around the magnificent 13th century citadel where visitors still marvel at commanding views from the turreted (and mysteriously named) Fisherman’s Bastion. Spread out on a broad plain on the opposite side the river, Pest is the main commercial part of the city where landmarks include the stupendous Parliament Building, Heroes’ Square and the broad, boulevard-like Andrassy Avenue. Along with the district of Obuda (Old Buda), site of the original Roman settlement around 50AD, the three parts were unified in 1873 to form Budapest. 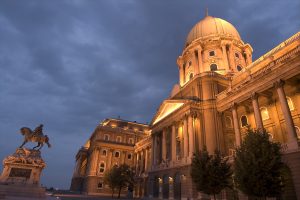 Reached by funicular from Adam Clark Square (named after the Scottish designer of the nearby Chain Bridge, the city’s iconic Danube crossing) the Hungarian National Gallery is housed in the magnificent Royal Palace, also known as Buda Castle. The beautifully displayed, 100,000-piece collection provides a comprehensive overview of the history of fine art in Hungary, from late medieval wooden sculptures and panel paintings, through the late Renaissance and Baroque periods to Hungarian art after 1945. 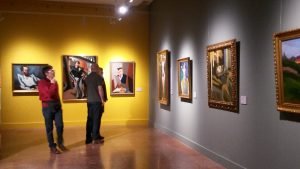 Most major European art movements are represented, including Classicism, Impressionism, Fauvism and Art Nouveau. The many highlights include some of the best known examples of Hungarian landscape and portraiture produced during Hungary’s 19th century Romantic period. There is also a series of special exhibitions. Added bonus: An expansive terrace with panoramic views of Pest and the Danube.

The Ludwig Museum, or LuMu, is the city’s main showcase for contemporary art, established in 1989 (before regime change) by the German chocolate magnate Peter Ludwig and his wife Irene, who amassed one of the world’s largest private collections of late 20th century art. LuMu has ten or so ‘sister’ museums all over Europe, including in Cologne, Vienna and St Petersburg. With over 500 pieces, LuMu has the largest collection of contemporary art in Hungary, tracing the history of the genre in Eastern Europe in the last quarter century through permanent displays and temporary exhibitions. It shares its home in the Palace of Arts, a modern complex by the Danube, with the Bela Bartok National Concert Hall and the Festival Theatre.

One the most impressive buildings in a city full of them is the Museum of Applied Arts, a Secessionist-style landmark and a work of art in itself. Established in 1872, making it the third such institution in Europe after Vienna and London, its green, ceramic-tiled dome and rooftops soar above walls covered with motifs and patterns from Moorish and Indian designs and Hungarian folk culture, while the snow-white interior in oriental style is topped off with a gorgeous, stained glass skylight soaring above the central Glass Hall.

Facing each other on Heroes’ Square are two equally splendid buildings with very different exhibitions.

Mucsarnok (Palace of Art) makes up for its lack of a permanent collection of its own with a vibrant exhibition programme of contemporary Hungarian and international art. behind its beautiful, neo-Classical columns are 2,000 square metres of exhibition space, including the glass-roofed main gallery and two project rooms.

Directly opposite and in contrast to its contemporary neighbour across the square is the Museum of Fine Arts, Hungary’s largest art museum. Reopened in 2018 after extensive renovations, one of its highlights is the restored Romanesque Hall, severely damaged in WWII and closed to the public for over 70 years. The museum houses a large collection of European Old Masters, including works by Raphael, Cranach, Goya, Velasquez, El Greco, Bruegel, Titian and many others.

It’s worth a tram ride out to this eastern part of the city, where Roman ruins, including the remains of an amphitheatre with an arena bigger than the Colosseum, are the site of the original settlement. You’ll also find a clutch of galleries and museums, including one devoted to a world famous name in art.

Spread over two floors in what used to be the storehouse of the Baroque Zichy Manor, a former count’s residence, the Vasarely Museum has some 400 works by the Hungarian-born father of op (optical) art, Victor Vasarely (1906-97), whose dizzying kinetic reliefs in plexiglass continue to bamboozle viewers.

Around the corner is a real find. The Imre Varga Collection has over 130 works by the man considered by many to be Hungary’s foremost sculptor. (On the way to the museum, which is stuffed with examples of Varga’s prodigious output, you will pass his Those Waiting, a group of bronze figures holding umbrellas.) Varga (1923-2019) was also commissioned to produce some 300 pieces now dotted around the world, including a sculpture in Tel Aviv of the Swedish diplomat Raoul Wallenberg (who helped save thousands of Hungarian Jews from the gas chambers), a sculpture of the Hungarian composer Bela Bartok in Brussels, a seven-metre high Prometheus in Antwerp and three gilded panels in the Hungarian Chapel of our Lady in the Vatican.

On the hill overlooking Obuda and the Danube, the Kiscelli Museum, located in a former Baroque monastery and church, has a collection of Hungarian art from about 1880 to 1990. Atmospherically displayed under vaulted ceilings, it includes silverware, paintings, glasswork, sculpture, drawings and installations. The vast former church with its bare brick walls (thanks to WWII Allied bombing) is now used as a dramatic exhibition and concert space and as a film set.

Photography fans will want to check out two galleries in Art Nouveau buildings within a short walk of one another on opposite sides of the elegant Andrassy Avenue. In the former residence and studio of a court photographer after whom it is named, the Mai Mano House showcases Hungarian and international photographic art.

Nearby the Robert Capa Contemporary Photography Center was opened in 2013 on the birthday centenary of the Budapest-born photographer (real name Endre Friedmann) famous for his images from five wars and the only photographer to take part in the WWII D-Day landings. The gallery hosts changing exhibitions, although curiously none of works by Capa himself.

For a great overview of Budapest’s independent galleries, take a stroll down Falk Miksa utca (‘utca’, pronounced ‘ootsa’, is Hungarian for street) behind the magnificent Parliament building, where you’ll find a range of work for sale from quality antiques to contemporary fine art. (Bizarrely, at one end of the street, which is named after a Hungarian politician, stands a head-scratching, cigar-toting bronze statue of Peter “Columbo” Falk and a squat bronze dog eyeing each other. Falk was of Hungarian descent on his mother’s side. Galleries here include: Bardoni, which specialises in early 20th century, Central European-made furniture, art and decorative objects; Virag Judit Galeria, an auction house which also stages several exhibitions a year of 19th and 20th century paintings and ceramics; and Kieselbach Galeria, which is positively evangelical about promoting Hungarian painting.

It’s worth taking the 20-minute bus trip out to Memento Park, where dozens of statues from the Communist years have found their (hopefully) final resting place. They include likenesses of Stalin, Lenin and Marx and other gigantic comrades. On a guided tour you can learn how Stalin could leave his boots behind in Budapest, although he never visited the city, why Lenin is holding a hat in his hand when he has one on his head and just how many people you could actually fit in a Trabant car. You may also want to ascend Stalin’s “waving balcony” and feel what it was like to be a Communist party leader at big parades in the old days. 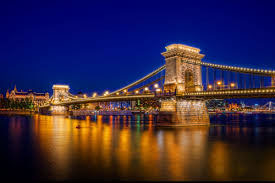 The finest crossing over the Danube is by the Chain Bridge, built by Scottish engineer Adam Clark and opened in 1849. 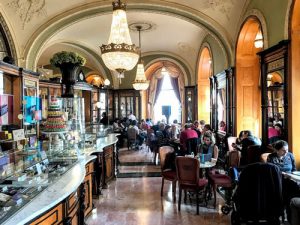 The Book Cafe on Andrassy Avenue is a wholly inadequate name for one of Budapest’s most opulent settings for a refreshment or light bite. It occupies the upper floor of an 1880s Art Nouveau building which was opened as a casino, later transformed into a luxury department store and today is a book emporium. The real gem though is the upstairs cafe in the former Lotz Hall, the casino’s ballroom, where you can now you can sit under chandeliers and marvel at the magnificent frescoes.

Dating from 1894, the recently renamed New York Cafe is sumptuously designed in an eclectic Renaissance/Baroque-style melange of marble, bronze, silk and velvet.

Opened in 1858, Cafe Gerbeaud is the finest example of cafe culture from the glory days of the Austro-Hungarian empire. You’ll gain weight just looking at the cake display.

The oldest coffee house is the Ruszwurm Cukrászda (Ruszwurm Confectionery) on the Buda side of town, which has been serving sweet-toothed customers since 1827. 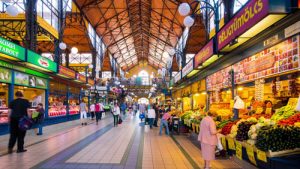 From fruits, vegetables, dairy products, salamis and pickles to seafood, paprika, wines, souvenirs and home-style meals, you’ll find it all at the Great Market Hall. 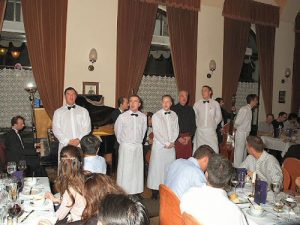 Appropriately located near the Opera House, Belcanto is a great choice for a dress up dinner. Bonus: Your servers will serenade you with a burst of opera.

If Bauhaus is your style, head for Erzsebet Square in the heart of the business district, where you will find the Terminal Restaurant and Bar, a beautifully restored building which was previously a bus terminal.