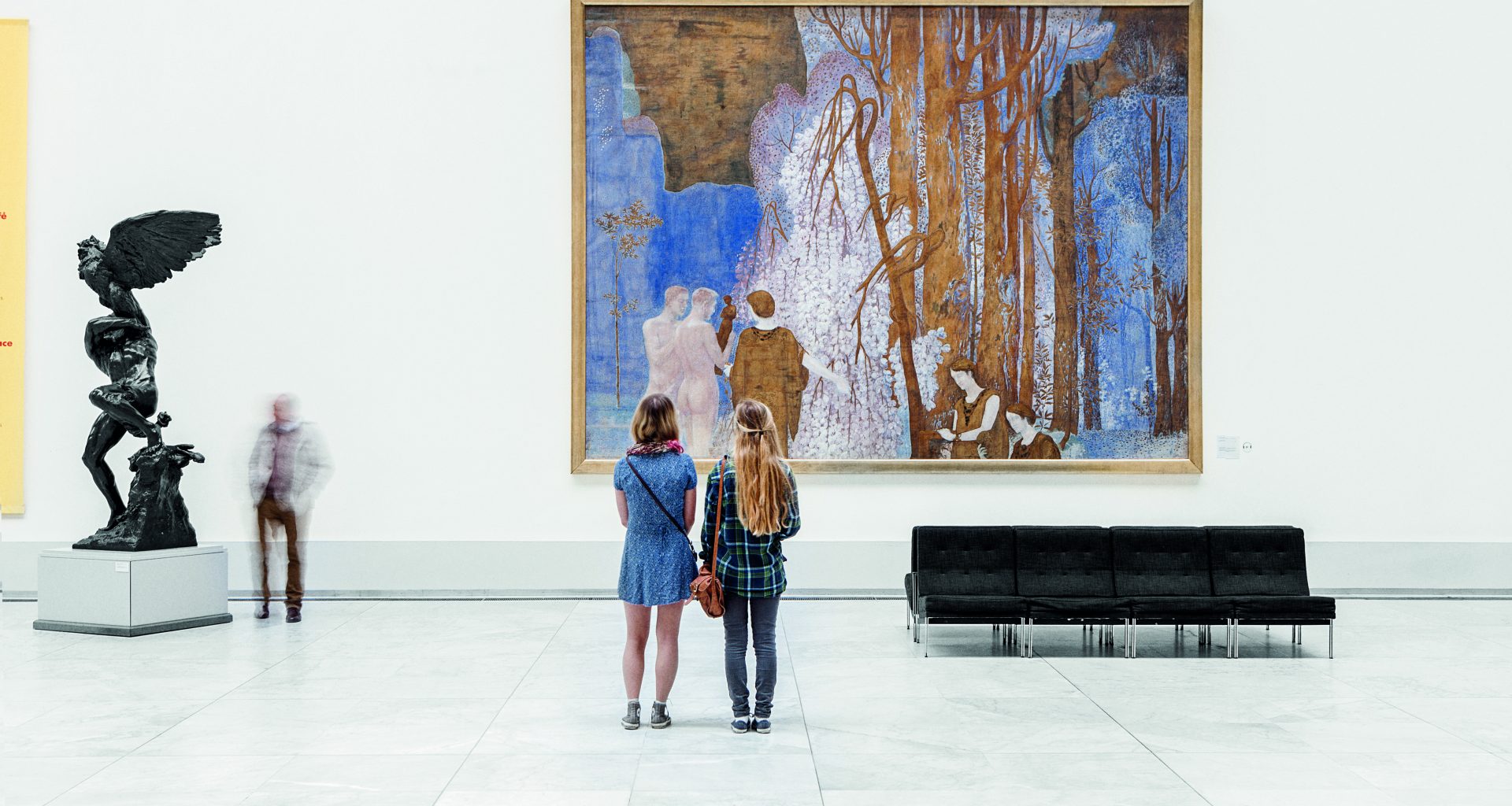 From Flemish Masters to a pantheon to plastic, the Belgian capital has seven centuries of art and design 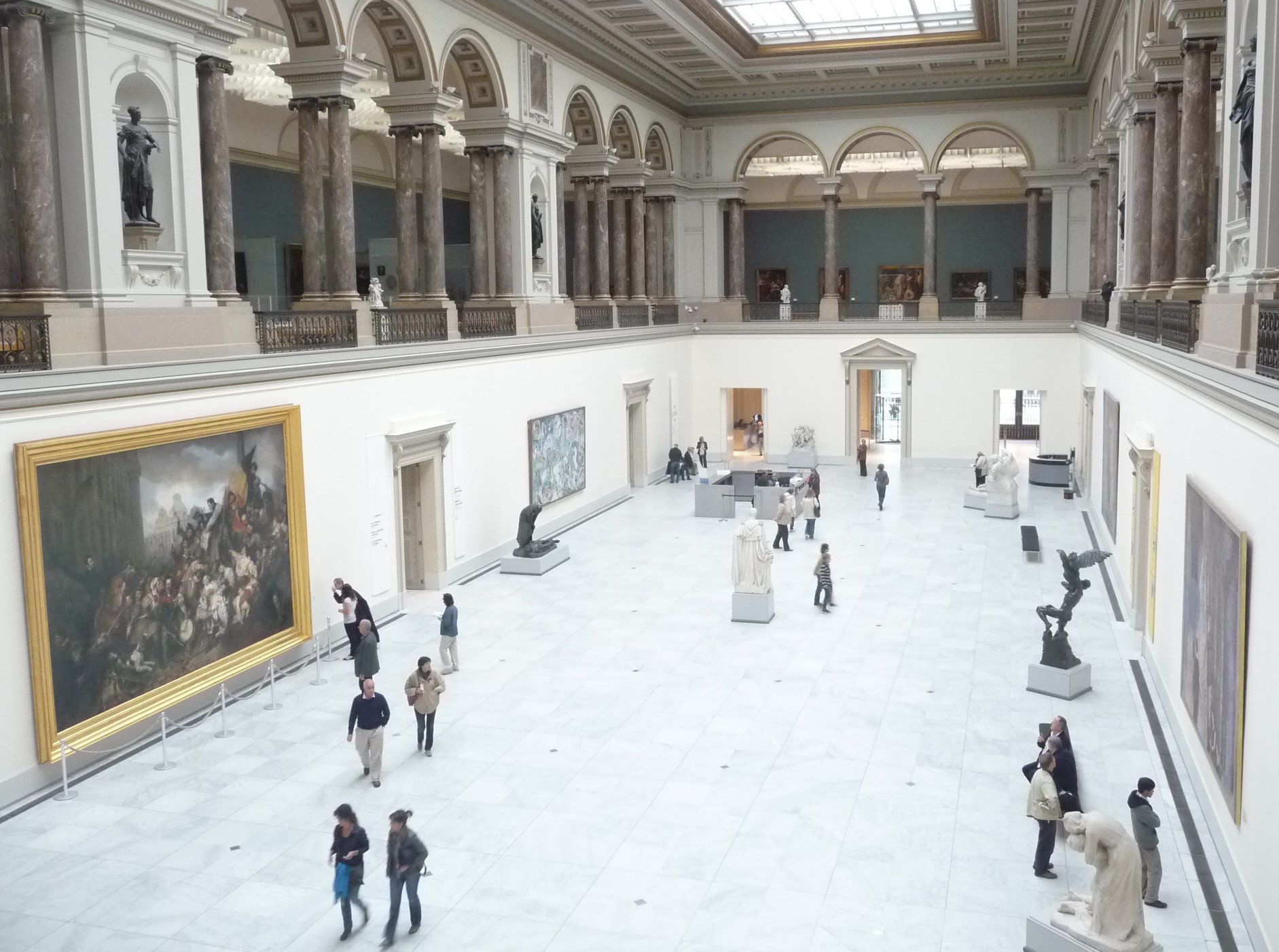 A bit French but not France, a little Dutch but not Holland, Belgium has historically marked the transition from Latin to northern cultures, making Brussels a fitting centre for the European Union. With one of Europe’s powerhouse national art collections, an entire museum dedicated to its most famous artist, more Art Nouveau buildings than anywhere else and a vibrant design industry, it has much to offer culture-vultures. Throw in the Grand Place (Europe’s most beautiful square?), the Royal Saint Hubert Galleries (with Europe’s tallest shopping arcades) and the gleaming, silver Atomium (one of Europe’s most recognisable landmarks) and you can’t fail to come away impressed.

Atop the Mont des Arts (Arts Hill), the Museum of Ancient Art has a remarkable collection of paintings and sculptures from the 14th to the 18th centuries, including ground-breaking work by the Flemish Primitives and paintings by Flemish masters such as Bruegel, Rubens, Jordaens and Van Dyck as well as some masters from outside Belgium such as Tintoretto, Bosch and Rembrandt. 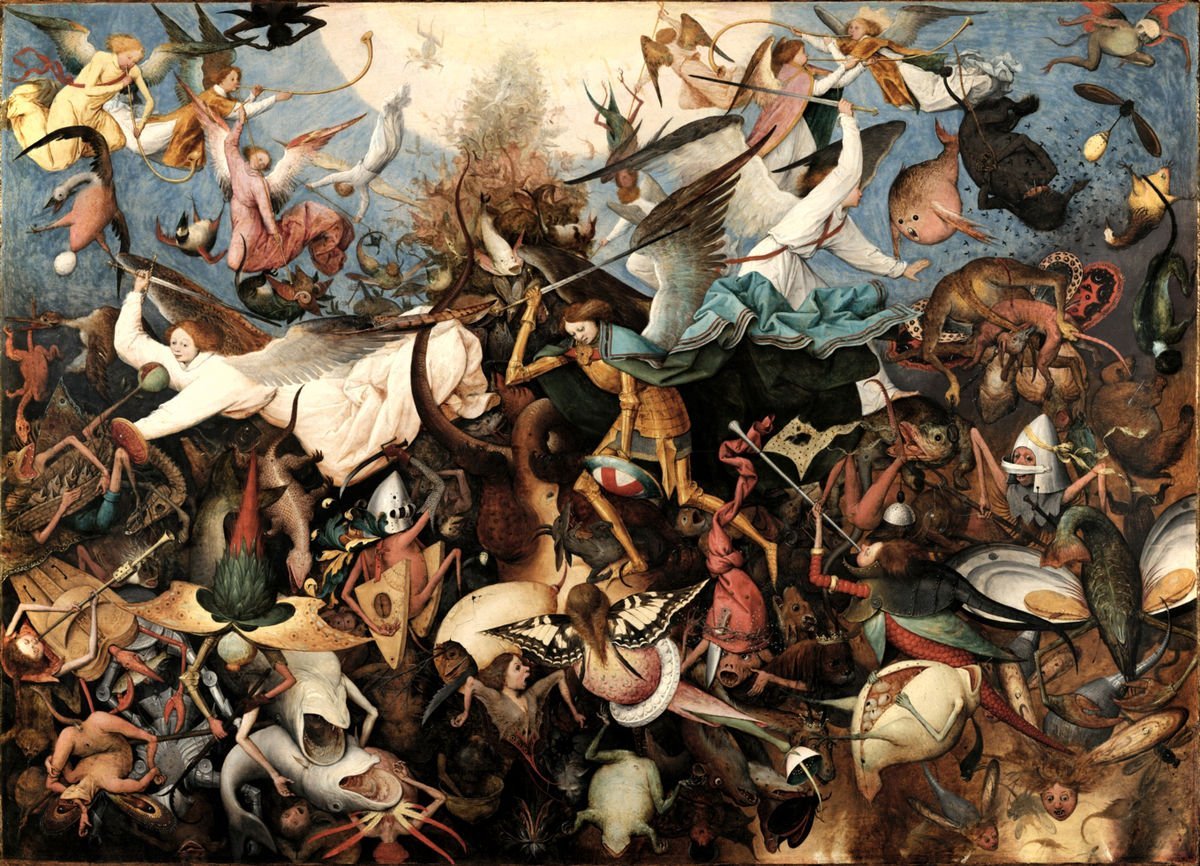 The museum’s Bruegel collection is the second largest in the world. (The Kunsthistorisches Museum in Vienna has the largest, since most of his paintings were bought by members of the ruling aristocracy of Bruegel’s time, the Austrian-based Habsburgs.) Bruegel is famous for his glorification of the landscape, depictions of rural life and of the humble peasant as the embodiment of Flemish identity, while his darker side reflected on the struggle between good and evil or contained critical social comment.

While Paris was the epicentre of the art world around the turn of the 19th and 20th centuries, Brussels was also a thriving artistic hub. To illustrate the point, the Fin de Siècle Museum (in French, the period is known as the ‘end’ rather than the ‘turn’ of the century) showcases Belgian artists, sculptors and photographers who are less known internationally because they did not leave ‘provincial’ Brussels to make their name in Paris.

Covering the period 1868 to 1914, these include the symbolism of Fernand Khnopff and Leon Spilliaert, the hyper-realism of Henri de Braekeleer, the social realism of Constantin Meunier and the multi-disciplinary genius of Henry van de Velde and James Ensor. A selection of works by their international contemporaries, such as Paul Gauguin, Auguste Rodin, Pierre Bonnard and Alphonse Mucha, sets the Belgian scene in a wider context.

A giraffe in a wine glass? A limbless torso on a beach? An eagle wearing a jacket? It must be the Magritte Museum, which houses the world’s most extensive collection of works by the Surrealist, René Magritte (1898-1967), the most important Belgian painter of the 20th century who spent most of his life in Brussels. Over 200 works form a chronological and thematic journey through his life and work.

Famed for his subversive imagery, which anticipated Pop Art and conceptual art, the man in the bowler hat worked in a variety of media, including oils, gouaches, drawings, sculptures, painted objects and graphic art. The museum also has advertising posters, vintage photographs and films directed by Magritte himself.

Down the slope from the Mont des Arts is the Bozar Centre for Fine Arts (Beaux-Arts – get it?). Designed by Victor Horta (see Art Nouveau), the sprawling, multi-level building itself is a work of art, with galleries, a theatre and a cinema.The expansive exhibition spaces host up to ten shows a year and have featured the likes of Jeff Wall, Frida Kahlo, Gilbert and George, Prints in the Age of Bruegel and many others. 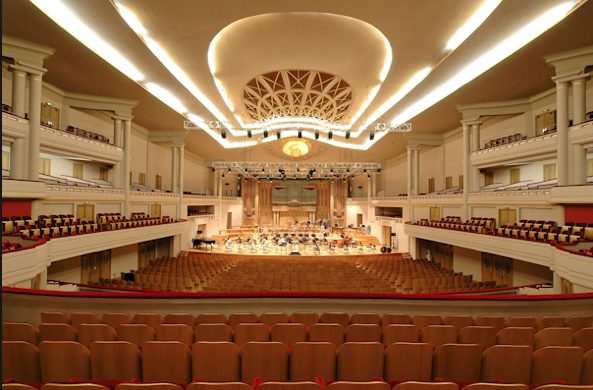 A few hundred yards from the Atomium, the Art & Design Atomium Museum (ADAM) pays homage to all things plastic. Based on collector and plastic artist Philippe Decelle’s private collection, the only one of its kind in the world, ADAM’s mesmerising display of artworks, furniture, mannequins, wall pieces, household items and electrical goods recalls plastic’s heyday in the pop culture of the 1960s, when it was seen as the expression of a new era and its ultra-bright colours echoed the psychedelic age. Top designers and artists such as Andy Warhol took to the medium, which eventually came to the end of its golden age with the oil crisis of 1973. 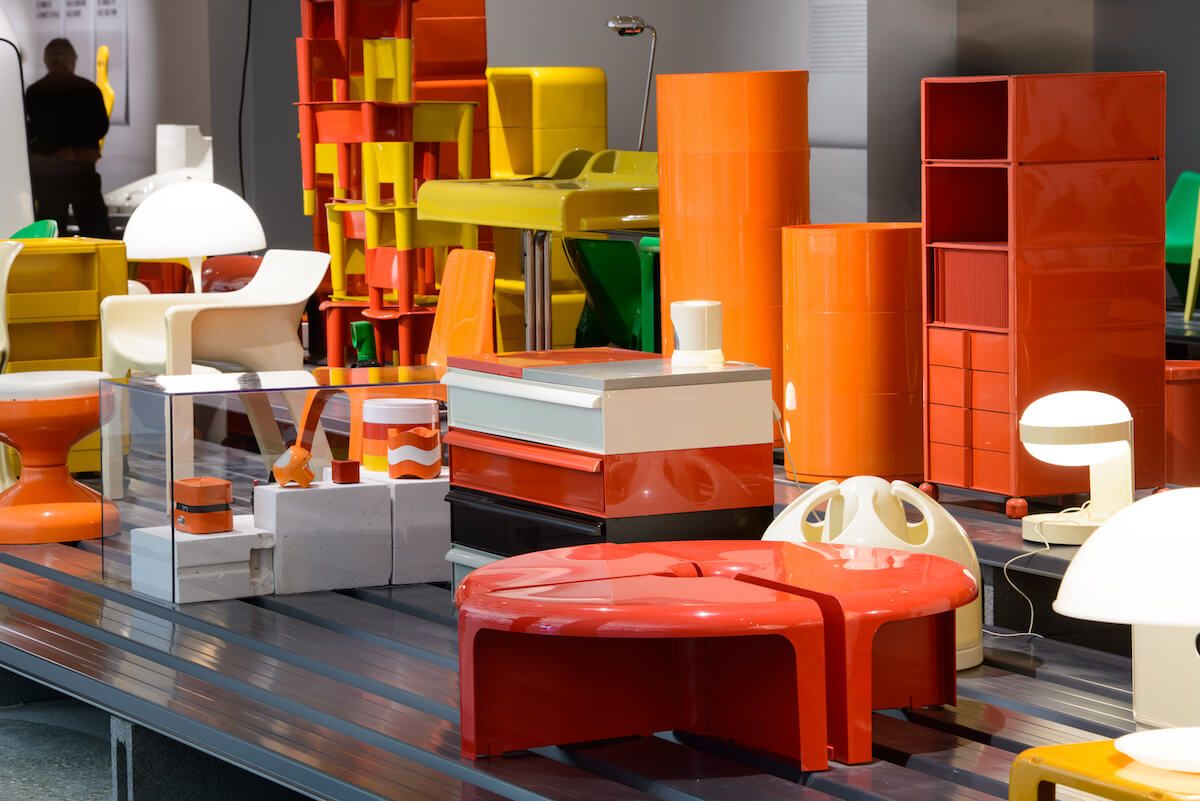 The Art & Design Atomium Museum (ADAM) is a pantheon to plastic

In the Parc du Cinquantenaire (named for the 50th anniversary of Belgian independence in 1880), the Art and History Museum is a vast, temple-like building housing art and artefacts from prehistory to the mid-8th century, including relics from Egypt, the Near East, Iran and classical antiquity. There are also non-European treasures from China, Asia, the Islamic world, Inuit culture and pre-Columbian central America and Oceania, while European decorative art includes tapestries, Art Deco, Art Nouveau, silverware, ceramics and glassware.

Brussels is the capital of Art Nouveau, and it only takes a few minutes strolling around the city to be struck by the legacy the movement left in its buildings. Practically everywhere you look there are ornately shaped facades, sculpted stonework and decorative wrought iron, all embellished with nature-inspired motifs. Art Nouveau flourished between 1890 and 1910 as a reaction against rampant industrialisation, and its airy, light-filled style was adopted in civic buildings and in the homes of a new middle class. Its influence spread as far as Antoni Gaudi in Spain and Charles Rennie Mackintosh in Scotland.

Brussels boasts the father of Art Nouveau in Victor Horta. (You may arrive in the city at one of his creations, Central Station.) Horta’s private house is open to the public as the Horta Museum. A UNESCO World Heritage Site, it is poetry in architecture and interior design, with three floors merging harmoniously. No detail is too small, from door handles and keyholes to coat hooks and light bulbs – all matching the ubiquitous plant-like motifs. 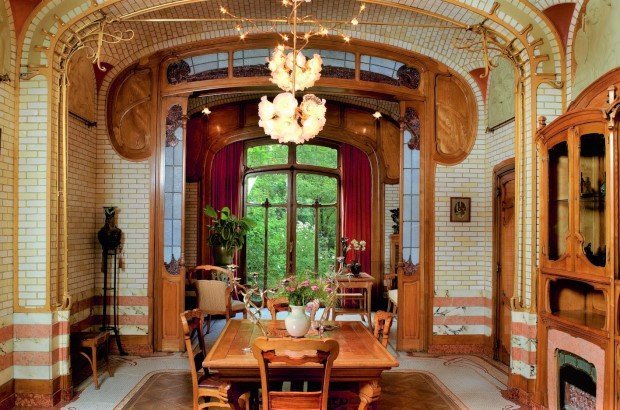 Poetry in design in the Horta Museum

If you don’t make the tram ride to the Horta house in the St Gilles district, which is full of Art Nouveau buildings, just down the hill from the Magritte Museum you can’t miss the ornate Musical Instruments Museum, where the views from the rooftop cafe are among the best in Brussels.

Your can also admire Horta’s handwork at the Hotel Tassel. Built in 1893, it became his calling card and is considered the very first art nouveau building in the world. Now a private office, it can only be viewed from the outside. 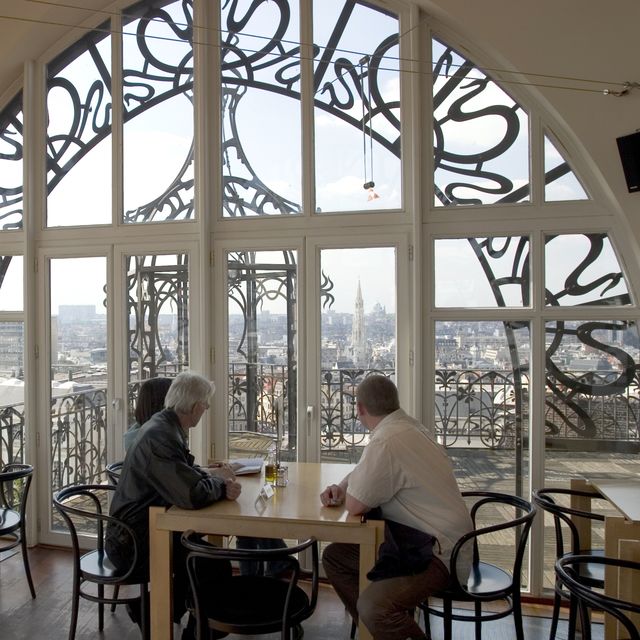 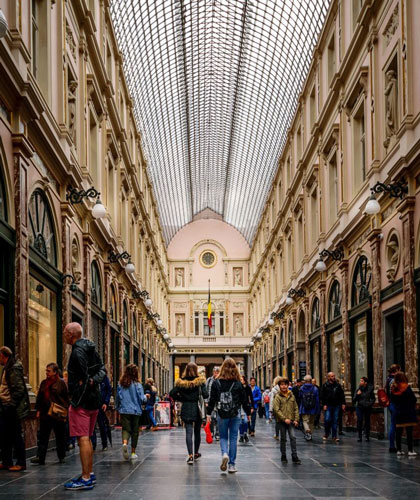 The Royal Saint Hubert Galleries have the tallest arcades in Europe.