Pretty as a picture

In the 15th century the Low Countries were a magnet for artists and craftmakers, and Bruges was at the forefront. The city had become a commercial powerhouse and home to wealthy merchants. This in turn attracted artists and artisans keen to decorate their grand homes, while the church emerged as a major source of commissions. The foremost group of painters became known as the Flemish Primitives, led by artists such as Jan van Eyck, Hans Memling and Gerard David, who lived and ran workshops in Bruges. All the paintings attributed to Van Eyck, for example, were produced there between 1432 and 1441. 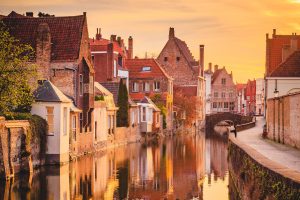 Today Bruges is the capital and largest city of the province of West Flanders in Belgium. The historic city centre, often likened to the proverbial ‘movie set’, is a UNESCO World Heritage Site. While often referred to as one of Europe’s best preserved medieval cities, is more accurately described as one of the best restored. The truth is, by the mid-19th century Bruges had become an impoverished provincial city. This led to the city’s first foray into tourism with a council-run drive to restore medieval buildings and construct new ones in the now familiar neo-Gothic style. Hence Bruges was ‘rediscovered’.

Bruges has also made a comeback as an art and heritage centre, with the cultural institution Musea Brugge overseeing its prime sites, along with several independently run venues. Most are clustered together in the city centre in what must be one of the most dense concentrations of art and craft anywhere in Europe.

The city’s museum of fine arts, the Groeninge Museum offers an overview of six centuries of art in the Low Countries, from the Primitives through to the Surrealists and including the Renaissance, Baroque, 18th and early 19th century Bruges neoclassical work and the Flemish Expressionists. The most popular works are on permanent display, while others are regularly rotated to give other works in the collection an airing. 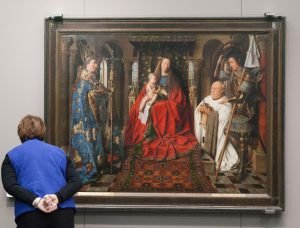 The highlight of the museum is one of the finest collections in the world of works by the Flemish Primitives such as Jan van Eyck, Hans Memling and Gerard David, whose paintings are characterised by highly detailed realism. Their attention to flawlessly simulating fabrics and surfaces enabled them to depict metals and precious stones reflecting and refracting light and fur so soft-looking you want to touch it. Although oil paint had existed for a long time, the Flemish Primitives refined the technique by mixing paint with linseed oil instead of egg yolk. They also achieved a new depth and luminosity through a glazing technique by which several translucent layers of paint were laid on top of one another. The result was unprecedented quality.

Some of the stand out works include: Jan van Eyck’s astonishing tableau Madonna with Canon Joris van der Paele (1434-36), Hans Memling’s Moreel Triptych (1484), Hieronymus Bosch’s triptych The Last Judgement (1500-05), which shows Jesus sending righteous souls to the left panel and sinners to the right from the depraved melee in the middle, and Gerard David’s gruesome Judgement of Combyses (1498), which portrays the Persian king being flayed alive according to legend. 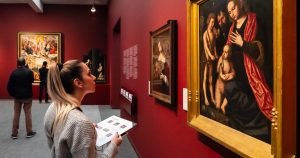 The Groeninge also has a unique ensemble of 17th and 18th century Bruges art from when it was customary for local artists to gift works to the Bruges Academy, the forerunner of the Groeninge, in the hope that their paintings would be prominently exhibited. The foremost Belgian surrealists Rene Magritte (The Assault) and Paul Delvaux (Serenity) also make an appearance, while there is a fine selection of Flemish Expressionist works. There is also a small abstract art collection.

The stately 18th century villa the Arentshuis houses a collection of paintings, drawings and etchings by Frank Brangwyn (1867–1956), a Bruges-born artist of Welsh parents who moved there around 1865. The collection consists mainly of works he donated to the city. By way of thanks he was made an honorary citizen of Bruges in 1936 and in the same year the Arentshuis was converted into the Brangwyn Museum. 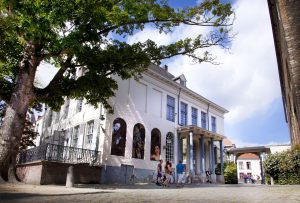 One of the most productive artists of his generation, Brangwyn’s work reflects the influence of various movements, including social realism, the Vienna Secession, French impressionism, the Nabis, Art Nouveau, Art Deco and Modernism. His subjects range from hard life in the docks and factories to exotic scenes from his travels. His images of WWI (he was an official war artist) are particularly powerful.

Having earlier worked in the studio of the celebrated designer William Morris, the spiritual father of the Arts and Crafts movement, Brangwyn also designed furniture, carpets, ceramics, tapestries, stained glass windows and jewellery. Even the display cabinets are made to a design by him. He also designed the British pavilion for the 1905 Venice Biennale. 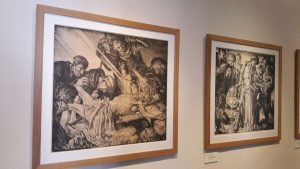 Brangwyn’s work is shown on the upper floor of the Arentshuis, while the ground floor mainly features temporary presentations of graphics from the Musea Brugge Print Cabinet and 19th and 20th century works from the Groeninge Museum. In the adjacent Arentshof, once the inner garden of the Arentshuis and now a quiet city park, stand four horsemen from Rik Poot’s Apocalypse.

Boasting the second tallest brick church tower in the world at 115.5 metres, the Church of Our Lady has numerous paintings as well as the magnificent tombs of Mary of Burgundy and Charles the Bold and 13th and 14th century painted crypts. (Anxious to secure their place in the afterlife, prominent Bruges citizens commissioned artists to create tomb paintings, memorial scenes and altarpieces in praise of God.)

The centrepiece, however, is Michelangelo’s marble Madonna and Child (1506). Originally intended for the cathedral in Siena, it was purchased by an Italian-based Bruges cloth trading family and shipped home. It is the only one of Michelangelo’s sculptures to leave Italy in his lifetime. 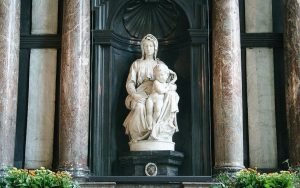 The statue was stolen twice, first by Napoleon for his Musee Napoleon in Paris (now the Louvre) and returned after his defeat at Waterloo in 1815, and later by the Nazis for Hitler’s planned museum in Linz. It was recovered from an Austrian salt mine by the Monuments Men, the art recovery team made famous in the film of the same name starring George Clooney. 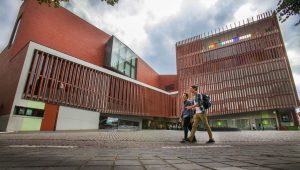 A self-guided tour leads visitors on a full ‘circuit’ of the building, from the foyer, where French composer Edgar Varese’s soundscape Poeme Electronique seems to emanate from the building itself thanks to a speaker system emitting sounds from seemingly every direction, to the seventh floor rooftop terrace, which offers panoramic views of the city.

Visual art highlights include Belgian artist Luc Tuymans’ first permanent mural Angel, installed in what has become known as the Angel Room. This led to the ongoing creation of The Angel Series for which composers from all over the world have created solo, duet or trio works inspired by the mural and played over the sophisticated sound system. One of the architects, Paul Robbrecht, called this space the “chapel” of the Concertgebouw. 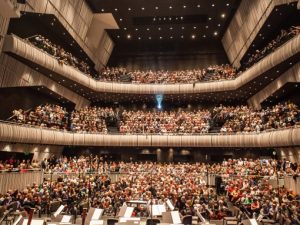 Look out also for Belgian artist David Claerbout’s video The Close. Projected onto a wall, it shows early 20th children playing in a street, their figures gradually morphing into human-like sculptures. The piece is accompanied by Estonian composer Arvo Part’s slow-moving Da pacem Domine. Elsewhere is the Sound Factory, an interactive space for sonic art.

Named after a Flemish courtier, the Gruuthusemuseum tour takes visitors through three crucial periods in the history of Bruges: the Burgundian Golden Age, the 17th and 18th centuries and the ‘rediscovery’ of Bruges in the 19th century. 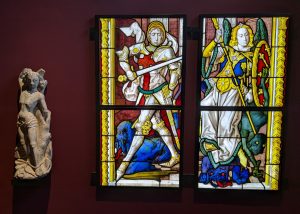 The many rooms are stuffed with tapestries, paintings, stained glass windows, elegant wooden sculptures, lace, porcelain and objets d’art evoking a noble lifestyle through the centuries. A highlight is the private, late 15th century prayer chapel which overlooks the Gothic choir of the adjacent Church of Our Lady, enabling the residents to participate in a service without actually entering the church.

One of the most visited attractions in Bruges, the family-friendly Historium takes visitors on a walk through history beginning in the 15th century, when Bruges was a major trading centre with double the population of today. With the use of film, backdrops and special effects, a series of themed rooms bring to life the city’s period as a trading and financial capital, when it was “the New York of the Middle Ages”.

Your virtual guide is Jacob, apprentice to the artist Jan van Eyck, who hires Anna as the model for the Madonna in his Madonna with Canon Joris van der Paele. The artist is seen working on the painting in his studio. There is also a permanent exhibition telling more about medieval Bruges, while there are great views from both the tower and the terrace cafe overlooking Market Square.

Entered through the gorgeous Marian Portal, the 12th century Saint John’s Hospital is one of the oldest in Europe. Today art and objects are displayed in the former medieval wards, church and chapel. Jan Beerblock’s The Wards of St John’s Hospital (c.1776) shows the original working institution with individual bed alcoves and the sisters attending to patients.

The main attractions are six works by Hans Memling, four of which he created especially for St John’s. In fact virtually all the objects on display were created for their specific locations, offering a rare opportunity to view art in its original context. Two Memling paintings – the Triptych of Jan Floreins and the St John Altarpiece – are the only ones in existence with his signature and date on the frame. St John’s has been their home since the late 15th century. 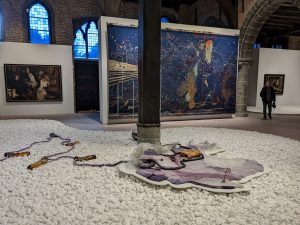 Also on display is Memling’s exquisite Saint Ursula Shrine, a miniature gold chapel decorated with small tableaus telling the story of Ursula and her followers’ fate. A Memling painting in 3D, this ‘Gesamtkunstwerk’, or total artwork, would have been viewed like a medieval movie.

The main floor and the attic, with its stupendous 13th century oak trusses, host temporary exhibitions of contemporary art, while elsewhere in the complex there is a fully preserved 17th century pharmacy. PLEASE NOTE: From February 6, 2023 St John’s will be closed for major renovation until December 2023.

Behind its ornate facade, the 15th century Stadhuis (Town Hall) has been the city’s seat of government for over 600 years. A monumental staircase leads up to the stupendous Gothic Room, where the city council still meets monthly. If ever a room deserved to be described as jaw-dropping, the Gothic Room is it. 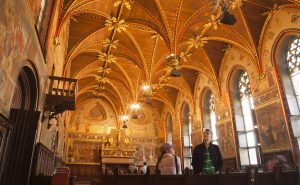 At the end of the 19th century, when the room was being used as the city library, it was decided to transform it and an adjacent space into one large chamber to host council meetings and receive dignitaries. The beautiful vaulted ceiling was extended, new decorative elements were created and the entire hall was repainted with extensive murals depicting the medieval history of the Flemish people. The design and execution of the murals was entrusted to Albrecht De Vriendt, Director of the Academy of Fine Arts in Antwerp. When Albrecht died in 1900, his brother Juliaan completed the works. Both are depicted in a group scene.

Next door the Renaissance Room is dominated by a monumental, 16th century fireplace of marble, alabaster and oak built as a tribute to Emperor Charles V, while on the ground floor are life-size portraits of the city’s former rulers, including mayors, kings, emperors and even Napoleon.

In the Cloths Hall on the ground floor of the belfry building on Market Square, the Salvador Dali Exhibition is a large private collection of graphic art, sculpture and drawings by the eccentric Spanish surrealist, all officially authenticated and described in the ‘catalogues raisonnes’ of Dali’s work. They are shown amid the Daliesque decor of mirrors, gold and shocking pink. 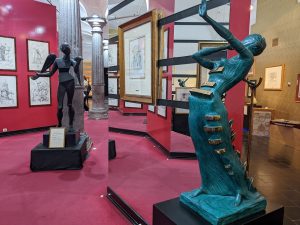