Ludwig van Beethoven (1770-1827) was born in Bonn and spent the first 22 years of his life there. A child prodigy (he played the organ at morning mass aged ten and published his first piano sonatas at twelve), he went on to become the foremost European classical musician of his time and today is the world’s most performed composer. With Beethoven widely associated with Vienna, where he headed in search of fame and fortune in what was then Europe’s preeminent classical music centre, his home town is always keen to remind the world of his origins.

And that common image of Beethoven as a dour, grim-faced individual? Well, you wouldn’t look too happy either if, as he did, you spent four hours-long sessions covered in plaster with straws up your nose to breathe through while having your likeness taken for a bust.

You can take a Beethoven Walking Tour (with or without guide) of sites associated with his early life, including his birthplace, the church where he was baptised (the font is still there), the site of the inn where he celebrated his farewell before leaving for Vienna and the monumental statue of him in the Münsterplatz depicting him with pen in hand looking to the heavens for inspiration. Liszt and Schumann helped in the effort to have it installed and Queen Victoria was among the dignitaries at the unveiling.

No visit to Bonn is complete without a visit to the Beethoven-Haus, where the composer was born. A World Heritage Site, it houses the world’s biggest Beethoven collection and is one of the most visited music museums anywhere. The permanent display has been completely reconfigured, creating more exhibition space and a performance room for recitals.

You will have no trouble finding a Beethoven souvenir to take home, including Beethoven beer, chocolate, wine, t-shirts, busts, masks (life and death), statuettes, bookmarks, umbrellas, coasters, keys chains and a host other memorabilia items. The ‘official’ shop opposite the Beethoven-Haus is a good place to find them, although they seem to be available all over town.

There is also an excellent CD of new music entitled ‘250 Piano Pieces for Beethoven’ performed by the extraordinary pianist Susanne Kessel, who invited composers from all over the world to write short, Beethoven-inspired works for her unique compilation.

Out on Bonn’s ‘museum mile’, the Bundeskunsthalle (Federal Art Hall) is one of the most visited in Germany. With no collection of its own, the stark, white building hosts exhibitions relating to art and cultural history, archaeology, natural sciences and other fields of knowledge from around the world. Examples include From Mosul to Palmyra – A virtual journey through the World’s Cultural Heritage and California Dreams – San Francisco: A Portrait.

Directly opposite the Kunsthalle, the Kunstmuseum (Art Museum) in its dramatically angular building shows 20th and 21st century art. The museum has a comprehensive collection of German art, with a focus on August Macke and other area Expressionists, as well as a major portfolio of German art post-1945, including Joseph Beuys’ multiples, graphic art, photography and video.

If you haven’t had your fill of Rhine Expressionists, a visit to the August Macke Haus should do the trick. The painter’s first and only home and studio is now a biographical museum, where his works are accompanied by changing special exhibitions on Expressionism and Modernism. 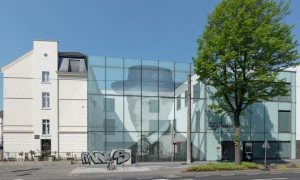 Classical art-lovers will want to head for the University-run Akademisches Kunstmuseum (Academic Art Museum), which is stuffed with statuary and artefacts from Greece and Rome, including Germany’s largest collection of antique sculpture plaster casts. 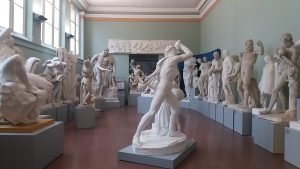