From antiquity to contemporary art, Barcelona museums cover the spectrum of western art. 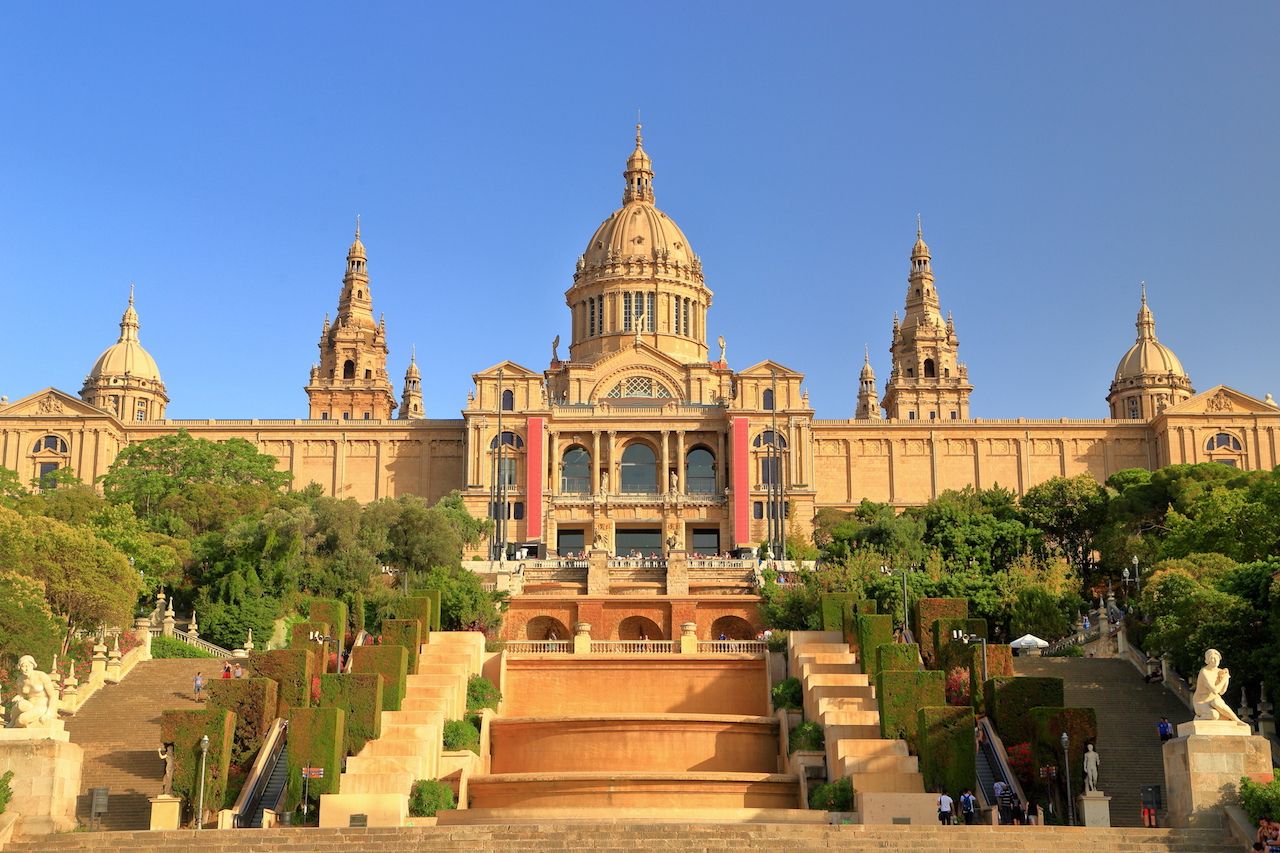 Is there a more magnificently situated museum anywhere in Europe than the Museu Nacional d’Art de Catalunya (MNAC)?

Housed in the Palau Nacional (National Palace), the Museu Nacional d’Art de Catalunya (MNAC) sits magnificently atop Montjuic hill, its dome inspired by St Peter’s in Rome and its four towers by the Cathedral of Santiago de Compostella. A grand double staircase leads visitors up past decorative fountains and from the terrace cafe at the top there are stupendous views over the city and surrounding hills.

Inside, the “Wow!” factor continues, with 50,000 square metres of exhibition space divided into four sections: Romanesque Art (the world’s finest collection, notably a unique ensemble of 11th to 13th century mural paintings); Gothic Art (especially altar pieces, sculpture and decorative pieces); Renaissance and Baroque Art (including works by Titian, Tintoretto, Cranach, El Greco, Velazquez and Rubens); and Modern Art (including the most important collection of Catalan art from the 19th century to the 1940s).

On the other side of the hill in the Parc de Montjuic, the Fundacio Joan Miró houses the most comprehensive public collection of work anywhere in the world by Barcelona’s favourite son. Often seen as the precursor of Abstract Expressionism, Miró (1893-1983) referred to his style as an “assassination of painting” aimed at upsetting the visual elements of established painting. From his early, figurative depictions of rural scenes in northeast Spain, he went on to develop a Surrealist language of symbols and fantastic imagery, using the brilliant colours of his native Catalonia to express a feeling of freedom and energy. 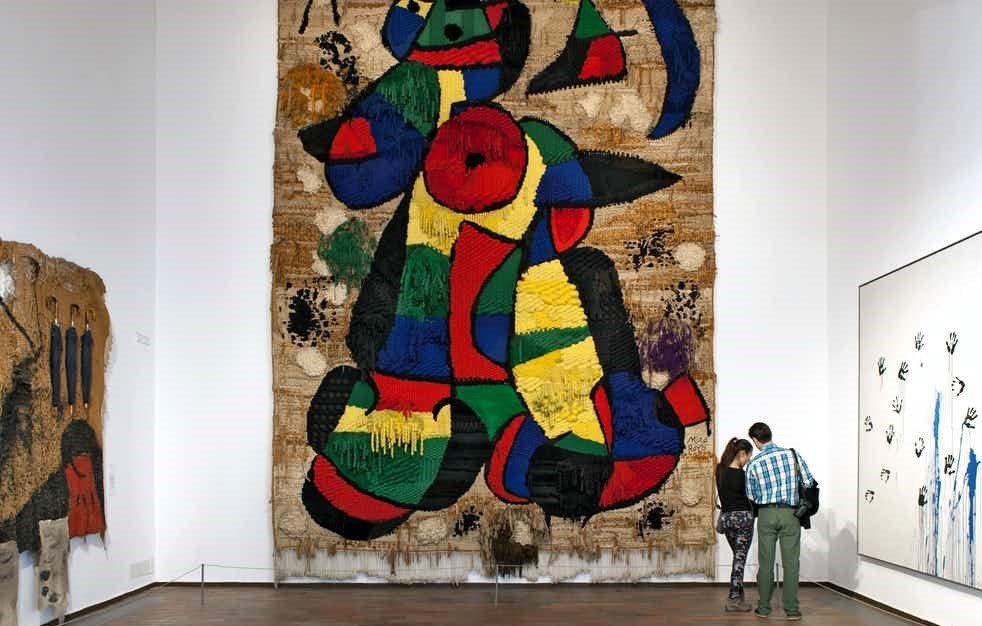 Over 300 paintings, 150 sculptures, 8,000 drawings, the complete graphic works, textiles, letters and documents detail the artist’s creative process. There is also a changing programme of exhibitions of contemporary work by other artists. After seeing the displays, head for the cafe-restaurant, where there are spectacular views of the city from the terrace. You may also want to visit Miro’s grave in the nearby Montjuic cemetery. (See also Finding Miro.)

In the Raval district a few blocks from the city’s Gothic centre is the Museu d’Art Contemporani de Barcelona (MACBA. Taking up one side of the Plaça dels Àngels (Angels’ Square), the gleaming, white, modern building, with its ground to roof glass facade flooding the interior with light, stands in contrast to the surrounding traditional architecture and narrow streets. 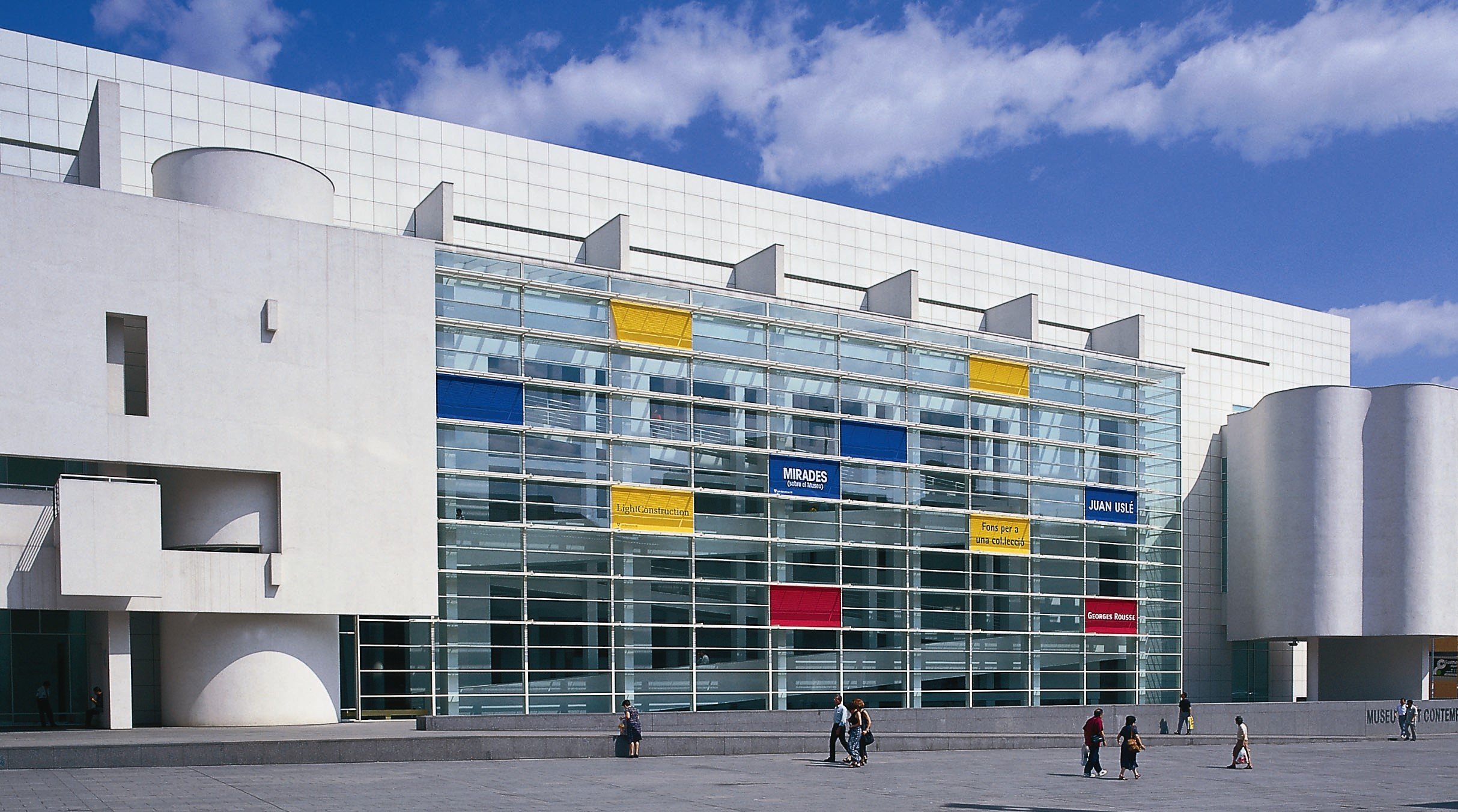 MACBA’s permanent collection represents three periods – the 1940s to the 1960s, the 1960s and 1970s and the contemporary era – each one displayed on its own floor in regularly changing exhibitions. The ramp between floor offers ascending views of the surrounding area and to an annex space, Monument, on the other side of the square in the atmospheric cloister of a former convent.

Round the corner from MACBA is the Centro de Cultura Contemporánea de Barcelona (CCCB), which hosts exhibitions on the core theme of the city and urban culture. Entered from the street through an archway, its beautiful inner courtyard comprises the original 1802 building (a former almshouse) on three sides, with a modern, 30-metre high, glass-fronted wing on the fourth side reflecting the entire scene like a massive projection screen. The CCCB is a multi-disciplinary institution, so during your visit you may also come across music, film, dance, lectures and readings.

The Catalan artist Antoni Tàpies (1923-2012) was perhaps the most celebrated Spanish artist to emerge in the post-WWII period. Originally a surrealist painter influenced by Paul Klee and Joan Miró, he is best known for his ‘pintura matèrica’ (matter painting), in which non-artistic materials are incorporated into the paintings such clay, marble dust, waste paper, string and rag. Created by the artist himself to promote contemporary art, the Fundació Antoni Tàpies occupies an 1880s building which is a fine example of Catalan Modernism, the region’s contribution to Art Noveau architecture. 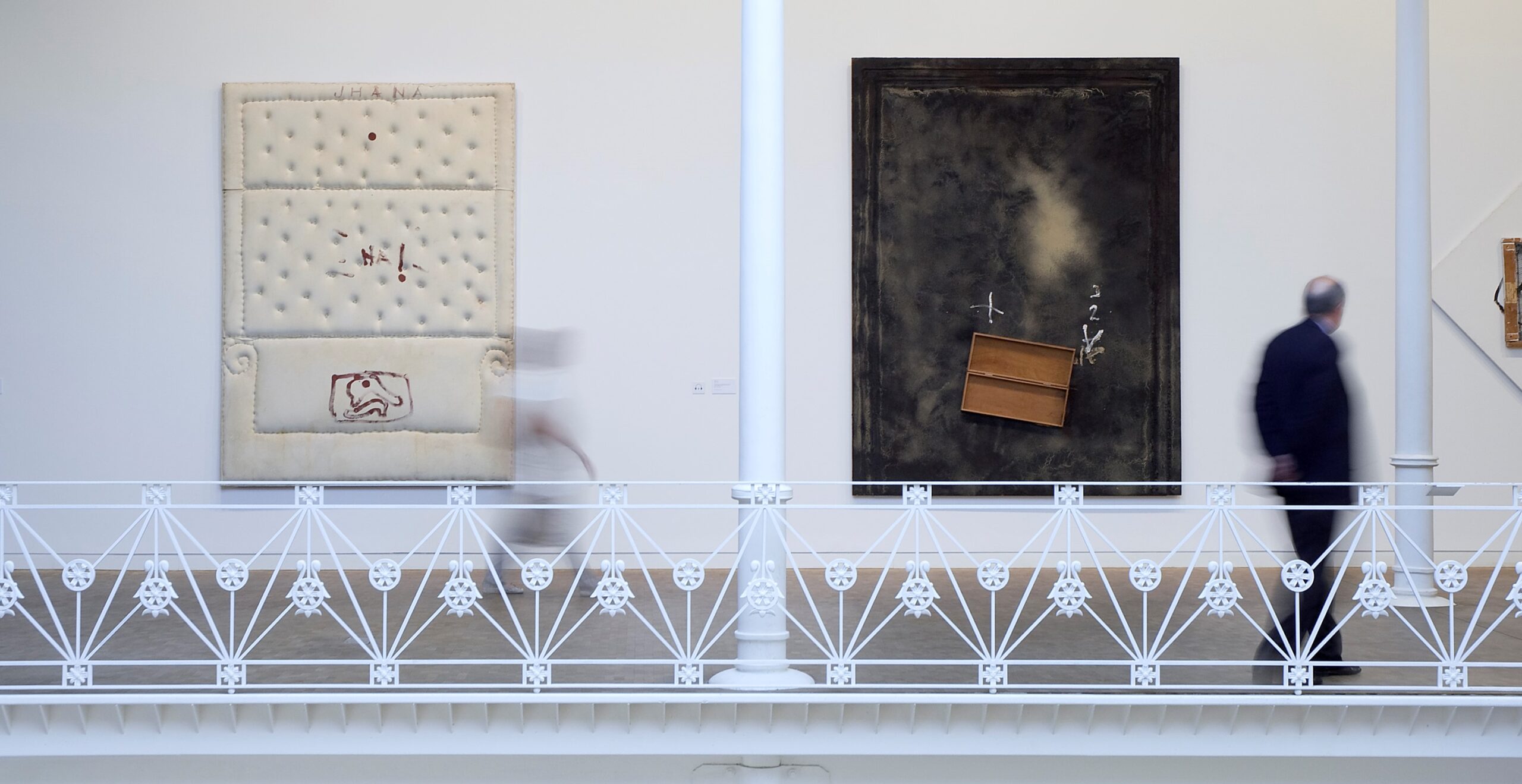 The foundation has one of the most complete collections of Tàpies’ work. comprising paintings, drawings, sculptures and engravings. These are shown on the spacious first floor, while two lower floors are dedicated to changing exhibitions of work by other artists. Over the years these have included Louise Bourgeois, Merce Cunningham, Andy Warhol, Francis Picabia and Robert Motherwell.

The Museu Picasso in the La Ribera (The Shore) district greets over a million visitors a year, making it Barcelona’s most popular art gallery. Housing one of the world’s largest collections of the artist’s work, arranged in chronological order, it provides a fascinating insight into his creative development. The first museum anywhere dedicated to Picasso’s work and the only one created during his life, it occupies five large Gothic townhouses dating from the 15th to the 18th century. 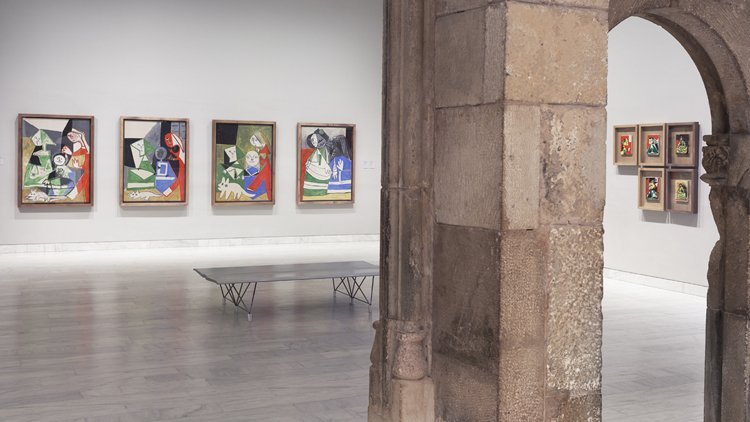 Starting in the 1890s, when Picasso was in his early teens, the permanent collection is organised into three sections: painting and drawing, engraving and ceramics, the latter comprising over 40 pieces from his days in Vallauris in the south of France, where he first learned to work with the material. The collection ends with a burst of colour with almost 60 works interpreting Velazquez’ masterpiece Las Meninas (The Maids of Honour). Made in 1957, it is the only series of works painted by Picasso which are displayed all together in one museum.

Joan Miro (1893-1983) has left his imprint on the city of his birth. Art-lovers can walk the bustling streets of the old Gothic quarter which Joan Miró knew as a child and visit some of the places associated with him, including the apartment in which he was born (appropriately, above what is now an art shop), the site of his first retrospective exhibition and one of his favourite restaurants. You can even drink to his health with a cocktail named after him. As you wall around, look out also for the Miro-designed logo on Caixa banks. 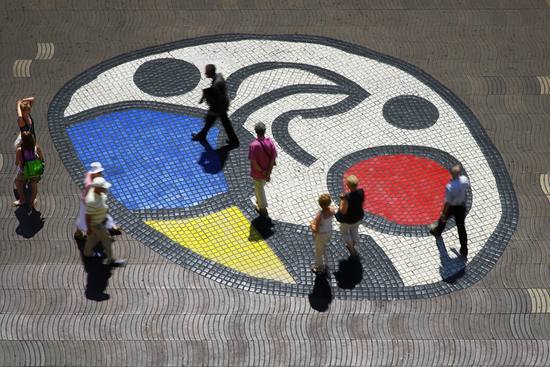 A good place to start is half-way down Barcelona’s most famous thoroughfare, La Rambla (riverbed), where you will usually find a cluster of tourists at the Pla de l’Os (literally, the ‘plain of the bone’) snapping photographs of Mosaic, a large, colourful circular piece which Miró built into the pavement in 1976 to greet visitors arriving by sea. (La Rambla leads up from the port.) Shaped like the cosmos and bursting with the sun, constellations and the planets, Mosaic is in the recurring colours of many of Miro’s works: blue for the sea, yellow for earth and red for passio. Mosaic is one of three public artworks he dedicated to the city. The others are Woman and Bird, a 30-metre high sculpture in the Parc Joan Miró, and a mural at the airport’s Terminal 2 to welcome people arriving by air. 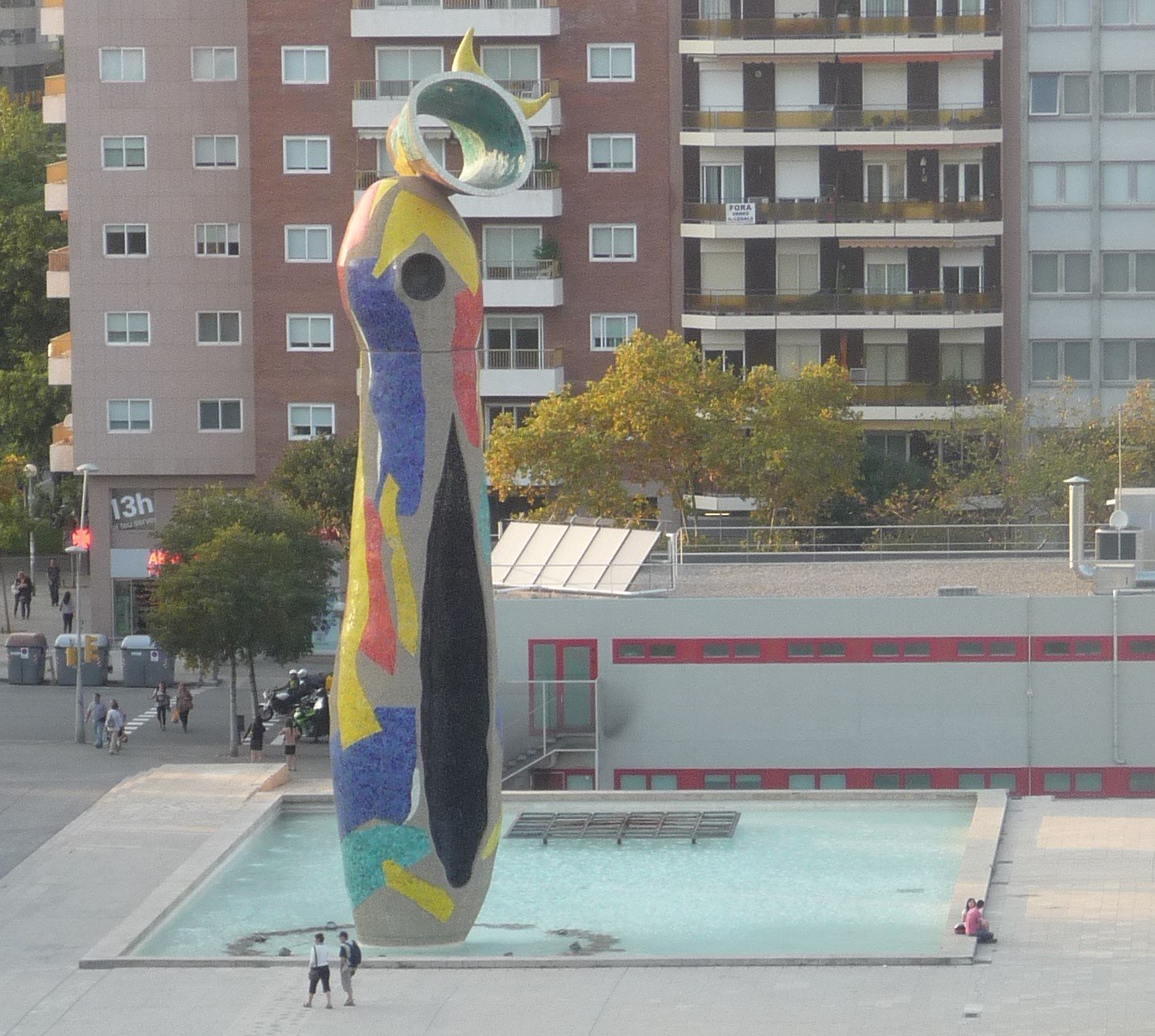 A few minutes from La Rambla is the Antic Hospital de la Santa Creu, where Miro had his first retrospective exhibition in Spain in 1968. So unrecognised was he in his own country, especially in view of his opposition to Franco, that he had to wait till the age of 75 to see it. One of the hospital’s last patients was another of Barcelona’s famous sons, Antoni Gaudí, who died there in 1926 after being struck by a tram. (See Getting Gaudi.) The complex now houses a number of cultural institutions, including an exhibition space for contemporary art.

Off the Carrer de Ferran (where the streetlamps are fashioned after the earrings of the designer’s mother in law) is Pasaje del Credito. Miro was born here in a first floor flat above what is now, fittingly, the Artevistas art gallery. At number 4 Carrer de Cucarulla was the top floor art school which Miro attended, while nearby on the Calle Montsio is the atmospheric Else Quatre Gats (The Four Cats) bar and restaurant, where he attended drawing classes and met artist friends, including Gaudi. 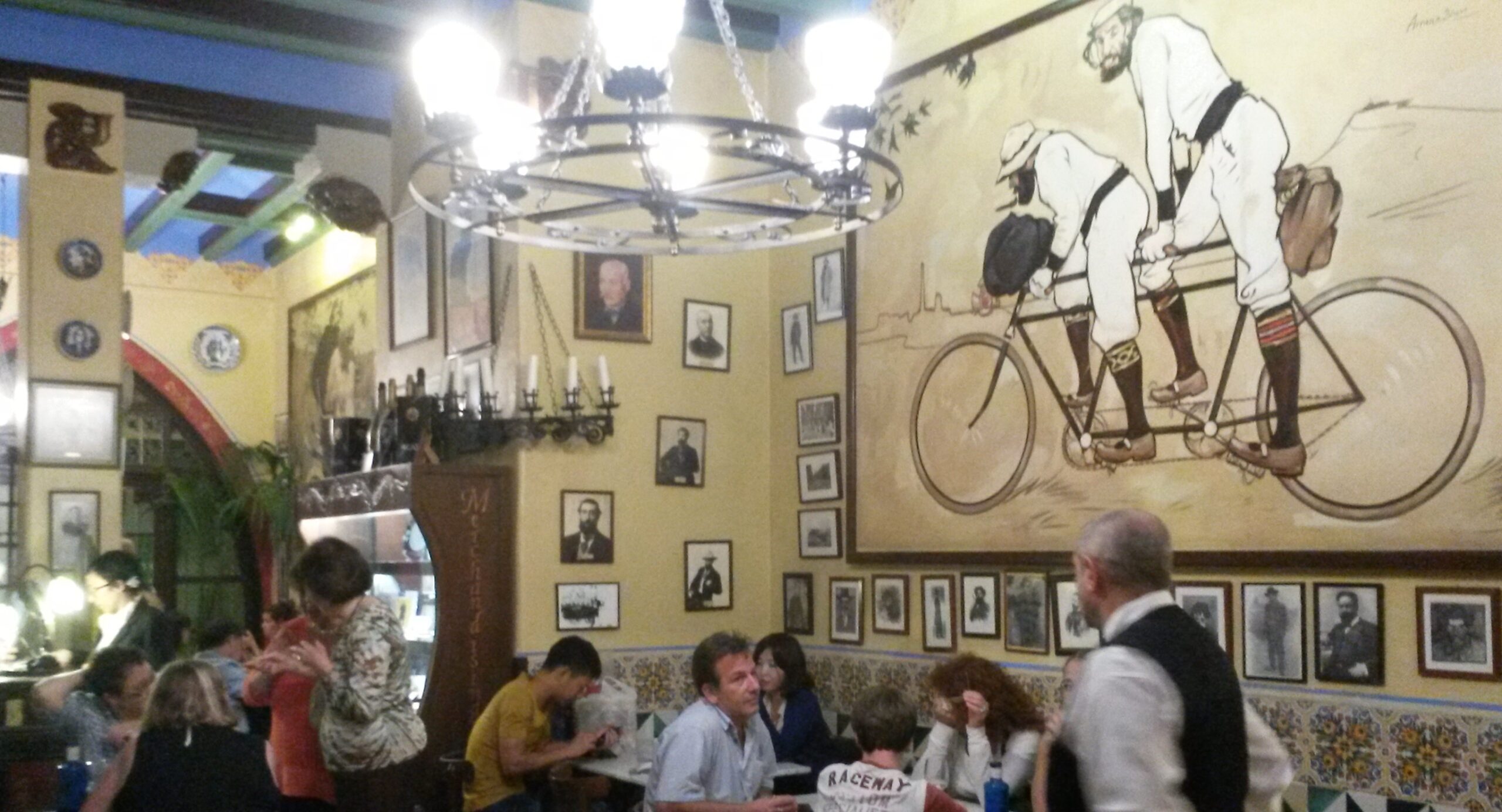 A copy of ‘Ramon Casas and Pere Romeu on a Tandem‘ by Ramon Casas hangs in the Else Quatre Gats restaurant, for which it was painted. The original hangs in the Museu Nacional d’Art de Catalunya. The image features on the restaurant’s placemat, which makes a nice souvenir.

After a day following in Miró’s footsteps, head for the Bar Boadas just off the top of La Rambla. Established in 1933, making it the oldest cocktail bar in Barcelona, it is famous for its Miró cocktail, a mix of whisky, red vermouth and Cointreau. The walls are covered with memorabilia and celebrity photographs, and a framed letter from Miró proclaims: ‘I want my works to be a poem with music from a painter.’ 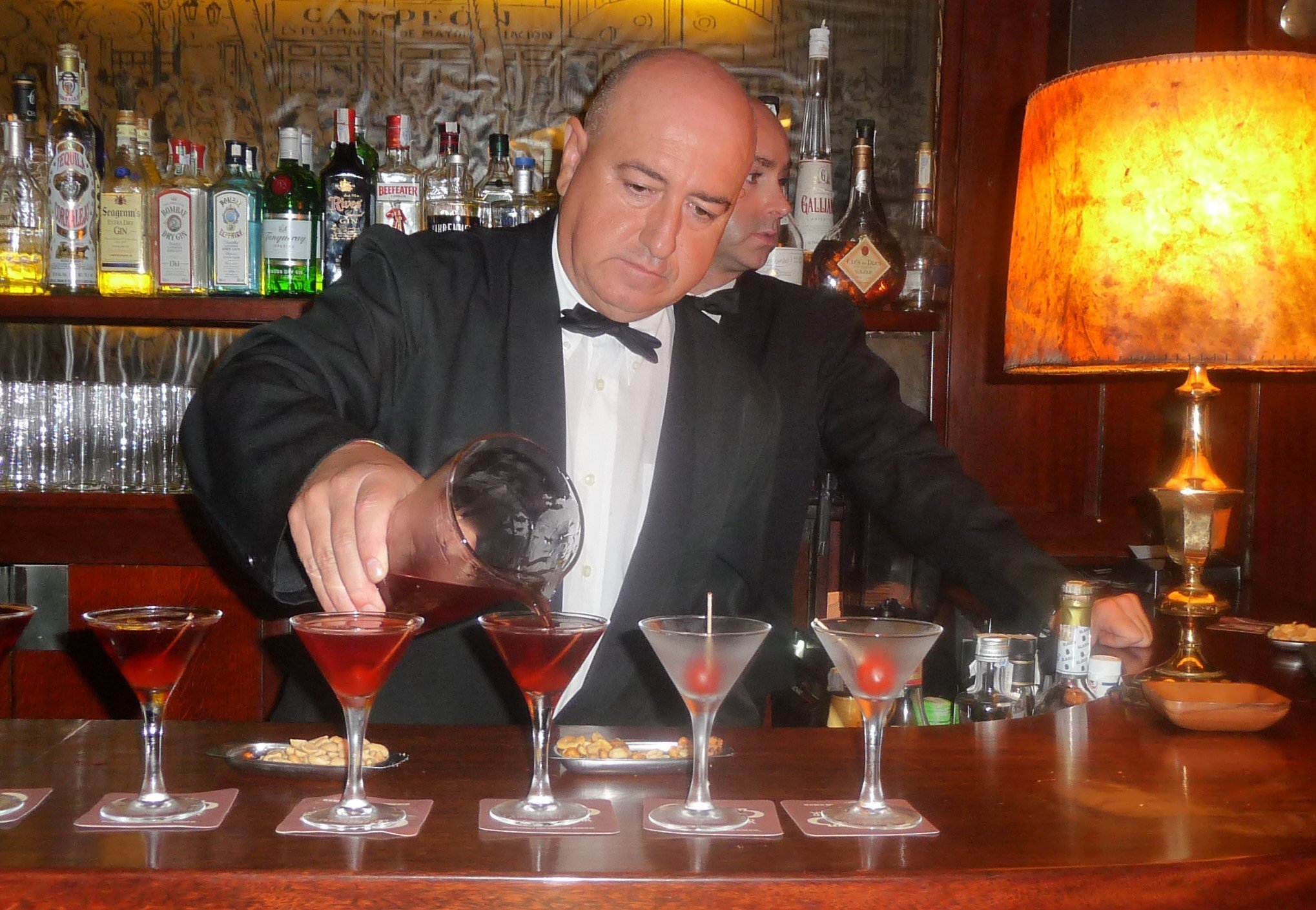 Barcelona’s other favourite son is the architect Antoni Gaudi (1852-1926), whose attempts to recreate nature with bricks and mortar (not to mention crazy paving, shards of tile, broken marble, smashed up cava bottles and other materials) have split observers of his built legacy in Barcelona. Are his creations kitsch or visionary, freakish or pioneering, grotesque or transfixing? You can decide for yourself at his two most visited buildings.

Originally built in the early 1900s as a luxury apartment building (with the world’s first drive-in garage). Casa Mila, better known as known as La Pedrera (The Stone Quarry) is one of Barcelona’s best loved buildings, its undulating lines echoing the Mediterranean and its craggy facade resembling the nearby hills. A museum in the arch-ceilinged attic explains Gaudi’s approach to architecture complete with models, while stepping out onto the rooftop’s fairytale landscape is like visiting the set of a Tolkien movie. 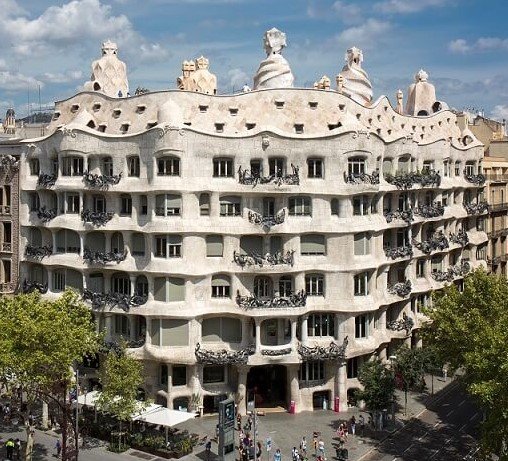 Some buildings are deservedly called jaw-dropping, none more so than La Sagrada Familia (The Holy Family), the basilica which constituted Gaudi’s life’s work (he dedicated over 40 years to the project and is buried beneath the nave) and is variously described as ‘religious theatre’ and ‘a concert of stone’. Incredibly, it has been under construction since 1882 (providing safe jobs for generations of workers) and it is hoped to be completed in time for the centenary of Gaudi’s death in 2026, when it will become the highest building in the city. 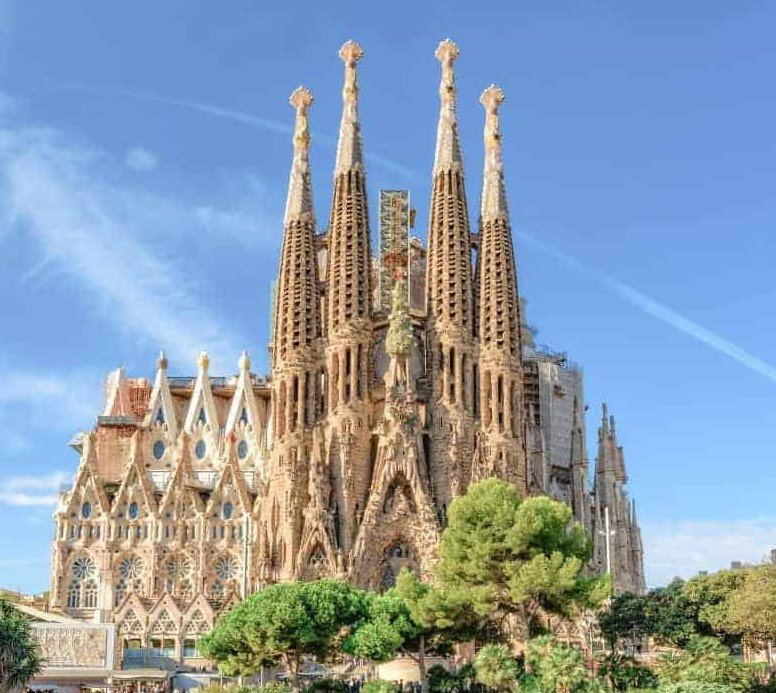 In the style of the great Gothic cathedrals, the sheer scale is awe-inspiring and its organic nature, with sculptures of flora, fauna, human figures and even bones protruding from seemingly every surface, makes it appear to grow before your very eyes. If you can peel yourself away from the main floor, you can go to the top of one of the towers or down into the basement, where there is an exhibit on the history of the construction and plaster cast models of the sculptural work.