From ancient artefacts to contemporary works, Athens museums cover the history of art

Athens is Europe’s oldest city and while its ancient past dominates much of its art and craft, it has also had an enduring influence on modern work. It is hardly imaginable, for example, that 4,000 years separate a Neolithic figurine from the Cyclades from a nude by Modigliani. While showcasing its early culture, the cradle of modern civilisation is also looking to the future, with the renovation and extension of one major art museum and the birth of another.

A great starting point is the Acropolis Museum, which stands at the foot of the famed citadel like a sleek, modern take on the Parthenon above it. Leading up to the main exhibition level, a sloping, glass-floored ramp gives visitors a look down into the archaeological excavation under the building. It’s actually called the Gallery of the Slopes, alluding to the ascent to the Acropolis (high city), where many of the museum’s artefacts were found.

Many of the wondrous works on display have influenced art right up to the present day. They include friezes, statues, scenes from myths and legendary battles, columns, vessels, pediments, figurines, objects from everyday life and renderings of fabrics and clothes.

A short distance away near the foot of the Acropolis, the Ilias Lalaounis Jewellery Museum is housed in what was the original workshop of the Athens-born jewellery designer (1920-2013) whose work was inspired by ancient Greece and is now sold in boutiques around the world. He is the only jeweller to be inducted into France’s Académie des Beaux-Arts.

The museum’s permanent collection includes more than 4,000 pieces of jewellery and ‘micro-sculptures’ from over 50 collections designed between 1940 and 2000, ranging from reproductions of antiquities to minimalist, modern pieces. There are also temporary exhibitions and demonstrations on the ancient art of goldsmithing.

A couple of blocks apart on Vasilissis Sofias Avenue near the city centre are two outstanding private museums specialising in ancient art. Describing itself as ‘the museum of Greek civilisation in all its manifestations’, the Benaki Museum of Greek Culture was the first privately owned museum in Greece, combining Hellenic culture with collections of Islamic and Chinese art and craft.

Housed in a 19th century villa, the Greek collection is considered one of the most important of its kind in the world. Comprising some 40,000 items ranging from antiquity to the foundation of the modern Greek state, it includes figurines, amphoras, jewellery, statues, fabrics, funeral objects, religious icons, costumes, metalwork, wood carvings and shrines. More modern works include some 6,000 paintings and drawings, mainly by 17th to 19th century European artists, as well as works by Greek artists of the 19th and 20th centuries. (The Benaki Museum also has a contemporary ‘sister’ gallery. See Pireos 138.)

Nearby, the Museum of Cycladic Art is dedicated to the ancient cultures of the Aegean and Cyprus, with special emphasis on art originating from the Cyclades, a scatter of Mediterranean islands southeast of the Greek mainland. The world’s largest collection of its kind, it includes figurines, vessels, jewellery, glasswork, coins, seals, pottery and reliefs. There are also dramatised, audio-visual presentations depicting scenes from daily life in antiquity.

The Cycladic culture flourished between 3,200 and 2,000 BC, when craftsmen used the island’s abundant mineral resources, such as obsidian, copper, silver and marble, to produce exquisite objects. Their influence is seen in 20th century work by the likes of Brancusi, Picasso, Modigliani and Henry Moore, who said: “I love and admire Cycladic sculpture. It has such great elemental simplicity.” The museum also has a contemporary art exhibition programme showcasing 21st century artists.

In its beautiful, neoclassical building complete with a garden decorated with sculptures, the National Archaeological Museum is the largest museum in Greece and among the finest in the world. Spanning prehistory to late antiquity, the rich collection of Greek artefacts is undisputably the best in existence. The head-spinning array of treasures ranges from Mycenean gold cups, statuary and terracotta figures to jewellery, artfully painted vases and intricately detailed frescoes, including many items from Egypt and the Near East. As with the Acropolis Museum, their enduring influence on art and craft through the ages is unmistakable.

The city’s newest art museum is the Goulandris Museum of Contemporary Art, built specially to house the Basil and Elise Goulandris Foundation’s world class collection of Impressionist, Modernist and post-war art. (Basil belonged to a famous shipping dynasty and his twin brother Nicholas founded the Museum of Cycladic Art.) Opened in October 2019, the museum has given Athens its first look at work by European masters such as – deep breath – Cezanne, Van Gogh, Gauguin, Monet, Degas, Modigliani, Rodin, Picasso, Braque, Miro, Bacon, Chagall, Giacometti, Toulouse-Lautrec, Bonnard, Kandinsky, Klee and Ernst alongside works by leading Greek painters. Together they make up one of the world’s most valuable private collections.

The museum has been 30 years in the making and exemplifies how the past can affect the present. On the site which was originally intended for it (under the supervision of the “starchitect” I.M. Pei, famous for his glass pyramid outside the Louvre in Paris), workers unearthed Artistotle’s Lyceum, one of the famous philosophy schools of ancient Athens, where the man himself once taught. Barred from developing the site, the Foundation eventually settled in its neo-classical mansion and adjacent buildings. Highlights include: Van Gogh’s Olive Picking (1889), made during his stay in an asylum in the south of France; Picasso’s Nude With Raised Arms (1907), also known as the Avignon Nude; one of many paintings of Rouen Cathedral by Monet; and Rodin’s brass sculpture Eternal Spring (1884).

The National Gallery (officially, the Alexandros Soutzos Museum after its main benefactor) has the world’s largest collection of Greek art dating from the post-Byzantine era to the present day along with work by western European artists, among them Bruegel, Caravaggio, Goya, Tiepolo, Delacroix, El Greco, Matisse, Rubens, Rodin and Picasso.

The gallery reopened in 2021 after extensive renovation and the addition of a new wing dedicated to Greek artists, which effectively doubled its size. You won’t fail to see the monumental ‘People’s Market’ by the Greek colourist Panagiotis Tetsis. Also, be sure to visit the National Sculpture Gallery in a nearby park. The museum is down the street from ‘Dromeas’ (‘The Runner’), a remarkable, 12-metre high glass sculpture by Costas Varotsos. 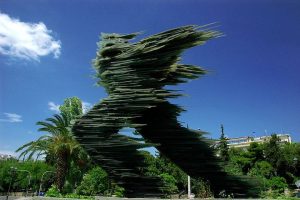 On the long, busy avenue leading out to the port of Piraeus, Pireos 138 (which is also its address) is the contemporary art annex of the Benaki Museum. The block-long building in a regeneration area has been transformed from a 1960s car showroom. The red marble monolith has a spectacular, soaring central atrium surrounded by huge, moveable blinds and a stainless steel mesh, throwing a criss-cross pattern of light and shade across the central courtyard.

Located in a renovated former brewery, the National Museum of Contemporary Art has a sizeable collection of international artworks. The only national institution in Athens focused on collecting and exhibiting contemporary Greek and international art, its collection encompasses Architecture and Industrial Design, Painting and 3D Works and Photography and New Media. There are expansive views of the city from the museum’s roof garden, which also hosts open-air exhibitions.

Perhaps the most significant contribution ancient Athens made to art is in sculpture, which evolved during the city state’s Golden Age of the 5th century BC into what we might call art. Athenian sculptors such as Myron and Phedias were the first to master natural-looking flesh and muscle, enabling more expressive works. From the Romans to the Victorians, Greek sculpture was widely imitated and today marble copies (many bronze originals were melted down) can be seen in museums throughout the world.