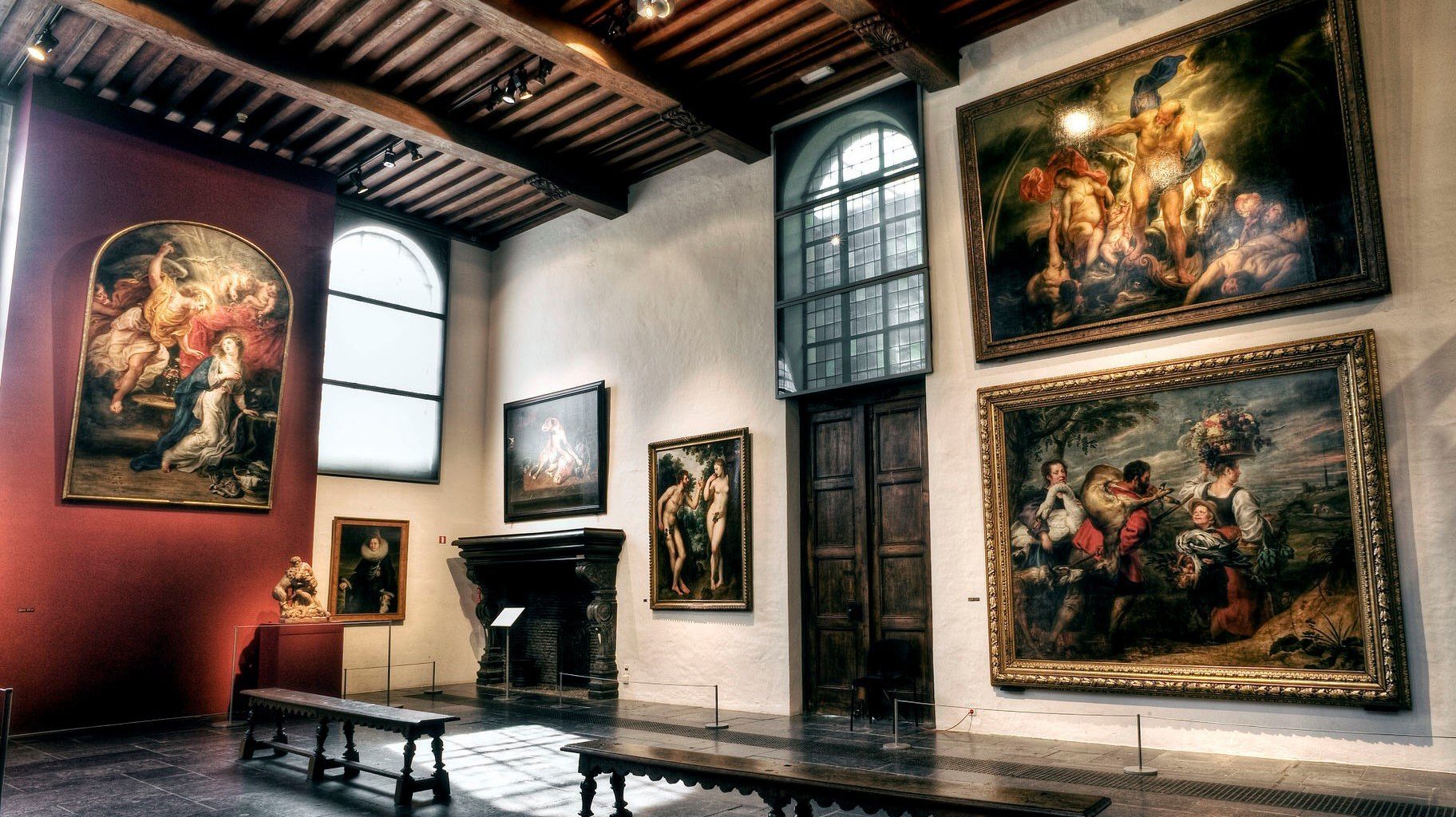 The city of Rubens also has Bruegel, Baroque and beyond 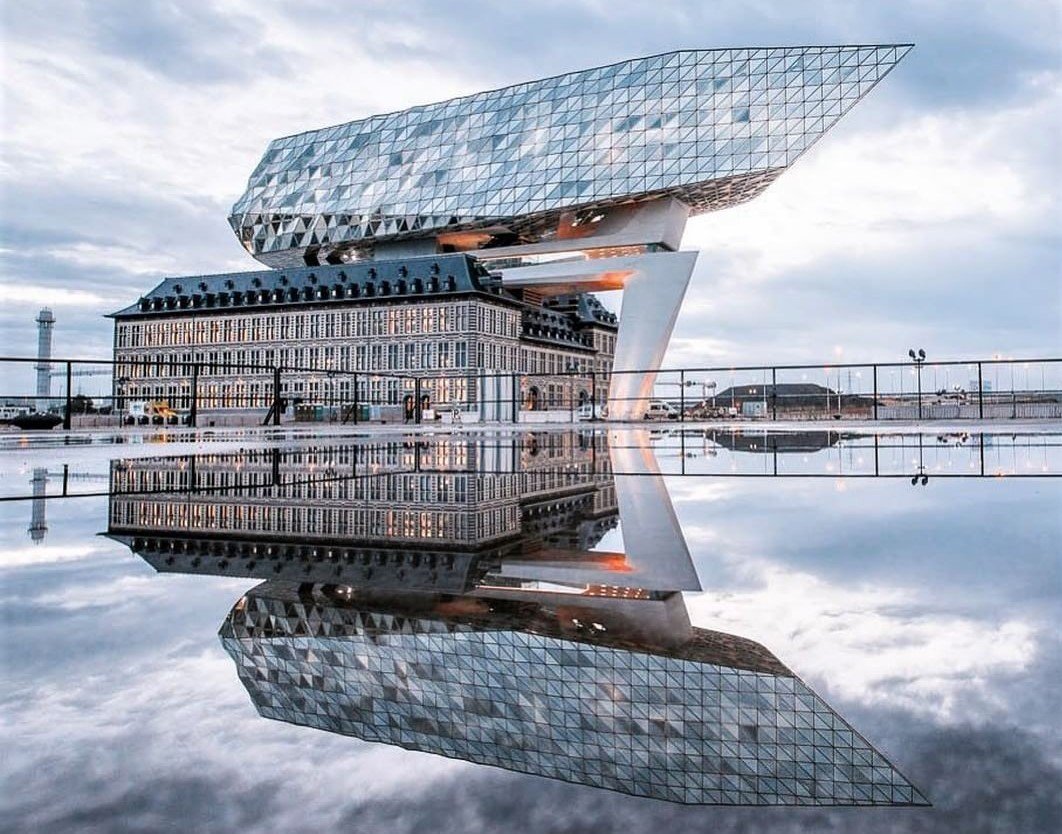 Once upon a time a giant standing on the bank of the River Scheldt as it flowed towards the North Sea demanded a toll from passing boatmen. He would sever a hand of anyone who failed to pay and throw it in the river. When a city was established there, it would be named Antwerpen from the Dutch ‘hand werpen’: to throw a hand.

Antwerp grew up to become Belgium’s second city after Brussels and Europe’s second largest port after Hamburg, famous as a trading centre (it established the world’s first stock exchange in 1531) and the world’s diamond capital (85 percent of all rough diamonds pass through it annually). With its history as one of the most powerful mercantile cities in northern Europe, Antwerp’s sponsorship and appreciation of the arts runs deep.

The city’s favourite son is Peter Paul Rubens (1577-1640). What Mozart is to Salzburg or The Beatles to Liverpool, so Rubens is to Antwerp. There are more than 50 Rubens masterpieces on permanent display. He also designed his own home of 25 years, where he produced the bulk of his work. The Rubens House is influenced by the ornate Baroque style which flourished in Europe from the early 17th to the late 18th century. The palazzo-style house is one of the best known artist’s homes in the world, where you can come closest to his living environment. 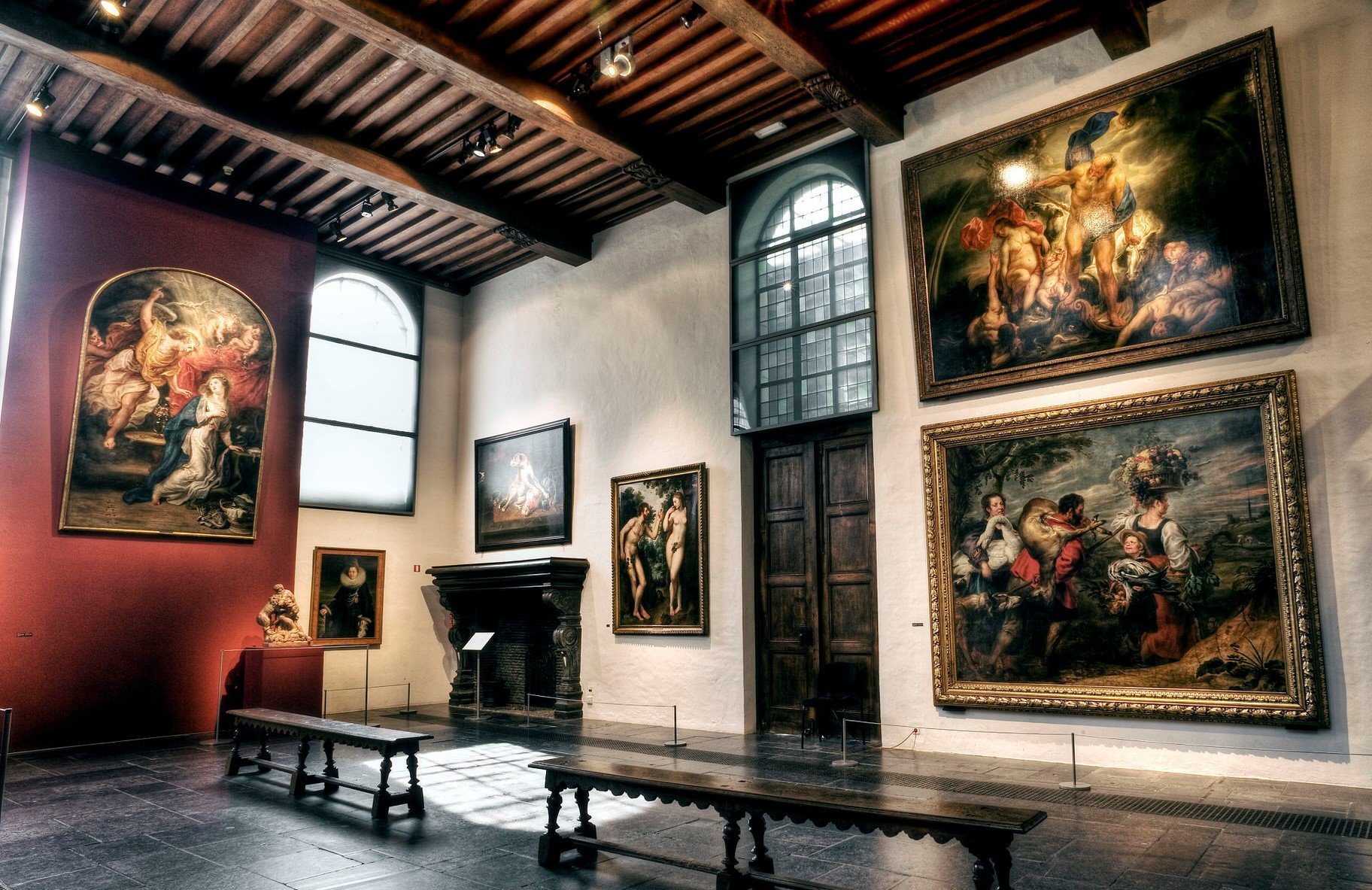 Rubens spent almost a decade living and working in Italy, and its influence is clearly seen in the portico, which is based on a Roman triumphal arch, and the central passageway, borrowed directly from a gate designed by Michelangelo. The permanent collection of mythological scenes, landscapes, religious tableaux and portraits includes one of only four self-portraits in existence. There is also a delightful garden. The city celebrates the artist at the annual Rubens market festival around the Grote Markt, when stall-holders dress in period costume.

After an 11-year, €100 million makeover the Royal Museum of Fine Arts Antwerp reopened in autumn 2022 to take its place among Europe’s finest. First opened in 1890 in its imposing, neoclassical building and known by its Flemish acronym KMSKA, it has re-emerged as a pleasing blend of restored historical rooms, with their soaring stucco ceilings and parquet floors, and bright, daylight-filled new galleries where once were patios and courtyards, resulting in 40 per cent more exhibition space. The feeling is of visiting two museums in one. 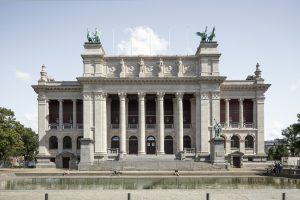 A veritable temple of art beloved by generations of Antwerp residents, the KMSKA houses almost 6,000 objects, including around 2,400 paintings, 700 sculptures and 2,700 drawings and prints. Offering an almost complete overview of Flemish and Belgian art, the collection ranges from the great 15th ‘Primitives’ such as Jan van Eyck and Hans Memling to 20th century greats like James Ensor and Rik Wouters. A special place is reserved for Rubens, while the leading Belgian surrealist Rene Magrritte makes a few cameo appearances. 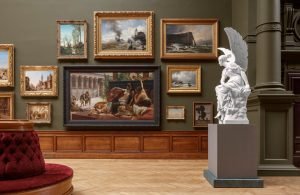 The collection in the Museum Mayer van den Bergh was amassed by Fritz Mayer van den Bergh (1858-1901), a Belgian art enthusiast who favoured Gothic and Renaissance art, particularly by Dutch and Flemish artists. The centrepiece work – the museum’s Mona Lisa, if you like – is Bruegel’s Mad Meg (1562), which van den Bergh bought at auction in Cologne in 1897 for a nominal sum. By the late 1850s Flemish art was considered old fashioned and could be bought cheaply. Believed lost at the time, Mad Meg turned out to be the purchase of Fritz’s life and led to a Bruegel revival. A methodical researcher, he collected some 6,000 works, of which 60 are on the masterpiece list.

The museum has a poignant back story. It would probably not exist at all were it not for Fritz’s untimely death in a riding accident. His wealthy mother built a neo-Gothic house in the banking district and opened it as a museum to show the expansive collection in tribute to her son. 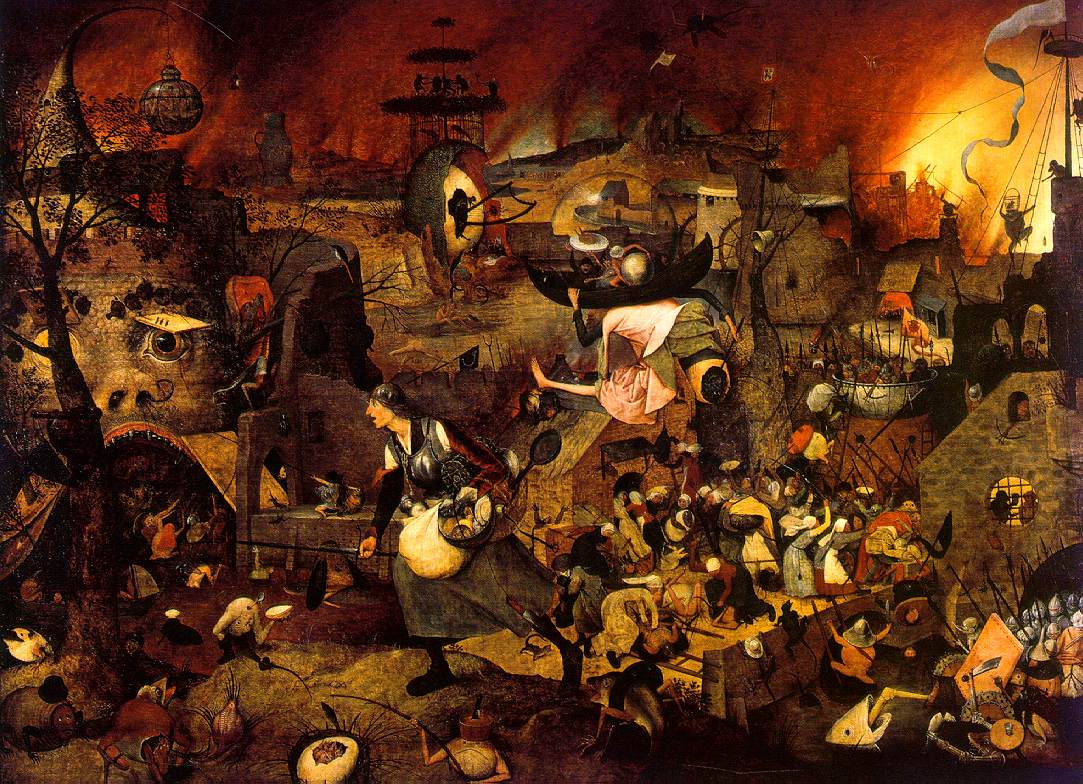 Antwerp’s largest museum, the Museum aan de Stroom (literally, ‘museum by the flow’ and known locally MAS) is a reddish sandstone and glass monolith constructed from a series of giant boxes stacked one on top of the other. The architecture is inspired by the 19th century warehouses which once stood on the site. The exterior is adorned by over 3,000 hand-shaped medallions, a nod to origin of the city’s name. 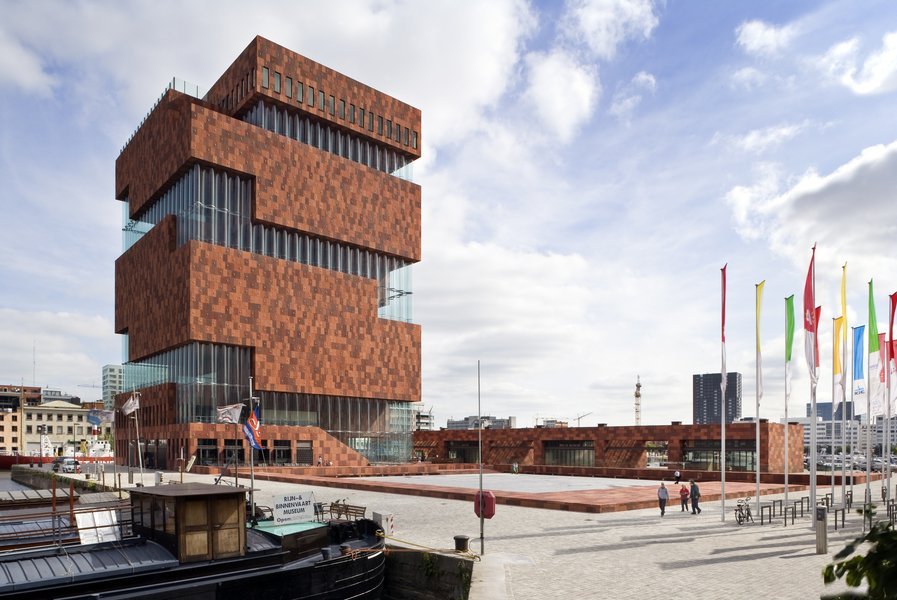 The museum’s permanent collection of 500,000 pieces tells the story of Antwerp’s connections with the rest of the world through themes such as power, food, world port and life and death. There is also a fine collection of Pre-Columbian art. While making your way up and down the building, look out for Luc Tuymans’ Dead Skull mosaic in the museum square below (best viewed from the fifth floor), while on the eighth floor be sure to wave to Guillaume Bijl’s The Saluting Admiral Couple, a larger than life pair perched outside on a ledge and decked out in full naval regalia.

The Rockox and Snijders House comprises two adjacent patrician houses which have been merged to form Antwerp’s latest museum. Nicolaas Rockox was a wealthy lawyer and collector. A close friend of Rubens (you can see the earliest known portrait of him, by Otto van Veen, in the Rubens House), he was mayor of the city for nine terms. Living next door was Frans Snijders, a celebrated Baroque artist famous for his hunting scenes, market scenes and still lifes. Rubens regularly relied on him to execute sections of his paintings. 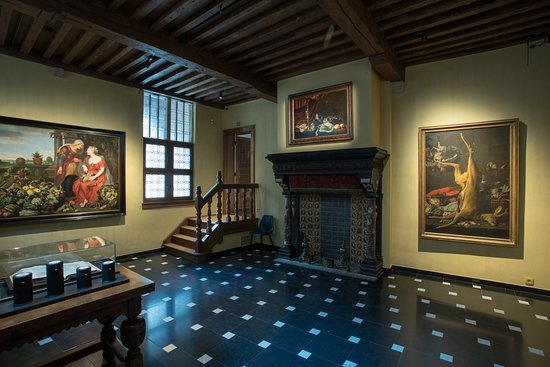 Imbued by the atmosphere of the period, the conjoined houses present a wonderful display of works by Snijders and other artists who enjoyed Rockox’s patronage and including still lifes (especially of flowers, food and game), religious tableaux, hunting scenes, portraits, landscapes and furniture.

The 16th century saw the emergence of many new types of book. This was due in large part to publishers such as the Plantin-Moretus family, whose new ways of how texts could be typeset more effectively and in relation to images led to the form that we know today. The world’s only printer-publishing house which has been preserved from the Renaissance and Baroque eras, the Plantin-Moretus Museum, a UNESCO World Heritage Site, pays tribute to all book designers, especially Peter Paul Rubens. A fully decorated patrician’s home, the museum includes furniture, tapestries, gold and leather walls, paintings, sculptures and porcelain as well as prints and drawings by Antwerp masters. The creaking floorboards only add to the atmosphere. 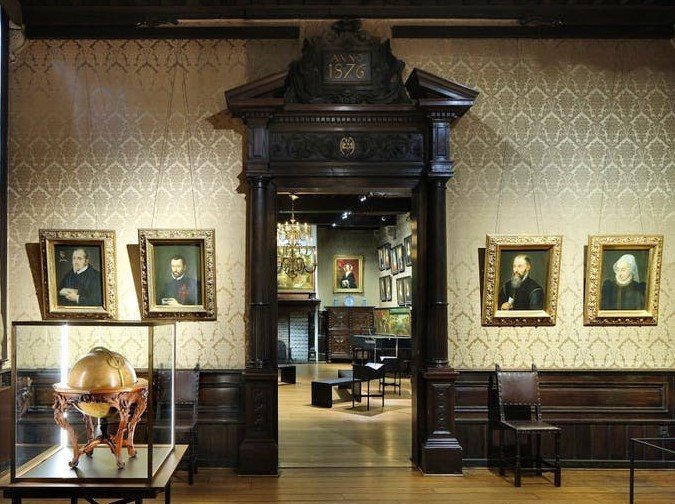 Highlights include the two oldest known printing presses in the world, original lead type fonts, a Gutenberg bible and antique maps, manuscripts, books and prints. There is also a delightful inner garden. If printing is not your thing, it’s still worth stopping by to see the building’s extraordinary facade.

Housed in former shipping company premises overlooking the River Scheldt, the Museum De Reede focuses on works on paper, including lithographs, engravings, etchings, woodcuts and drawings, by three masters: the Spanish Romantic Francisco Goya, the Belgian Symbolist Felicien Rops and the Norwegian Expressionist Edvard Munch. These are shown along with graphic works by other international artists, notably Käthe Kollwitz, and Belgian artists such as Rik Wouters, Hugo Claus and Antwerp-based Fred Bervoets. There are also occasional temporary exhibitions. 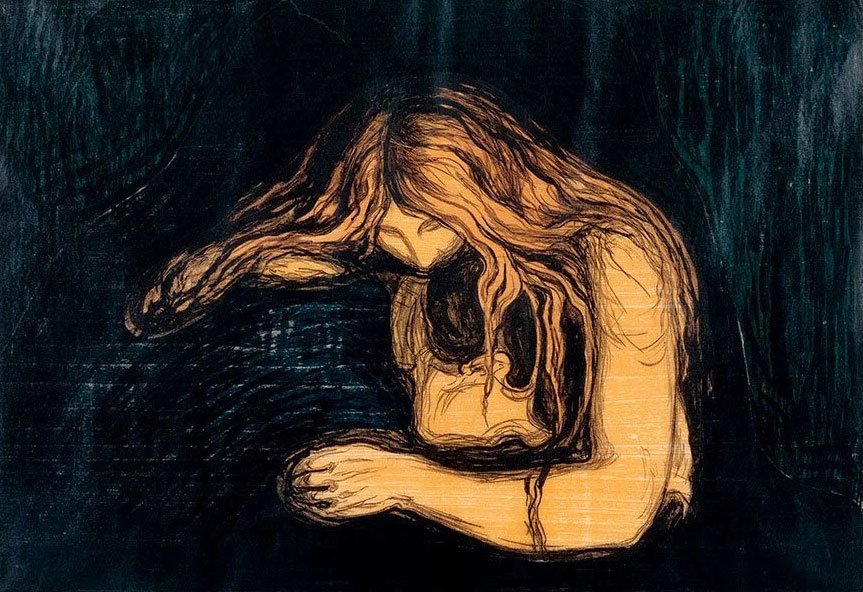 In the up and coming Zuid district are two museums well worth the short tram ride from the city centre. Housed in a former grain silo, the renovated Museum of Contemporary Art (the Museum van Hedendaagse Kunst Antwerpen, or MHKA, commonly known as ‘Mooka’) has a permanent collection of contemporary art from Belgian and international artists from the 1960s onwards, including from regions lesser known for their art scene, such as Central Asia, North Africa, China and India. 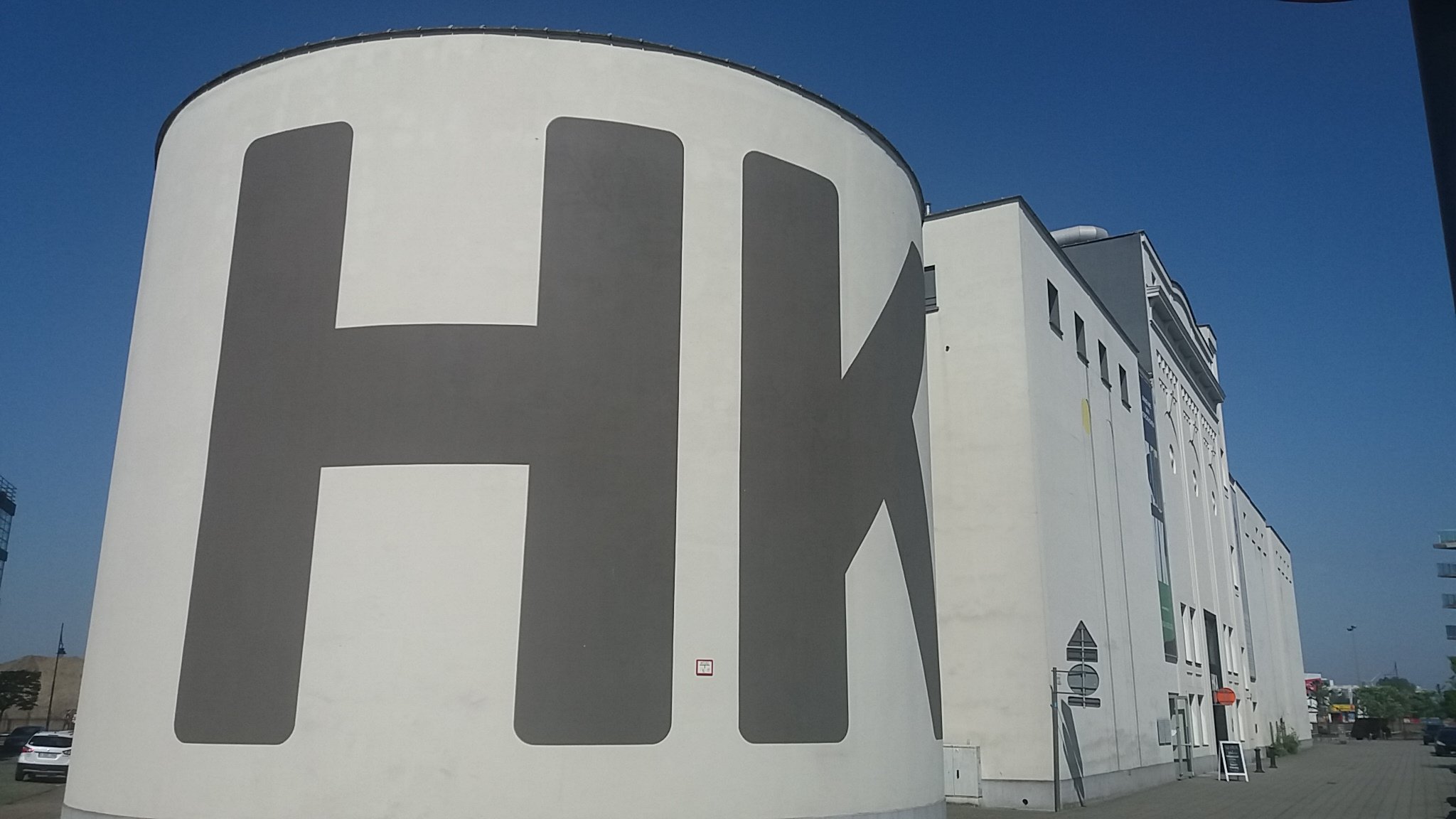 A few hundred metres away is the Fotomuseum, or Fomu, where a former warehouse is home to an historical and contemporary collection of photography, including artistic photos, photo-journalism, scientific photos, documentary photos and fashion photography.

Do take the bus or tram ride to the city’s southern outskirts, where art and nature interact in the outdoor Middelheim Museum, covering 30 hectares (about 60 football fields) dotted with more than a century’s worth of sculpture from Rodin to contemporary artists. Over 500,000 visitors a year head out here to stroll around the wooded parkland or relax in its atmospheric cafe or on the summer terrace. The permanent collection of over 400 works includes pieces by Henry Moore, Alexander Calder, Barbara Hepworth, the Dutch collective Atelier Van Lieshout, Tony Cragg, Ai Weiwei, Antony Gormley and many others. 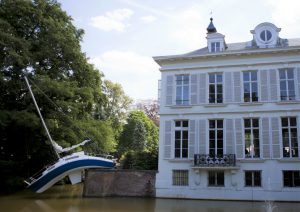 Take the train to the Antwerpen-Berchem Station in the Zurenborg neighbourhood in southeast Antwerp, where you will find some of the finest examples of Art Nouveau architecture anywhere in Europe. Look for the “Golden Triangle” of streets formed by Waterloostraat, Transvaalstraat and Cogels Osylei. 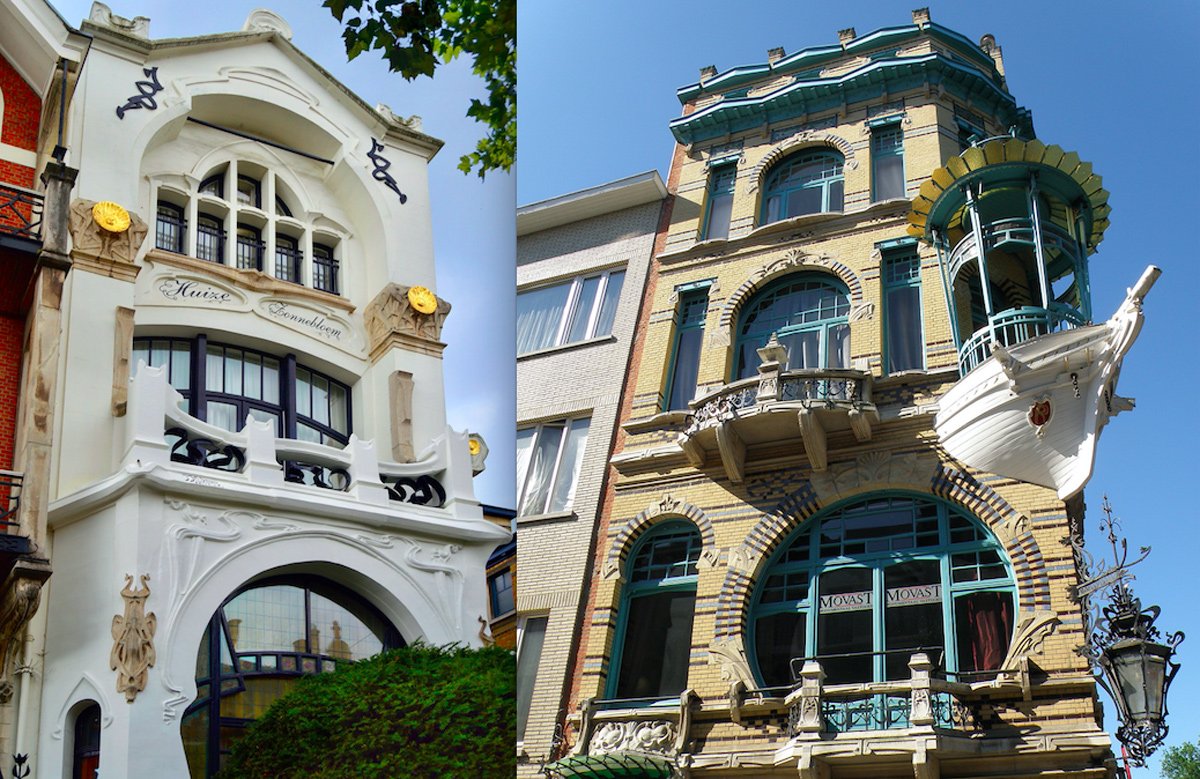 Antwerp’s five monumental churches were important clients for Rubens and his contemporaries. Taking almost 170 years to complete, the majestic Cathedral of Our Lady is the largest Gothic structure in the Low Countries and contains four works by Rubens. St Paul’s Church boasts over 50 paintings by Antwerp masters such as Rubens, Van Dyck and Jordaens as well as over 200 sculptures, Baroque altars and sculpted furnishings which are among the most beautiful in the world. St Andrew’s Church contains many artworks by Antwerp’s leading artists. Rubens worked as a painter, decorator and architect in the St Charles Borromeo Church and his final resting place is St James’s Church, where his The Virgin Mary Surrounded by Saints decorates his specially built chapel. There are also paintings by Jordaens and Van Dyck and no fewer than 23 marble altars. 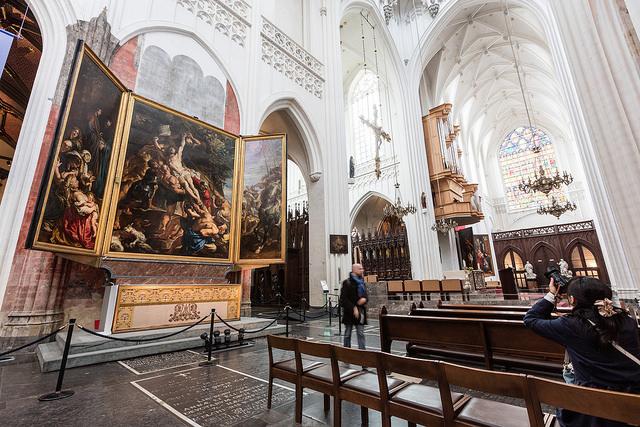 The largest Gothic structure in the Low Countries, the Cathedral of Our Lady contains four works by Rubens