In the country with more art activity per capita than any other in the world, Amsterdam leads the way 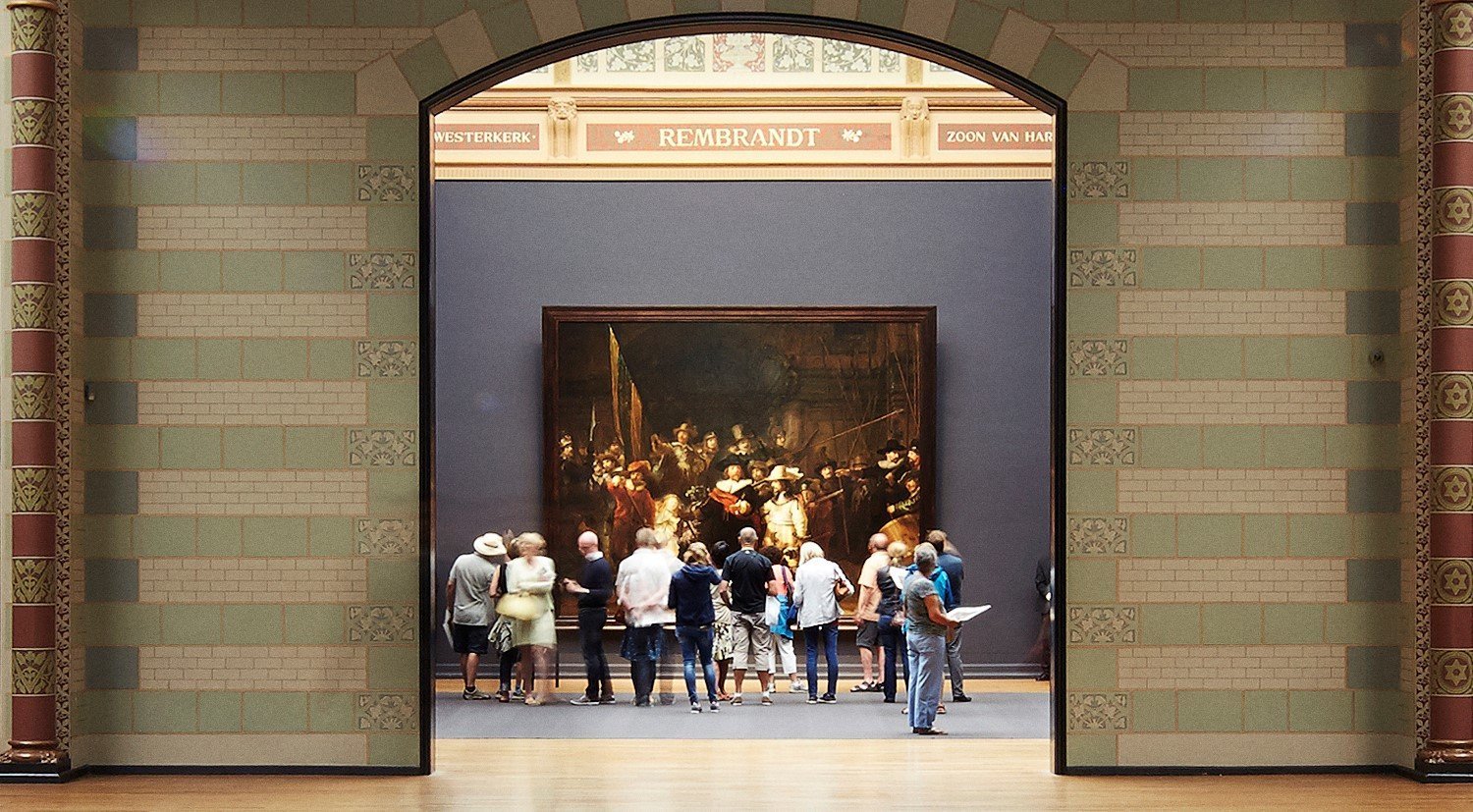 Explaining why Amsterdam puts substantial resources into marketing itself as an art capital, a former Deputy Mayor said: “It’s an investment not only in visitors, but also in the quality of life. You don’t concentrate on the cost, but on the benefits. Amsterdam floats on arts and culture.”

Conveniently, the “big three” Amsterdam art museums are clustered within a couple of hundred metres of one another on the fringes of the Vondelpark, the city’s largest open space.

The Rijksmuseum (Imperial Museum) is one of the world’s great national treasure-troves and worth a whole day, if you have the time. No fewer than 80 halls house 8,000 items detailing 800 years of Dutch art and history. It is especially renowned for its collection of 17th century Dutch masters. Many art-lovers head for the second floor, where the “Wow” factor stops them in their tracks upon entering the magnificent Gallery of Honour. At the far end of a wide avenue lined with display alcoves hangs the museum’s centrepiece artwork, Rembrandt’s giant painting The Night Watch (1642), lording it over the crowd constantly clustered in front of it.

The artist’s most famous and monumental painting, it depicts an Amsterdam militia. Taking nine kilos of paint to complete, it hung at one time in the Amsterdam Town Hall. Before that, it was even bigger, but because it did not fit in the intended place, a section was trimmed off! The Rijksmuseum possesses the largest collection of Rembrandt paintings in the world. It is also the most representative, with works from throughout his career.

Across the park, the Van Gogh Museum is home to the world’s largest collection of Vincent’s work, from his brooding, early palette depicting Dutch peasant life to the explosion of colour in Provence in the late 1880s.

They’re all here: The Yellow House in Arles that he briefly shared with Paul Gauguin, The Bedroom he occupied there, the Sunflowers which decorated it and the brutally honest self-portraits, including with bandaged ear after a particularly psychotic episode when he mutilated himself.

Just up the street and completing the trio of powerhouse art institutions in the ‘Museumkwartier’ is the Stedelijk Museum of Modern Art, which houses over 100,000 contemporary works, including paintings, sculptures, prints, drawings, photographs, graphic design, applied arts and new media. All the major modern movements are represented, from Minimalism, German Expressionism and Bauhaus to Impressionism, Abstract Art, Conceptualism and Pop Art. Featured artists include Mondrian, Warhol, Chagall, Kandinsky, Cezanne, Picasso, Matisse, Lichtenstein and many more.

Entering by a grand staircase, you can’t miss Dan Flavin’s light installation, Green and red, inspired by Mondrian, but composed of that artist’s two least favourite colours. Do seek out Edward Kienholz’s The Beanery (1965), a faithful, two-thirds scale reproduction of the artist’s local bar in Los Angeles complete with realistic smells made from the artist’s recipe for ‘odour paste’ combining beer, rancid fat, urine, mothballs and cigarette ash.

Dating back to 1895, the Stedelijk has been held dear in the hearts of Amsterdamers for generations as both an art gallery and a meeting place. A 2012 extension opened by Queen Beatrix on national TV resembles a giant, upturned sink (dubbed “the bathtub” by locals) and has enabled the Stedelijk to mount the largest display ever of its permanent collection.

For a closer insight into Rembrandt’s life in Amsterdam (he moved there from his home town of Leiden in search of fame and fortune), head for the Rembrandt House, where he lived and worked between 1639 and 1658. With a 17th century inventory as a guide, the house has been meticulously refurbished with furniture, art and objects from the period. These include many odd artefacts (a stuffed armadillo, anyone?) for which Rembrandt had an insatiable appetite, the purchase of which contributed to his being declared bankrupt in 1656 along with a tangled love life which required him to pay the equivalent of alimony and, crucially, a change in taste which made his artistic style less fashionable and thus lowered demand for his services.

The house holds a virtually complete collection of Rembrandt’s etchings, selections from which are on permanent display. There are also temporary exhibitions of work by some of his contemporaries and pupils along with Rembrandt-inspired work by contemporary artists. Demonstrations of etching and paint preparation show how Rembrandt and his apprentices worked (you can stand in the very studio where the great man painted), and visitors can try their hand at their own etchings. The house is as close as you can get to Rembrandt the man. You can’t even visit his grave. He was buried in a pauper’s grave and twenty years later, as was the custom, his remains were dug up and disposed of in an unmarked mass grave.

If it were in the city centre, the Cobra Museum of Modern Art would be one of the most popular attractions with art-lovers. As it is, located in the southern suburb of Amstelveen, it is missed by most visitors. There is a frequent bus service from several city centre points for the eight-kilometre trip.

A royal visit to the Cobra Museum of Modern Art

Famed for their primitive, spontaneous expression and range of materials, CoBrA artists are showcased in the world’s only museum dedicated to the avant-garde movement, which was active mainly between 1948 and 1951. The movement takes its name from the first initials of Copenhagen, Brussels and Amsterdam, the three cities from which its main proponents hailed.

Photography fans have two delights in store a short distance apart on the elegant Keizersgracht (Emperor’s Canal). Occupying two connecting houses, Huis Marseille was the first photography museum established in Holland. A former merchant’s house, it was built from new-found wealth and named after the city which helped the original owner attain it. Selections from the collection of museum-quality photographs are rotated every three months (to limit their time in sunlight), accompanied by a series of special exhibitions. Some of the period rooms have retained their beautiful, original ceiling frescoes.

Housed in a former concert hall, the Foam Photography Museum presents exhibitions of various photographic genres, such as documentary, art and fashion, by both well known and up and coming photographers. Notable shows have included retrospectives on Henri Cartier-Bresson, Richard Avedon and Helmut Newton. The museum also publishes the quarterly Foam Magazine.

From here it is a short distance to the Dutch Hermitage Amsterdam. Previously an outpost of the State Hermitage Museum in St Petersburg, it severed its ties with the Russian institution due to the invasion of Ukraine. Dating from 1682, the grand structure on the River Amstel operated as a retirement home until it was taken over by the city of Amsterdam and leased to the Hermitage. The museum shows temporary exhibitions of about six months duration. Recent selections have included jewellery from the Russian court and ‘outsider’ art by marginal creators working outside the mainstream art world.

Located on Warmoesstraat, one of the city’s oldest arteries in the heart of the red light district, the artist-run W139 is one of the city’s most original art hubs and an alternative experience to Amsterdam’s mainstream museums and commercial galleries. In between exhibitions you can usually wander into the huge space, formerly the warehouse of the nearby Bijenkorf (Beehive) department store, and watch artists create site-specific work to transform the space for forthcoming shows, with experimentation actively encouraged.

You can also catch temporary art exhibitions in two of Amsterdam’s most atmospheric churches. Dating from 1306, the Oude Kerk (Old Church) is both the city’s oldest building and youngest art venue. Since 2012, contemporary artists have been invited to create site-specific works which add a fascinating element to the historical setting. The church was built on a cemetery, and the floor consists entirely of gravestones. There are 10,000 souls under your feet, one of them Rembrandt’s wide Saskia. Dedicated in 1409, the Nieuwe Kerk (it’s over a century ‘younger’ than the Oude Kerk, so it’s the New Church!) on the central Dam Square hosts exhibitions of art, photography and culture, including the annual World Press Photo Exhibition.

Just across the Museumbrug (Museum Bridge) opposite the Rijksmuseum is the Spiegelkwartier, an area which has been the heart of Holland’s art and antique trade since around 1900. With Nieuwe Spiegelstraat as its spine (‘spiegel’ is Dutch for mirror, although the street is named after a former mayor of Amsterdam), it is perhaps unique in the world in having so many specialist businesses in such a small area – around 70 galleries and antique dealers. The Spiegelkwartier has both a geographical and commercial closeness with the Rijksmuseum, which acquired its first object there in 1913 and continues to purchase from dealers today.

Film fans may want to take the free commuter ferry from behind the Central Station for the five-minute crossing to visit the eye-popping Eye Film Museum, which seems to crouch like a gleaming white lizard (or is it a bird of prey?) overlooking the busy waterway. Outside a neon sign assures visitors: ‘Don’t worry, everything is going to be amazing’, while there is also a floating globe of the world which lights up at night. A permanent exhibition traces the evolution of the so-called ‘seventh art’ (after painting, architecture, sculpture, literature, music and performance) from early efforts with panoramas, magic lanterns, live sound, music and theatrical accompaniments to works which are sometimes referred to as ‘experimental cinema’, ‘expanded cinema’ or simply artistic cinema. It is also notable how over the past two decades the fringe area between film and visual art has gradually become less clearly defined. 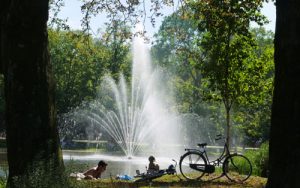 The Vondelpark is the city’s largest patch of open land, where strollers, roller-bladers and ballgame-players mingle amid ponds, wooded copses and terraced cafes to the tune of impromptu music sessions.